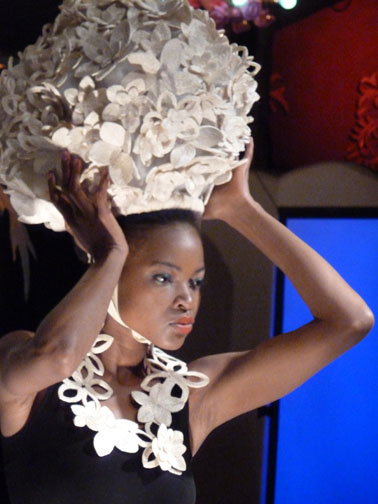 Last weekend I attended the Mustard Seed Africa Rural to Ramp fashion show at House on Fire, a popular live music venue on the way to Malkerns. The event was a stunner, highlighting the creativity of handcraft producers in the area, including Gone Rural, Quazi Design, Giraffe, Golden Hands, Imvelo Eswatini, Baobab Batik, Pachimana, Zuwa, Priestess and Lillian Jane Jewelry. Many of these organizations work with impoverished women, employing their handcraft skills and paying them fair trade wages. Even though Swaziland has been rated a  “lower-middle-income” country by the World Bank, poverty is rampant, and women are especially vulnerable in this patriarchal society (traditional social systems say they can’t own land, and access to education is poor.). According to the International Fund for Agricultural Development, IFAD, the wealthiest 10 per cent of the country account for nearly half of total consumption while 43 per cent of the population live in chronic poverty. What you see on the surface, good roads, shopping centres and grocery stores in the urban areas, is not the rural reality – where 84 per cent of the population lives.

House on Fire reminded me of an African House of Blues, full of whimsical decorations and devoted to good sounds. Last Saturday it was sound and sights. 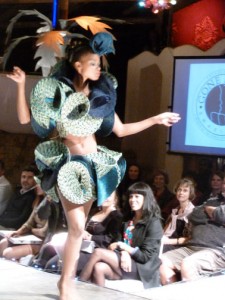 Who knew that woven grass mats could be so chic. 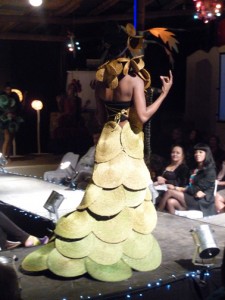 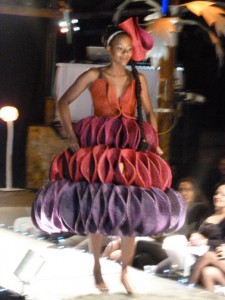 Gone Rural, where my friends Camille, Isabel and Becky work, specializes in woven grass tableware – placemats, floor rugs, coasters and the like — available at 10,000 Villages in Canada. I was very curious what they would do at a fashion show. It was amazing. The placemats were folded, cut, and layered to create Alice in Africaland fantasy gowns. Not that you could ever really wear any of these get-ups – I imagine they’d be a tad scratchy, but what eye candy…and so chic! 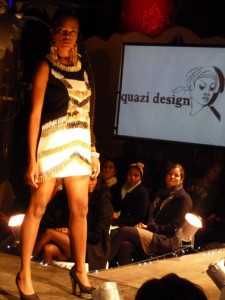 My friend Haley works for Quazi Designs. This dress is accentuated with gold beads made of recycled paper.

Other participants designs included lacy crocheted shawls, dresses dangling with golden beads made of recycled paper, and head gear that looked like it came from another planet.

The showcase pushed boundaries that I didn’t know could be pushed. It was African, but otherworldly, and all for a good cause. Not only did it raise the profile of some of Swaziland’s finest designers, it raised money for the Mustard Seed Africa Health and Wellness Day for Handcraft Artisans, which benefits at least 300 women (urban and rural) from the participating organizations. The money will go to medical checkups for them, plus education on breast cancer and HIV/AIDS. 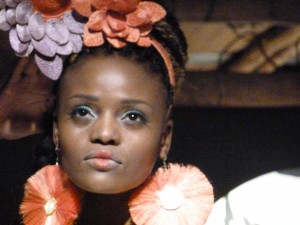