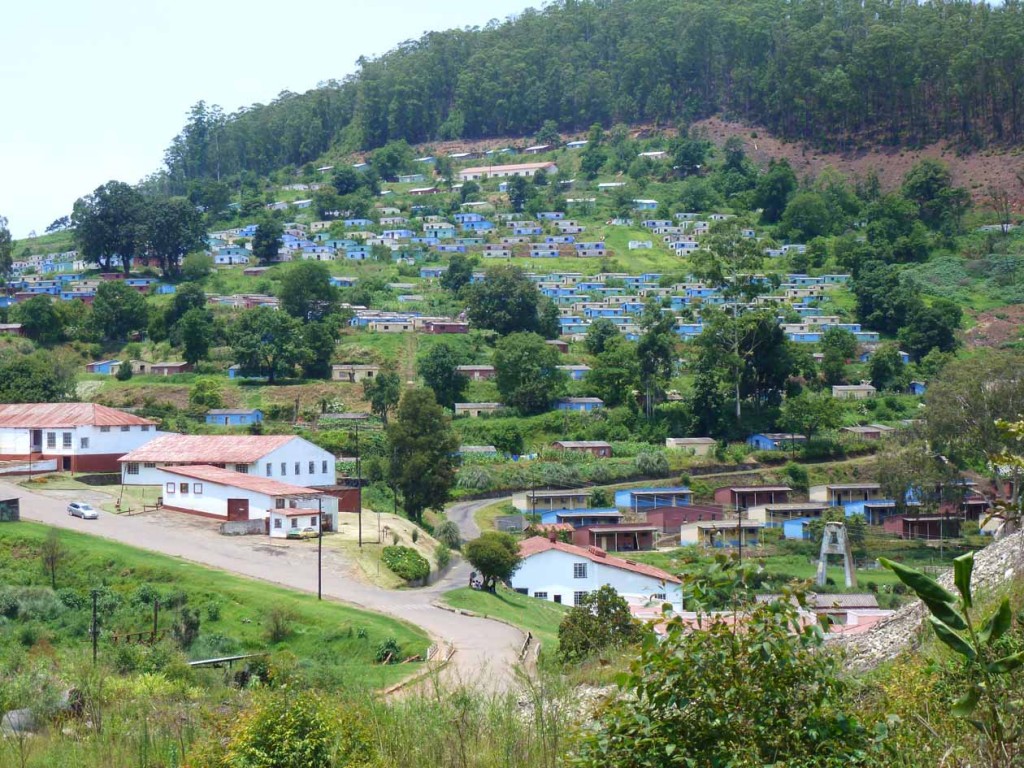 A mining town that was first build in the 1930s, Bulembu has the feeling of a place lost in time.

Recently, I had a wonderful, magical time in a place called Bulembu, located in the northern Hhohho region of Swaziland, 18 km west of the town of Pigg’s Peak. The steep, gravelly, 18 km road requires a 4×4 vehicle, so the place doesn’t get a lot of visitors. Built in 1937 by British asbestos mining company Turner & Newall, the 1,700-hectre-town of 10,000 people was a bustling hive of activity until the mine shut down in 2001.

In it’s prime, Bulembu employed 4,000 at the mine and the community swelled with families and other businesses. Nestled in the soft green hills of the Hhohoho region,  it had the feel of a forgotten Alps village. Blue, yellow and red worker’s cottages dotted the hills. A large white building that once housed administrative offices had been converted to a handicrafts centre. A faded Bulembu Groceries sign showed where the population used to stock up on staples. A cracked, concrete basketball court lay at the foot of a mound of tailings in the centre of town. 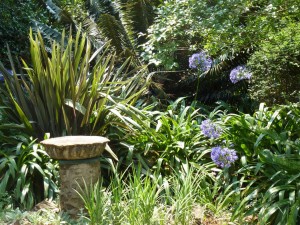 Despite some frayed edges, Bulembu was not an uninhabited ghost town. The lawns were neatly clipped. Cheerful Shasta daisies, fragrant pink roses and sapphire blue agagapathas waved from English-style gardens. The Bluembu name and shield logo were freshly painted onto the sides of many buildings, indicating a honey processing plant, dairy, water bottling plant, sawmill and hospitality training centre. The former mine manager’s house had been transformed into a tourist lodge, schools offered primary and secondary education, churches called the faithful, and a bakery filled the air with the scent of fresh-baked bread. 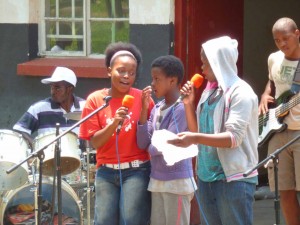 After the mine shut down, the town became a desolate and bleak space, especially for the many Swazis who depended on it for their livelihoods. In 2004, however, a team of Christian entrepreneurs and social developers breathed new life into the community. They created a haven for 300 orphans, in response to the devastation caused by HIV/AIDS in Swaziland. (With the highest incidence of the disease in the world, a whole generation of parents has been wiped.) The pool, that once serviced the mining community, rang with the excited shouts of children and I was told the cinema was now used for special movie nights.

Digging around on the internet, I found a couple of newspaper articles about Bulembu. They noted that Bulembu Ministries is the engine that runs the town. The man behind the rebirth is Volker Wagner, a Vancouver-based Christian social entrepreneur who made millions in the printing and marketing business. One of Canada’s richest men, Jim Pattison, also a born-again Christian, gave the initial $1.5 million to establish water, sewage and electricity infrastructure. According to the newspaper articles, it cost a cool $9 million to get the place up and running. Wagner stated there was no proselytizing in Bulembu, but there no quibbling about the Christian focus of the project. A donation appeal card that I picked up in the museum confirmed this, stating, “Bulembu is a not-for-profit organization serving Jesus Christ by restoring hope to the people of Swaziland through community enterprise and community care.”

While I was there, I met people from the surrounding communities who were employed in the town’s various enterprises, including the lodge, which had guest rooms and a restuarant in the former manager’s house, self-catering options in four former senior management homes, and a hostel dormitory. Staff, who were graduates of the community’s hospitality training centre, were courteous and extremely helpful. Everywhere I went I was greeted with smiles and handshakes. 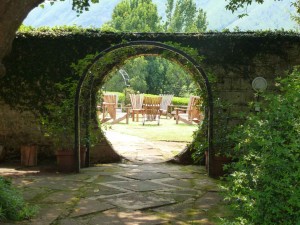 Lovely terrace at the main lodge.

I was traveling with my friend Isabel and we opt to stay in Hyde Park, a self-catering cottage with full kitchen, living room, dining room, two bathrooms and four bedrooms. There was even a working fireplace since winters get quite chilly. We had it all to ourselves for E362 ($45 Cdn) each per night. It was clean, bright and extremely spacious. We slept like babies that night. Dinner and breakfast were in the main lodge since we did not come equipped with groceries. The dinner set menu featured roast chicken that night, but we could also order from a lighter menu that offered pizza and salads. At breakfast there was a choice between a hot menu with eggs, bacon and sausage or a lighter cold breakfast with cereal yogurt, fruit, juice, toast, coffee and tea.

Visitors can hike, bike, shop for handicrafts or take a tour of the town. We enquired about a tour. “It won’t be possible right now,” lodge manager Sibusiso Magagula informed us. “We had a guide, but he was defrauding us. We are in the process of finding another one.” 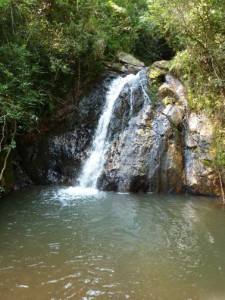 Went swimming in this beautiful spot, just a 15-minute hike from the lodge.

Instead, we walked down to the museum, just around the corner from the lodge. Admission was E20 ($2.50 Cdn.) The sign noted that it covered Swazi history, mining and colonialsm. Open for about four months, the museum was filled with old mining apparatus, as well as the accoutrements of daily life. Equipment from the clinic, desks from the original classrooms, an intact office complete with manual typewriter, trophies from town sports competitions and mineral samples of serpentine and asbestos gave visitors a vivid picture of Swazi history, geology and mine life. Curator Bob Forrester has done an excellent job with time lines and history. The wall plaque explanations were careful, full of context and neatly pointed out how colonialism created white elites and treated local peoples as children.

I learned that in the late 1800s after the gold ran out, the mine lay abandoned. In the process of digging for gold, asbestos was discovered, but there was no market for it. That changed at the start of World War Two when asbestos was used for multiple purposes, including brake pads and fireproof textiles. The asbestos mine ran continually for more than 60 years and they say there is still enough of the mineral to keep it going. One descriptive plaque noted that in 2001 the Swazi government demanded bribes for the annual operating license. This was the first time they had done this. The mine refused and it shut down. Reading between the lines, I believe there were probably a few other reasons for the closure. Turner & Newall went bankrupt in 1991 and the company that took over the mine went into liquidation in 2001. Class action suits against asbestos mining companies were happening at that time and likely influenced the decision. The history recounted in the museum noted that after the mine closed down an American law firm placed ads in Swazi newspapers asking former employees who had suffered from asbestos-related health conditions to step forward for a class action suit. Apparently nobody did.

These days there’s still a big hill of chrysotile asbestos tailings in the middle of town. According to the museum, air checks have been done and have come up clean.

My fingers are crossed that this is true, because Bulembu seemed more like a slice of heaven than a health hazard. It’s hard to predict the future for the town and its residents, but I can only wish the best for them. From a bleak place full of despair, Bulembu has become a testament to hope.

This entry was posted in Humanitarian and tagged Bulembu, NGOs, Swaziland. Bookmark the permalink.