Posted on March 5, 2016 | Comments Off on Fetish Priests, Mermaids and Evangelicals 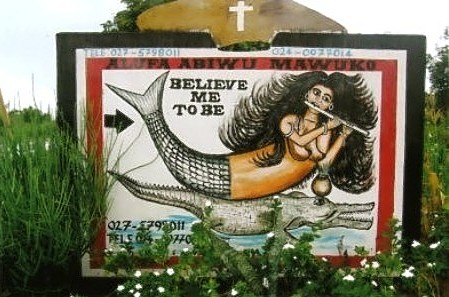 Cindy, our cleaning woman, became a good friend while I was in Accra. She is 24 and her family is originally from Togo, but she was born in Ghana in the Volta Region. She gave me insight into Ghanaian culture, especially about church, traditional healers, fetish priests and shrines.
People go to a fetish priest (“abosam”), she told me, when they want something – good grades, to snatch someone else’s husband, more clients at their fruit stall.
“There is a young girl I know. Some boys were asking her to go with them, and she said no. I am not like that. School is important to me. So the boys went to a fetish priest. She went to school the next day and she really smelled bad. But she didn’t smell at home. So she can no longer go to school. When the boys see her they point and laugh.”
Taking people down a peg or two is a regular thing. “In Ghana, they don’t like it if you get ahead. A young man who lives near to me was doing very well at his job. He got promotions and was happy. But his co-workers didn’t like that. They went to the fetish priest and got something to drop on his chair in the office. He began doing very poorly. He lost his job and he almost died. I still see him sometimes,” said Cindy.
Then there is the type of magic performed in the Volta Region. When I was there, I saw a number of signs by the road advertising “healers” with crude pictures of mermaids. “We call the half woman, half fish a ‘mami wata.’ They are creatures that live in the river and they can do you harm. Did you hear about Castro?” Cindy asked. Castro was a famous Ghanaian “Hiplife” musician who died in 2014. He had gone to a resort near Ada and was out on a jet-ski with his girlfriend. No one is sure what happened, but they both drowned and their bodies were never recovered. “They say he went to the abosam to get help with his career and the mami wata got him as payback. Some people believe he lives under the water and will be back in five years. Even his family wasn’t too concerned,” said Cindy.
There is a huge evangelical movement in Ghana, but under the surface bubble African traditional beliefs. Many self-pro-claimed pastors go to abosam to increase their popularity, Cindy told me. One famous abosam is Nana Kwaku Bonsam, who lived in NYC for a year. Being a pastor in Ghana is akin to being a rock star/movie star. Big name performers can draw thousands and reap substantial incomes in the way of donations. It is an aspirational vocation, not simply a calling. Unlike a concert, there is no ticket fee for these marathon evenings of God channeling. But when the donation buckets come out (a few times) people line up to drop in their envelops.
Belief in higher powers, lower powers and other worldly powers is big in Ghana.

This entry was posted in Destinations. Bookmark the permalink.