Posted on July 20, 2018 | Comments Off on Saskatooning: My Surprising Cultural Journey 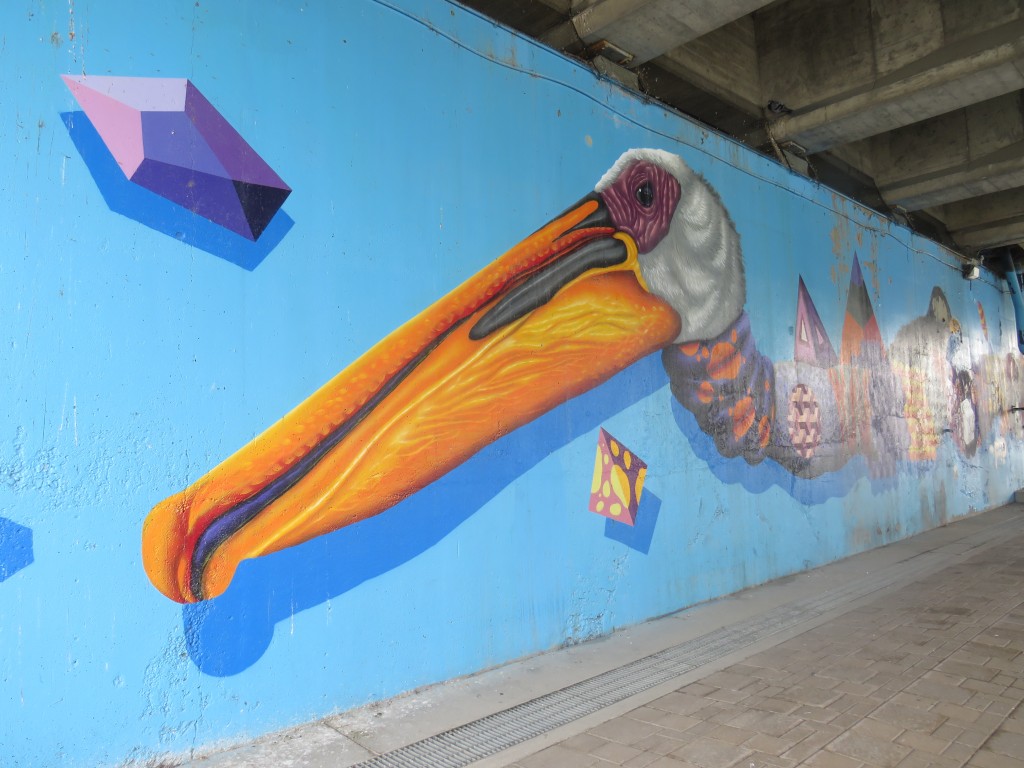 On a recent trip to Saskatoon I really wanted to dig into the city’s culture. What made it tick? This prairie city has been getting a lot of attention lately. The New York Times said it is one of the top places to visit in 2018 (the only place in Canada of the 52 destinations listed). Following is my cultural journey. I had no idea what to expect. And boy, was I pleasantly surprised!
Joni Mitchell
A little before I arrived, on June 10, a portion of the riverfront along the South Saskatchewan River was formally dedicated to Joni Mitchell. It’s called Joni Mitchell Promenade and that’s where I found a plaque that told the story of her connection to the city. 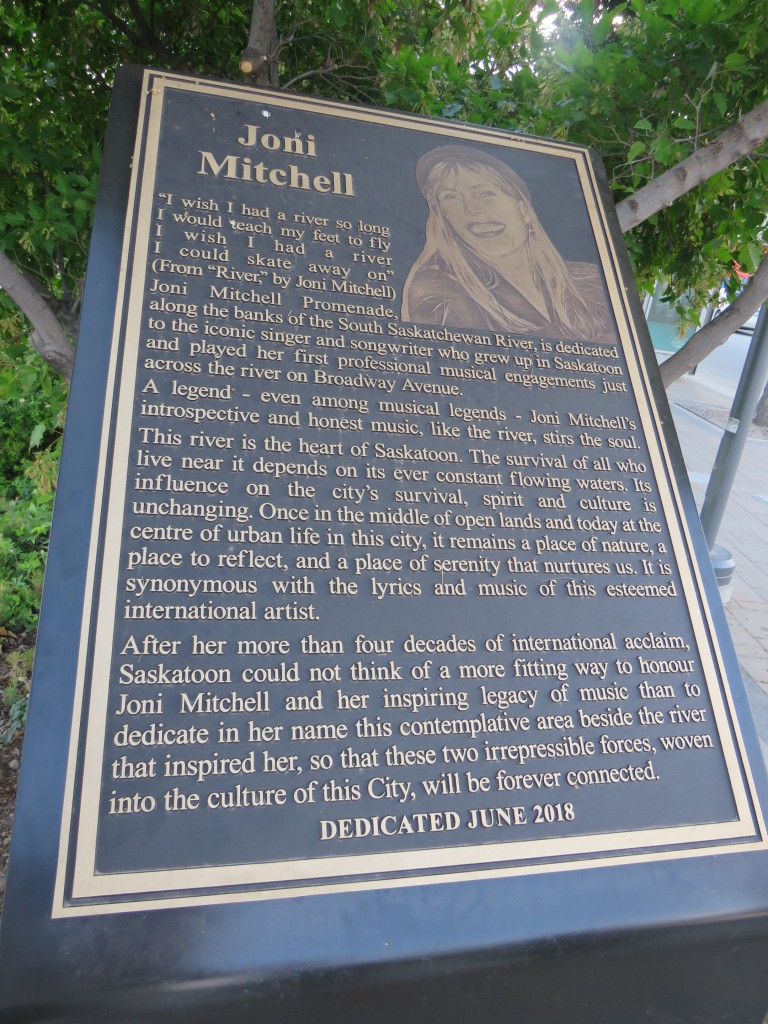 Although she was born in Fort Macleod, Alberta., the singer/songwriter of timeless tunes such as Big Yellow Taxi, Both Sides Now and Free Man in Paris, grew up in Saskatoon and started her musical career there. Crossing the Broadway Bridge (one of seven magnificent structures that span the river), I spied another plaque in front of the Broadway Theatre, next to where the Louis Riel coffee shop once stood on Broadway Avenue. That’s where she played her first professional singing gig to earn what she called “smoking money.” 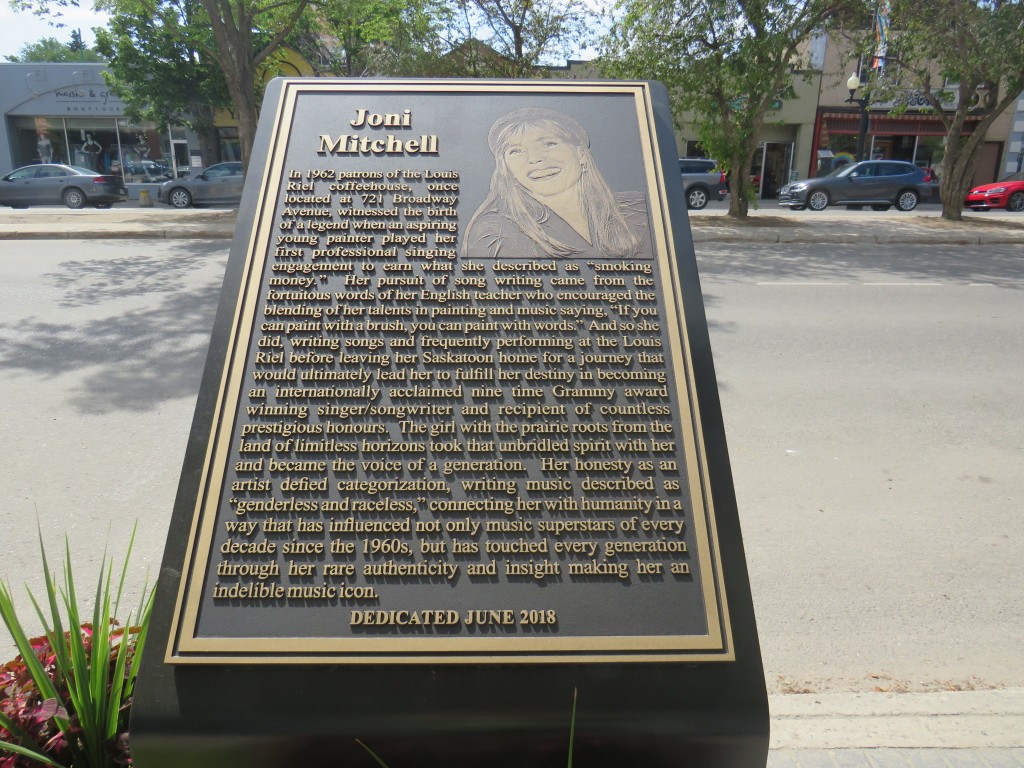 Joni walked that same bridge countless times and was inspired by its view of the river, as well as the grand old dame that is Saskatoon’s signature landmark. Take a look at the cover of her album Clouds and you’ll see her drawing of the majestic Bessborough Hotel, sitting on the shore of the waterway that inspired her hauntingly beautiful song River. 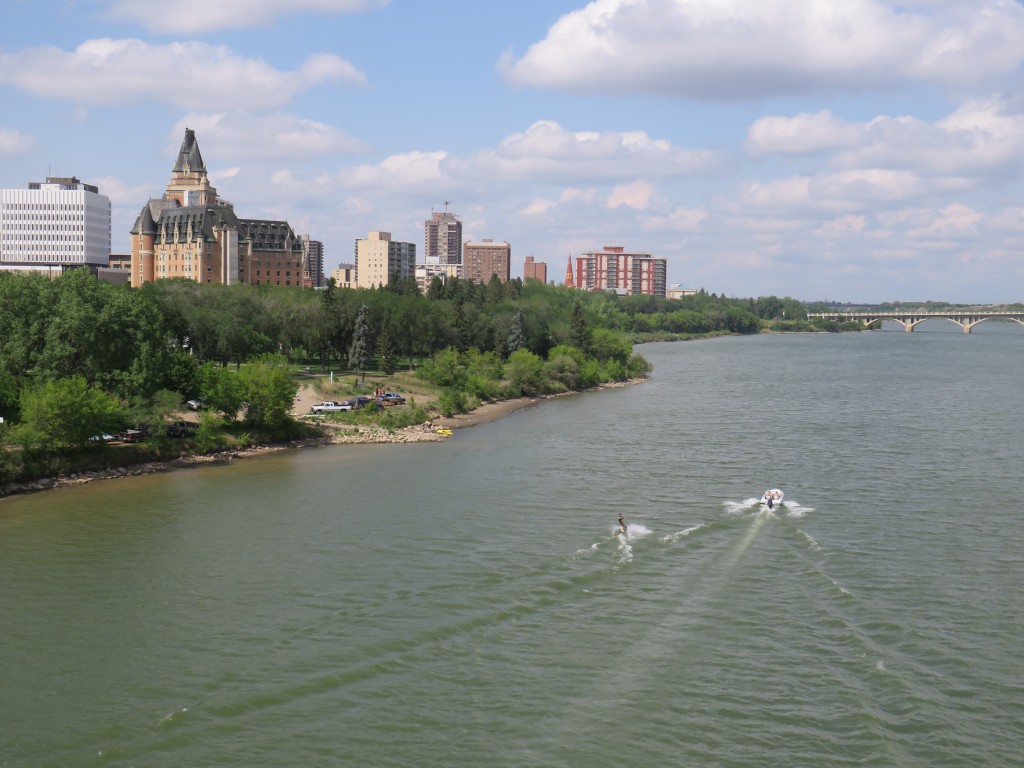 Remai Modern
Wow. This place knocked my socks off. The Remai Modern is a new modern art museum that opened October 2017. 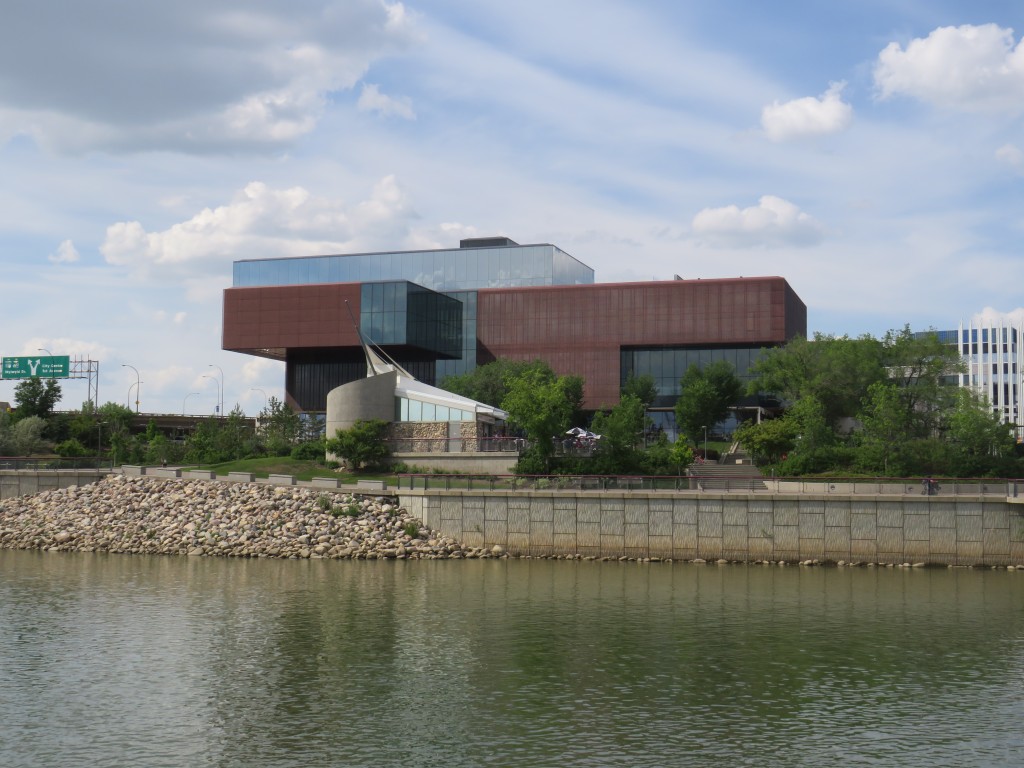 The building, which cost more than $100 million to construct, was designed by renowned Canadian architects KPMB. The design received an Award of Excellence from Canadian Architect magazine in 2012, before construction began. Looking at the exterior, I could see an intricate grate over the windows that functioned to keep the building cool in summer and warm in winter. The colour scheme was the same as that of the Bessborough Hotel – a rusty brick-red earth tone. Inside there were many galleries in it of varying sizes that allowed you to get up close to the art. What the Remai is probably best known for is having the world’s largest Picasso linocut collection, as well as some of his ceramics. Only a handful of the 407 Picasso linocut prints were on display. 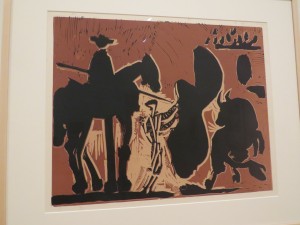 Lorna Conquergood, a program guide, told me many of the prints were originally done as posters for bullfights. “The printer kept all the original plates and when he died a U.K.-based dealer originally from Saskatchewan bought the entire collection and then sold it to Ellen Remai, who donated it to the gallery,” she explained. The gallery is named after the Remai family that made its money in the construction industry. There were many interesting installations such as a wall of beaded blue curtains, venetian blinds in the reception area and a wall of SAD lights called Lucky Charms. 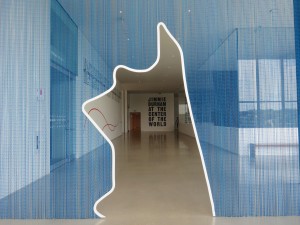 There was also lots of iconic Canadian art by Emily Carr, Lawren Harris, Jean Paul Lemieux, Arthur Lismer, David Milne, and A.Y. Jackson.
You can try your hand at being creative with a number of workshops held the third Tuesday of every month. I attempted to make a block print (sort of like a linocut print except the block was sort of a soft spongy material). 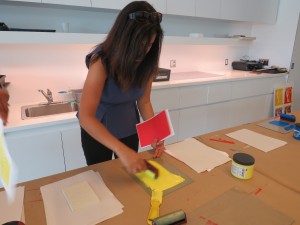 Other workshops offered were plein air painting and red willow weaving.
Looking out at the river, through the gallery’s huge plate glass windows was an area called River Landing where kids played in a splash pad, cyclists wheeled by and unbelievably, a wild rabbit hopped by. 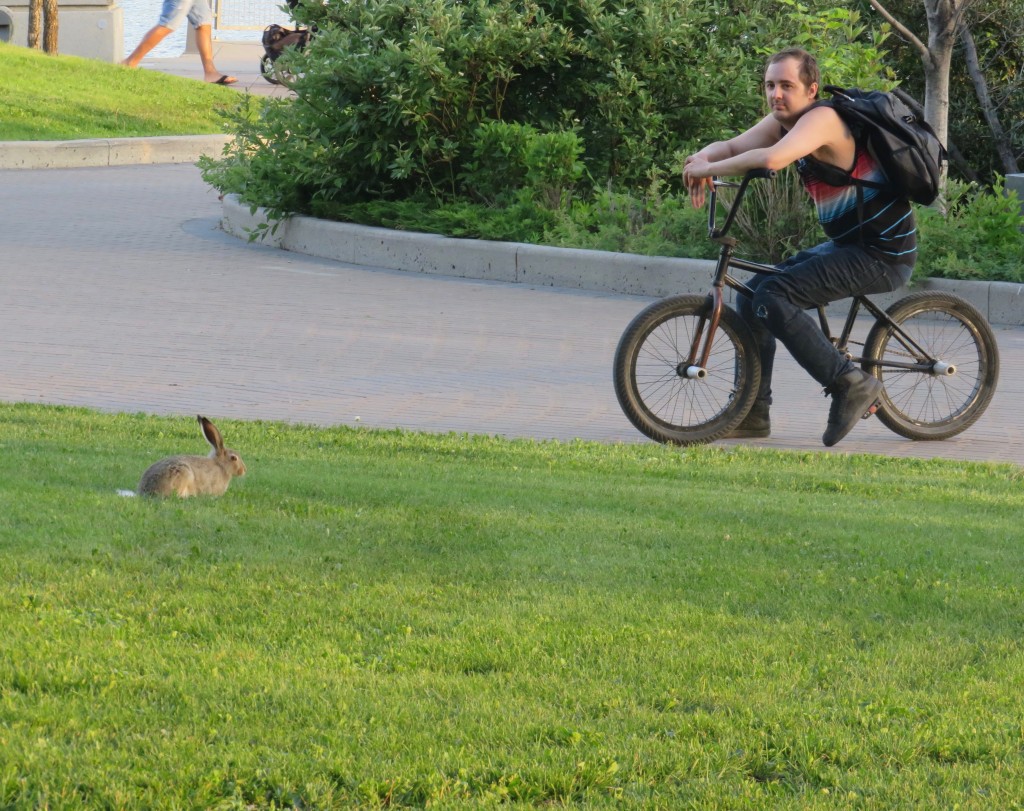 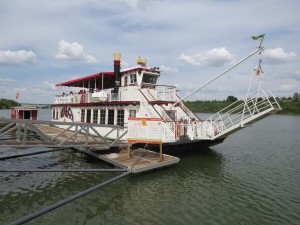 It was wonderful to get a whole different perspective of Saskatoon. One highlight was seeing the Bessborough Hotel (where I was staying) from the water. 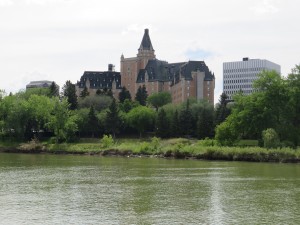 The hotel opened in 1935 with 225 rooms, and the ship’s tour guide told us it has 32 gargoyles and decorative touches including a bumble bee, moose and beaver. The one-hour cruise cost $25 and they had a bar on board where you could get the signature Prairie Lily drink of spiced rum, orange juice and grenadine. 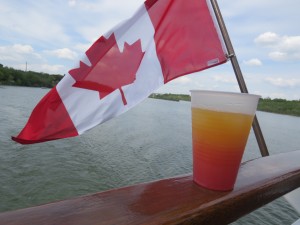 Speaking with owner Joan Steckhan, I learned that she and her husband Mike bought the boat from an operator in Laughlin, Nev., and started the cruises in 2012. Mike, having been in the navy for 27 years, was a handy captain. “We do three cruises a day, including a dinner cruise, from May to October. Birthday, anniversaries and weddings are popular. We even had a citizenship ceremony on board the other day,” Joan said.
Western Development Museum
The long, low building of the Western Development Museum was a treasure trove of prairie paraphernalia. 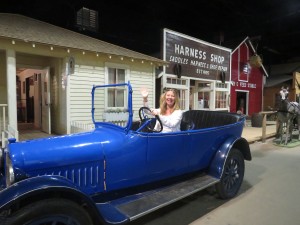 The provincial government started the museum in 1949 because after the second world war, there was a huge demand for steel. “Americans were coming up and melting down our old equipment. The government wanted to collect the machinery to preserve our heritage,” Jason Wall, the museum’s general manager, explained. 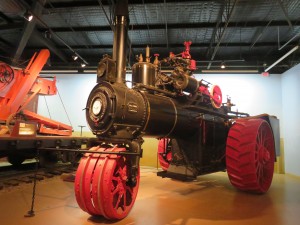 Along with tractors and fire trucks, there was an amazing 1910 Boomtown section with replica shops, stables, homes, school, plus an original church. I loved the innovation gallery and the straw gas car of 1918 with its huge, hovering methane balloon. 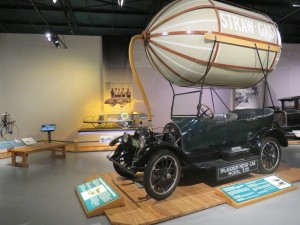 Sova Design
Sherri Hrycay is a local maker who studied the art of hat making with one of the milliners to the late Queen Mother. Her little shop in the City Park area was chock full of feathery, flowery summer designs as well as fur felt fedoras. 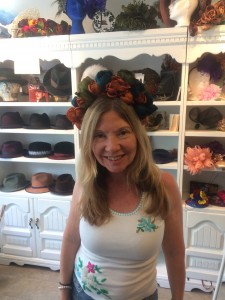 “This is a testament to how far a woman will go not to teach school, “ she joked. Primarily self-taught, she has taken a number of master classes overseas, including one with a milliner to the British royal family. “I’ve always had a love affair with hats,” she admited.
Wanuskewin Heritage Park
Shortlisted for UNESCO world heritage status, Wanuskewin Heritage Park sits above Opimihaw Creek and the South Saskatchewan River near Saskatoon – a window into a part of Canada’s history that remains largely undiscovered. 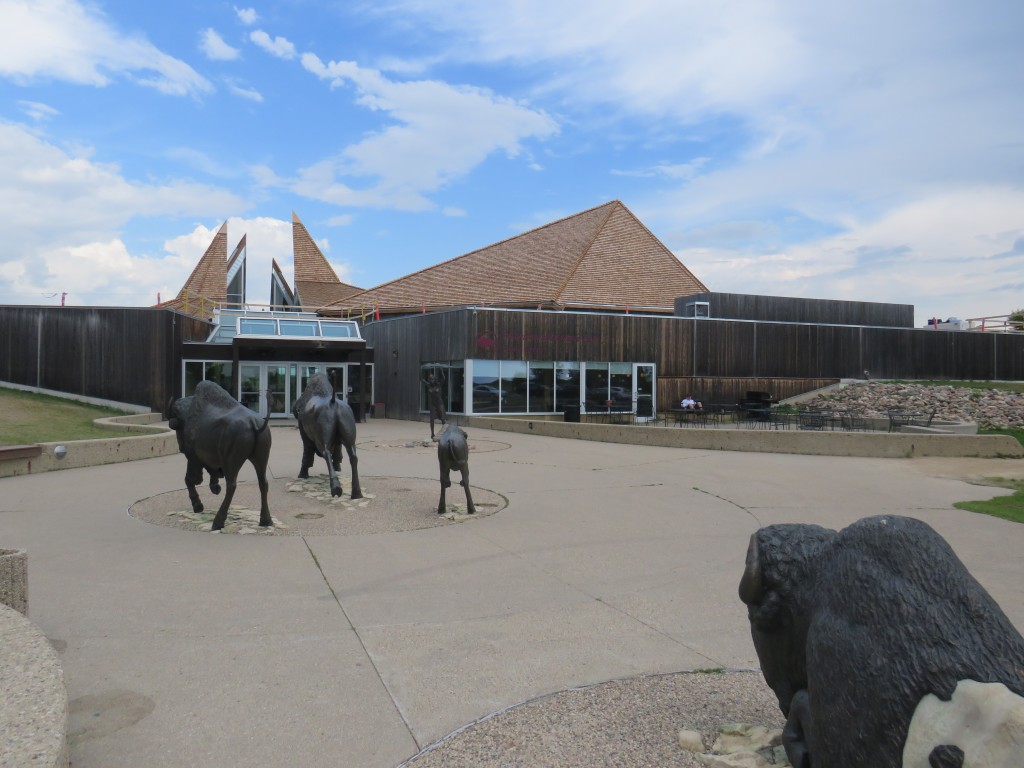 In the visitors’ centre I joined a group of school kids and witnessed an amazing performance by Metis hoop dancer Lawrence Roy. 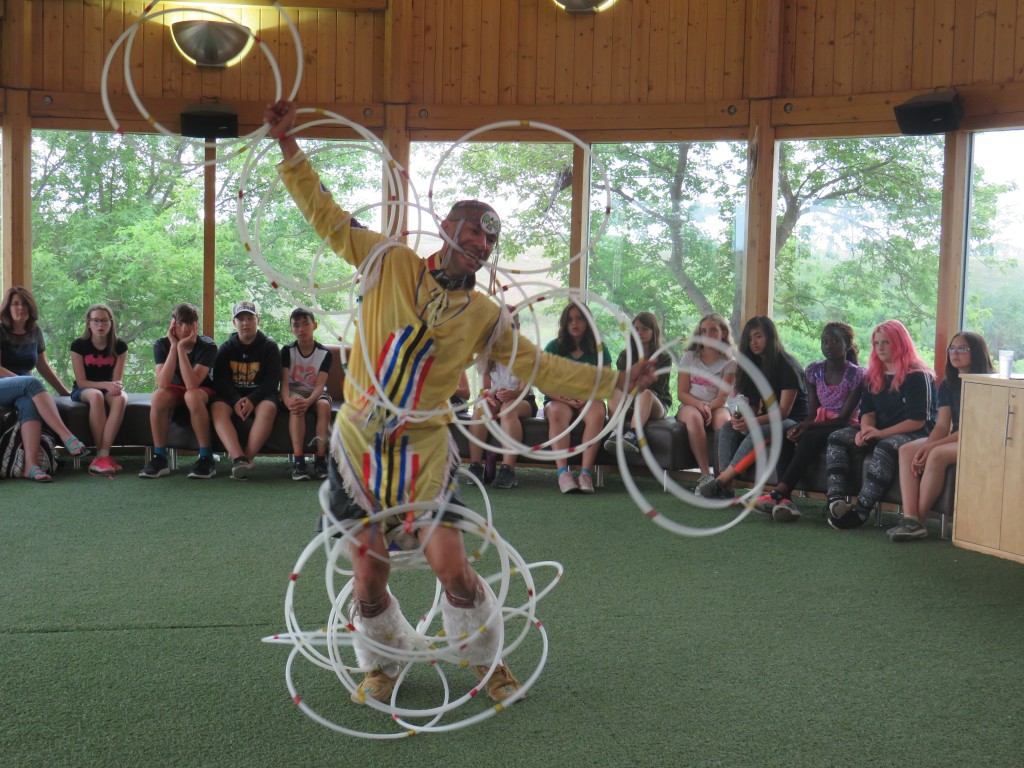 Afterwards, Lawrence let us try out some of his tricky moves. Wanuskewin is the site of Canada’s longest running archaeological dig site (40 years!), which provides a glimpse into the area’s 6,000+ year human history. Bones, teeth, tools and pottery shards are scattered throughout the valley behind the centre and our guide Andrew Mcdonald, the site’s sales and marketing manager, told us there were also two buffalo jumps. “There is no other site in the world with such a concentration of Northern Plains indigenous culture,” he said. I also learned that in three years the site will be welcoming a herd of 50 bison, relocated by Elk Island outside Edmonton. 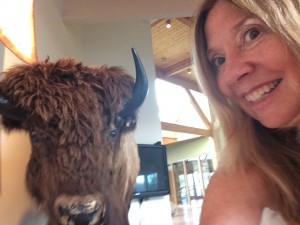 “They are direct descendants of the last 1,700 animals left on the plains. At one time there were 40 million, but they were killed almost to extinction.” If you want an unusual overnight experience, there are teepees you can stay in and an indigenous interpreter will share stories around the campfire. 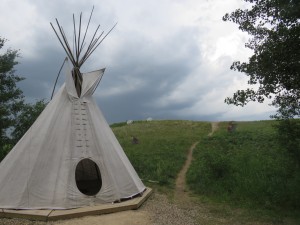 SaskTel Saskatchewan Jazz Fest
The SaskTel Saskatchewan Jazz Fest is one of the largest festivals of its kind in Western Canada. The multi-venue, 10-day festival annually brings out nearly 80,000 fans to enjoy the sounds of world, pop, jazz, blues, and funk music. This year the headliners on opening night were The Flaming Lips at the Bessborough Hotel stage. Giant inflatable robots, rainbow unicorns, air guns bursting with confetti, and, of course, Wayne Coyne’s galvanizing vocals made the show a head twirler. 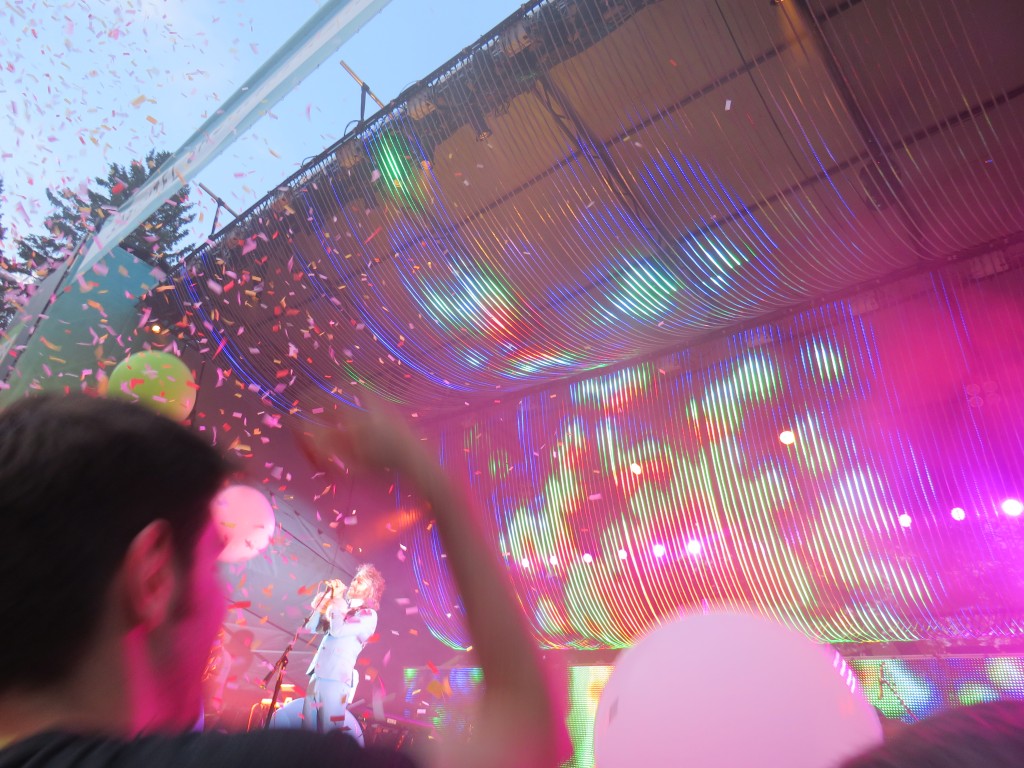 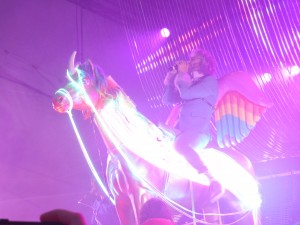 Riversdale Neighbourhood
We started the morning with a walk along a portion of the 80km of riverside trails and then headed to Riversdale. Once a rather sketchy part of town, Tourism Saskatoon’s Aviva Kohen told me the recent renaissance has been nothing short of amazing. “With new local creative businesses opening their doors, arts groups setting up shop, and an eclectic mix of people, there is something for everyone,” she explained. 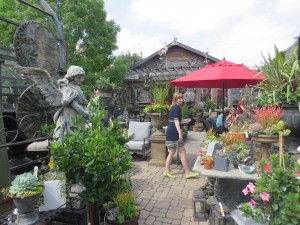 Locally designed t-shirts filled the shelves of Hardpressed Studio, a hyper-proud independent prairie venture. At Last Shoes owner Adam Finn explained how he had gone from ceramics to shoemaking. 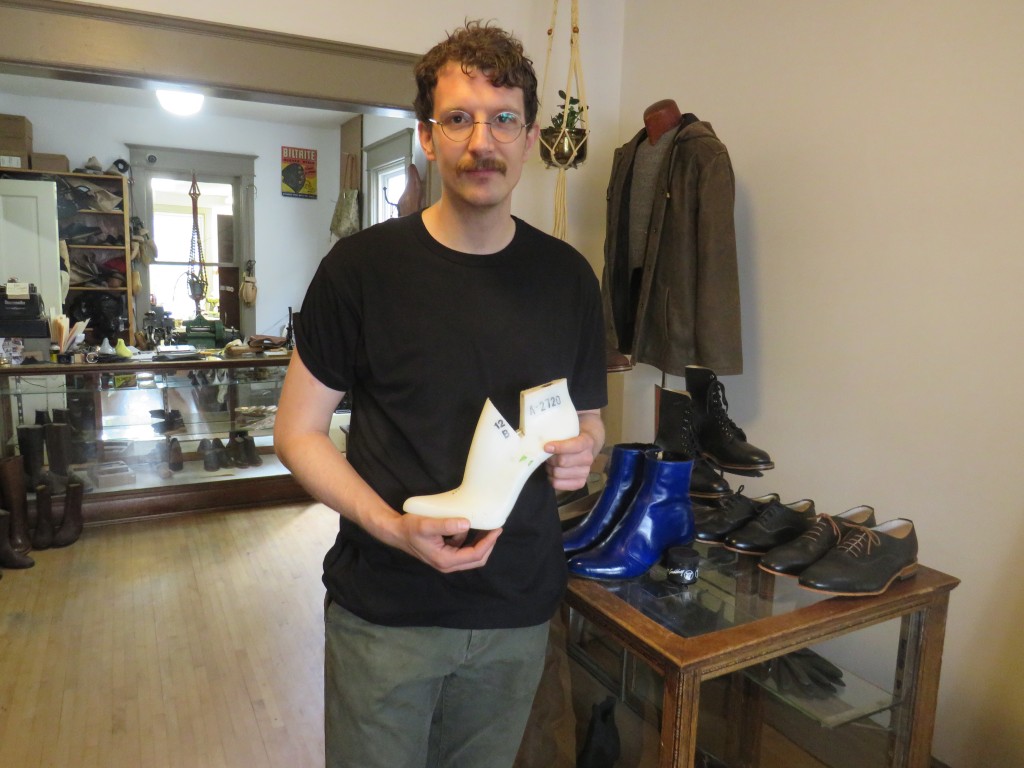 “The ceramics market is over saturated. It’s too hard to make a living. I wanted to learn a craft that involved form and function and where I’d have relationships with my clients,” he explained. After apprenticing with a shoemaker in Montreal, he polished up his skills with instruction from a boot maker to the Swedish royal family. Finn’s shop was filled with his handmade boots, brogues, mules and pumps. He told me his clientele is varied and eclectic, including bikers, battle re-enactors and drag queens. 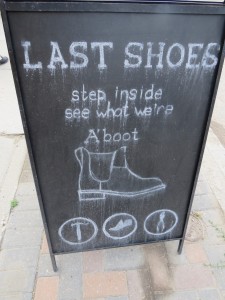 Pride
Saskatoon is the home of HMCS Unicorn. I thought the city’s Canadian Royal Navy shore-based reserve division was simply getting on board for the Pride celebrations, but that name is for real. 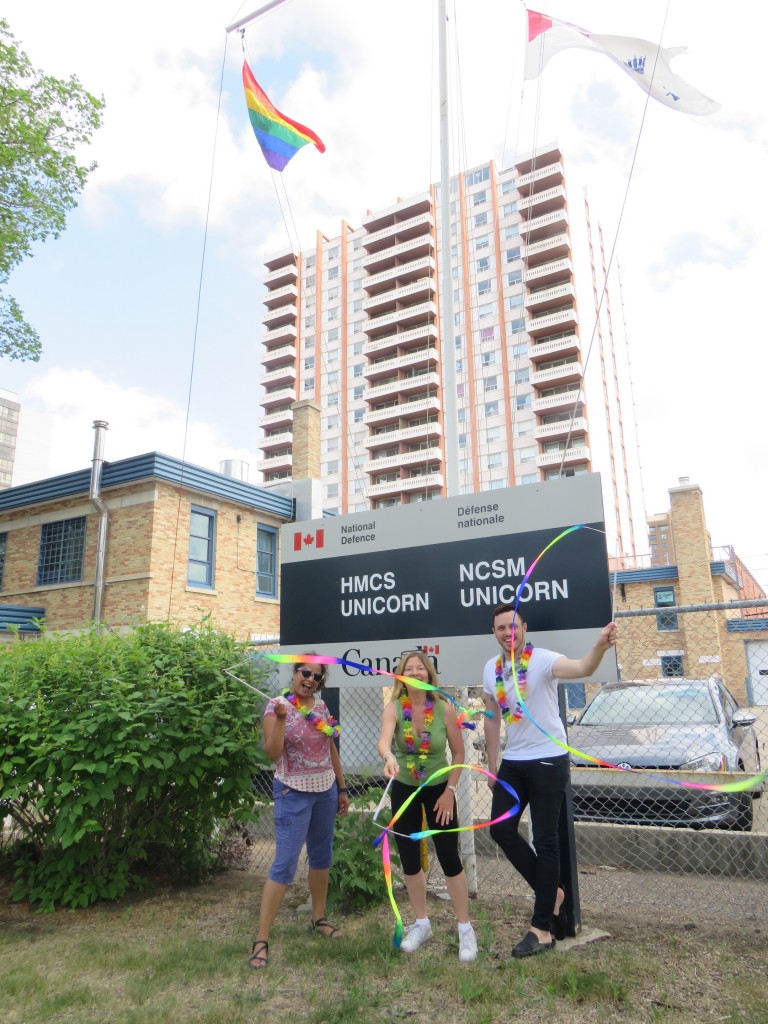 Established in 1923, the company’s title came from the name of one of the first vessels to enter Hudson’s Bay looking for the Northwest Passage in 1619. The naval office was right beside Tourism Saskatoon’s office, so I had to take a picture. As it was Pride weekend in the city, I marched in my first parade and had a blast. Who knew Saskatoon would be so interesting, creative and just plain fun? Oh, yeah. The New York Times, I guess. 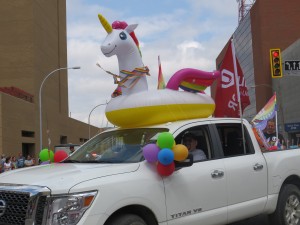 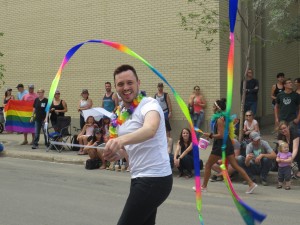 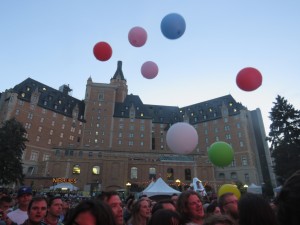 This entry was posted in Destinations and tagged Saskatoon. Bookmark the permalink.