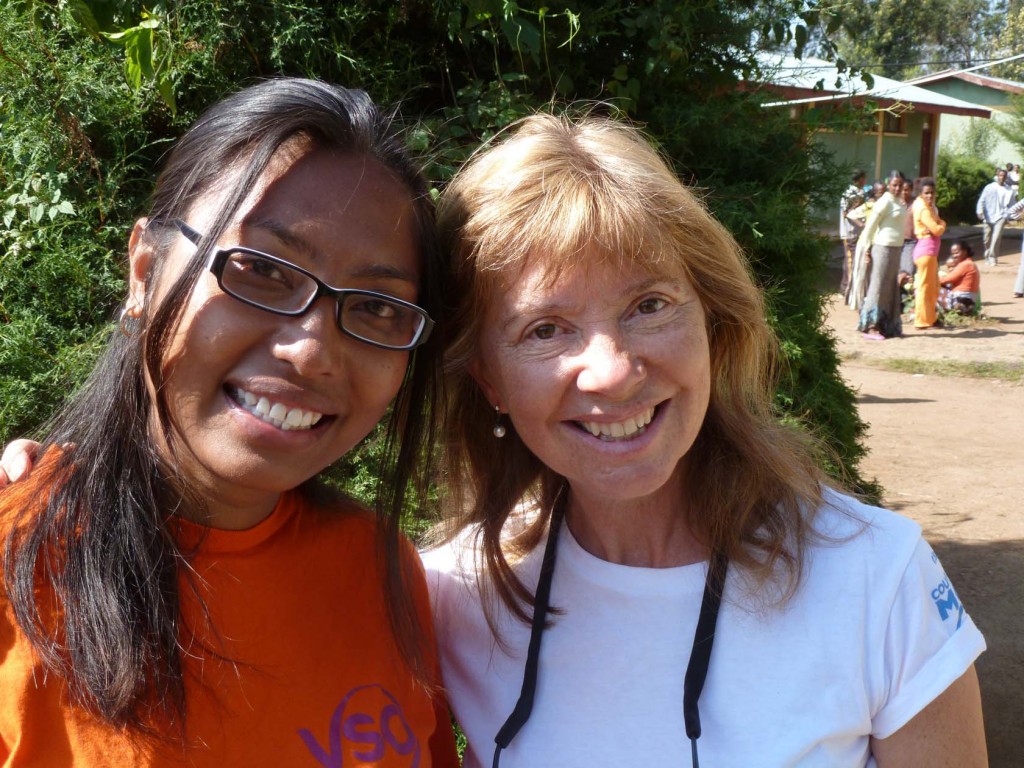 Rashidah and I outside her classroom.

We pulled into Enjibara before 9 a.m. the next day to see Rashidah Airin, a 32-year-old Indonesian woman volunteering in education. Although we were a bit early, she rounded up some of the students in her class to show us what they had been working on. Rashidah was a Higher Learning Diploma Program (HDP) leader and she had two classes of 15 candidates, all teachers at Enjibara College of Teacher Education. A former primary school teacher, Rashidah did a master of education management degree in Australia and then worked with an Indonesian NGO providing literacy and numeric training. “I met a VSO volunteer in Indonesia from the Philippines. She was a medical doctor working in a hospital. She was helping people and living in very humble conditions. I was so inspired by her I went online to apply myself,” she recalled. Having arrived eight months ago, Rashidah had made immense progress with her students, all instructors themselves. That day they were working of methods of peer assessment. One candidate, an English instructor, had the group break into groups and do a language comprehension exercise with a sample of text. There was much laughter when they realized each group had come up with different understandings of the paragraph. “It was difficult working here at first,” Rashidah admitted. “Most of the candidates are male and older than me. They’d ask questions and tell me they wanted expert opinions, not mine. I had to take it slowly; I went for tea with them and let them learn about who I was and what my background was. Now they respect me and are enjoying the class.”

From Dessie, we drove about two hours north to Woldia, a little town with a fairly new college. We thought it was a brick works when we first drove through the gates there was so much construction going on. Shelagh Hubbard and David Kidd were waiting for us in a little corrugated metal building. Shelagh has been there a little over a year, running the English Language Improvement Center, (aka the ELIC program). The room was full of cheerful diagrams, colourful charts, desks and a couple of computers. Shelagh has started a debating club, a girl’s club and a drama and reading club and also advises teachers and other campus staff on any English questions.”Today we’re going to debate whether it is better to live in a village or a town,” she explained. I sat in with the young men who were preparing, and keen to discuss their point of view. “What do you think? Who is right?” they asked me. “It depends on who is more persuasive,” I told them.

Shelagh motioned to two students peeking curiously through the door. 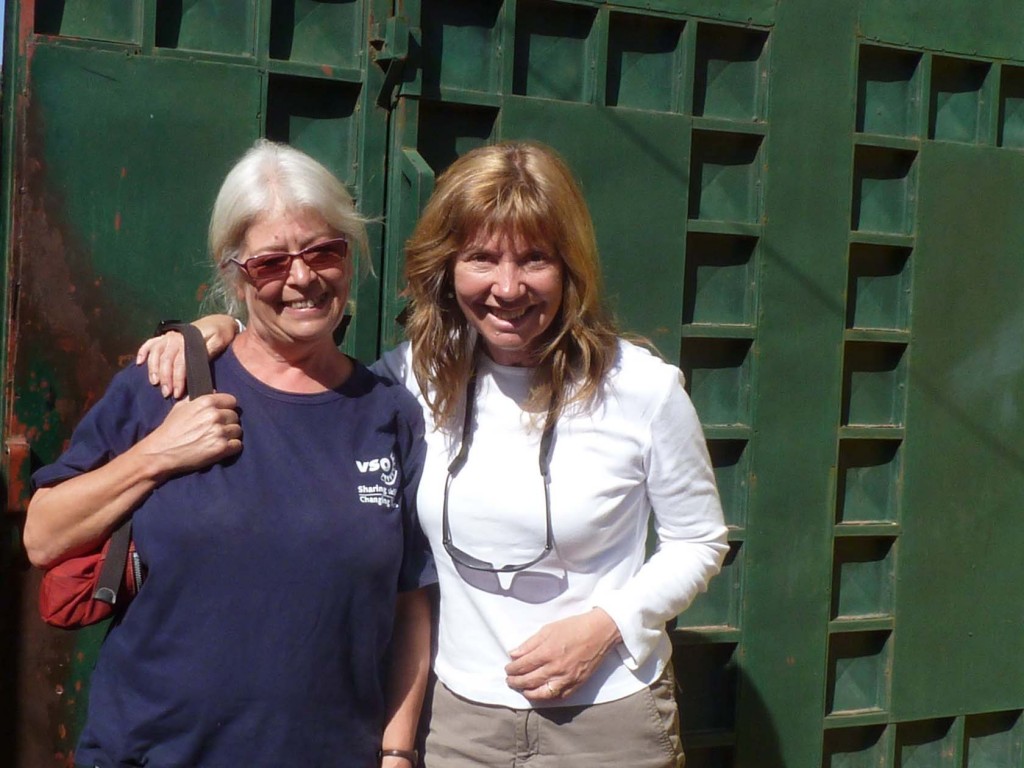 Shelagh and myself in Woldia. 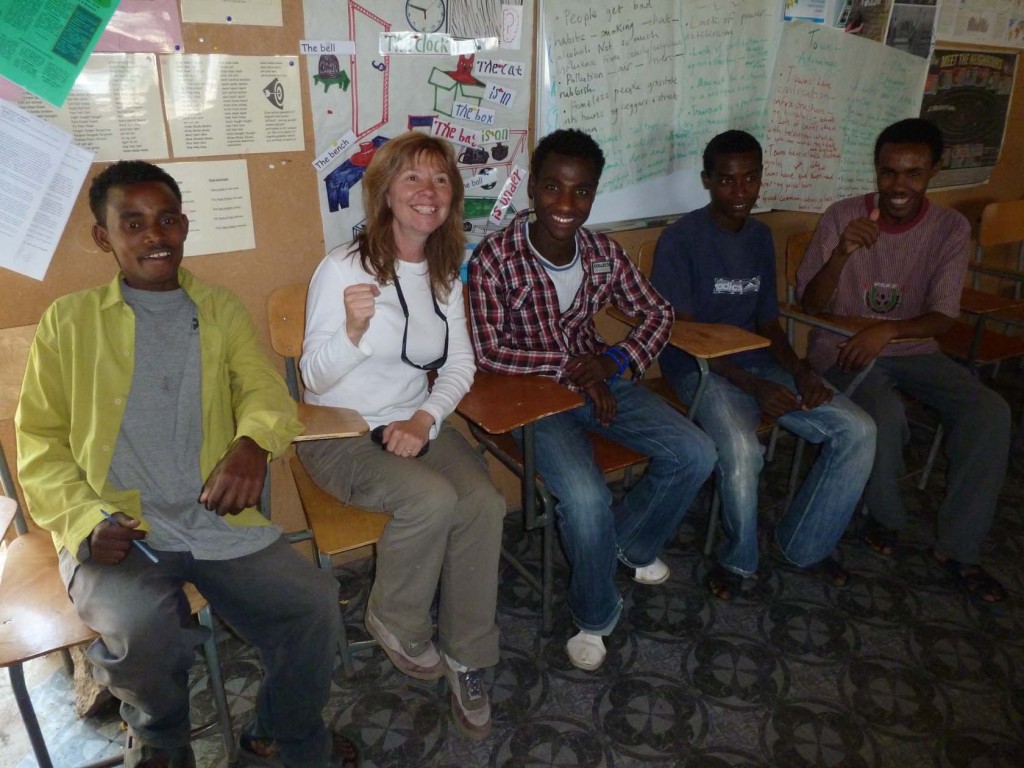 Listening in on preparations for the Great Debate.

“Come meet my girls,” she said with a big smile. Two young women shyly came into the room. “What do you talk about in the club?” I asked. Shelagh explained they pick different subjects each week and she directs the conversation. The upcoming discussion was going to be on what age to get married. I asked the girls their opinion and they both agreed 20 was a good age.

David was newly arrived and will be taking over from Shelagh when she leaves at the end of the year. “I really want to make sure all Shelagh’s work is sustained and that what she’s created can be continued into the future,” he said. David, from the north of England originally, explained he had volunteered with VSO in Eritrea for four years, but since VSO wasn’t sending volunteers there any more due to security, he had decided to go to Ethiopia, next door.