Posted on November 9, 2017 | Comments Off on Rediscovering Buffalo 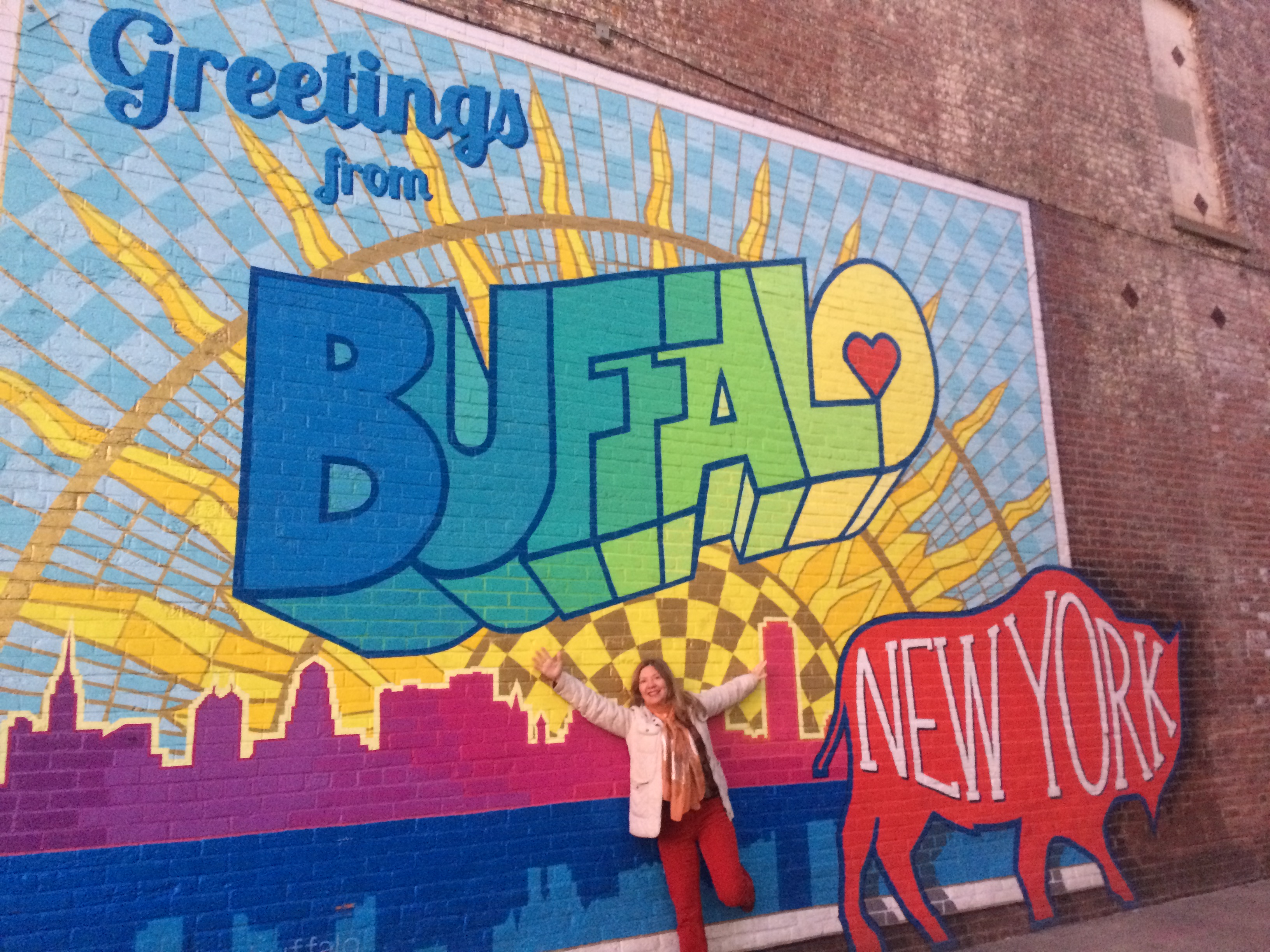 Buffalo is a short, 1.5-hour drive from Toronto (when the border gods are in your favour), so the hubby and I decided to go to the city his father often shuffled off to in glory years bygone. The City of Light, where electricity was first introduced in the United States, is undergoing a major resurgence. The state has sunk one billion dollars into its revitalization and I’m told there is another billion coming its way. The city definitely had perked up since I first visited back in the 1980s. Here’s a little snapshot of our trip….
Hotel Henry, a National Historic Landmark, opened in May and was formerly Buffalo State Asylum for the Insane. “There are no ghosts here,” I was informed at check in. Hmm. Built in the late 1800s, it was designed by top American architect Henry Hobson Richardson and the landscaping was by Frederick Law Olmsted and Calvert Vaux. In a prime location next to Buffalo State College and the Albright Knox Art Gallery, it had sat more or less empty since the last patients moved out in 1974. 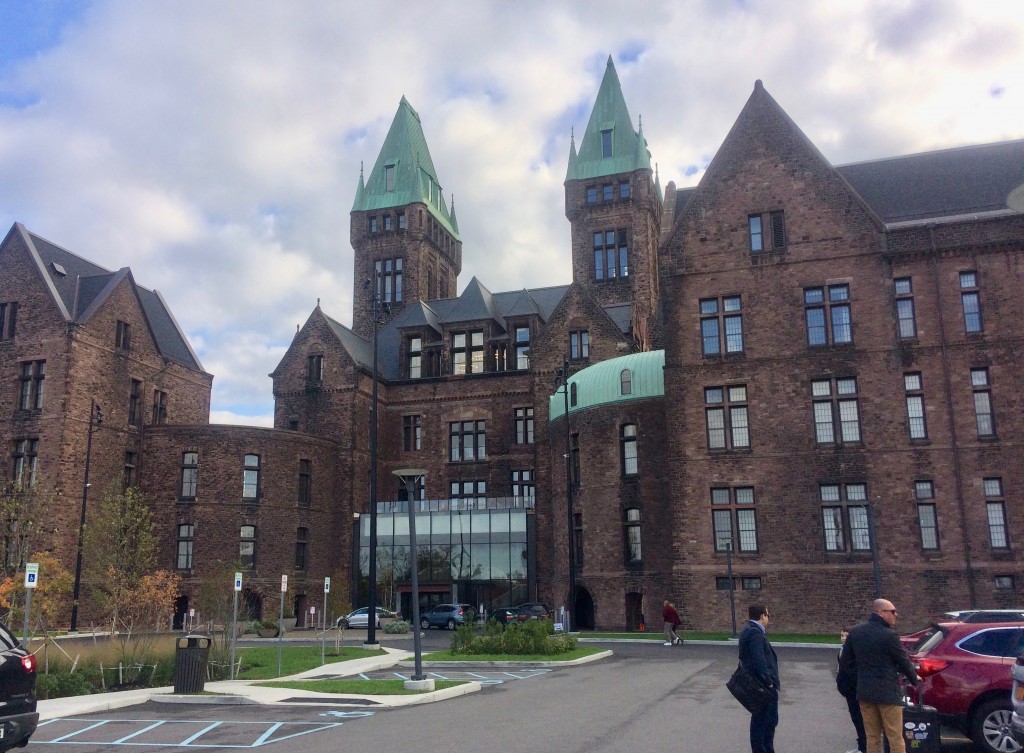 Buffalo in the 1970s was a rather blighted city, but thankfully this amazing structure didn’t meet the wrecking ball due to what is known as “preservation through poverty.” There were only 88 guest rooms, but the place was massive. Walking down the hallway to our room, I felt like I was traversing a couple of football fields. Our room looked like it had been created from three patient cells. The ceiling was at least 16 feet high and our windows faced some of Olmstead Vaux’s lush green expanse. 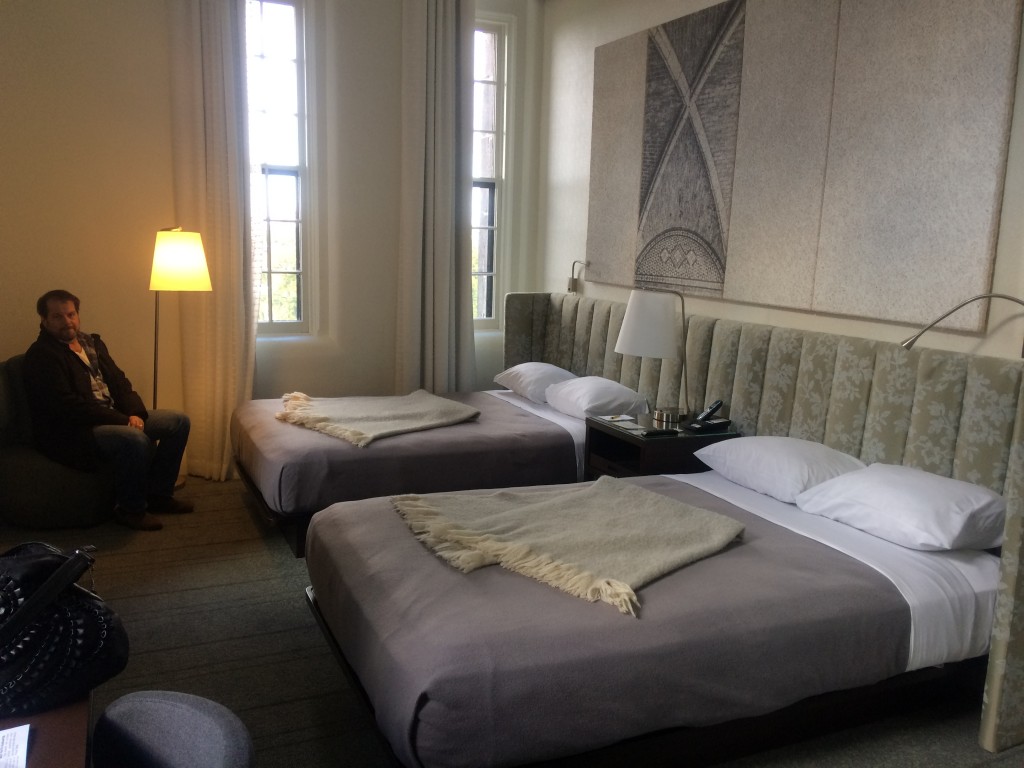 As well as a hotel, the complex is used for corporate events, fundraisers and community gatherings. The Lipsey Buffalo Architecture Center is set to open on site early next year.
We were lucky to receive a tour from Christine Krolewicz, manager of planning and operations of the Richardson Olmsted Campus, who took us into some of the unrestored areas. Peeling paint, crumbling plaster and forgotten shelves greeted us as we poked around former patient rooms and administrative offices. 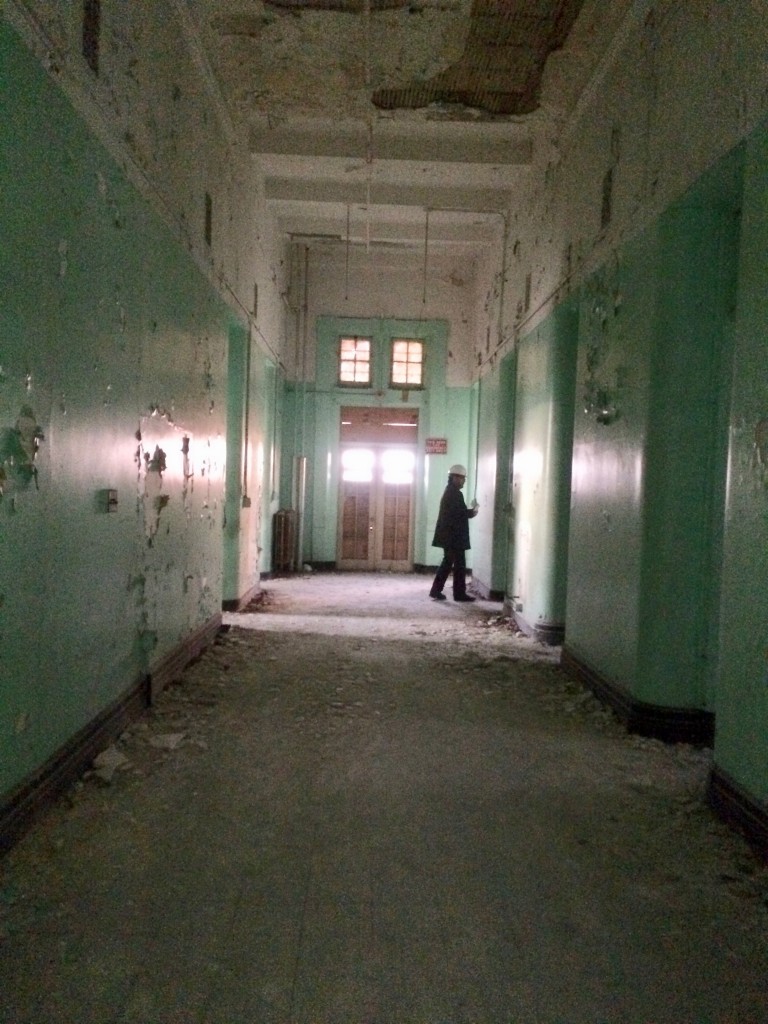 Although an insane asylum has very scary connotations, Christine told us the institution was ahead of its time when it opened. “It provided a system of enlightened treatment for people with mental illness as developed by Dr. Thomas Story Kirkbride. The environment was pleasant, people could socialize in the halls and there was an farm on site where some of the patients could work, getting exercise and fresh air. The farm produced much of the asylum’s food.” This reminded me of the hospital for the mentally ill that is now Humber College in Toronto. On tour there I was told on closing many of the patients did not want to leave.
Once 200 acres, the asylum grounds have shrunk to 42 acres and the hotel sits on six. We wandered the property and got a glimpse of the campus’s many rambling structures, where the old greenhouse stood and some of the old farm buildings. Inside the hotel, in the “connector” halls between the towers and the wings we were delighted to see a pop up art gallery installation of Western New York artists. 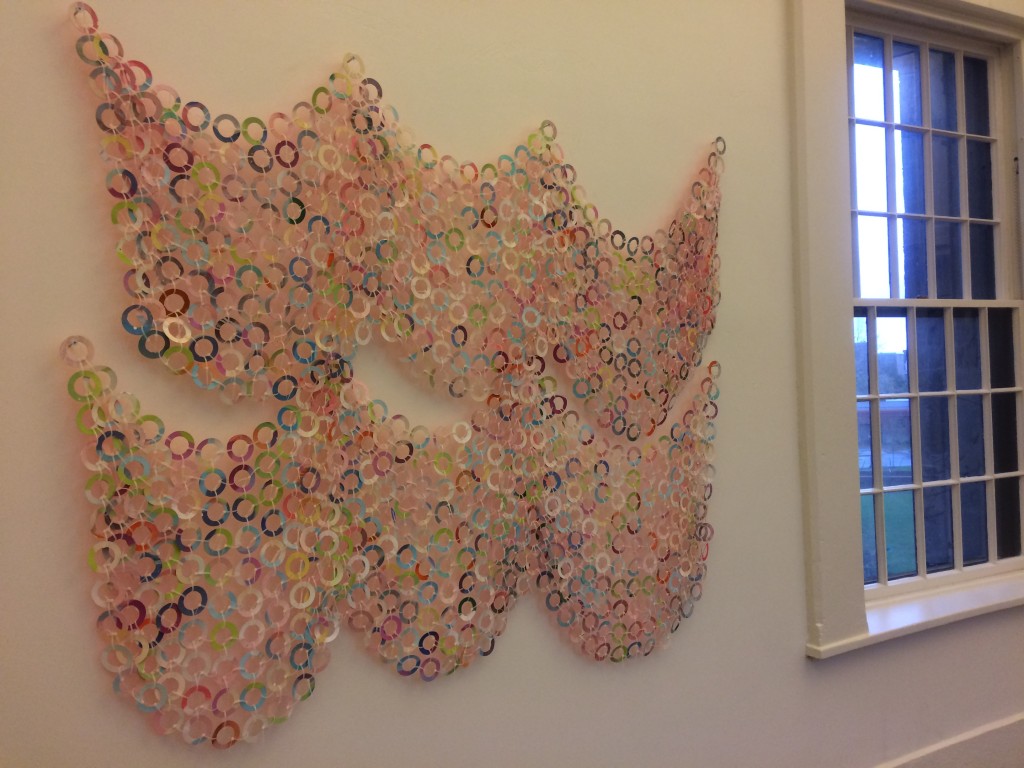 At Seabar, a popular sushi spot, we indulged in luscious raw tuna and salmon, as well as a few specialities including a “beef on weck sushi roll.” “We tried it out as a gimmicky promotion and people loved it, so it has stayed on the menu,” owner/chef Mike Andrzejewski explained. 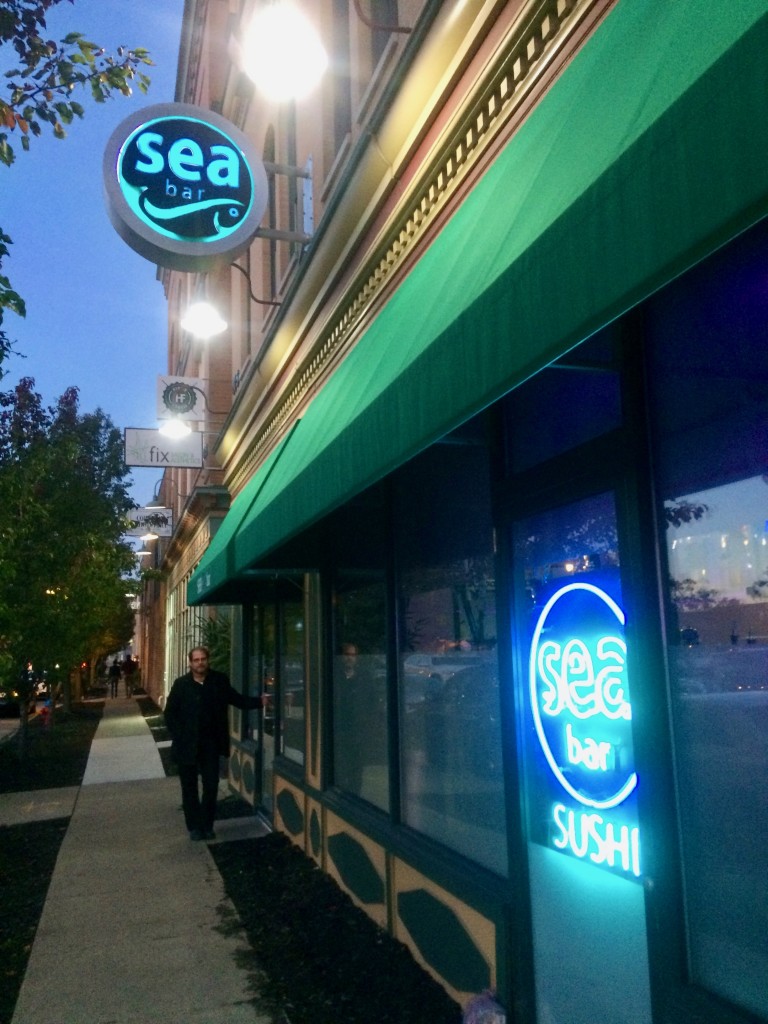 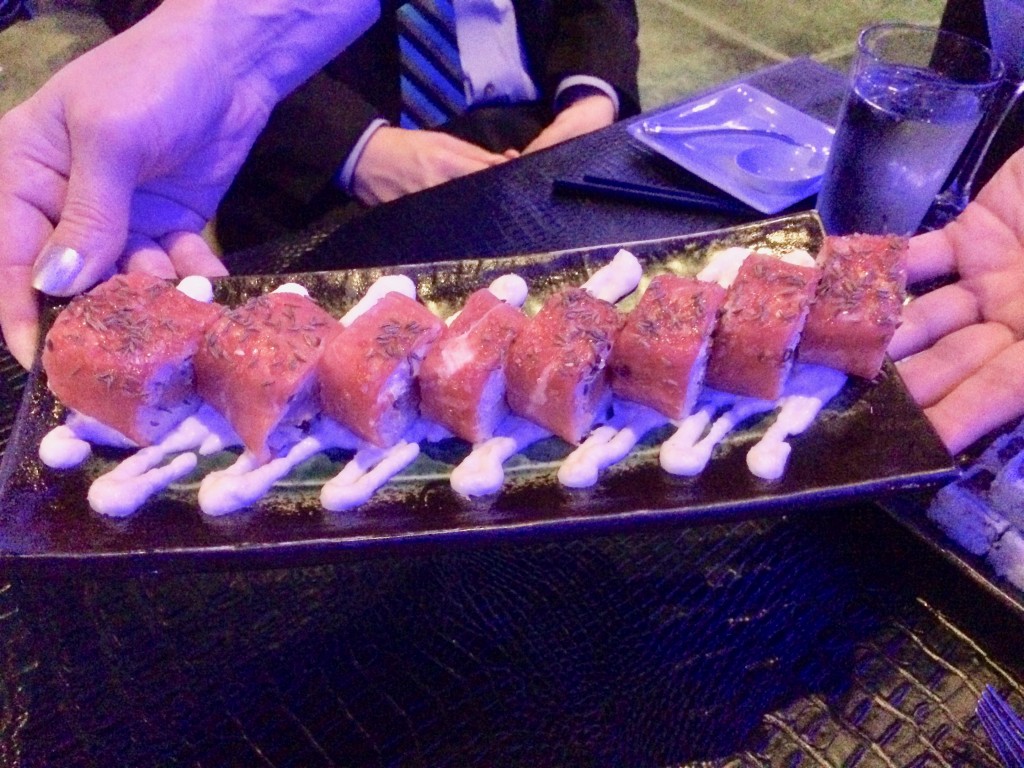 Breakfast was at Hotel Henry’s 100 Acres, named in honour of the asylum’s original, 100-acre farm. Egg and bacon on a bun, frittata, fresh cinnamon muffins, oatmeal and fruit were our choices, paired with delicious, steaming hot lattes. 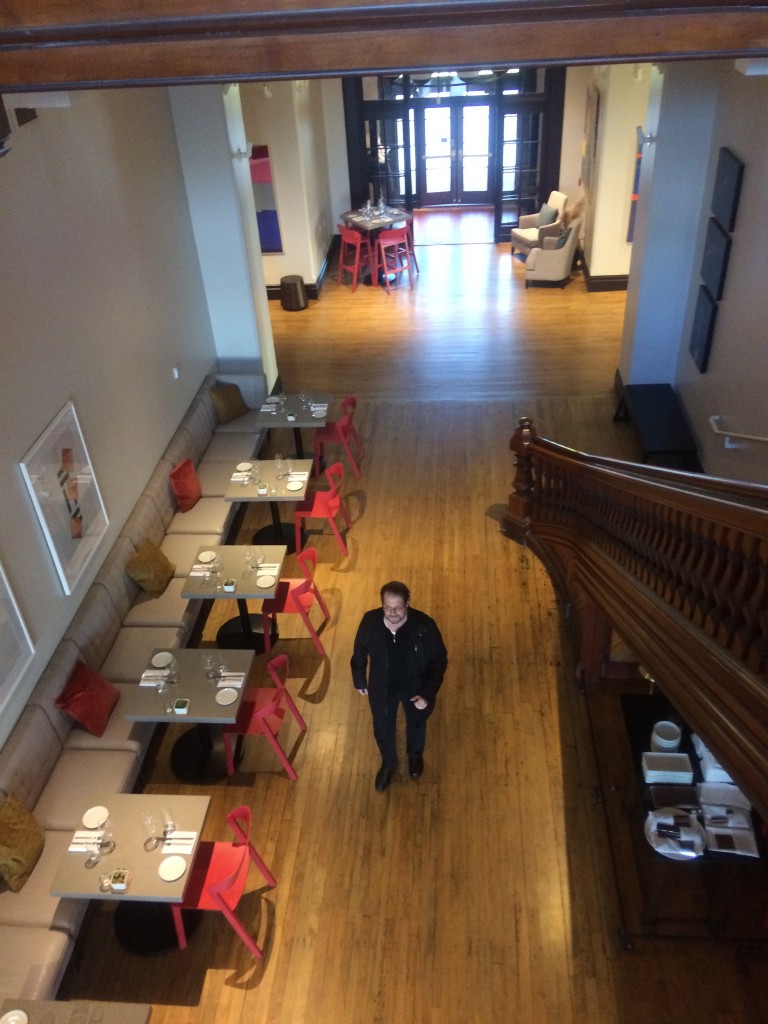 Just around the corner, walking distance from the hotel, was the Burchfield Penney Art Center. Charles E. Burchfield was an artist from Western New York who began making a name for himself around 1915. Specializing in painting inspired by nature, Burchfield painted landscapes, abstracts and children’s book illustrations. I found his work beautiful and evocative. One piece I especially admired was inspired by the sound of a cricket. 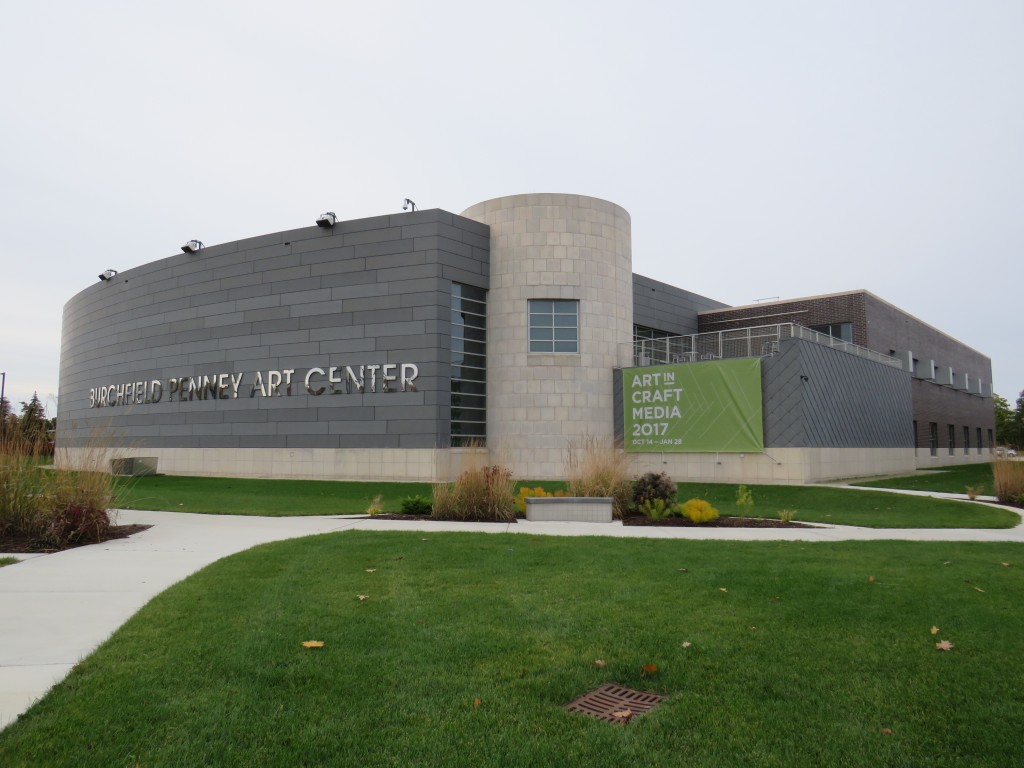 We walked across the street and headed into the Albright-Knox Art Gallery. I have visited this gallery many times and am always delighted by the exhibits, whether permanent or temporary. An exhibit called Out of Sight, Art of the Senses was on and we wandered past carousels and fantastical creatures, sat down at a tiny tea tent, and played amongst the giant card table and folding chairs. We also spent time at a huge anime-style series of paintings by Takashi Murakami. 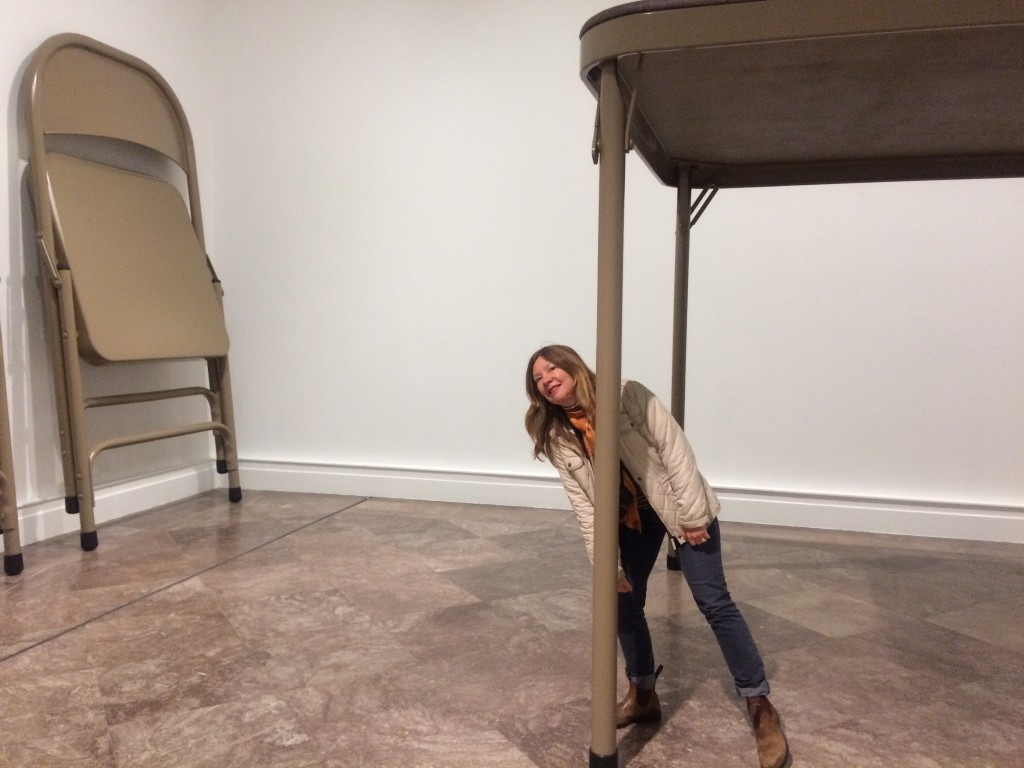 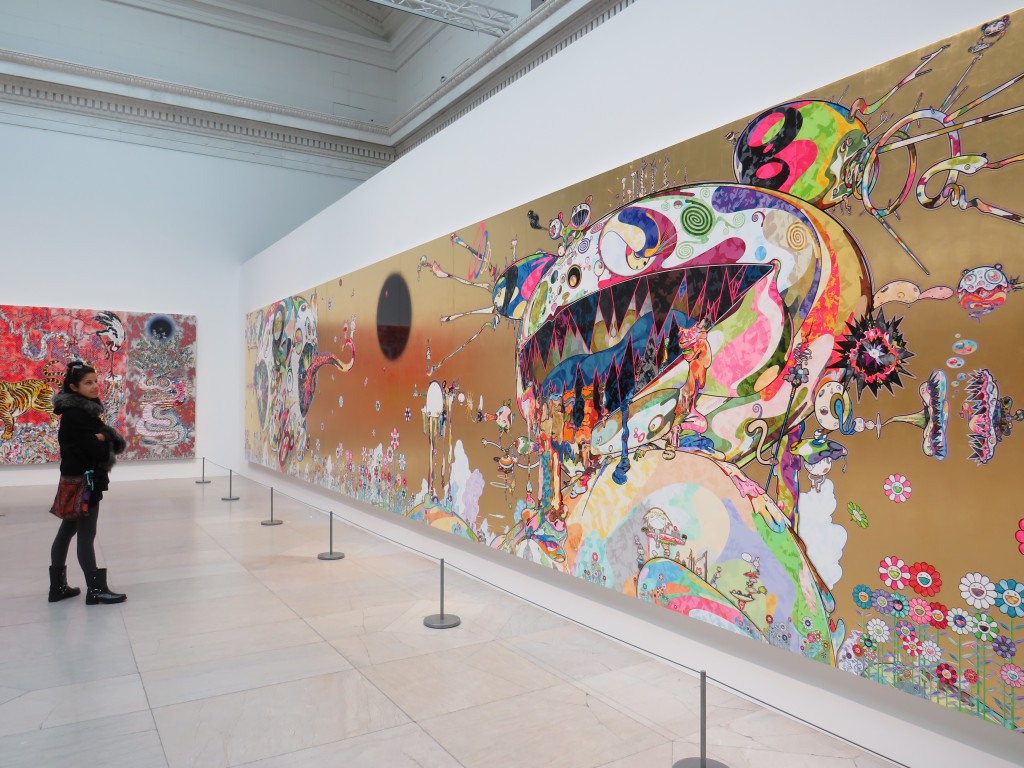 Lunch was at Lloyd Taco Factory on Hertel Avenue. Specializing in tacos, burritos and sides, the restaurant started out as a food truck and now has morphed into a sit-down location complete with bar stocked with a huge variety of tequila and mescal. 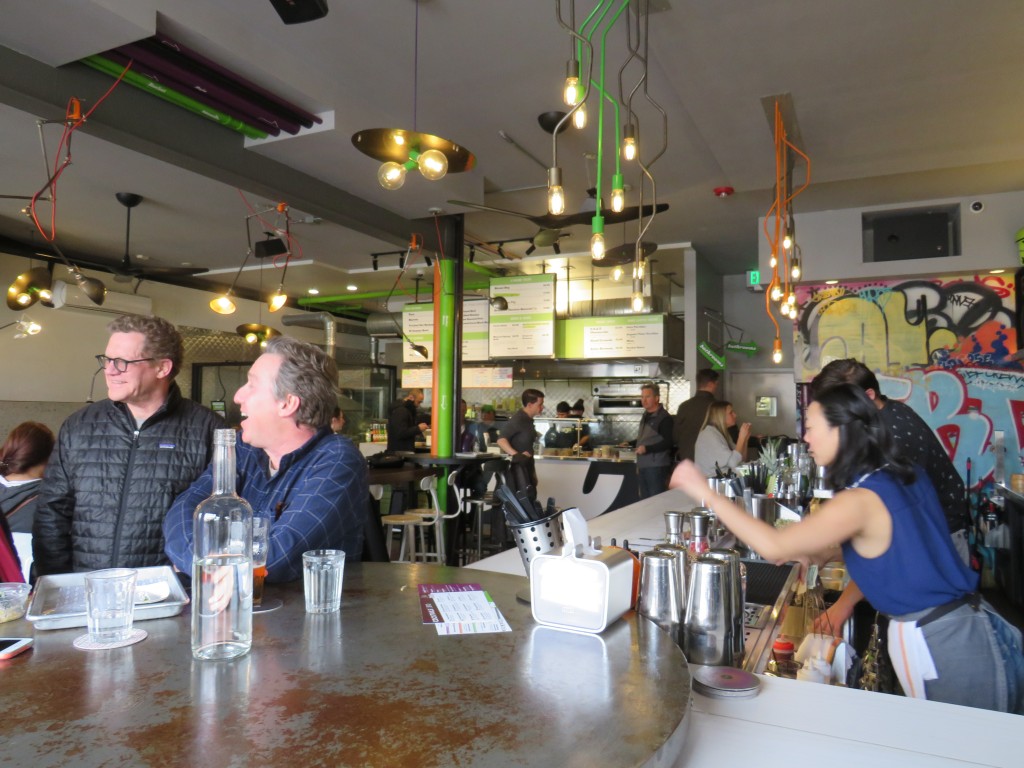 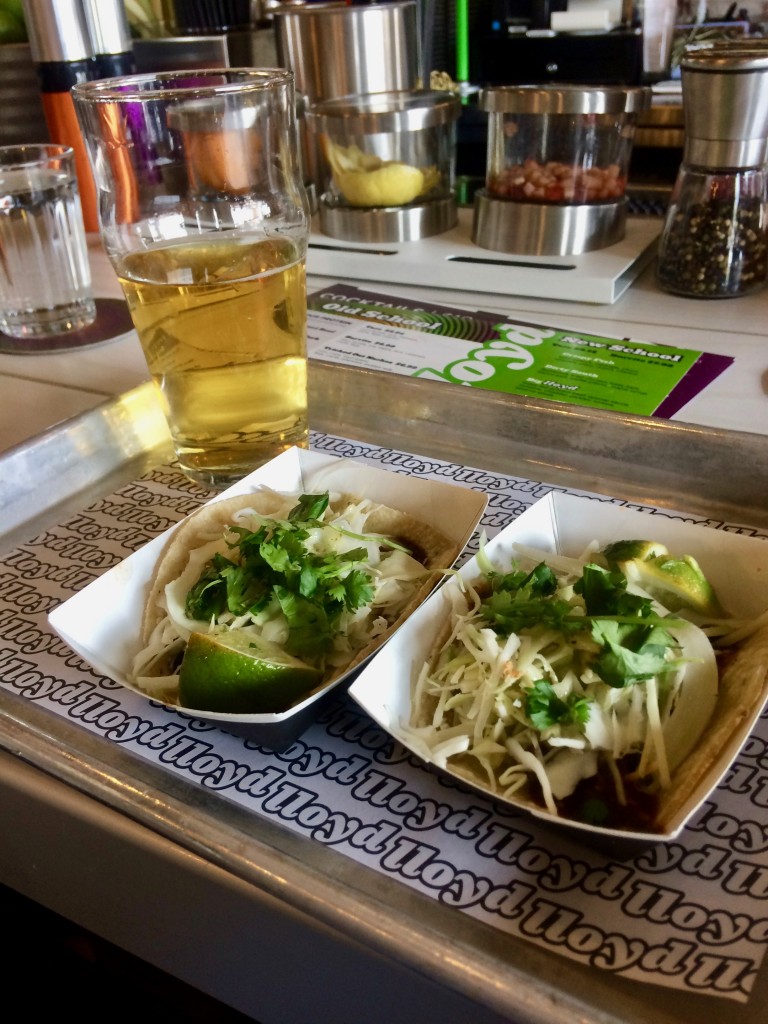 At 2 pm we were booked into a tour at the Martin House, designed by Frank Lloyd Wright (I don’t think related to the taco factory). After viewing a short film on the design of the house in the welcome centre, a docent took us across the path and into Wright’s signature “Prairie House.” Darwin D. Martin was a businessman with the Larkin Soap Co. who had risen from being a soap slinger to heading the company. A devoted family man, Martin spent a lot of his time in the house with his wife and children. We viewed the magnificent hearth clad in wisteria tiles at the entrance, as well as the living room, dining area, and kitchen. A pergola joined the house and the stables, that were chock-a-block with Wright’s trademark horizontal lines. 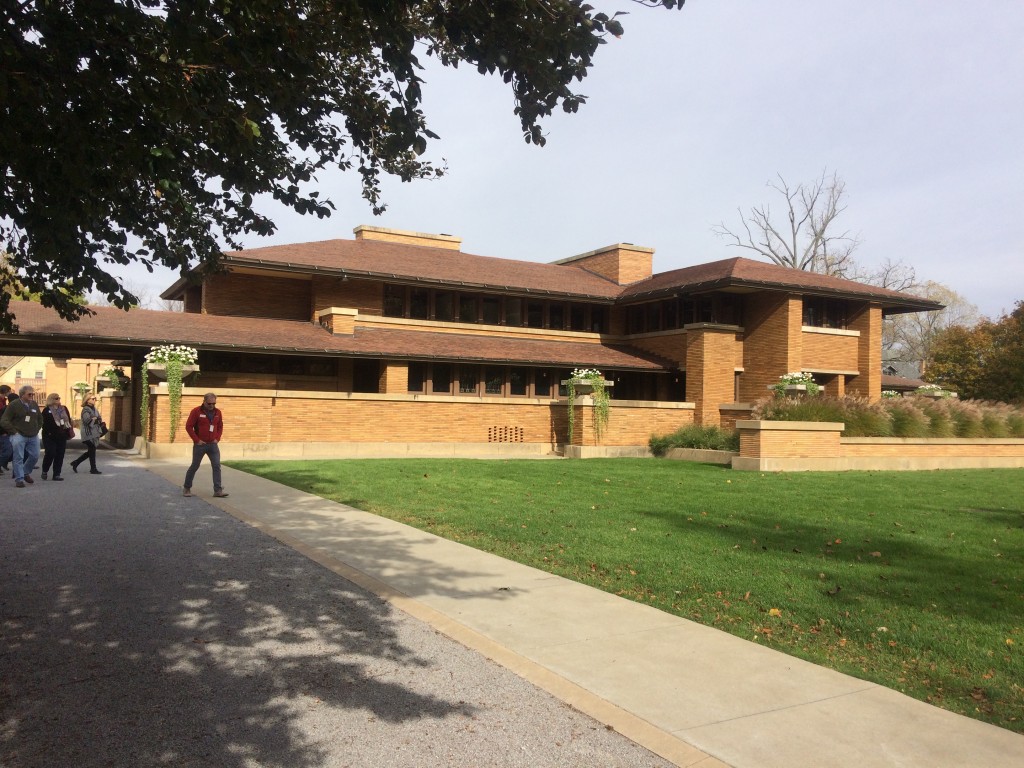 Dinner at The Black Sheep focused on house cured meats and homemade food. A charcuterie board started the meal, then we tucked into plates of prime Creekstone Bavette flank steak with Idaho finger potatoes, and roasted brussel sprouts (my favorite) with Cape Cod Bay scallops. The refreshing rhubarb sorbet went down nicely at the end. 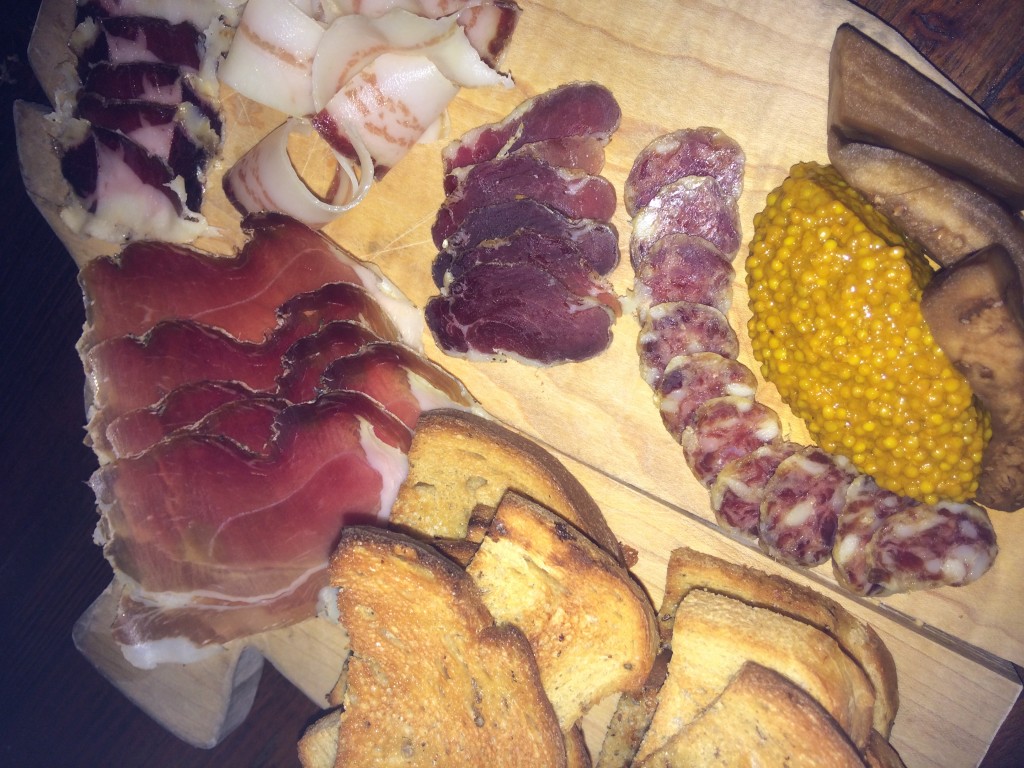 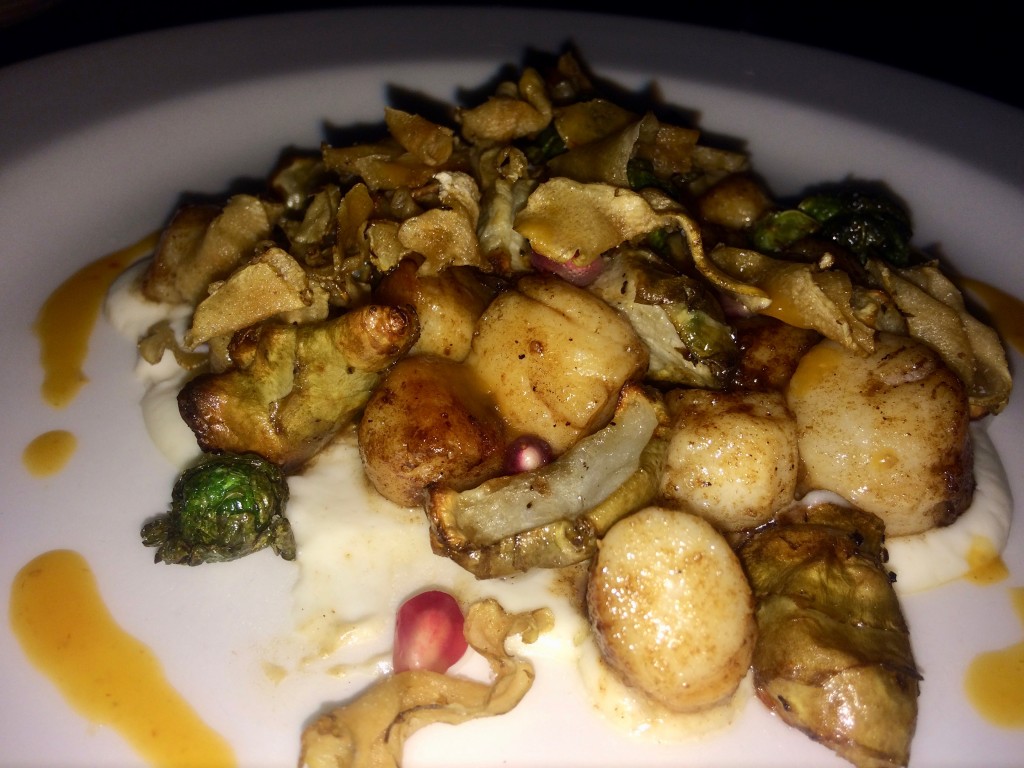 In Larkin Square, near to Darwin Martin’s Larkin Soap headquarters, we discovered the Swan Street Diner, a circa 1937 era Sterling Co. diner moved from New Jersey that opened in October. “The counters, stools and floors are new, but the interior structure panels and wood trim are original,” explained Amanda Amico, the manager. I felt like I was lost in an Edward Hopper painting as I munched on toast and a muenster cheese omelette stuffed with fresh chives and tarragon. 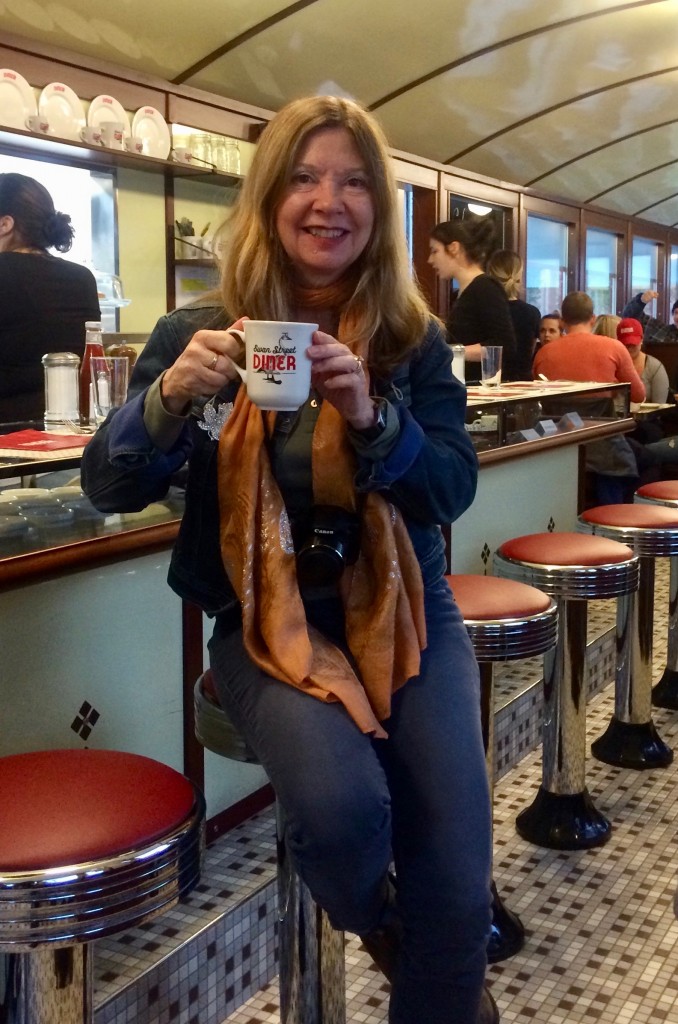 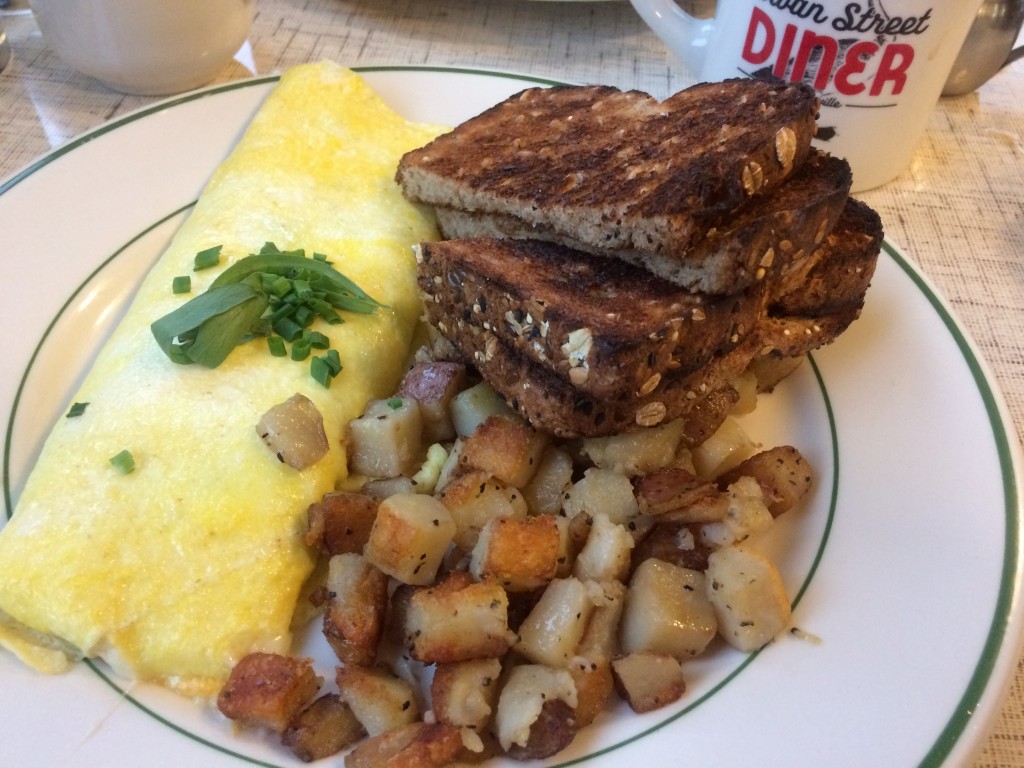 It was raining heavily when we headed out to Frank Lloyd Wright’s Graycliff, a summer house he designed for the Martins. Around 20 miles from downtown, Graycliff is set high on a cliff overlooking Lake Erie. Built between 1926 and 1931, the house was in Darwin Martin’s wife Isabelle’s name and was built to her specifications. She requested lots of light, and Wright complied, installing windows in every room and areas where you can see from the front of the house through to the lake on the other side. Located on 8.5 acres, the house has a wonderful rolling lawn with a lovely water feature. Still being restored, the house has a second floor where Isabelle and Darwin’s bedrooms were (separate because he snored). At the lake is an astounding stairway built of Bethlehem Steel that has withstood almost 80 years of Lake Erie winters. Unfortunately, the bridge to the stairs has had to be removed due to erosion and instability. 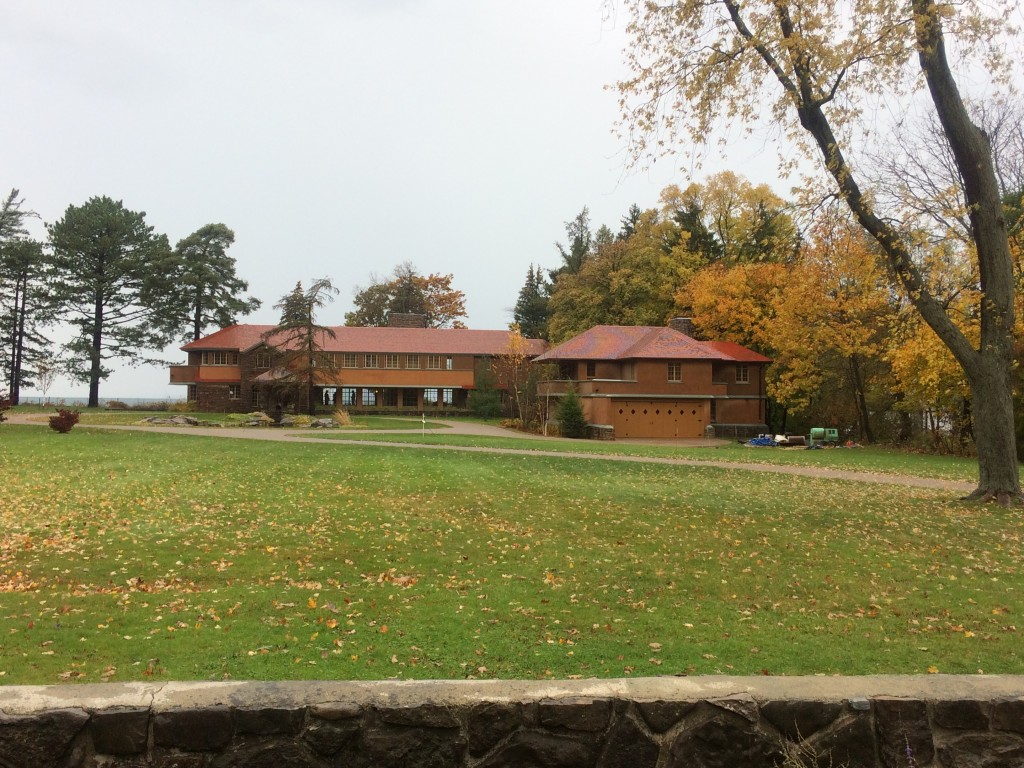 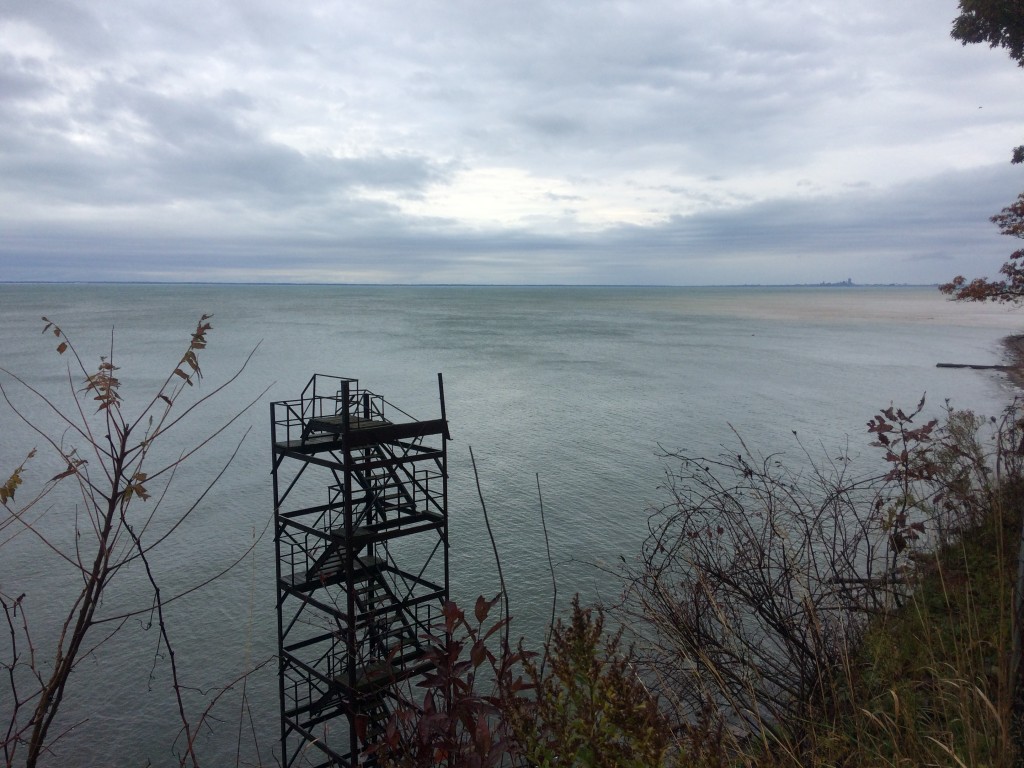 What trip to Buffalo is complete without Buffalo chicken wings? We love the tried-and-true original, Anchor Bar, but wanted to try something new so we headed to Gabriel’s Gate, in the charming section of town known as Allentown. Seated at a wooden banquette in the Tift Row House, circa 1864, we gorged on tangy chicken wings, washed down with a local beer. The verdict? Delicious. 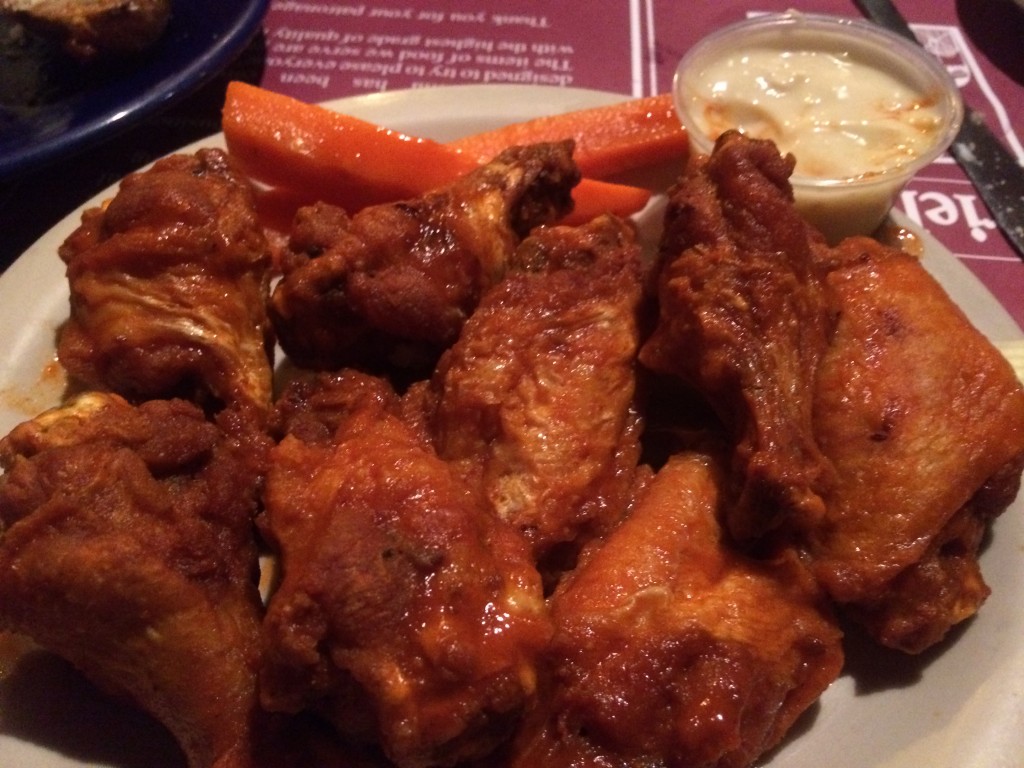 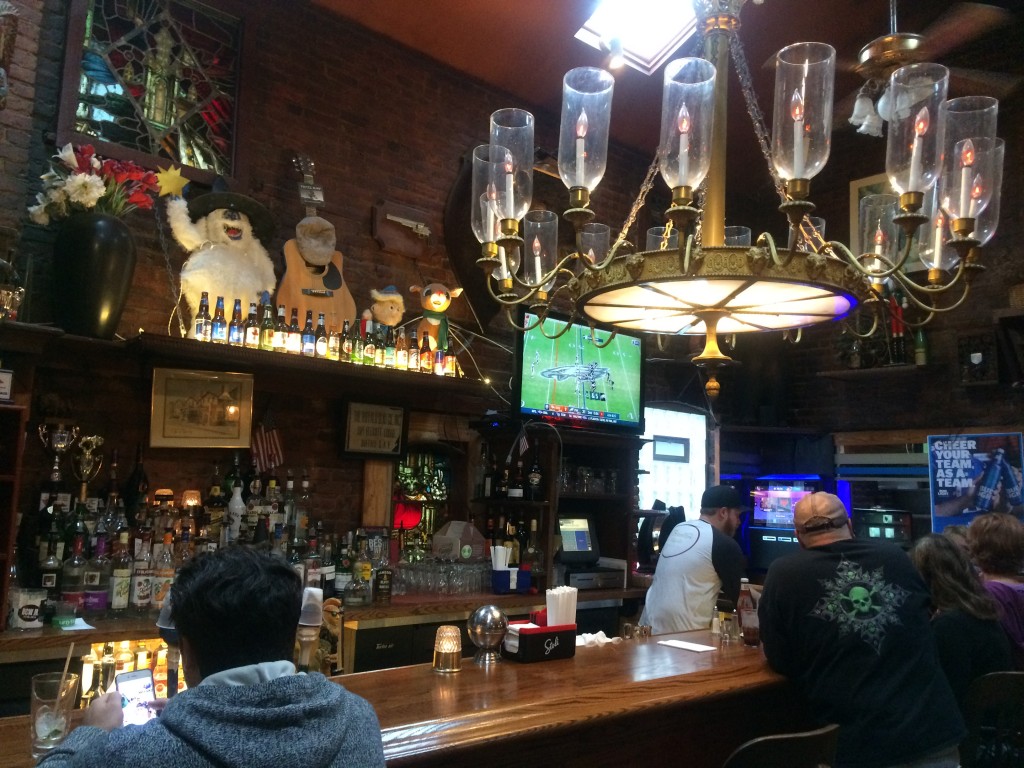 The Theodore Roosevelt Inaugural National Historic Site was our last stop. After President McKinley was assassinated at the Pan-American Exposition in 1904, his vice president Theodore Roosevelt had to step into the president’s shoes. This took place at the home of a friend, Ansley Wilcox on Delaware Ave. The first floor of the home is is replicated to look as it did when Roosevelt visited and we stood in the library, where he was sworn in. Hard to imagine there were 60 people jammed in that smallish space. “There are no photographs of the ceremony because the official photographer started a fight with another photographer who had snuck in. They both were told to leave the room,” our docent explained. We viewed an excellent exhibit that explored all the challenges in the nation Roosevelt faced (racism, poverty, trade) as he took office. Upstairs was a room set up like the oval office, perfect for selfies! 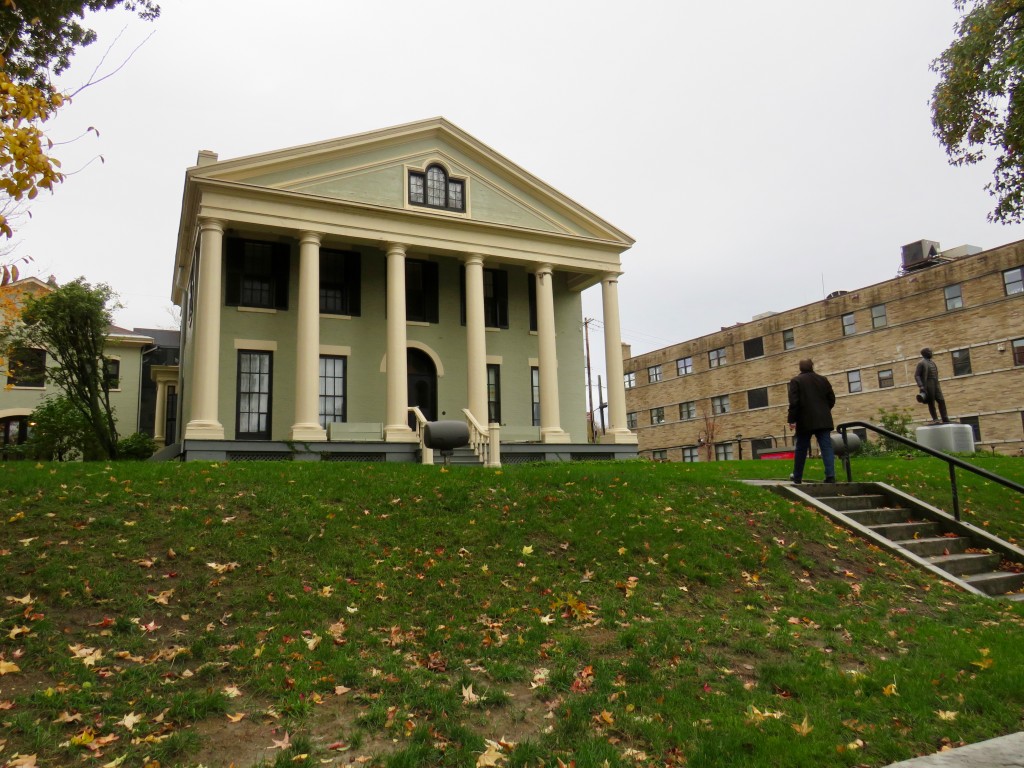 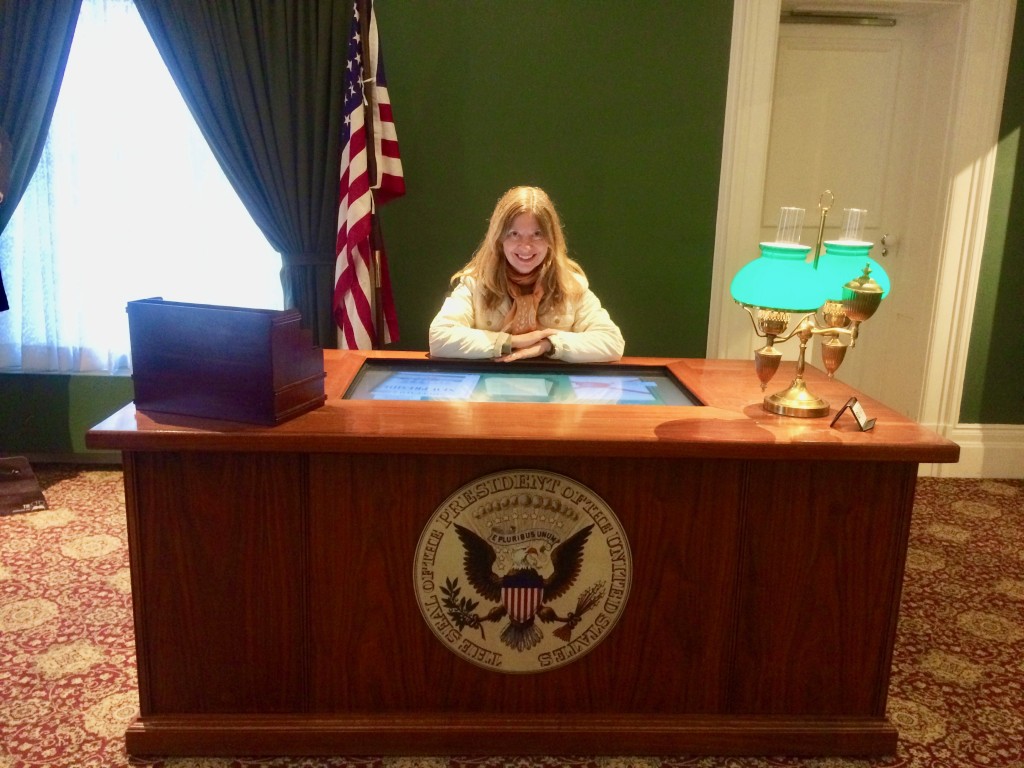 There is a lot going on in Buffalo. Far more than I could cram in on this short visit. But I will return. Not with a shuffle, but with bells on!

Comments Off on Rediscovering Buffalo