Posted on January 24, 2015 | Comments Off on Cool Things About Vietnam 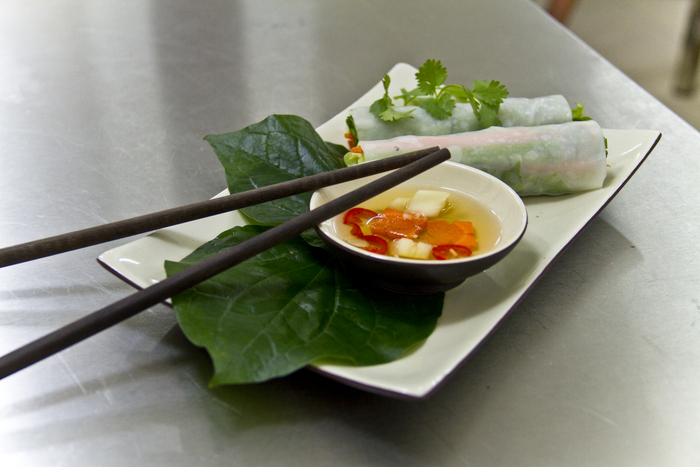 1. Fish sauce. A salty clear-ish liquid made from fishies like anchovies. Add chilies and lime juice and splash on just about anything.
2. Ice tea and ice coffee. Usually served in a tumbler with one or more big chunks of ice. Tra da (pronounced cha da) is “tea” “ice.” Caphe sua da is “coffee” “milk” “ice.” The milk is sweetened condensed. In the north they also mix in yogurt. Caphe sua chua da. Yum. Like a milkshake. 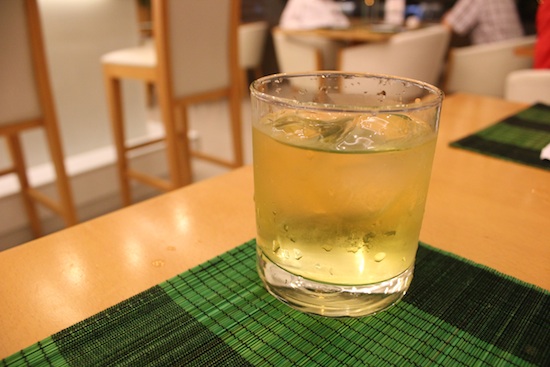 Tea from the north I find bitter, but I love the artichoke tea from Sapa and the ginger tea is wicked. At cafes you often get a free glass of ice tea along with whatever else you might order.
3. The conical hat. I went to a village where these were made. By hand. Takes a good solid two days and many, many stages including softening the palm leaves by foot, drying them, ironing them, hand stitching them to a frame. They sell for $5. Incredible. 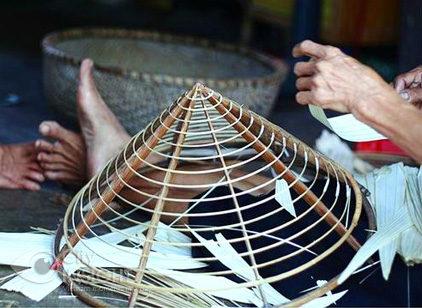 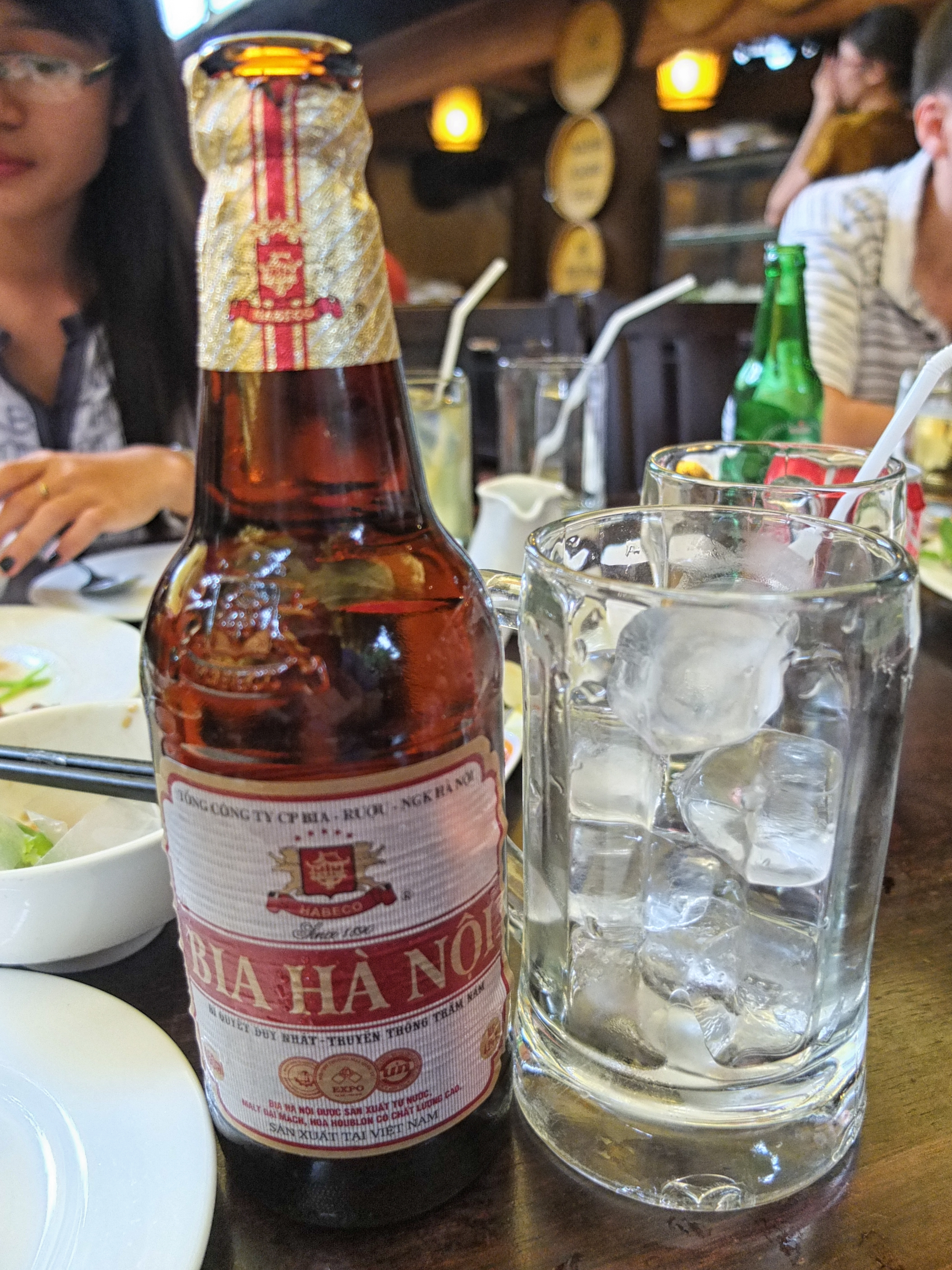 5. Tiny plastic stools. These are whipped out for eating or drinking on the street. A little tough on guys with long legs. 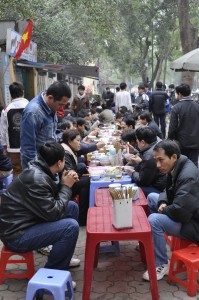 6. Silk scarves. Everywhere in every colour. Gorgeous and cheap. 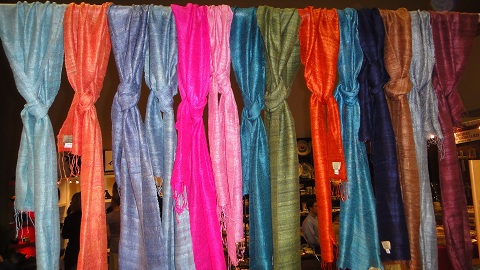 7. The word “oi.” “Oi gioi oi” means “Oh my God.” “Em oi” is what you yell at waiters to get their attention…means, “Oh hey there young person.”
8. Bun Cha, a delicious noodle soup with bbq pork patties and fresh herbs. Great in winter. 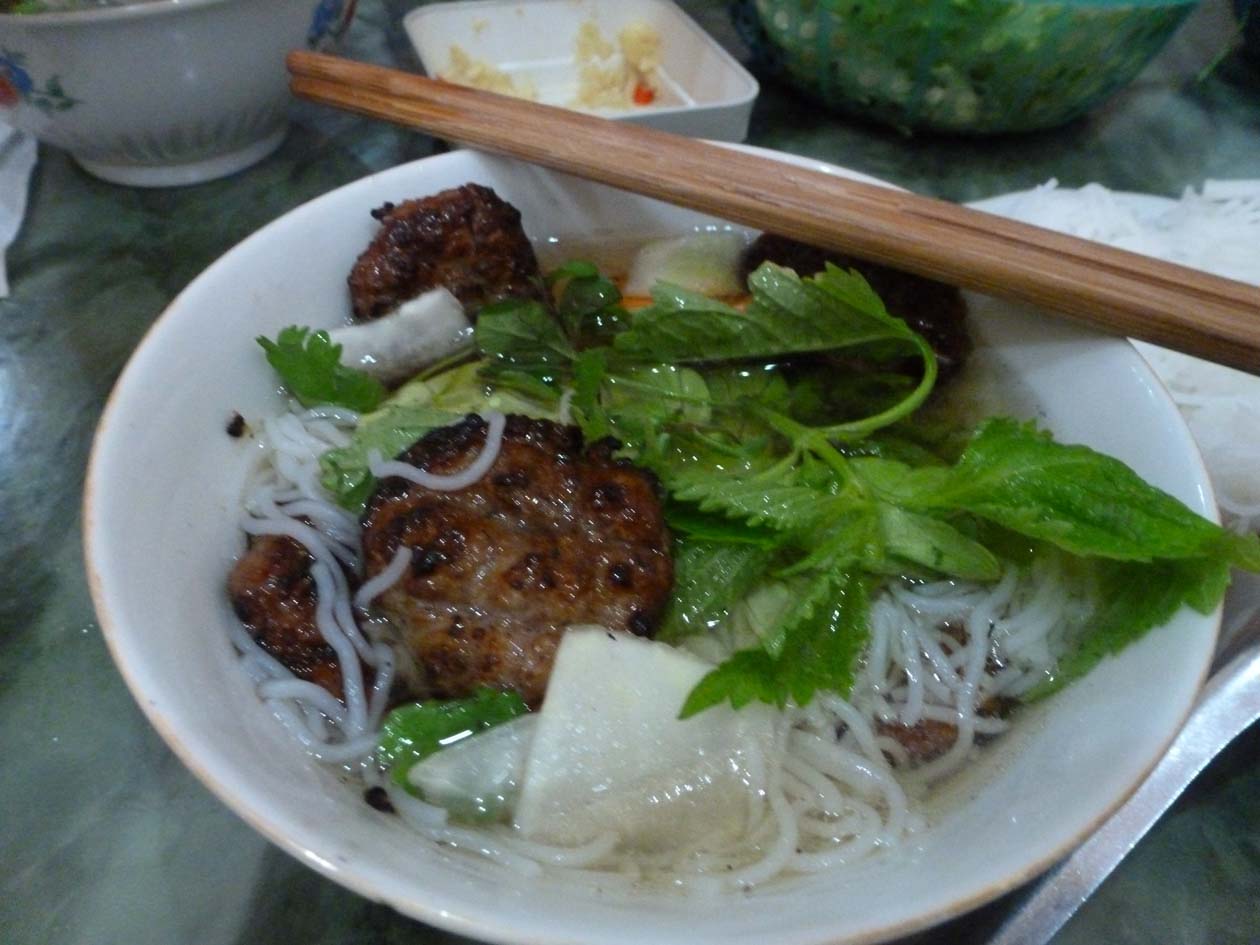 9. Pearls. Not always the best quality but fun and cheap. Bought some from a woman in a boat in Halong Bay. 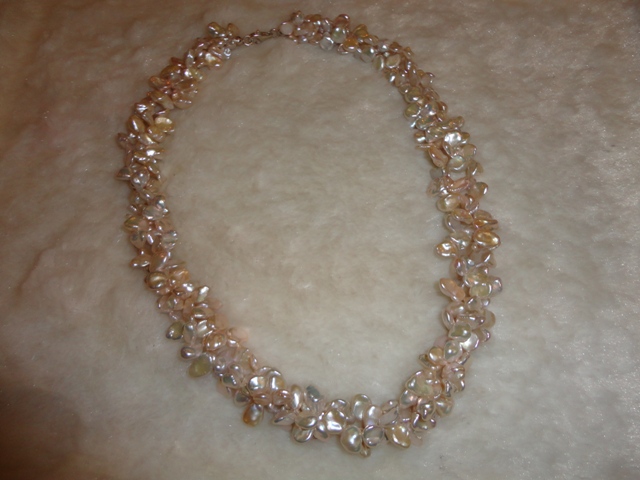 A necklace in Hanoi I’m coveting.

10. Love of poetry. Reading and writing it is a national pastime. Wonderful.

Comments Off on Cool Things About Vietnam 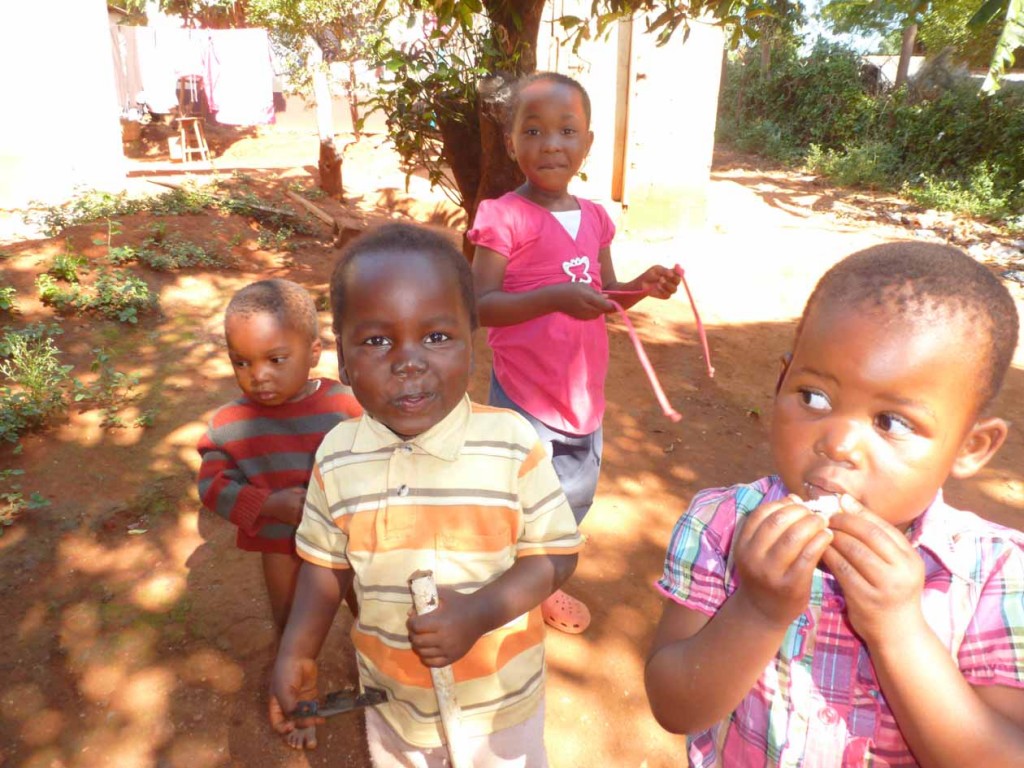 Children in Lobamba love having their picture taken.

People who are only visiting Swaziland for a short time can get a feeling for the true life of Swazis by taking a village tour. Yes, the first impression of Swaziland is smooth paved highways, shopping malls filled with trendy, Chinese-made merchandise, grocery stores overflowing with packaged goods…and yet, this is not the experience of 80 percent of the population. The majority of Swazis live in rural areas. Their homesteads comprise mud and stick huts, they have to walk long distances to get water, they cook porridge in three-legged pots over an open fire and many children do not attend school because the fees and costs of uniforms is more than parents earning $2 a day can manage. Unemployment is rife and a single wage earner often supports extended families of up to 15 people.

When I had a visitor recently, we went on a guided walk through Lobamba Village with a local tour operator called All Out Africa. The Lobamba region is between Manzini and Mbabane. It’s the cultural capital of the country and is the home of eLudzidzine, the King’s traditional royal residence. The royal stadium is host to the annual Reed Dance and the Royal Kraal draws thousands each year to the Incwala ceremony. The parliament buildings are here, as well as the National Football Association headquarters. 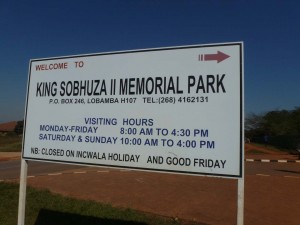 We started our tour at the museum, which explained how Swazis are really Zulus who broke off relations with their warring leaders in the 1700s. Following the Dlamini clan, they settled in the safe, mountainous region now known as Swaziland. The museum chronicled the Transvaal rule, the era of the British protectorate and independence in 1968. Much emphasis was placed on the current king’s father, King Sobuza, who brought in archeologists and anthropologists to help define what is now knows as Swazi culture and tradition. This includes the traditional garb, the national ceremonies and an uncodified and unwritten “cultural” law. 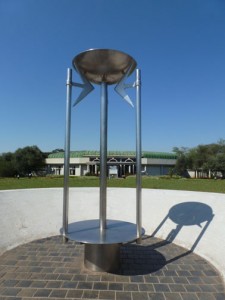 The Eternal Flame, lit only on special occasions.

Next to the museum was King Sobhuza II’s memorial, consisting of a statue and a sort of mausoleum only accessible to Swazis. It is also home of the so-called eternal flame, which is lit only for special occasions. The best part of this memorial facility is the display of King Sobhuza’s cars. A humble man who liked to walk barefoot and sit on the ground, his three cars were gifts. My favorite was the 1957 Buick, with flashy fins and a flat tire. 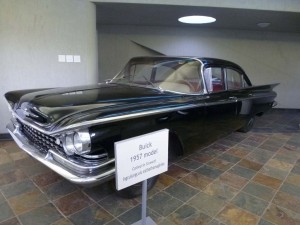 From there we walked to the village of Lobamba, a warren of stick and mud homes with a population of 8,000. King Sobuza had his royal residence there, which is how the village developed. These days many residents work at the present King’s royal residence, a few hundred meters away. Swazi tradition says once a king has died, his home cannot be touched by anyone else. Sobuza’s residence is now a crumbling amalgam of small buildings overgrown with weeds. 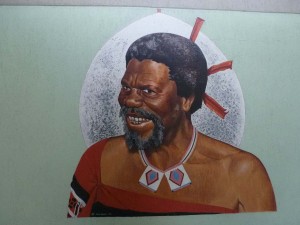 Beki, our guide shook his head as he showed it to us. “I don’t know what will happen with the current king. He has so many mansions. They are not humble like King Sobuza’s. If nothing can be done with them when he dies it will be such a waste.” 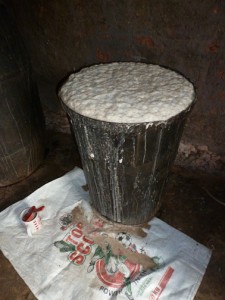 Every other person we passed called out a greeting to Beki, who lives with his mother’s side of the family in their stick and mud compound in the village. “Are you thirsty?” he asked? We nodded. Leading us to a small courtyard filled with low benches, he ordered some of the local brew. A woman brought us a large pickle jar filled with what looked like grey dish water. “Sorghum beer,” explained Beki, taking a swig. I took a small sip from the communal jar. Sour and unappealing, that was enough. Beki disappeared into the hut and then came out with a clay bowl filled with a thick white liquid. “Maize drink, non-fermented,” he explained. This was cool and sweet. Much more to my liking. 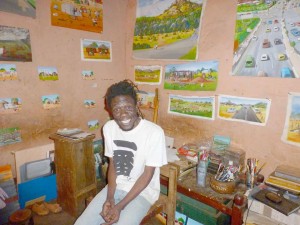 The Stick and Mud gallery owned by artist Lucky Mlotsa was next on our agenda. Peering into the dark, one-room hut, I was greeted by a small man with long dreads and a bright smile. “Welcome, come into my home and my studio,” he said expansively. Three cats were curled up on top of a huge loud speaker. “That’s for my band, we rehearse here as well,” he explained. The walls were covered with Lucky’s art, colourful paintings of Swazi life, from the Reed Dance ceremony to a depiction of the busy main intersection in Mbabane.  “I’ve been teaching some community members to paint and on Saturdays I hold children’s classes,” he said, adding, “Four of my students have won national competitions and they were on TV. That’s when I started taking myself seriously.” Lucky explained he is in the process of appealing to the government help him start an arts academy. “I want my efforts to be permanent,” he said. 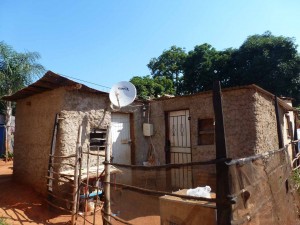 We had worked up an appetite by this time and Beki lead us to a local butchery for lunch. Picking out some chicken from the glass case, he walked over to an adjacent outbuilding containing a grill fired by large logs. The chicken was soon sizzling on the grill and when it was done we settled down to colourful plates of coleslaw, boiled pumpkin leaves, tomato and avocado salad, pap (made from cornmeal, it resembled grits), and barbequed chicken. All to be eaten with our hands. Delicious and messy. Thankfully I came equipped with Wet Ones.

We said goodbye to Beki and thanked him for showing us a little slice of everyday life…so different from the hustle and bustle of my urban existence.