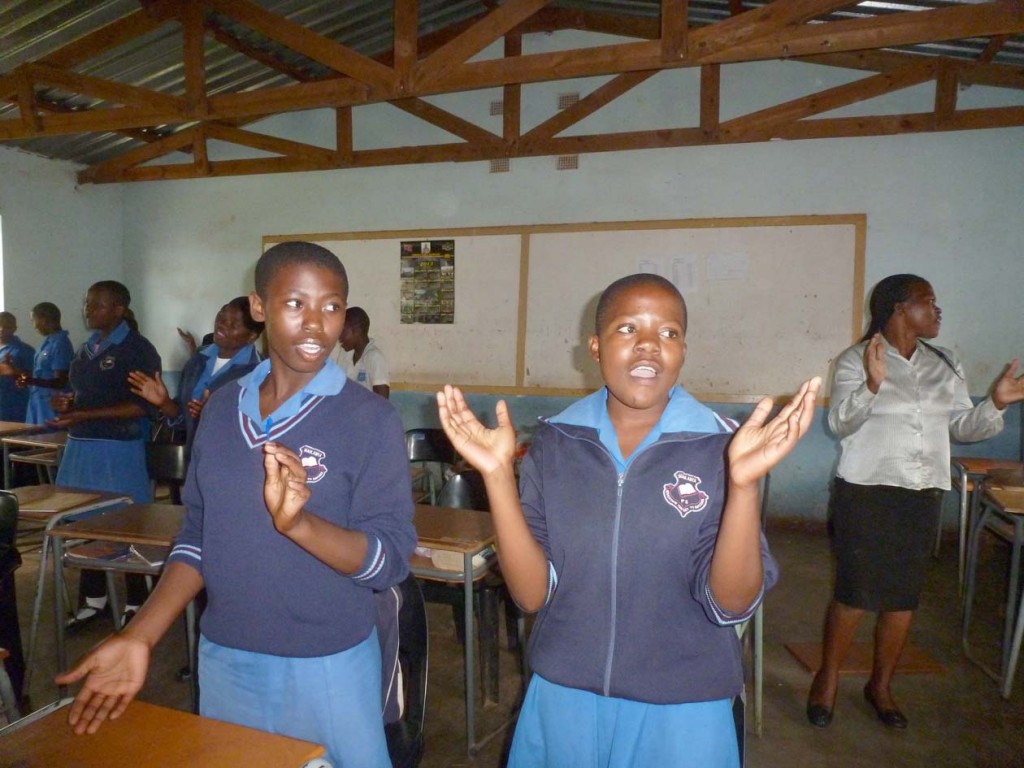 Members of the Mhlanghya Girls Empowerment Club singing the club song, The Sky is the Limit.

Last week Crossroads’ Southern Africa regional director Nikunja Nepal and board member Kathy Macpherson came to Swaziland to check up on the various projects and local NGOs Crossroads supports. One of the projects Crossroads is proudest of supporting is the Girls Empowerment Clubs (GEC) program at SWAGAA. Nikunja, Cathy and I joined SWAGAA GEC coordinator Doreen Ngwenya and visited three schools where the clubs have been established. Currently there are 10 clubs throughout the country, each with around 40 members, and Crossroads will be providing the finances to start more clubs this year. The clubs are a safe space for girls to gather once a week and share stories, plan activities, learn about their bodies and hygiene, and learn about what abuse is and how to report it to a teacher, social worker or the police. 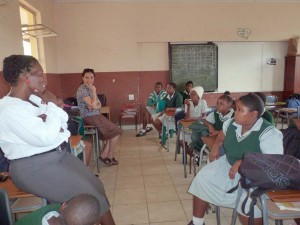 The first school we visited was Sydney Williams, a semi-public/private school in Manzini. It wasn’t the regular day or time for the club to meet, but the teacher and coordinator of the club was able to assemble around 15 members to meet with us. It was around 8:30 am and the girls filed into the classroom, dressed in their green and white uniforms. As school had just started for the semester, the girls had yet to elect their president or come up with plans for the year. But they gamely sang the “Sky’s the Limit” for us and engaged in a discussion lead by Nikunja who asked, “Do you think we need to start boys’ clubs?”  Humm. “Maybe a few responded. A high point for me was meeting a member also named Maureen.  My name is very unusual in Swaziland. You’re far more likely to meet Phumziles, Teneles or Zeniles.

The second school we visited was Mhlanghya High School. Located in more of a rural setting, the school was a little less well-funded than Sydney Williams and the students from less affluent families. This was the first meeting of the club this year so the girls were quiet and shy. Their teacher coordinator encouraged a few members to share poems and songs and Nikunja asked them what they liked most about the clubs.  “It’s a safe space,” replied one girl. “We love the exchange visits with other clubs,” responded a chorus of three. 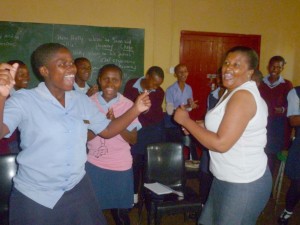 The final stop was Sigangeni High School. It was around an hour’s drive from Manzini, on a very bumpy gravel road. Due to the torrential rains lately, roads were in rough shape and we were lucky to get through.  The club coordinator, Mrs. Thobile Nkambule led the girls in an energetic welcome song and dance that was followed with poems and presentations. One member thanked the club for helping to pay her school fees last year (high school fees are around E5000 per year which is equal to or double what some people earn in a month). They told us they loved the club because it was a place to discuss their problems, and make friends. When asked if a boys’ club should be started, the answer was, “Yes. They should learn not to abuse and rape girls.” Thobile told us before the club was established there were many student/teacher relationships in the school. “The club teaches girls those relationships are not good and those have stopped. There is less teenage pregnancy.” At most Swazi schools, pregnant students are discouraged from attending school, which creates a cycle of poverty – no education, more babies, no income, and often an abuse  relationship with various partners. It was good to hear the club helped discourage these relationships. Thobile said she’d seen girls come out of their shells, become more confident and responsible. “One of our members became very assertive and took part in school debates. She was the best speaker at our school and has gone on to university.” Not all has been rosy, however. “Last year a girl committed suicide. Due to the teacher’s strike our club was not active last year. I am very sorry about that.” 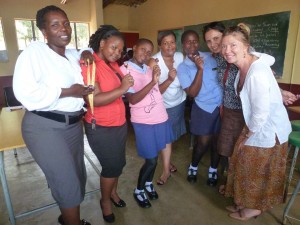 Swaziland is a difficult place for young girls. Every day there are horrendous stories in the paper about rape and abuse. The Girls Empowerment Clubs provide a much-needed service, building the confidence of young females raised in a patriarchal society. Change won’t come overnight, but the seed has been planted.

This entry was posted in Humanitarian and tagged Girls Empowerment Clubs, Swaziland. Bookmark the permalink.