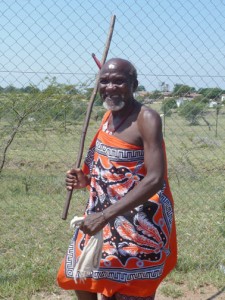 2)    Warm greetings from people you don’t know. It is common, polite practice to say hello to everyone you meet on the street. Big smiles from strangers are also common.

5)    The way women carry babies on their backs, tied in place with a kanga (cloth), towel or blanket. The children put their arms around mom’s neck while she ties them into place. You always know a woman is carring a baby when she walks towards you and see the knotted blanket and two tiny feet sticking out.

6)    Well-behaved children. I have not heard one tantrum in the grocery store! 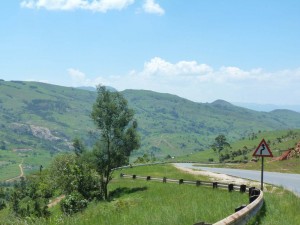 Green beauty on the way to Pigg’s Peak. 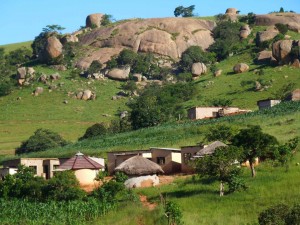 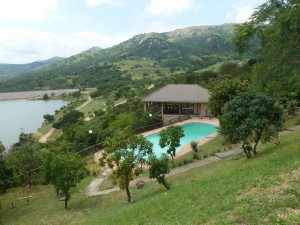 A stunning lodge — Maguga Lodge, near the dam, in northern Swaziland. 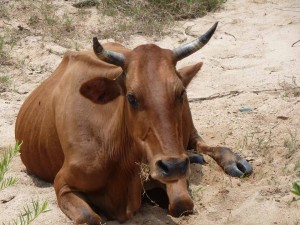 Cows are money in the bank for Swazi people. 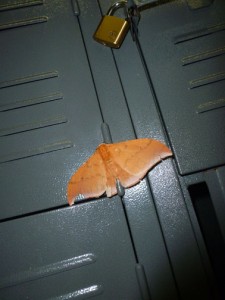 A beautiful moth who alighted on my locker at the gym.

2)    Kombis. This mode of public transport, mini-vans, legally hold around 15 people. Often they get packed with around 25. Perfect TB incubators.

4)    Cows and goats on the road – one of the main causes of car accidents. Often owners let them wander freely, grazing by the side of the road, but they also tend to pop out in front of vehicles.

5)    The phone system. There are new networks – one is for cell phones, the other for landlines, and never the twain shall meet. Both are government owned, but the cell-phone company prevails (MTN). If you try to call one from the other, it is VERY expensive. Actually all calls are quite expensive. Texts cost around 10 cents (Cdn) each and a 10-minute cell call will cost around $1 (Cdn). Ouch!

6)    Government process…Lots of talking, but little action. Activists have been pushing for the Sexual Offences and Domestic Violence law to be passed for more than 10 years. The judicial system must rely on laws that are very out of date and perpetrators are often given light sentences.

7)    The belief in demons and witchcraft. Very disturbing and very prevalent.

8)    Reading announcements of police officers getting 30% pay increases, while teachers (who make very small salaries) can’t get a 4.5% increase. (Teachers went on strike last year, were fired by the Prime Minister, then pardoned by the King but still can’t get their 4.5%.)

10)                   The fact that women have constitutional rights, but many don’t know it. They continue to suffer gender-based violence and just figure that’s a woman’s lot in life – some even think it means the man is still interested in her. 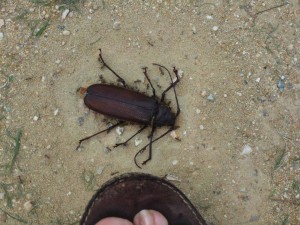 A dead giant being devoured by ants.

1)    The Sunday Time’s editor is named Innocent. He jumps at every opportunity to publish scandal, often based on rumor. One instance was publishing a nude photo of a Swazi embassy employee in the UK provided by her angry ex who was blackmailing her for reneging on a financial agreement. Not really news, and not so innocent.

2)    A man was chewed up by machinery in the sugar mills. The only way they could identify him was by testing for DNA in the sugar. His name was Lucky.

This entry was posted in Destinations and tagged Culture, People, Politics, Swaziland, Travel. Bookmark the permalink.