Climbing to the Clouds: Hanoi to Ha Giang

Posted on September 8, 2014 | Comments Off on Climbing to the Clouds: Hanoi to Ha Giang 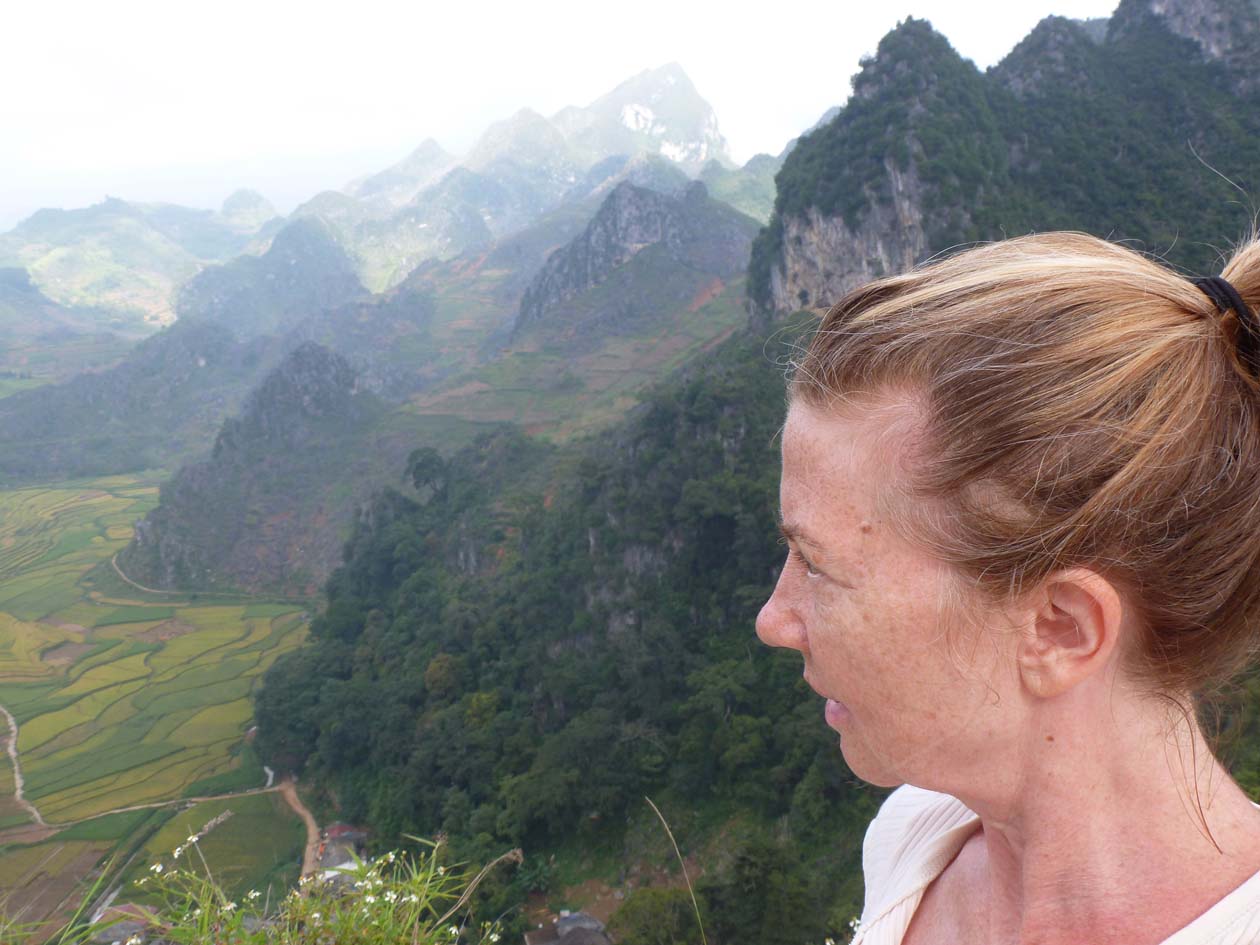 The view from the top of an old French fort in Dong Van.

On Labour Day weekend (same in Vietnam as in Canada), myself and four friends hired a car and headed north: destination Ha Giang Province. Ha Giang contains Vietnam’s northernmost point along the Chinese border. Two of the gals I was traveling with, Ashley and Camilla were training for a half-marathon, so we took every opportunity to exercise…more about that to come!
After driving for around six hours (plus a 1-hour lunch stop) we reached the town of Ha Giang, capital of the province. We stayed at Truong Xuan Resort, a welcome reprieve after all that cramped car time. First thing was to stretch out on the porch of our bungalow overlooking the River Lo. All rivers in Vietnam are muddy, it’s the nature of the beast in such a rain-drenched climate. Even so, it was serene watching the water wind its way past while locals cleaned their fishing nets on the shore. Dinner was at the hotel as it had started to sprinkle and we were tired. We all order versions of nem or spring rolls. I had the fresh version, veggitarian. Ashley had same but fried. We also had salads. Everything was dripping in mayonnaise. Strange! A hotel specialty, I’m sure. Oh well, it was washed down with frosty Hanoi beer.
In the morning, after a breakfast of Vietnamese coffee (thick and sweetened with condensed milk), eggs and fruit, we packed up the car and went to see the hotel manager. He had arranged our visitor’s permits ($11 each) and distributed them to us after we settled up (dinner, accommodation and permit cost us around 500 VD each – $25). Next on our itinerary was the town of Dong Van The road was all switchbacks through the mountains. Stunning scenery and scary precipices It was slow going, but beautiful and we stopped often to take photos or scamper up to look-out posts. One memorable spot proudly showed off its “Fairy Bosom,” two identical green mounds surrounded by lots of other mountains. I passed on a souvenir framed photo of the foliage fringed décolletage.
Dong Van was packed with people, all there to particpate in an annual flute festival. Since it was so full, we had to stay at a hotel I would not recommend – Plateau Terrace. Terrible! Moldy walls, no light, construction on one side. Oh well. We got there late in the day, so we poked around the town a bit trying to find a place for dinner. Easier said than done. Some restaurants were booked up, others were out of food. We finally found a place that served a delicious vegetarian Bun Chau (Broth, noodles, herbs and the lady kindly put in tofu instead of the usual meat). I am not usually vegetarian, but I have been leaning that way since I got here. Seems a bit safer. Plus, you get up close and personal with a lot of the animals and it just doesn’t feel right to eat them (ducks and piggies in particular).
We watched a bit of the festival, lots of swirling, colourful costumes, lots of speeches and finally a bit of flute playing. Two men usually play at once, circling around each other. The traditional garb for men here is wide dark pants, black Chinese-style jacket and a little black cap or beret. Sometimes they throw on a scarf and look like jaunty Frenchmen.
Vietnam is home to 54 ethnic minorities and, the Tay, Dao and Hmong live in the Ha Giang region. Everywhere we looked, the men’s clothing was consistent, generally black on black, the women, however, wore colourful skirts, scarves and tunics embellished with intricate embroidery.
Day three was the big walk. We had the driver take us to Meo Vac, 22 km away first thing in the morning so we could attend the market bustling with vendors of veggies, fruit, rice and livestock.
Then we walked the 22km back to Dong Van. Yeow. It was hot. Stunning scenery and parts of the way we were accompanied by friendly locals who would disappear down the mountainside when they came to their homesteads. Luckily there was a half-way café to get a cold drink and rest our feet. The whole trek took about six hours. Thankfully my blisters didn’t come up until the last 5 km. At the end, a cold beer never tasted so good.
Next day was back to Ha Giang and the lovely Truong Xuan Resort. Instead of eating at the hotel that night we ventured into town. On the menu? Duck, pork and horse. I was still full from a roadside Bun Chau lunch, so I passed.
Before heading back to Hanoi the next day, we made a detour to see the Lung Cu flagpole. Marching up 154 steps alongside many patriotic Vietnamese vacationers, we finally made it to the top of Dragon Mountain, for a stunning view of China, 1600m above sea level.
Driving back to Hanoi, we were all a bit tired and sore, but also thankful we’d been able to see this breathtaking northern region.
This entry was posted in Destinations and tagged Vietnam. Bookmark the permalink.