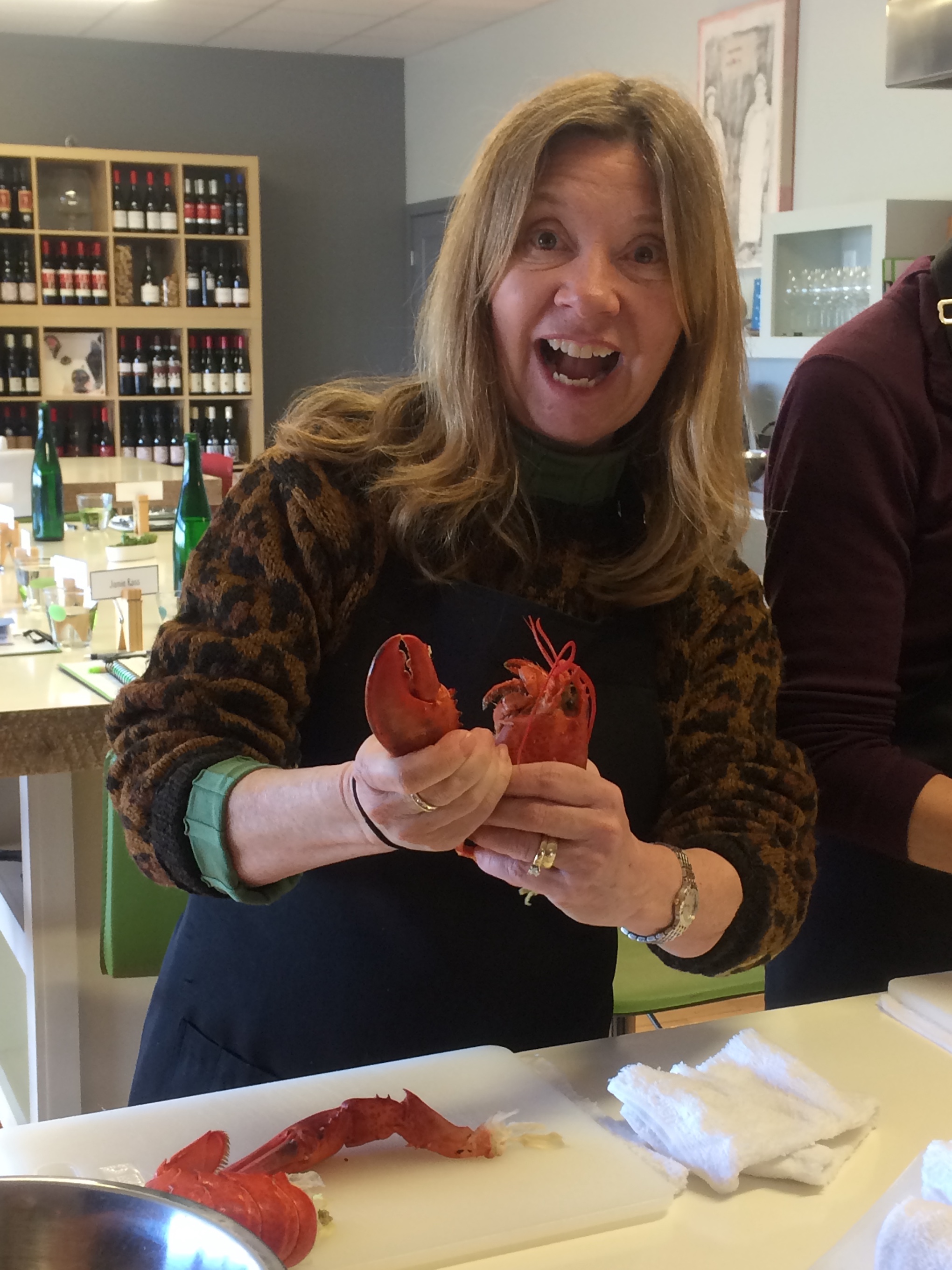 I can now tick off a place on my bucket list! Shaped like a fish hook, the Iles de la Madeleine are part of Quebec, but closer to Prince Edward Island. I flew in from Quebec City and it took 2.5 hours. The other option is to drive to Prince Edward Island and take a five-hour ferry from Souris. In the summer there is also a St. Lawrence cruise option.
Since these islands are known as the lobster capital of Quebec, I was determined to enjoy some of the bright red crustaceans, along with the amazing crab and other seafood that is so plentiful here. 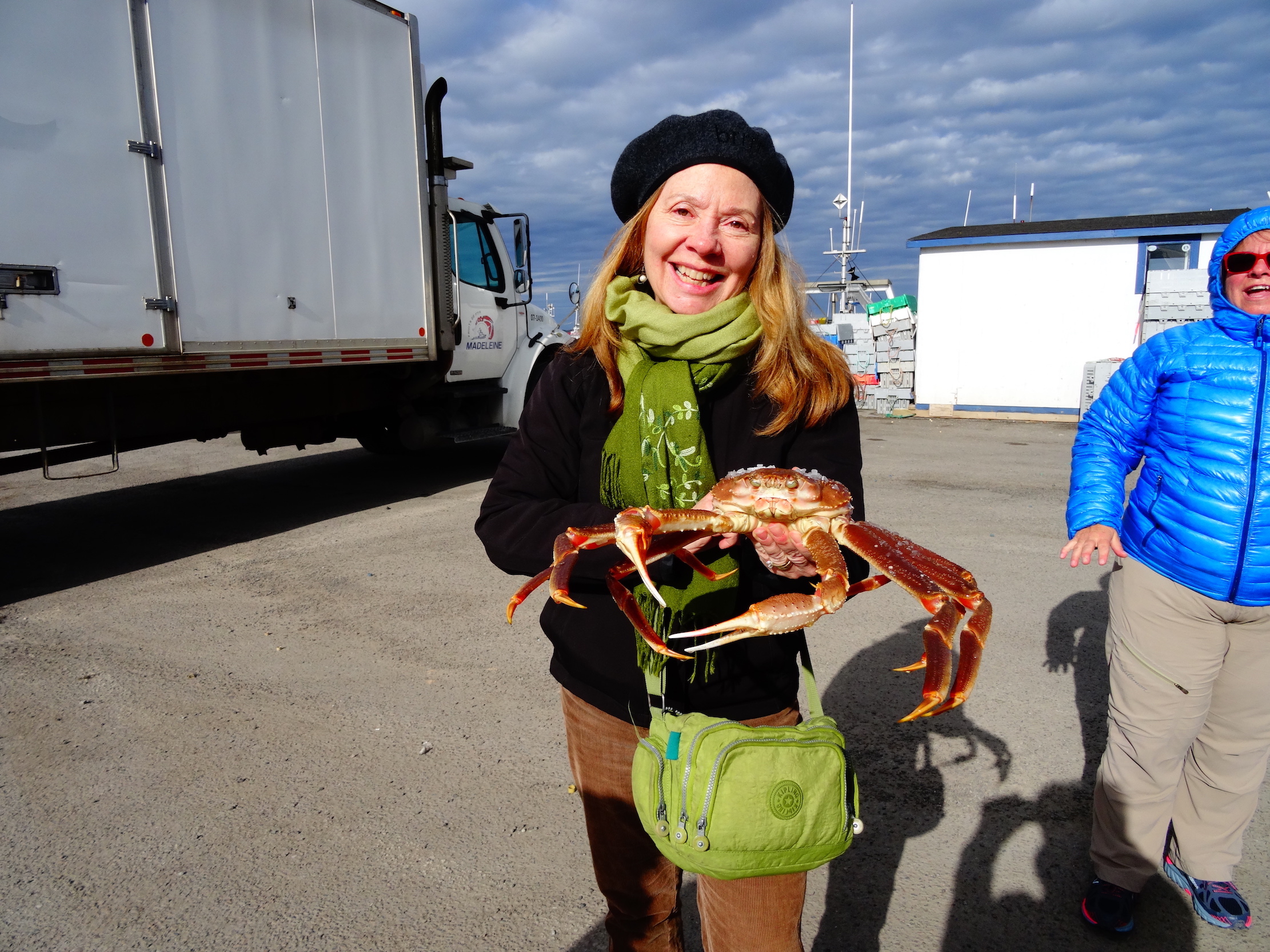 Lunch at Vieux Couvent in Havre-aux-Maisons was mussels – fat and sweet. Lucky me, I stayed one night in this gorgeous place, in Mother Superior’s room! A former convent, Domaine du Vieux Couvent offers spectacular views of the sea and the charm of a historical building. There are 11 rooms in the old convent and six apartments in the presbytery. 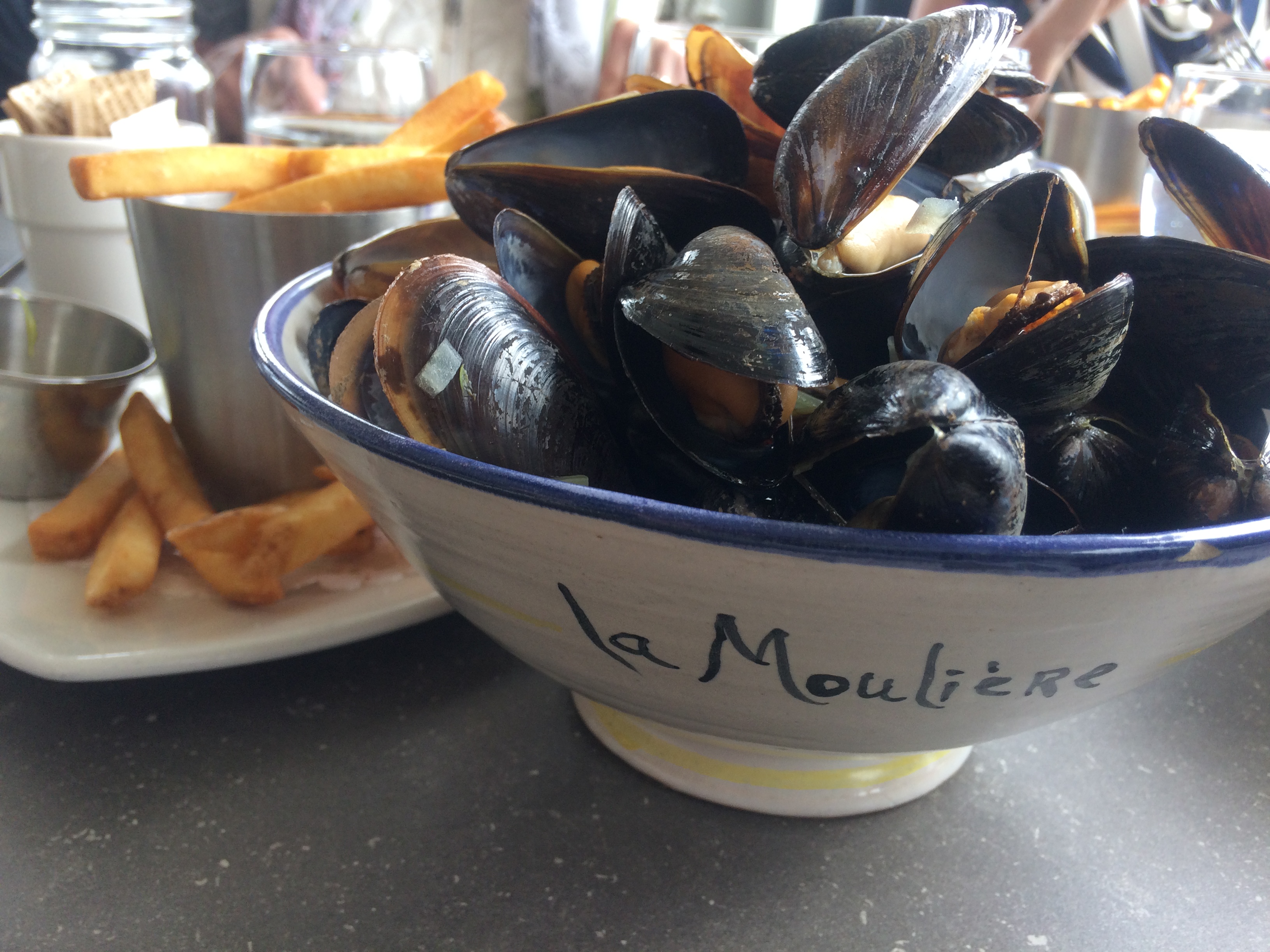 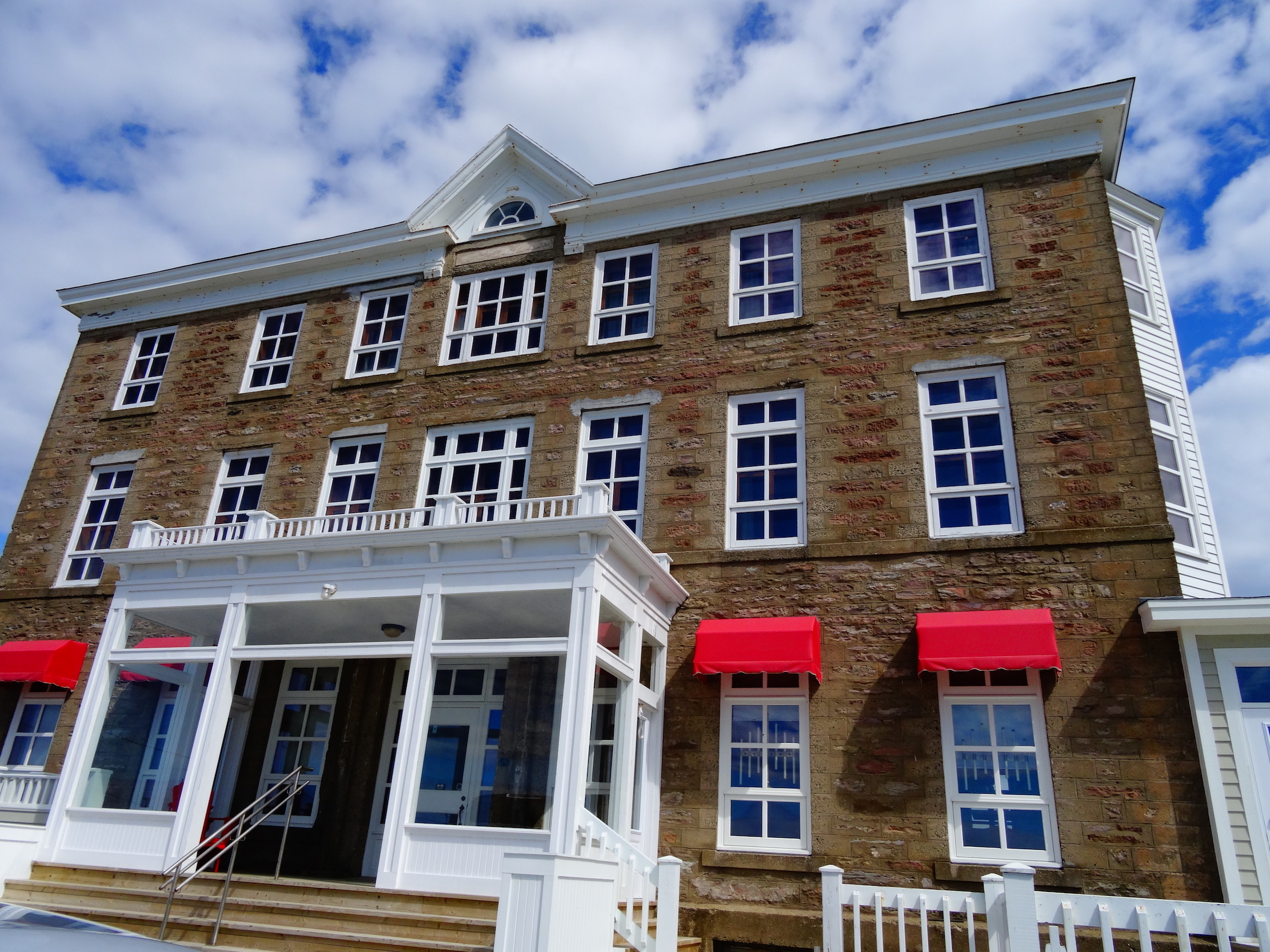 We drove to Old Harry Beach where a guide from Auberge La Salicorne showed us the marvelous, but dangerous beach (strong currents), named by National Geographic magazine as one of the best in the world. 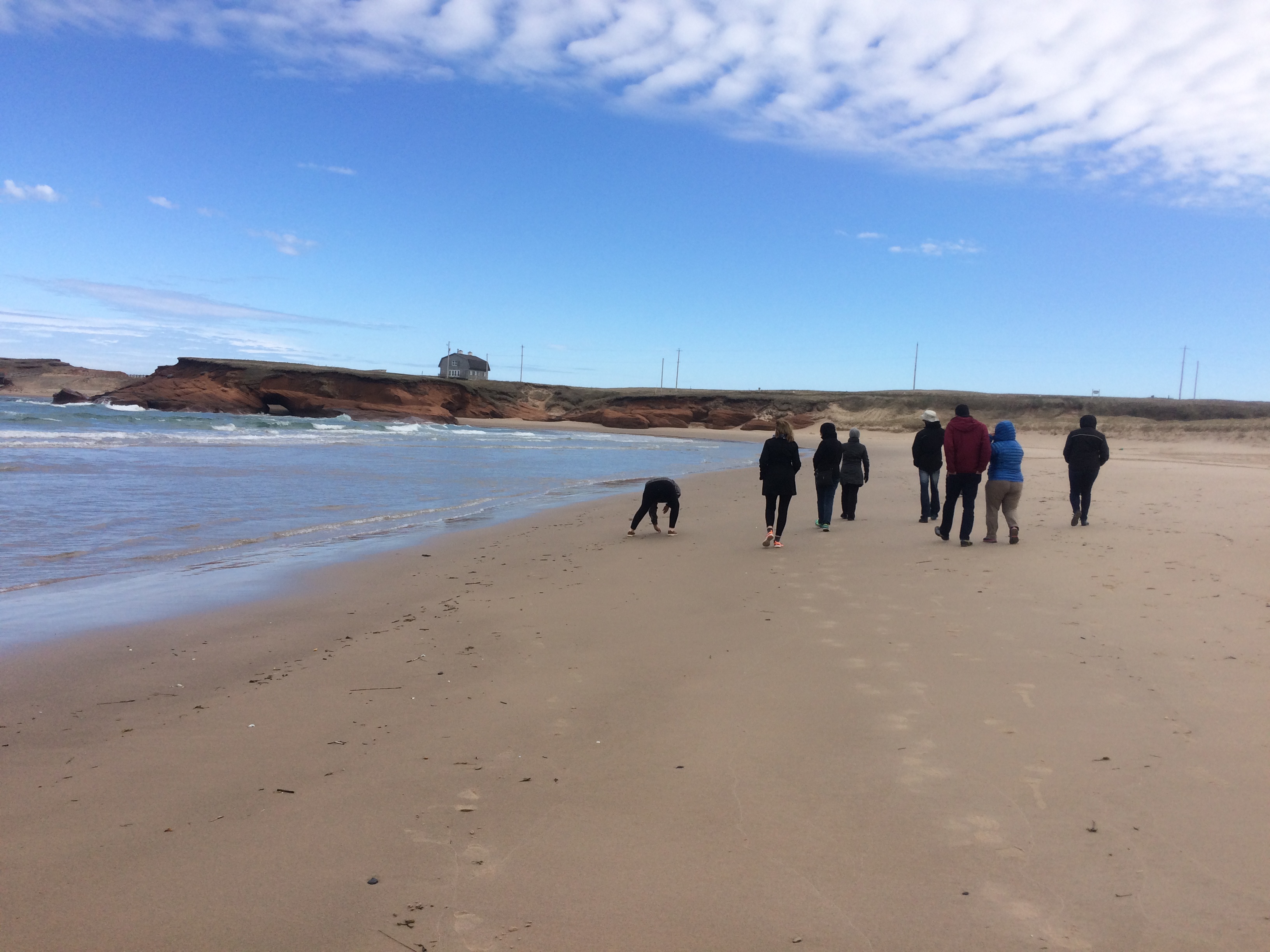 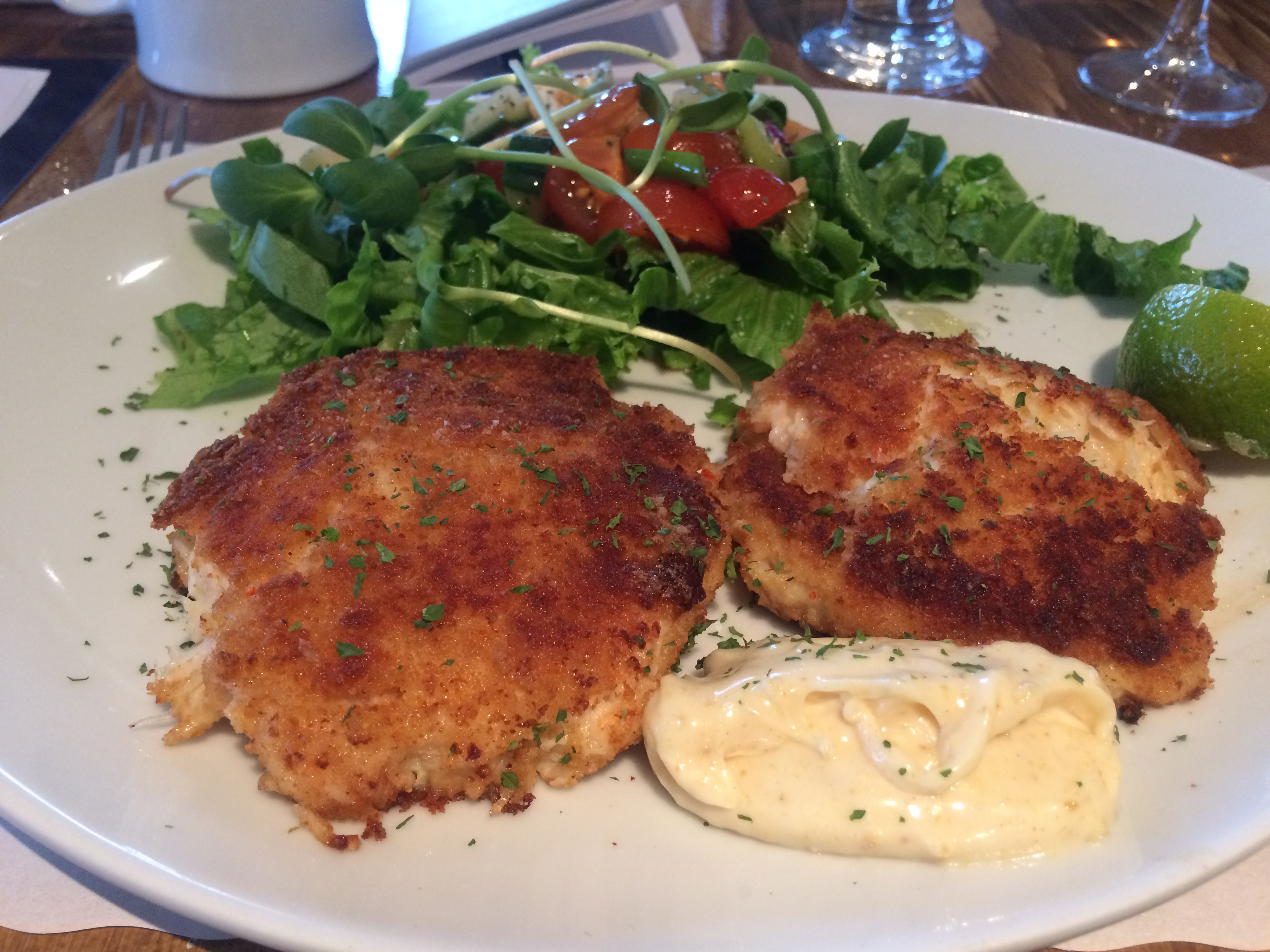 Got up at 3:30 a.m. to see the fishermen take off from Grande-Entrée port, the lobster capital of Quebec since 1994. Basque fishermen started coming to the area in the 16th century and Scots settled on the island at the end of the 18th century. Today there are French and English communities on the islands and boats are named in French or English, often for the owner’s children. I liked the one called Little John. 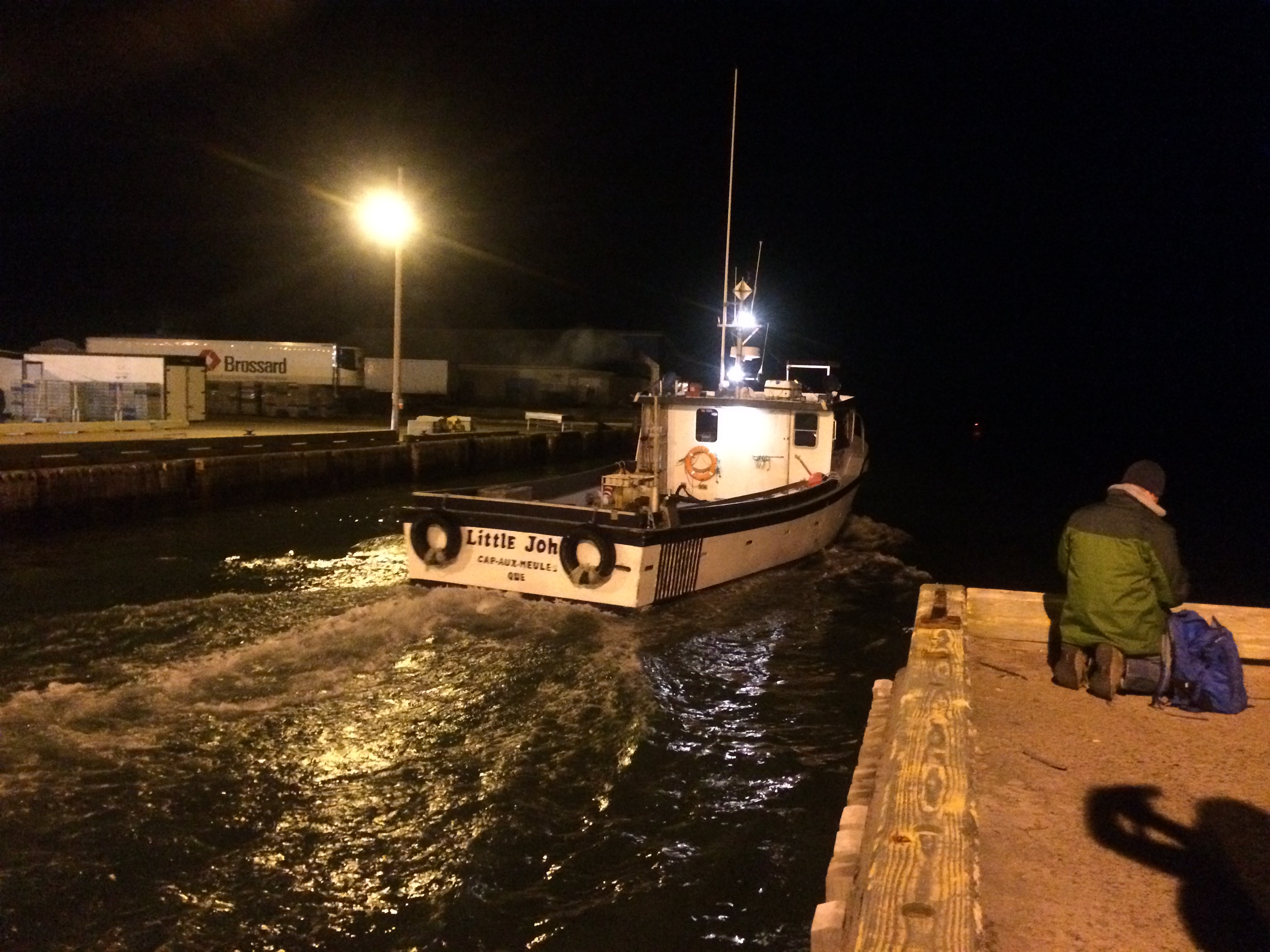 FOOD DAY!
Havre-aux-Maisons…
At Fromagerie Pied-du-Vent’s economuseum we tasted delicious soft, creamy cheeses – Pied-de-Vent is a raw-milk cheese with a lightly washed rind. Could see the cheesemaker through glass, and read all about the ancient breed of dairy cattle that produces the milk for the cheese. 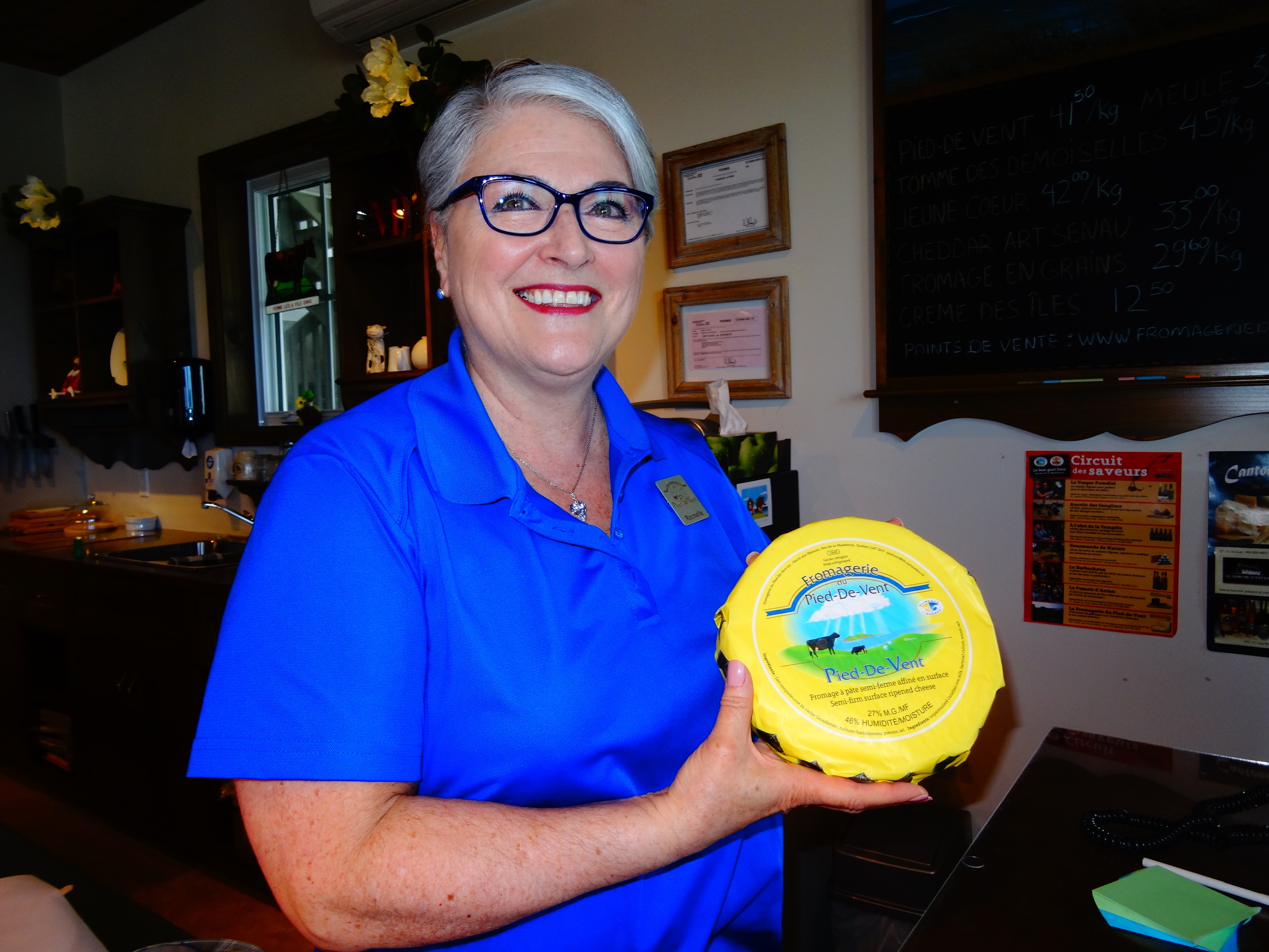 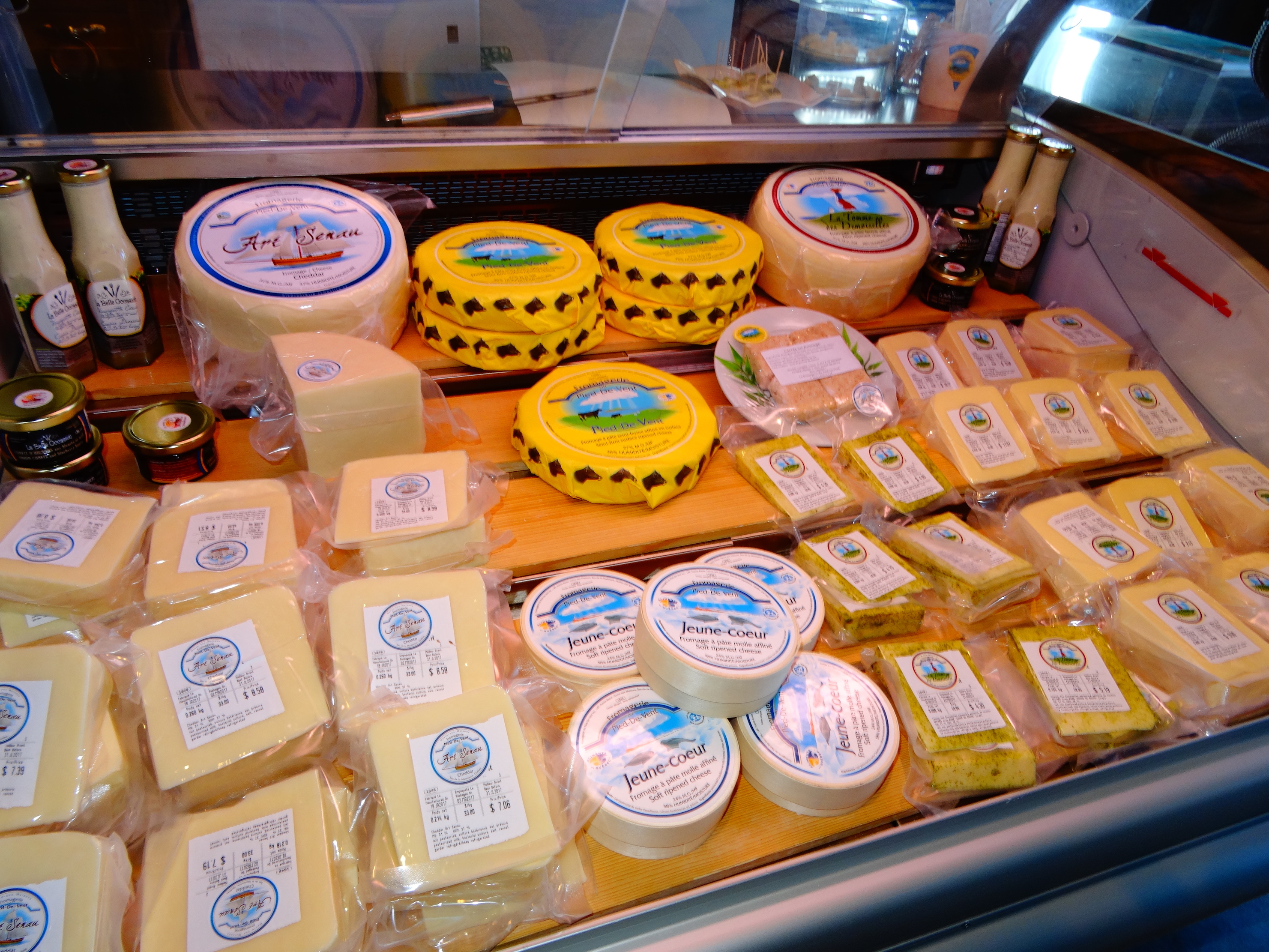 At Le Fumoir d’Antan we tasted smoked herring and got a demonstration of how the fish is smoked the old fashioned way. 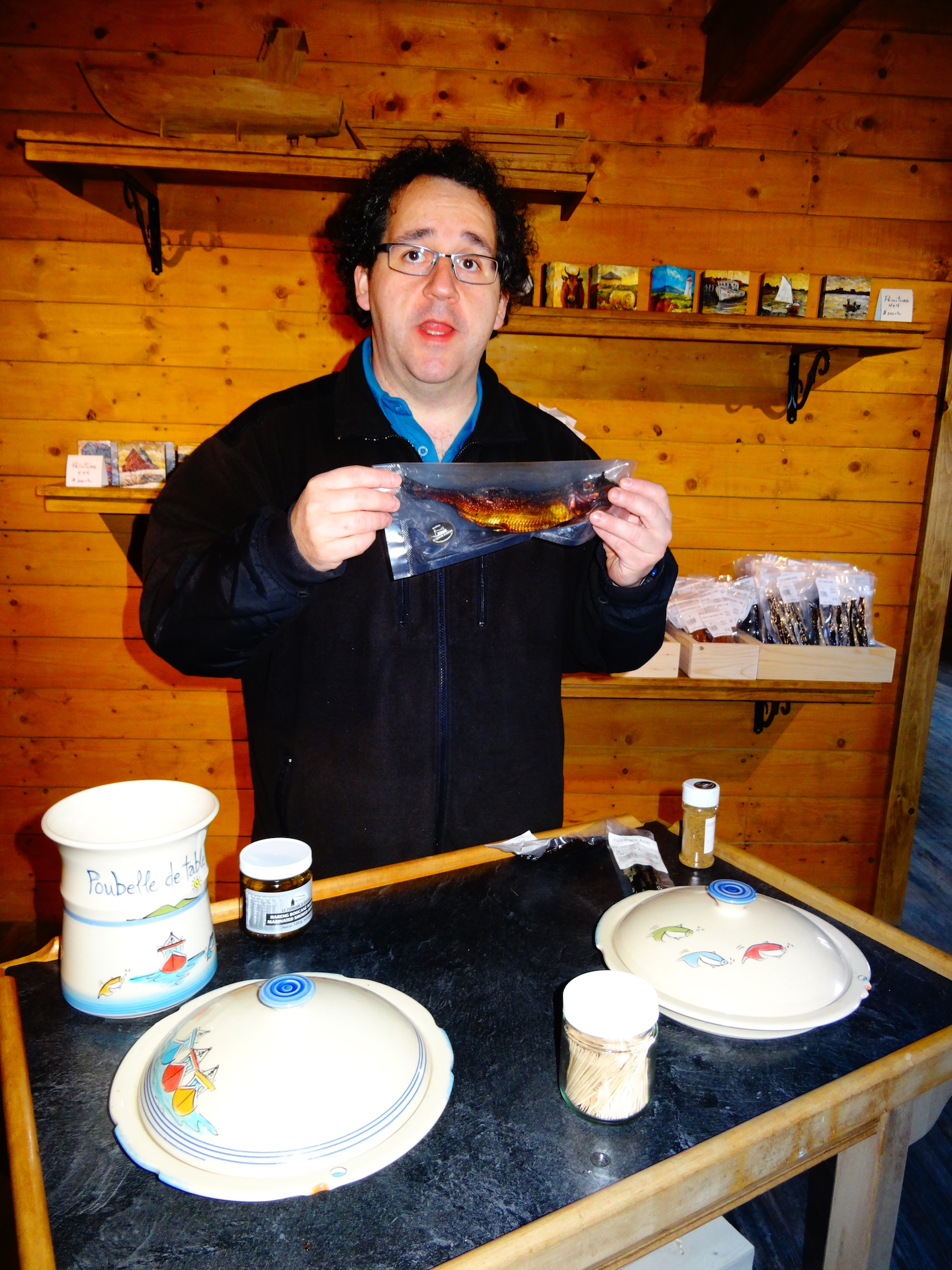 Verrerie La Meduse was a glass blowing studio where Sophie Bourgeouis and Catherine Chevrier-Turbide showed us how thier delicate glass objects are made. Workshops are available, but we just watched a demo and admired the lovely items for sale – jellyfish paper weights, whimsical fish keychains and glass lightshades. 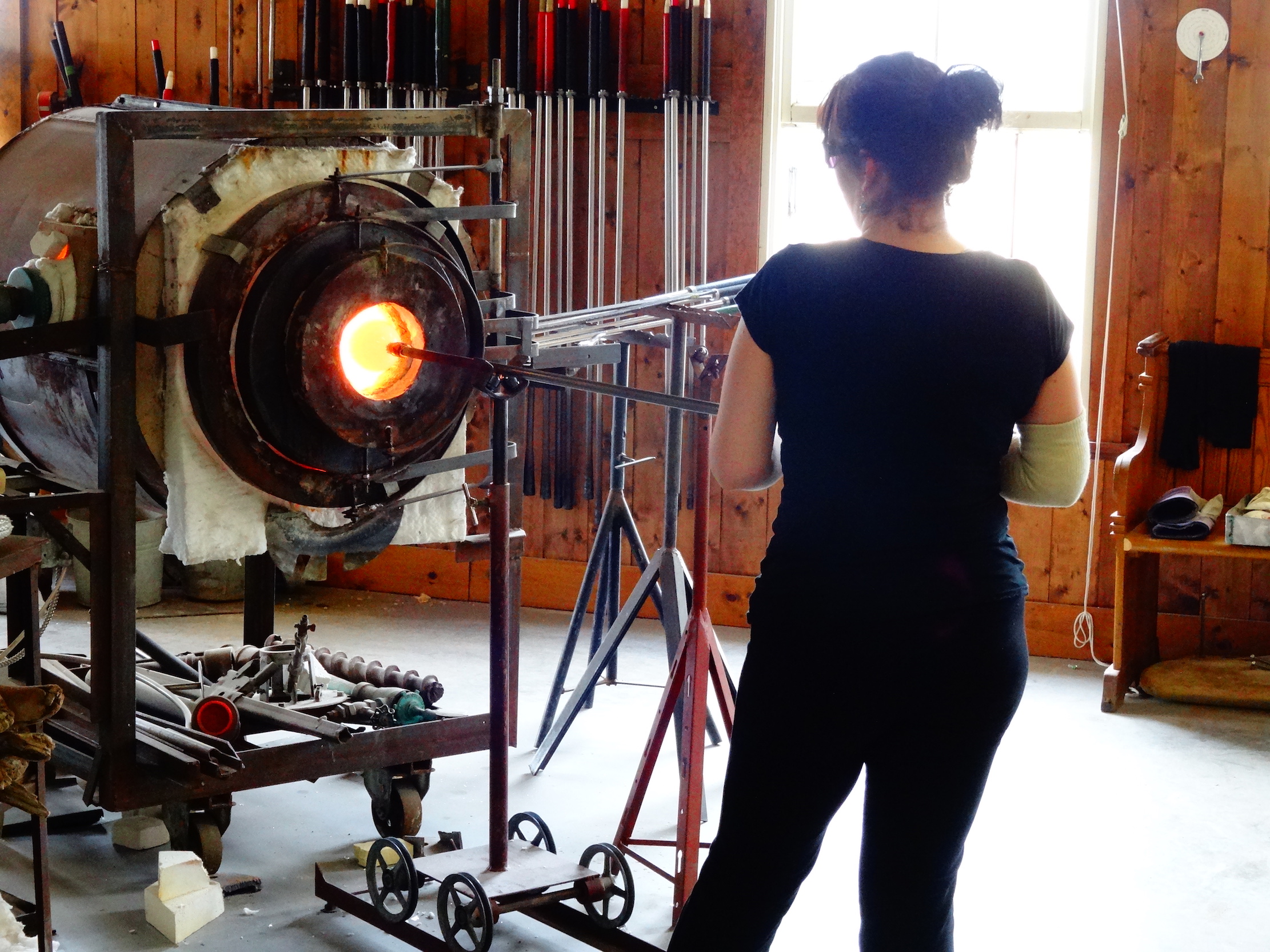 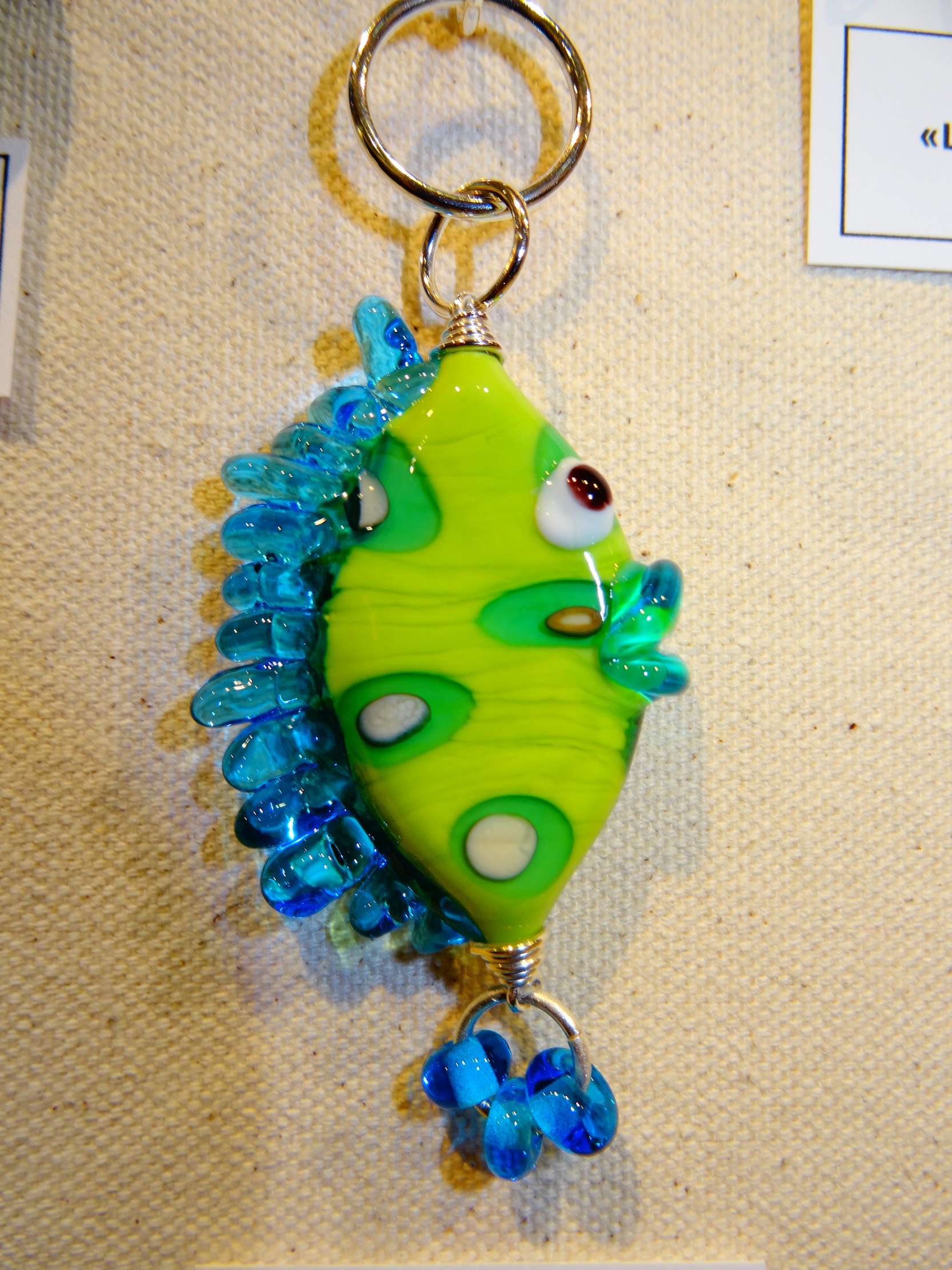 Gourmande de Nature is where you can get hands-on cooking lessons that feature local products. We had an amazing lobster session with owner/chef Johanne Vigneau (right), who also owns Table des Roy restaurant (finest dining in the Iles de la Madeleine), and her colleague Évangeline Gaudet (left). The space was light and airy, filled with condiments and tasty treats for sale as well as a gorgeous test kitchen. We learned how she uses every bit of the lobster, including boiling the shell for her amazing bisque. 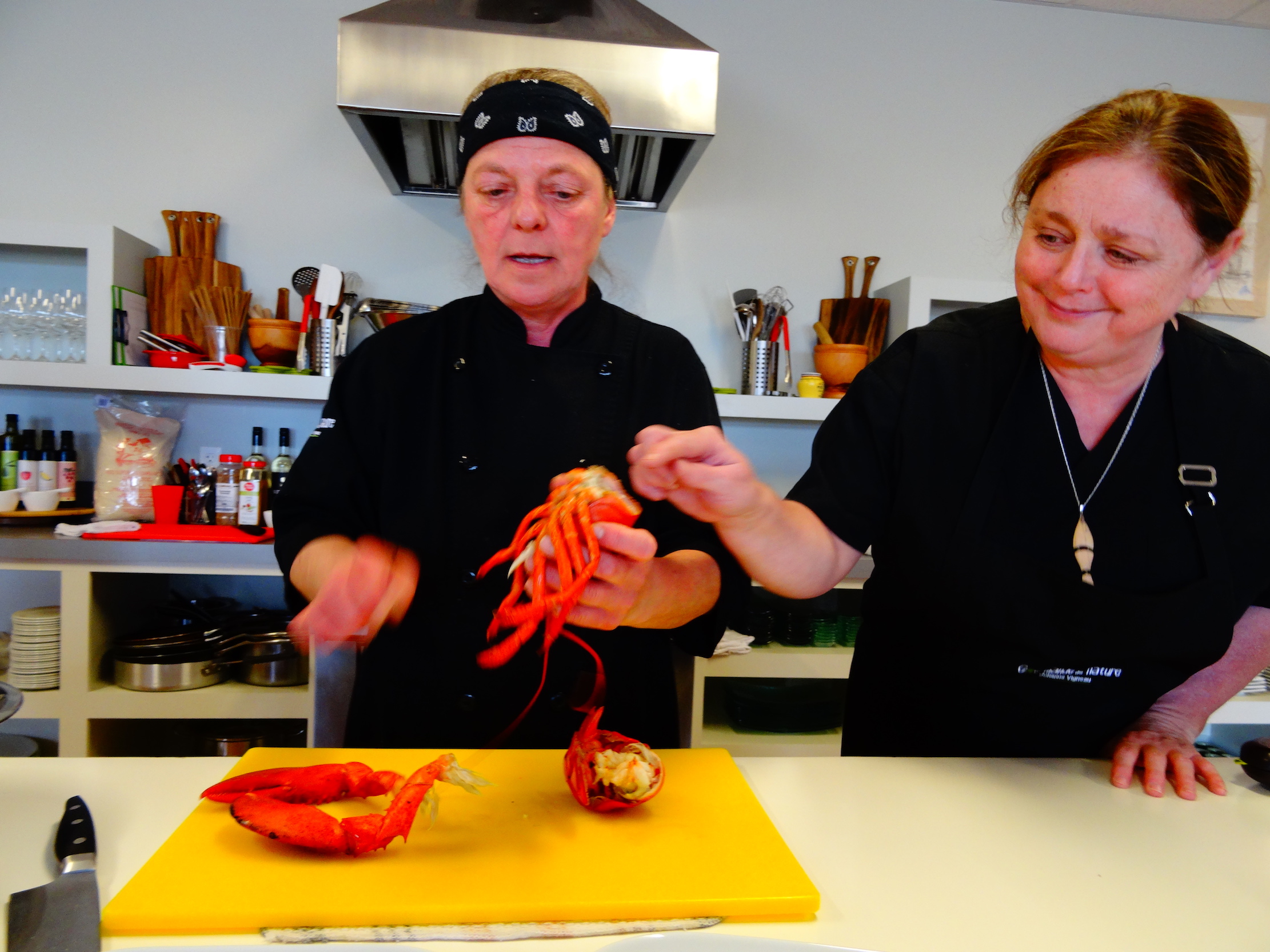 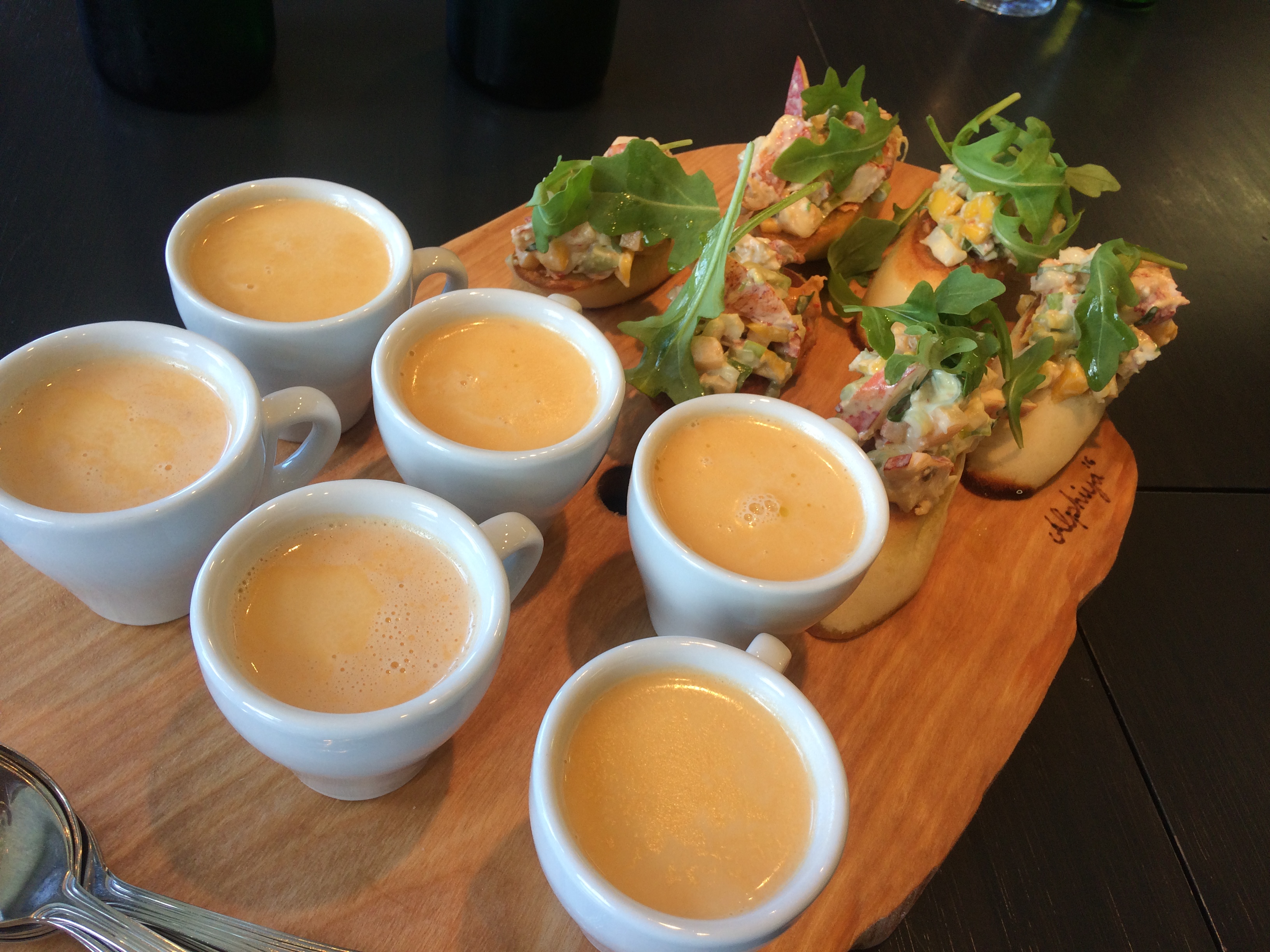 Had a tasting at À l’Abri de la Tempête microbrewery where unique brews included a smoked malt using locally grown barley. Other ingredients in the line include wildflowers, algae, and fresh herbs. 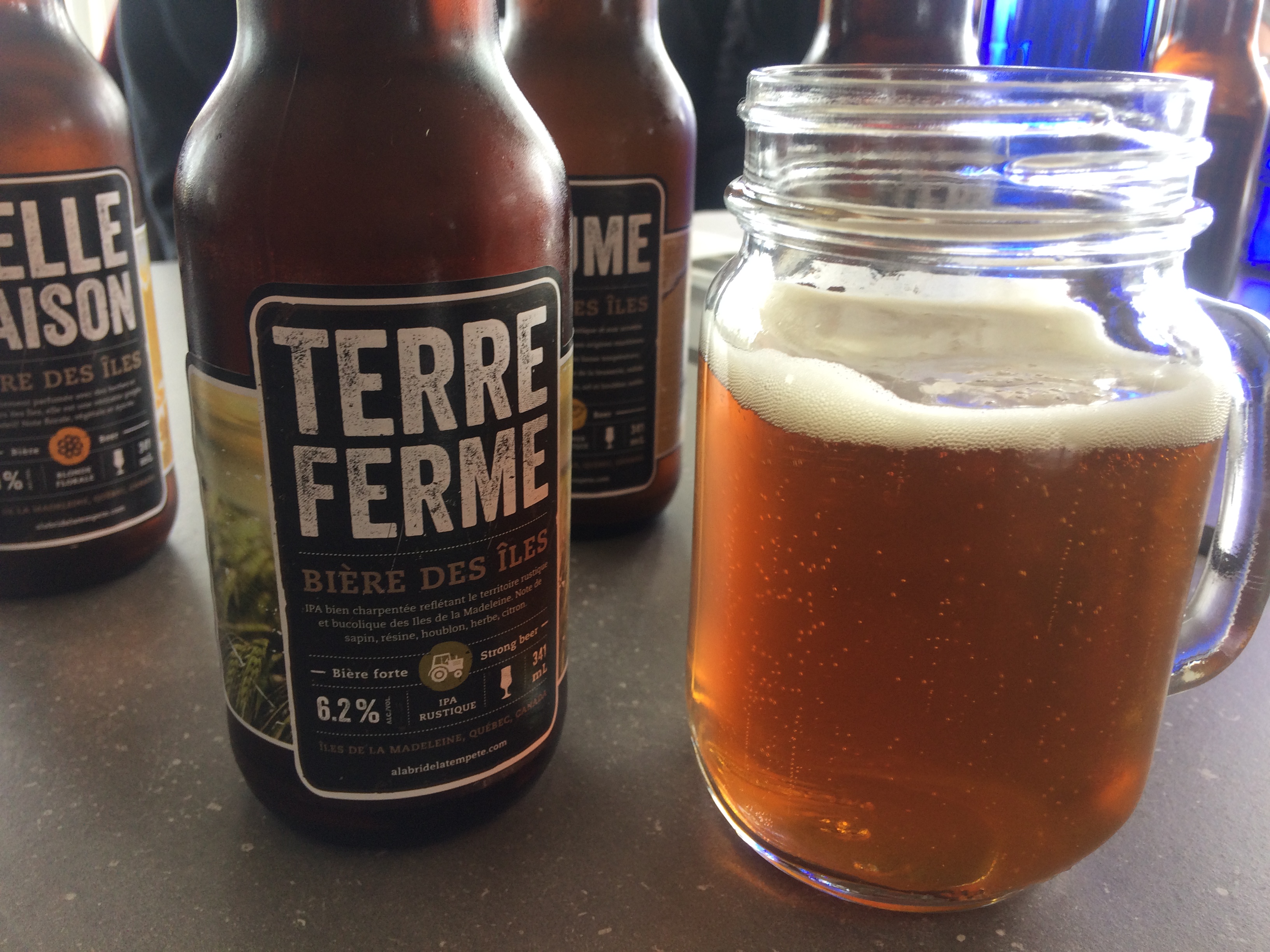 Dinner was an amazing tasting menu at Table des Roy Restaurant. Owner chef Johanne Vigneau and colleague Évangeline Gaudet outdid themselves. Johanne’s nephew Sebastian Vigneault (at the back) made sure the service was impeccable. 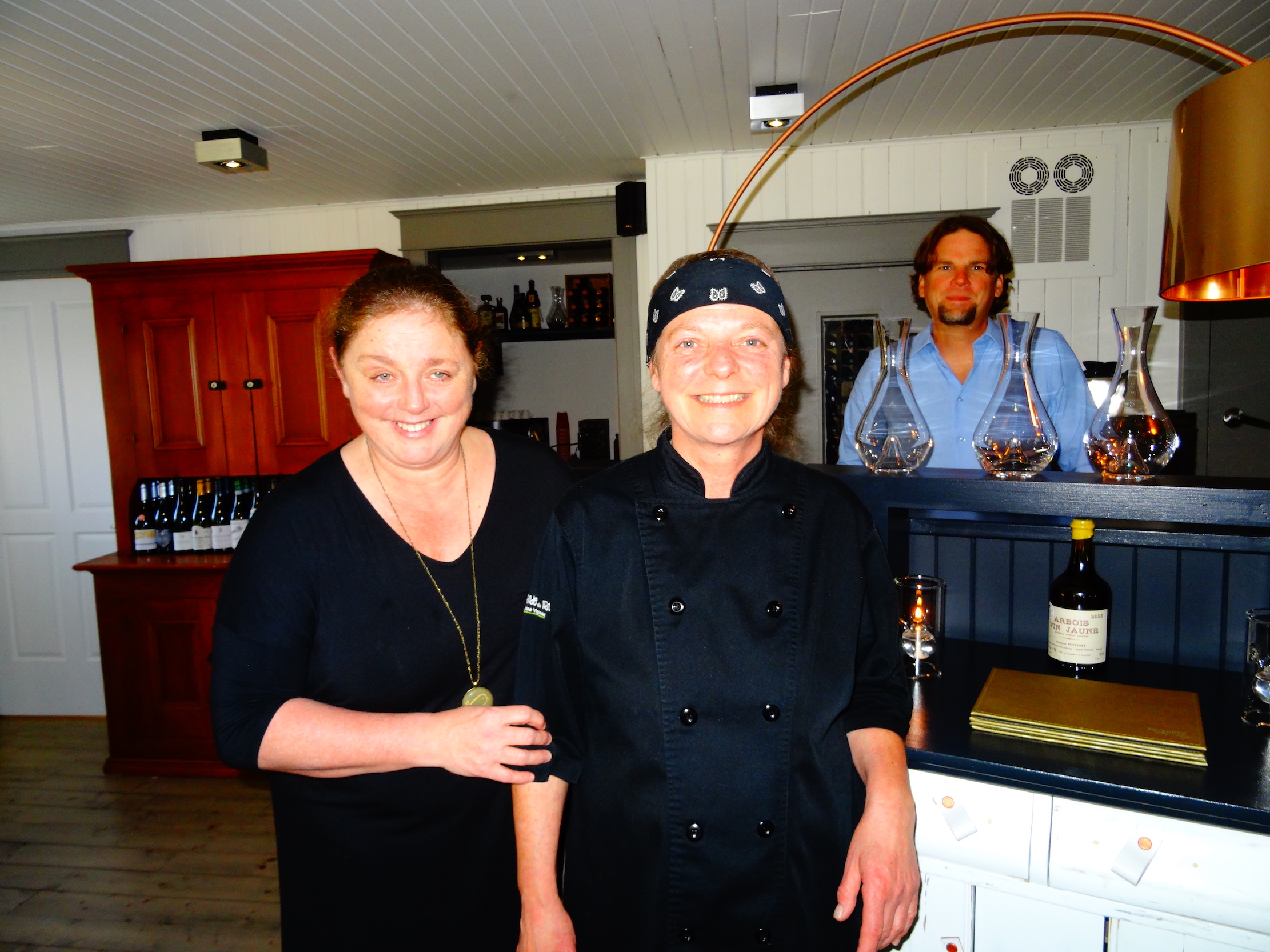 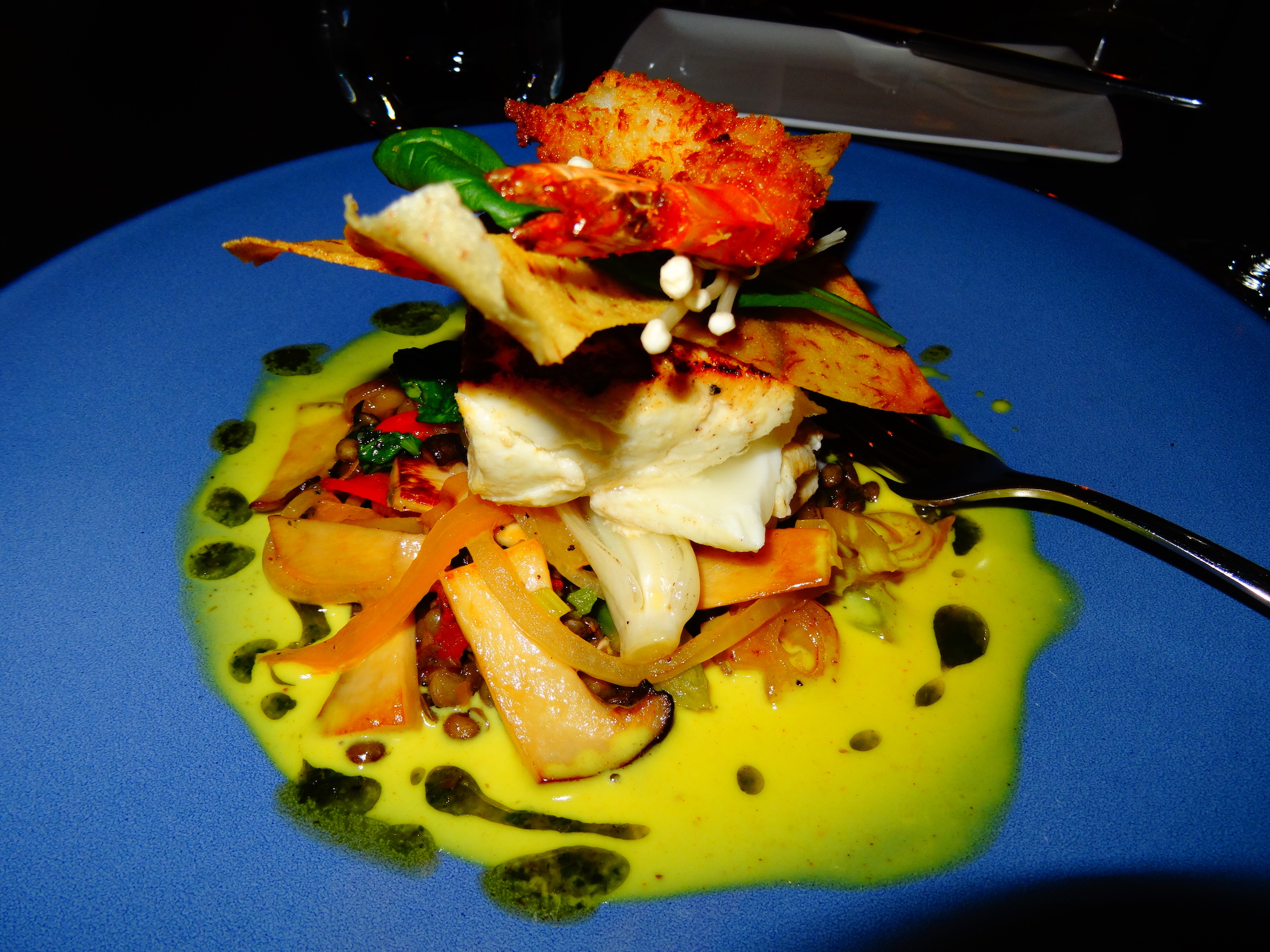 Another highlight was the Musee de la Mere. Walk through the front door and above you hangs a whale skeleton. Our guide, Michel Boudreau, was very animated and funny. He was used to working with kids, which was just fine with our group! 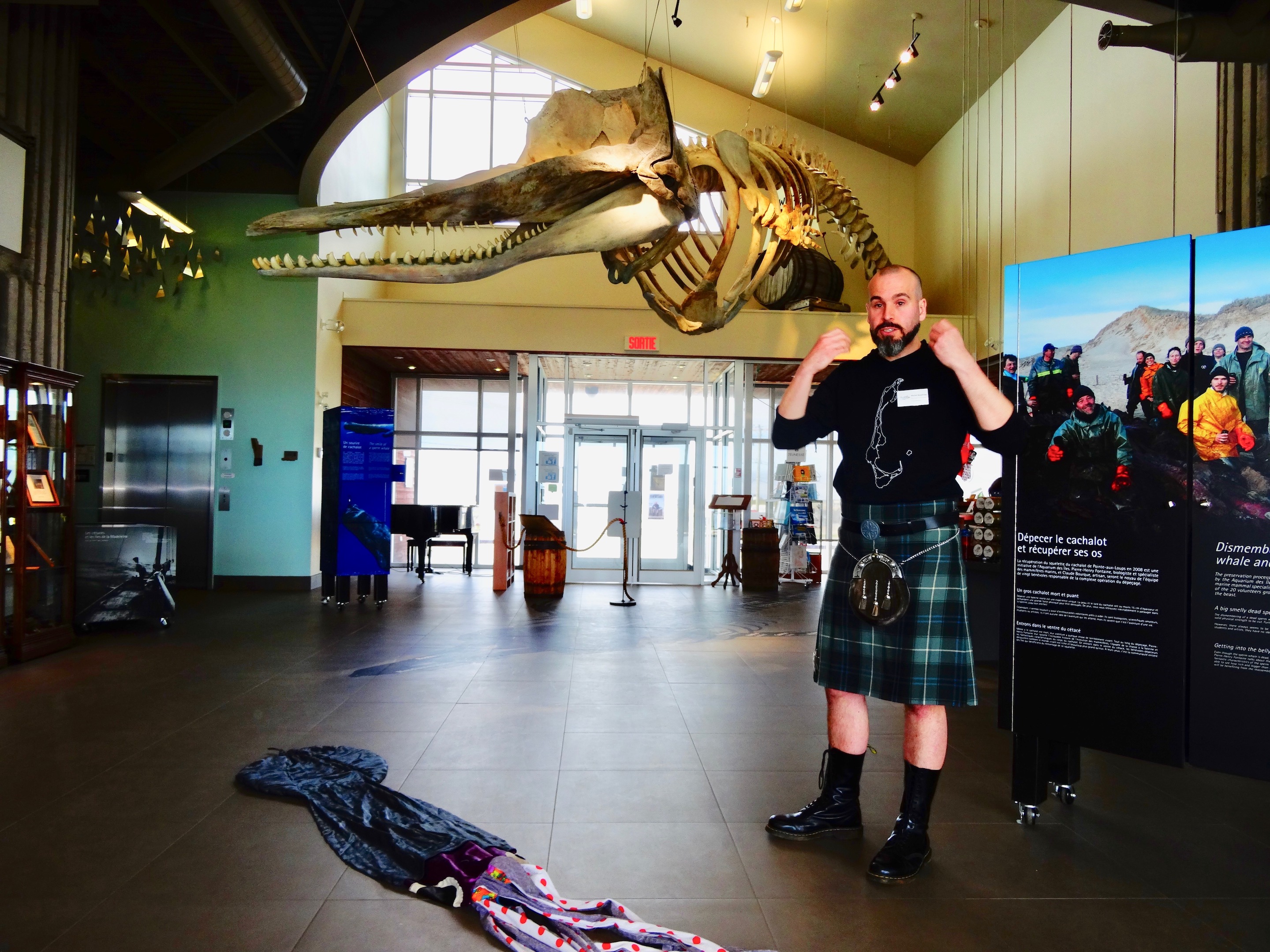 Lunch was at Café de la Grave where I tasted the seal poutine. Surprisingly unsalty, but chewy. Who knew? Located in a former general store built around 1865 it was warm and cozy and we even had the pleasure of a little piano music! 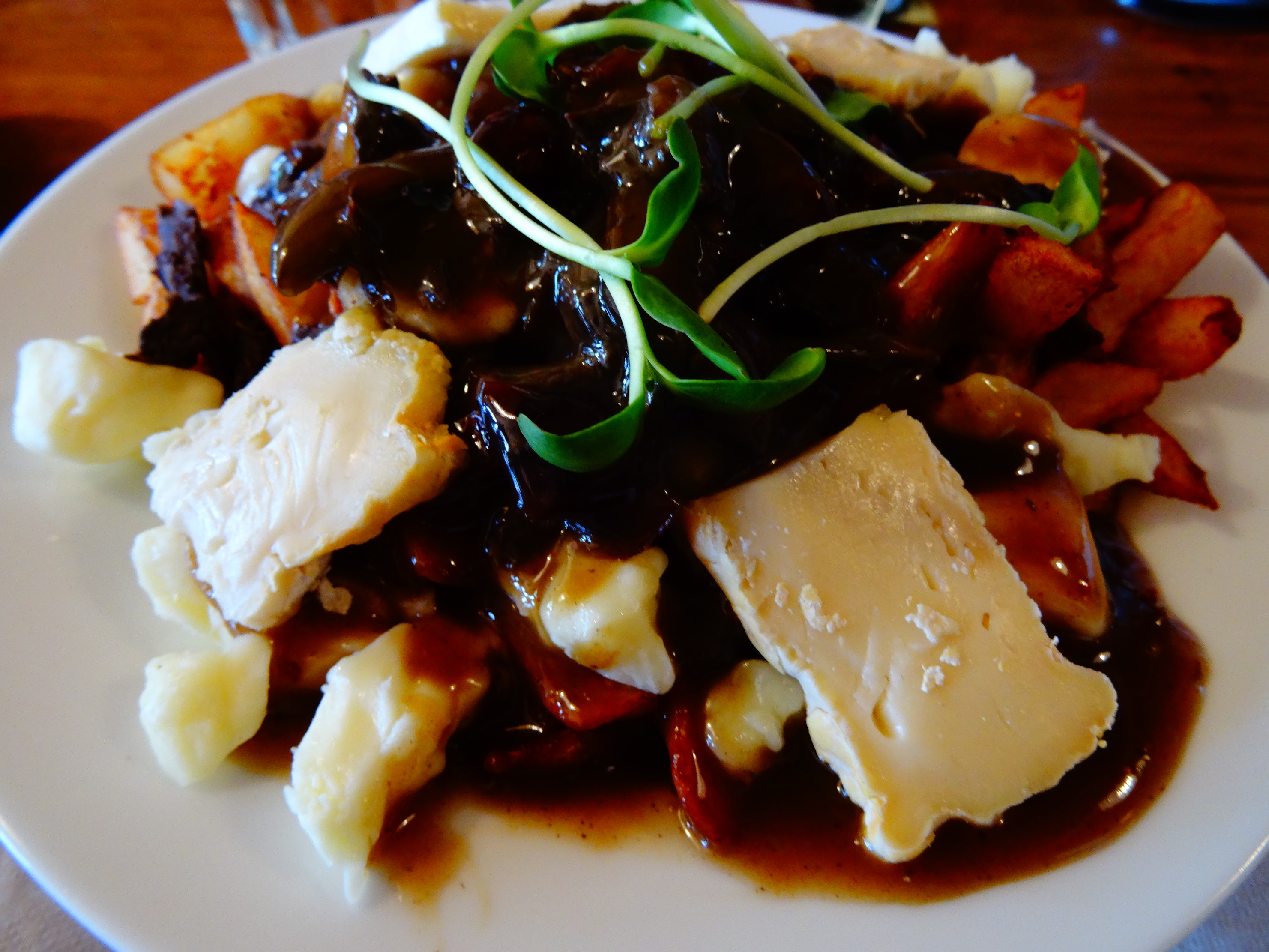 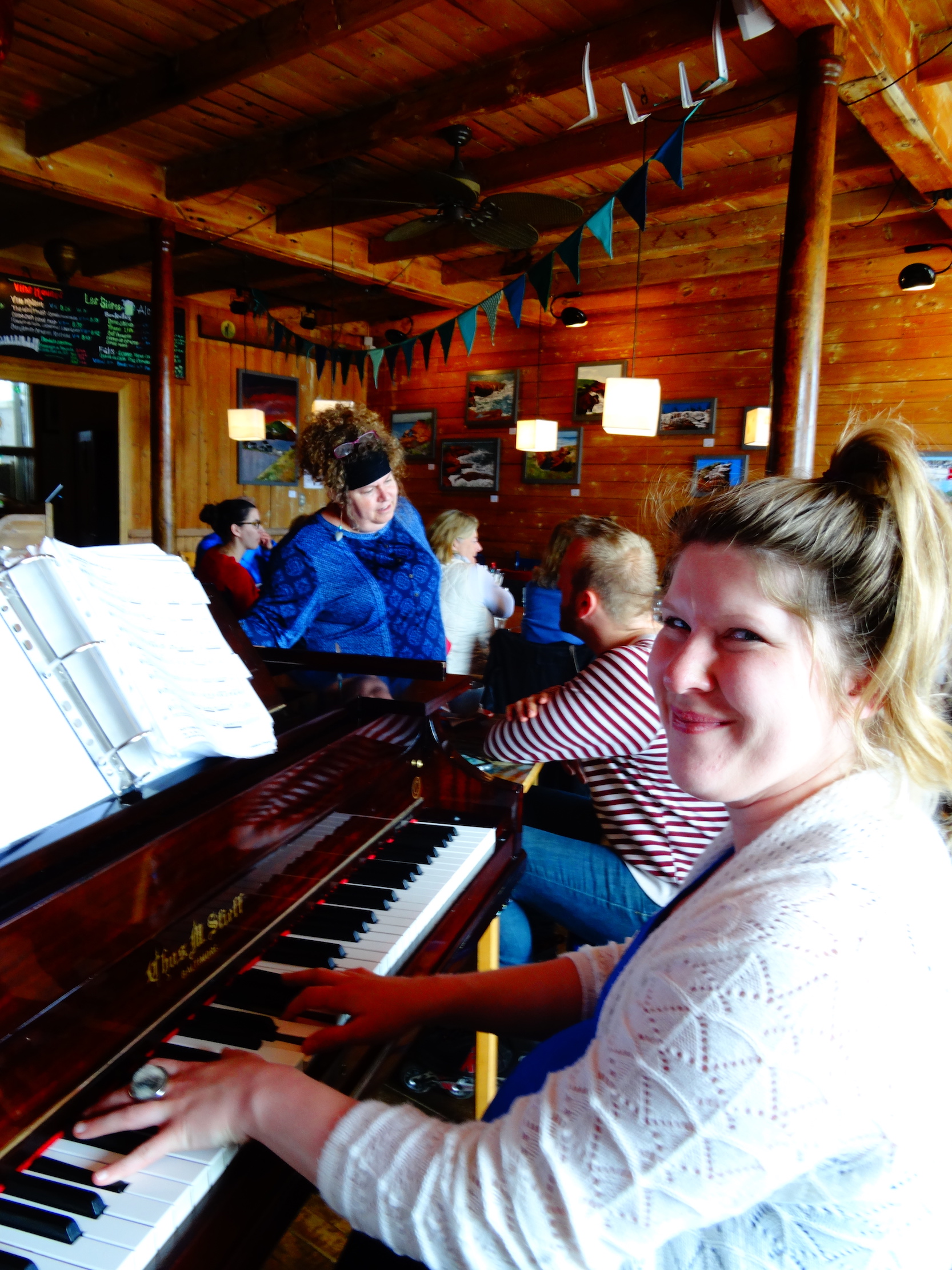 I walked around the little main street and saw a jeweler who polished local stones for his creations. I also a souvenir shop that along with requisite maritime souvenirs had hand knitted socks and touques.
At the Artisans du Sable, part of the Economusee network, we perused a multitude of sand sculptures – very unique.
Our dinner that night 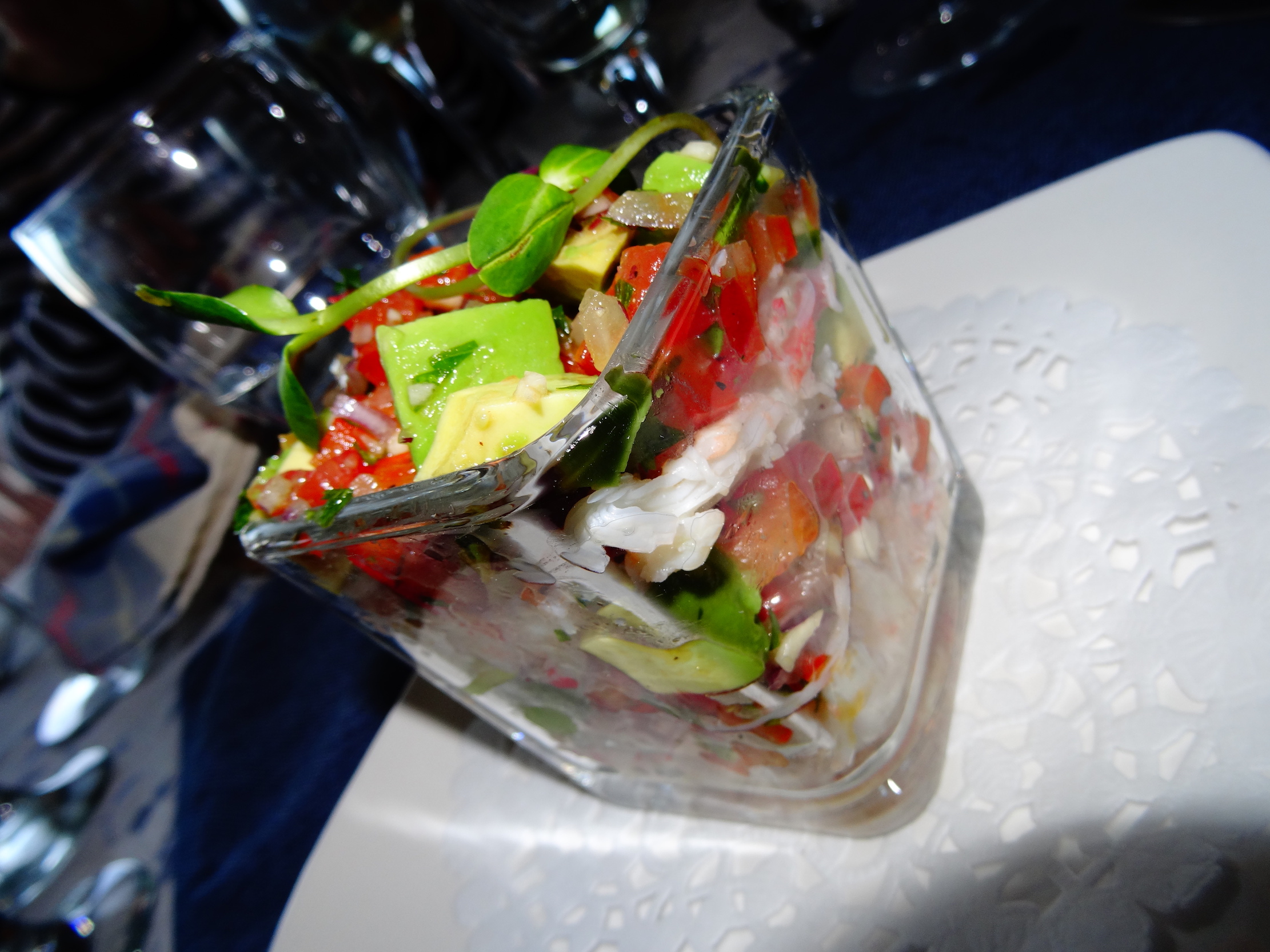 was at Auberge chez Denis a Francois, the highlight being a crab avocado salad that was superb.
Our final night was at Auberge Havre-sur-Mer. I loved this place! A heavenly perch over a beach and perfect for relaxing on the balcony. I even had a soak in the hot tub, overlooking the sea.
Before leaving the islands, we had lunch at Accents Resto Bistro of Château Madelinot Hotel. I’d advise having the lobster roll. It was the wrong time of year for us, but the hotel offers packages including a helicopter excursion to the nearby ice floes in February to mid-March. This is where you can see cuddly white seal pups and their sleek dark mommas nearby.
What a wonderful hidden treasure the Iles de la Madeleine are. Not easy to get to, but definitely worth it.