Posted on August 3, 2018 | Comments Off on Peterborough: Canoes, Coconut Rum and Wicked Vodka 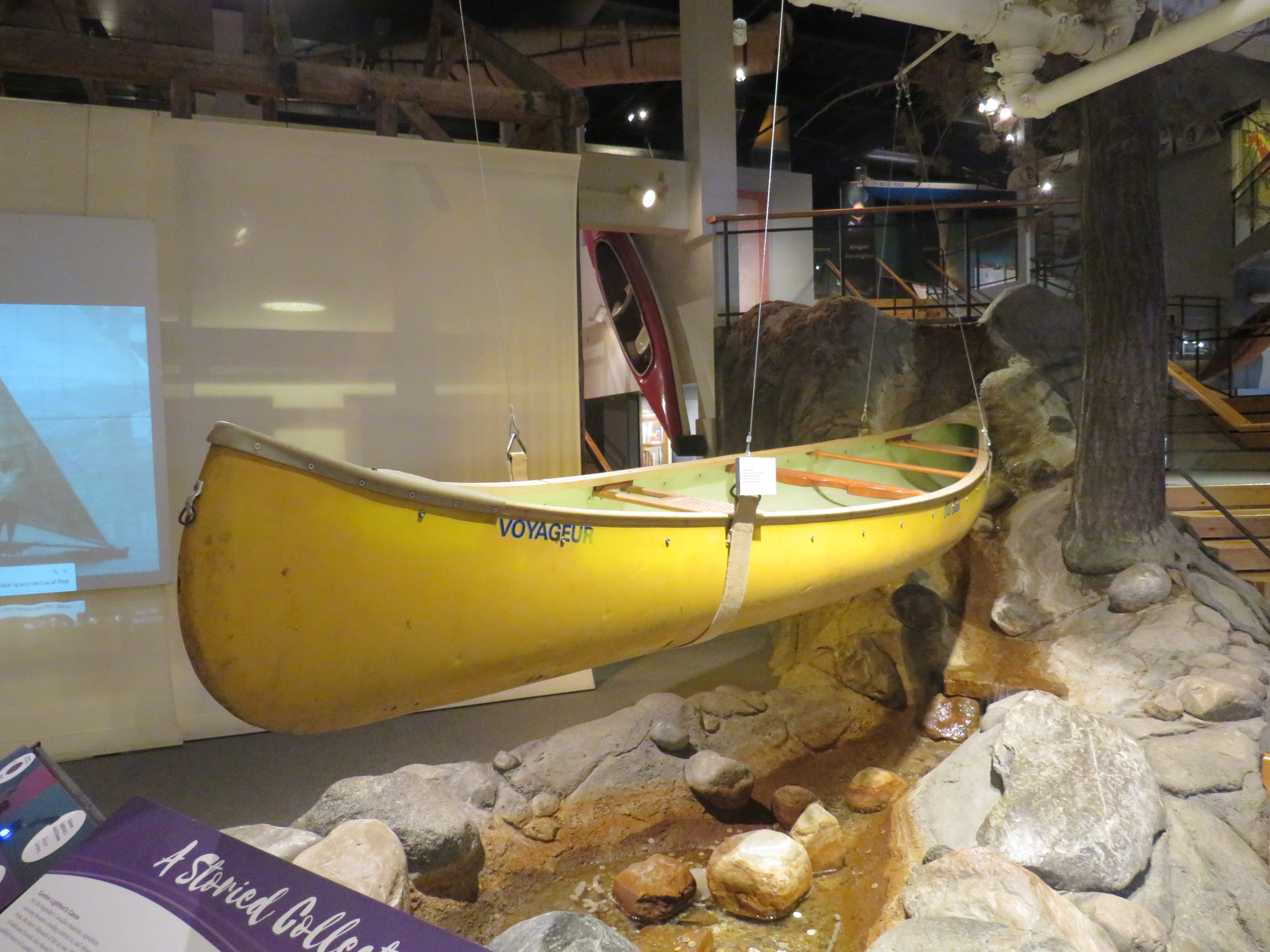 Once upon a time, Peterborough, in the heart of Ontario’s Kawartha Lakes cottage country, was a manufacturing centre, home to General Electric and Evinrude Outboard Engines. It was also “the canoe-building epicenter of the world,” according to Kelly Jessup, Peterborough and the Kawartha’s Economic Development marketing officer. Quaker Oats and tourism are the city’s primary drivers now, but back in the day the Peterborough Canoe Company was one of the biggest players. Today, the canoes built in this small Ontario city surrounded by more than 100 lakes, are by small, hand-crafted operations.
The first thing I spied at the Canadian Canoe Museum (with more than 600 canoes it is the largest collection in the world) was Gordon Lightfoot’s Old Town canoe.In the 1970s, he paddled the Nahanni River and flipped it. You can still see the scars on his beloved “Canary Yellow Canoe.” The second item to catch my attention was Pierre Trudeau’s buckskin jacket that he wore paddling in the Northwest Territories. 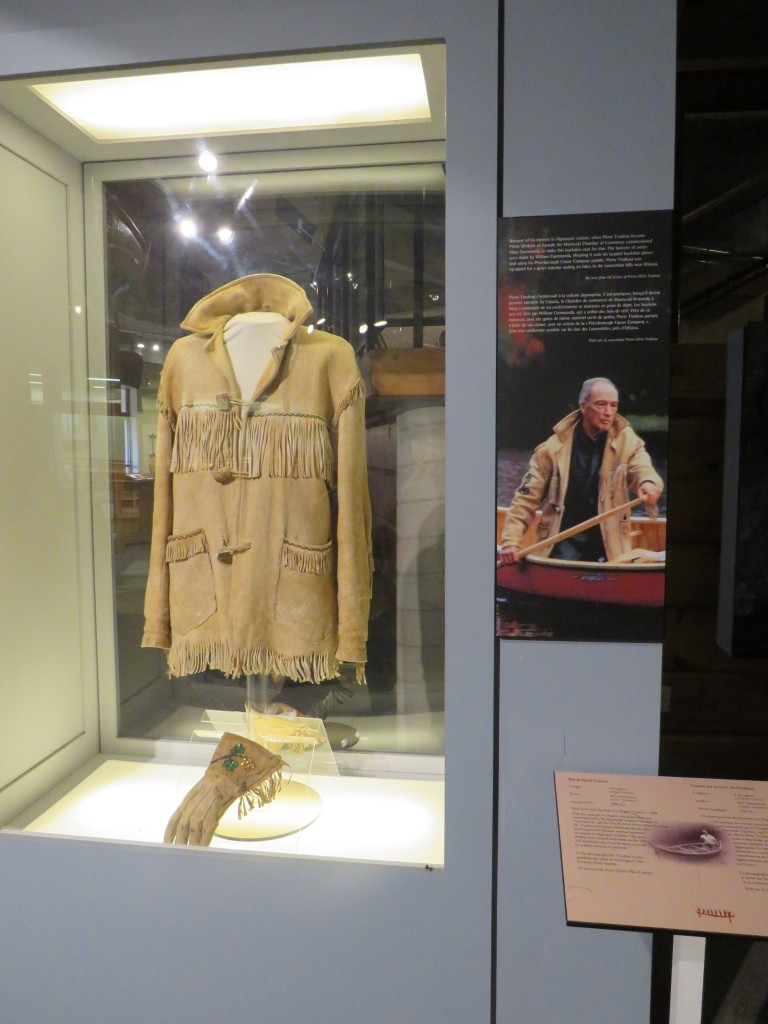 The museum is currently housed in an old manufacturing plant, but it is in the midst of $65 million fundraiser to build a new home by the Peterborough Lift Lock on the Trent Severn Waterway scheduled to open 2022.
I signed up for a Voyageur canoe tour and our guide, Jen Burnard (lead animator of the museum’s educational program) showed us on a map of the Great Lakes the routes these 36-foot-long canoes took during the fur trade years. 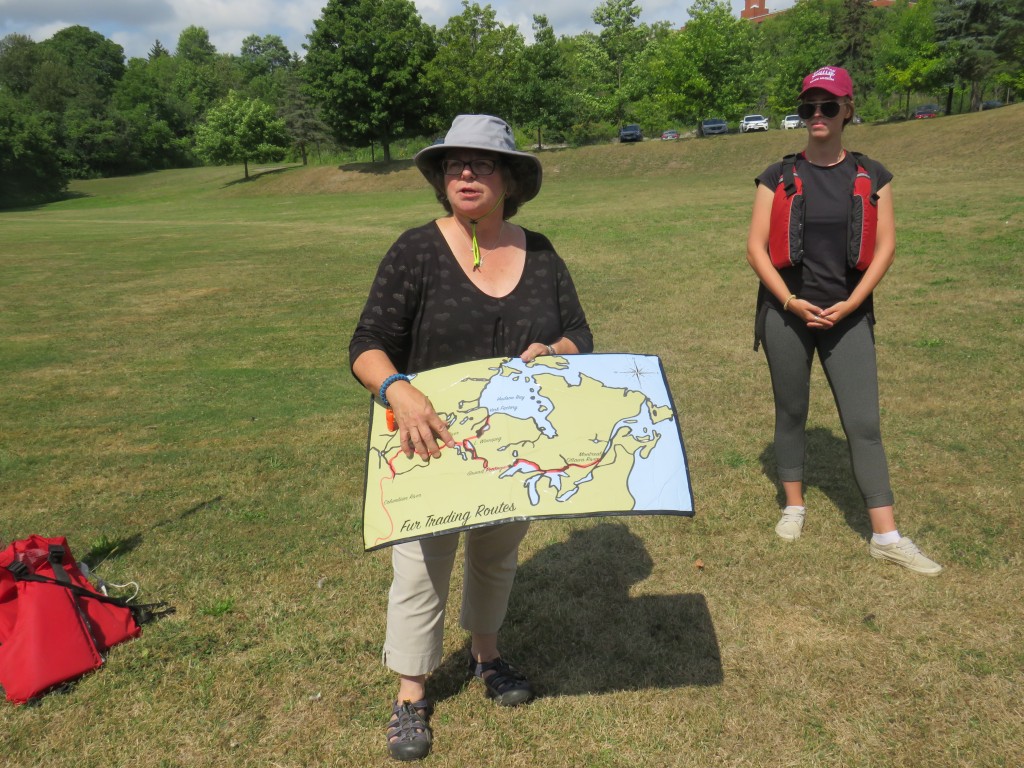 “They went as far as Fort William on Lake Superior, delivered trade goods and then returned to Montreal laden with furs,” Jen explained.
The canoe could take up to 16 adults with “window seats,” or a total of 22, but we were a much smaller group. More work paddling! Jen had us paddle at the hard-core pace (just for a few minutes) the voyageurs would have done and it was neat to feel far less drag on our paddles as we glided along the river. 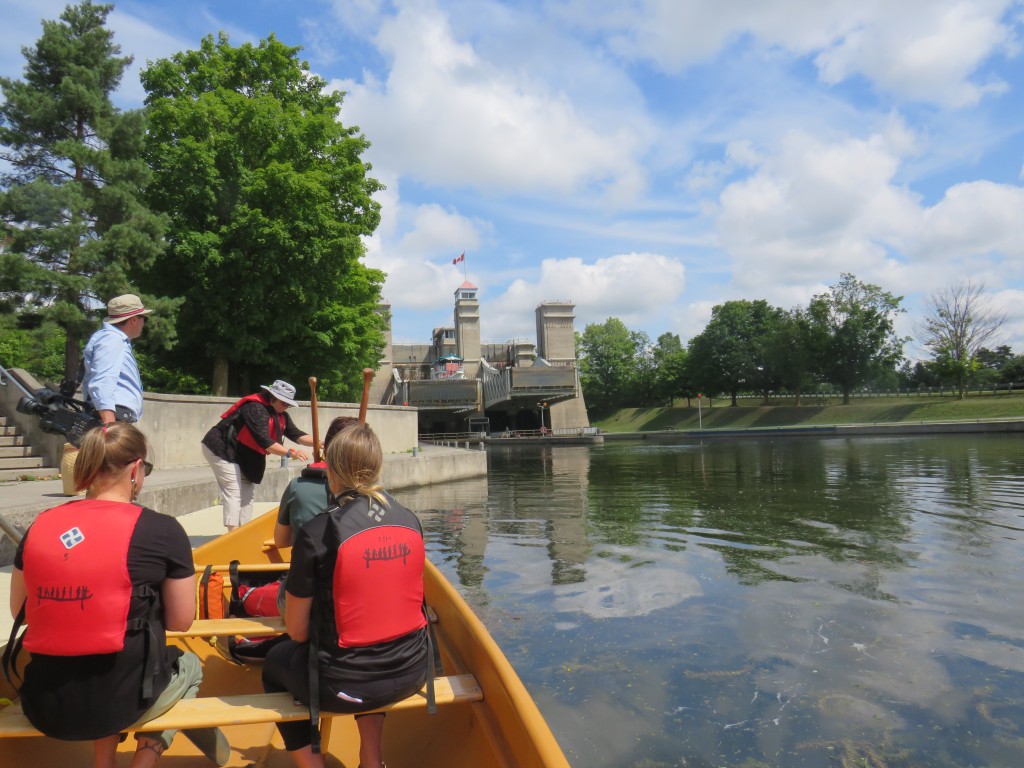 Up up and away! Entering the Peterborough Lift Lock, Ed Donald, the Lockmaster, told us it was built between 1896 and 1904, is 65 feet high and takes 90 seconds to get from top to bottom or vice versa. 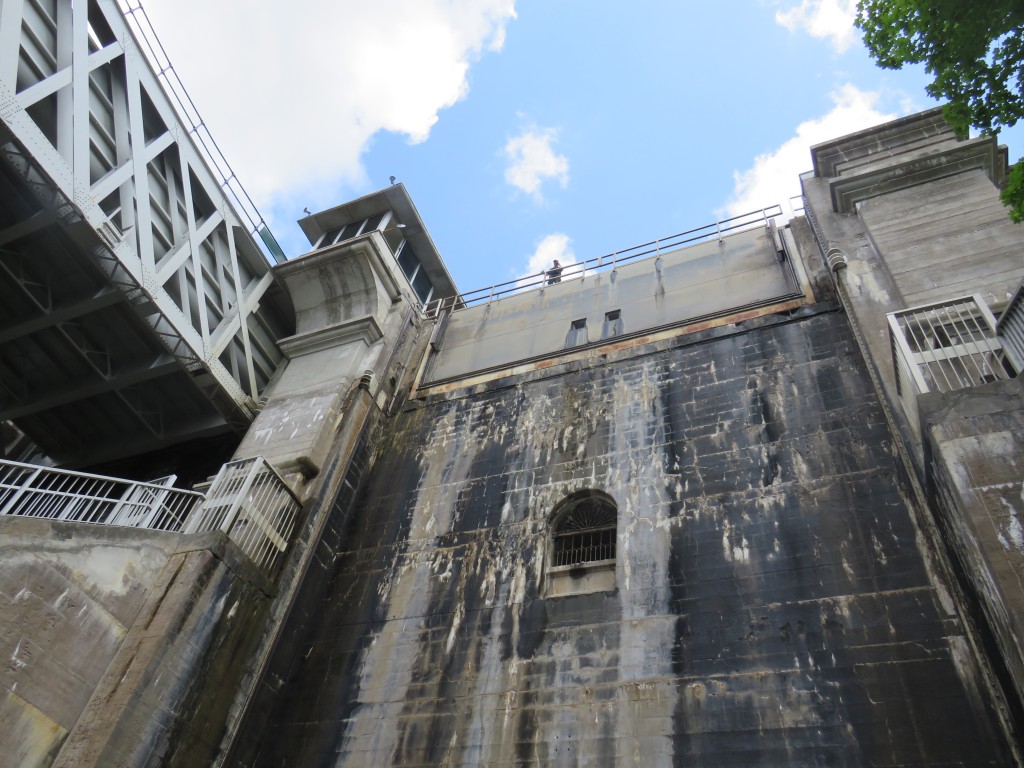 That tiny figure at the top is Ed.

Ed, who has done this job for 29 years, told us “this is the highest hydraulic lift in the world.” He sees around 5,000 boats go through a year and most are “transient,” many heading from Florida to Georgian Bay, or the other way around. The lock operates from May through to Thanksgiving. That’s when “We put the lady to bed,” said Ed. The tour took 90 minutes and cost $20.
Lunch was at Ashburnham Ale House. There are many craft breweries in the area due to the fact that the natural PH balance in the water makes for good beer. I had the warm, smoked maple salmon on a bed of salad greens. Delicious! 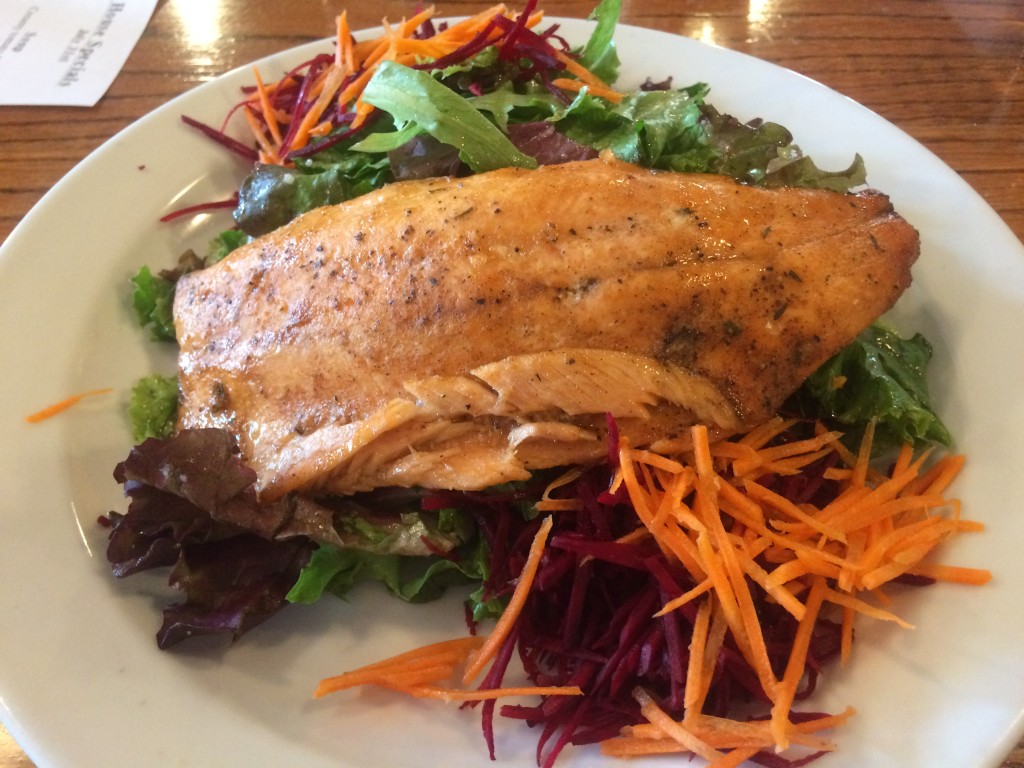 Black’s Distillery was opened four months ago. The gorgeous stills looked like something Captain Nemo would have aboard. 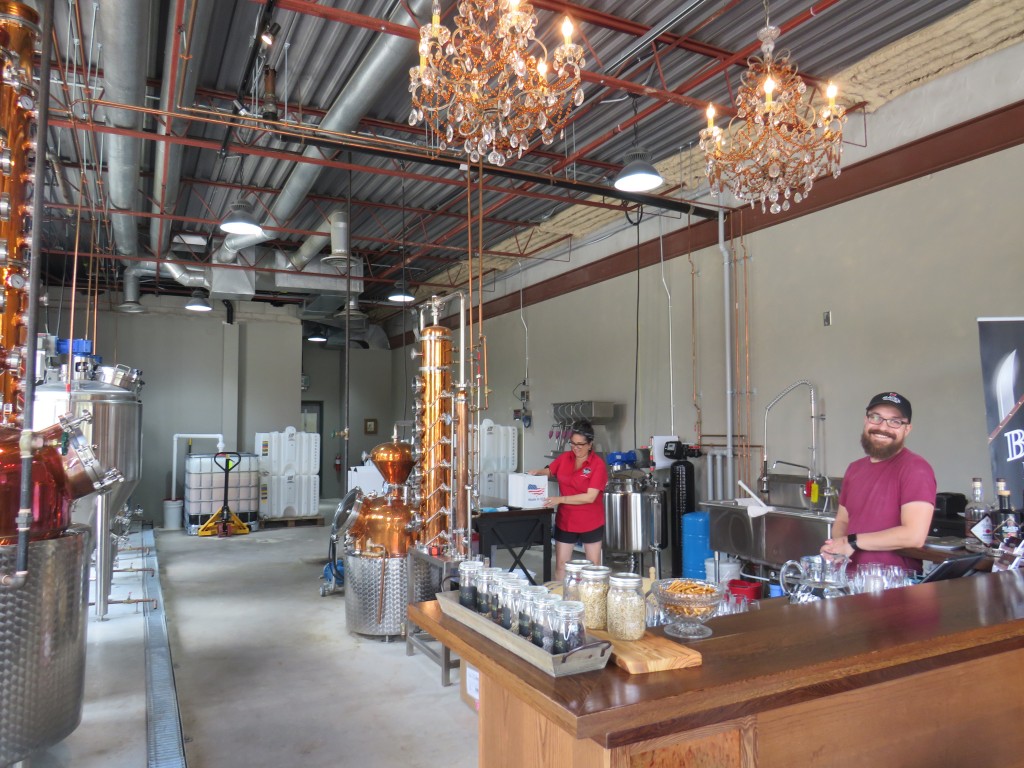 The whiskey, vodka and gin is organic. Red Fife wheat is used to make the vodka, which is 20 times distilled. Yikes! I had a wee taste and it was smooth and almost buttery…due to fat lipids, owner and master distiller Robert Black told me. Who knew? Another interesting fact? Gin is made from vodka with added herbs and other goodies. He uses a secret recipe of botanticals with lemon peel, juniper, lavender, sage, coriander, cardamom, cubeb and angelica. 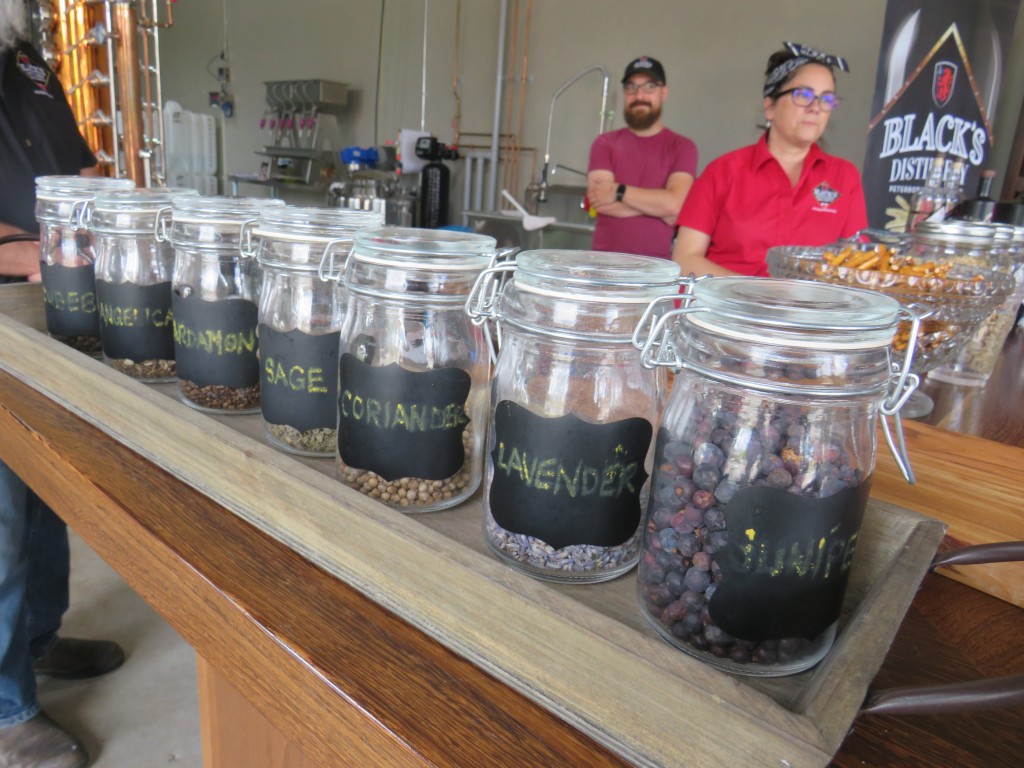 Currently, their products are available in 25 LCBO locations in the province. Robert let me try a tiny sip of the “cask proof” barley whisky (57%…strong, but still smooth when diluted with a bit of water).
Robert, who is a tool and die maker, trained with a master distiller in British Columbia three years ago and is now following his dream. “Ten years ago I visited Scotland and I loved the peaty flavours. I thoughts, this is a really cool job.” A scotch and gin man, he notes, “On a damp day whiskey warms you from the inside out. On a hot day gin refreshes you.” I did a taste comparison with a commercial whiskey (no names to be disclosed) and compared to Robert’s brew it tasted artificial and almost soapy. 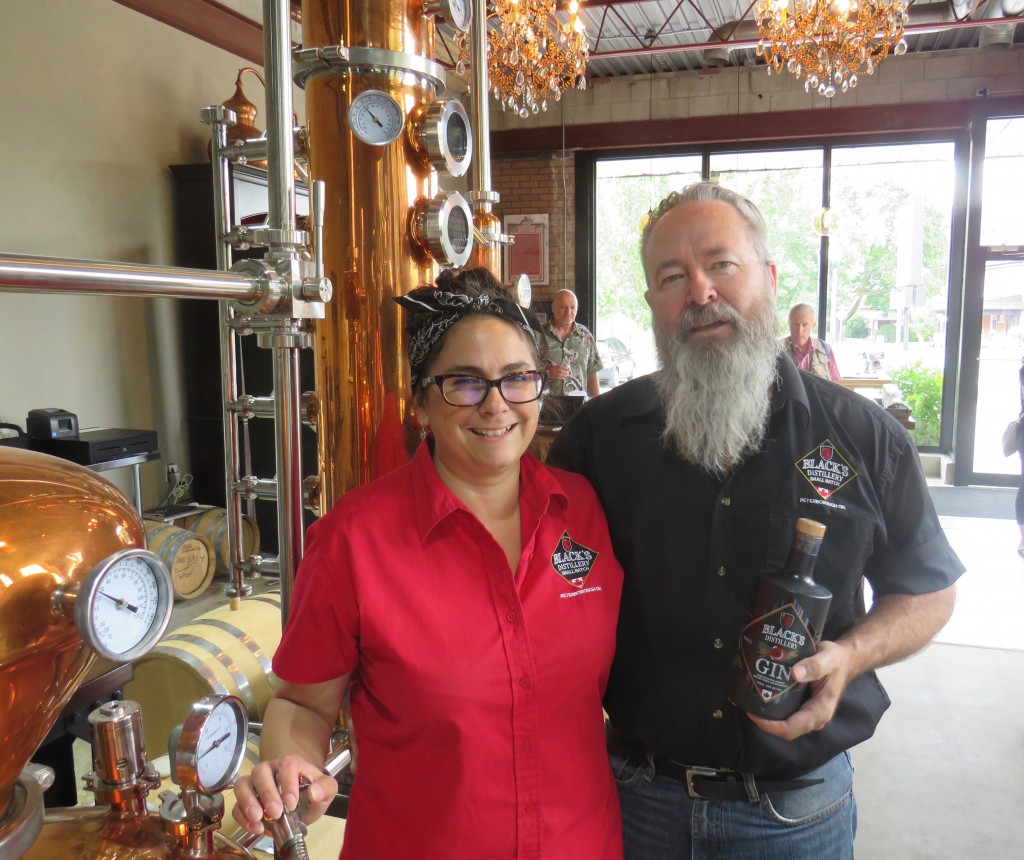 Robert and his life/business partner Barb Matchett living the dream.

Persian Empire Distillery produces more than 30 alcoholic products, including pomegranate liquor and a coconut rum with actual pieces of coconut floating at the bottom. 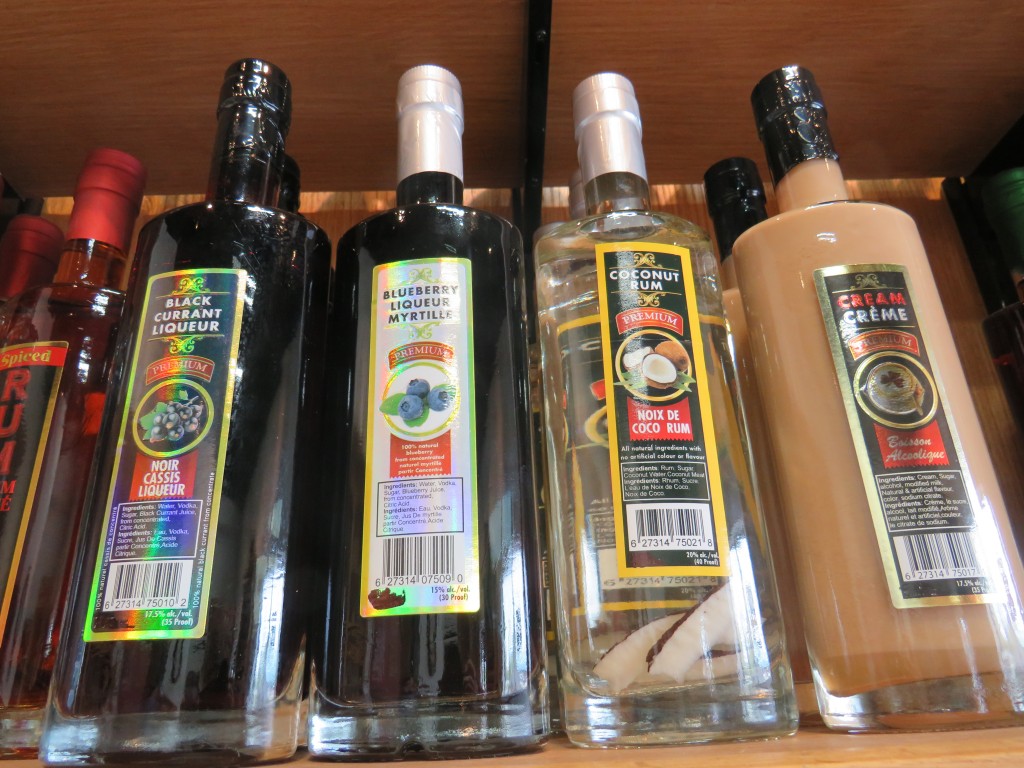 They also specialize in middle eastern favourites such as saggi (made with raisins), fini (made with cashews) and arak, (flavoured with aniseed). The distillery is owned by Bruce Khabbazi and his wife Sara, originally from Iran. They have been in the business for 20 years and currently have five products in LCBO outlets. 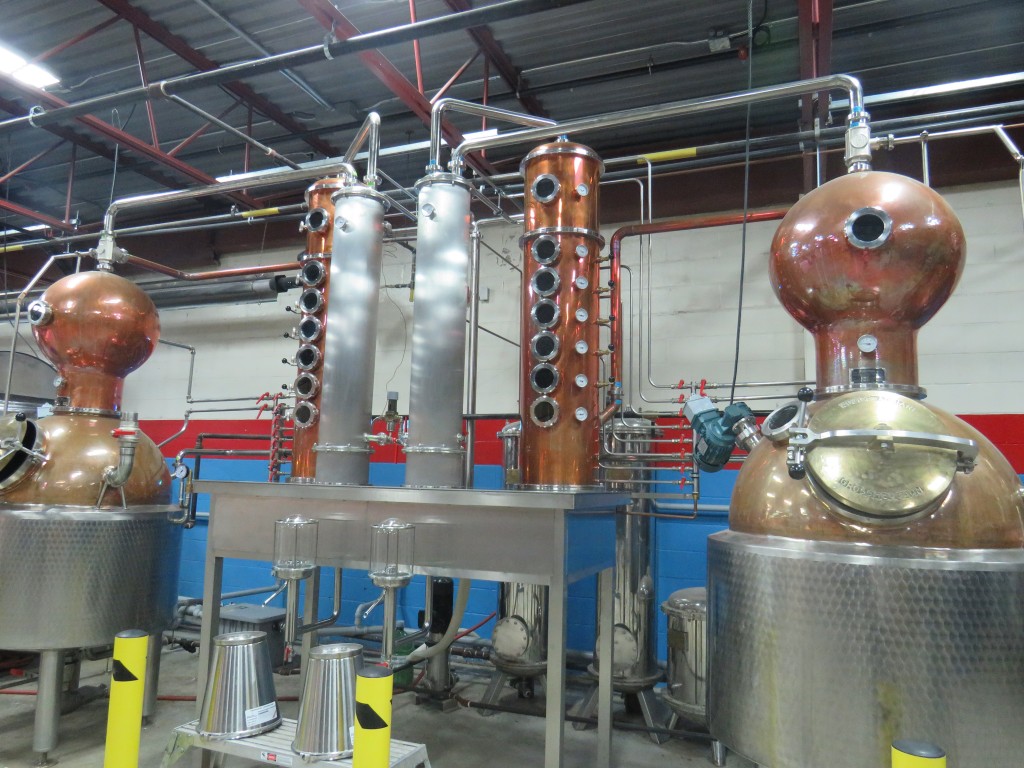 Interestingly, they also are the world’s biggest producer of yogurt soda, a middle eastern favourite that tastes a bit like butter milk. “We use milk from Kawartha Dairy. Our house brand is Mashky, plus we produce for many other companies. We make a plain, mint and cucumber version,” Lorne, our guide and a distillery employee told us. 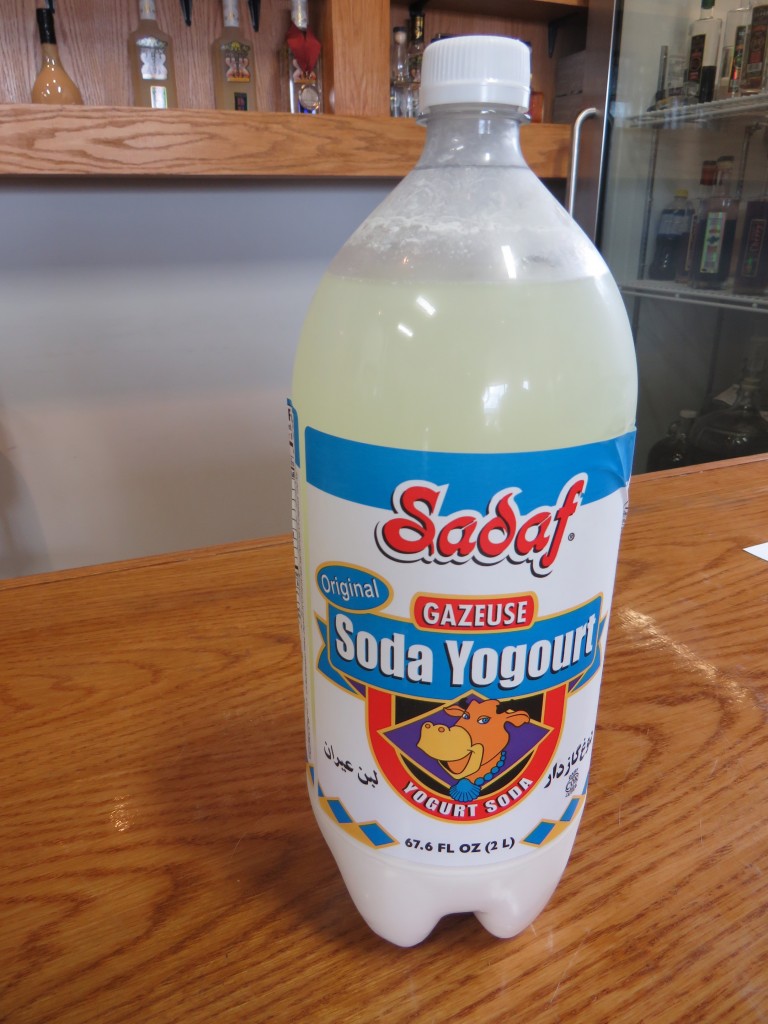 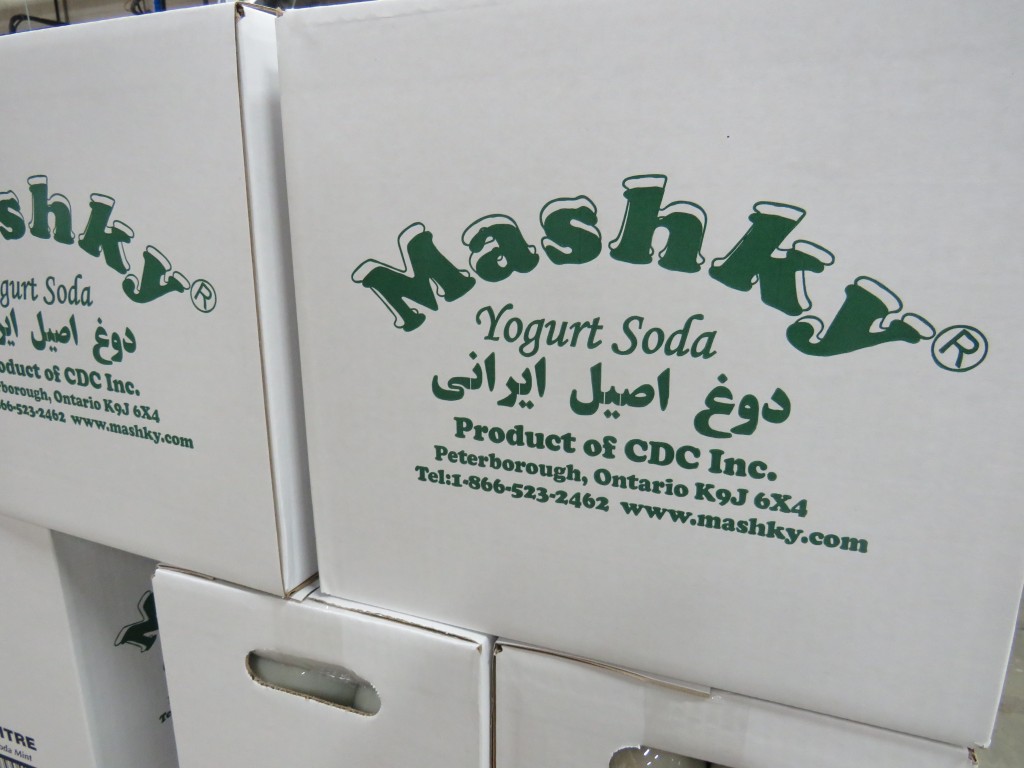 Canoes and booze…who knew Peterborough had so much to offer!
This entry was posted in Uncategorized. Bookmark the permalink.