Posted on October 30, 2018 | Comments Off on Eating my Way Through Toronto’s Historic East End

Recently, I signed up for a culinary tour of Riverside, Corktown and the Canary district of Toronto’s east end. 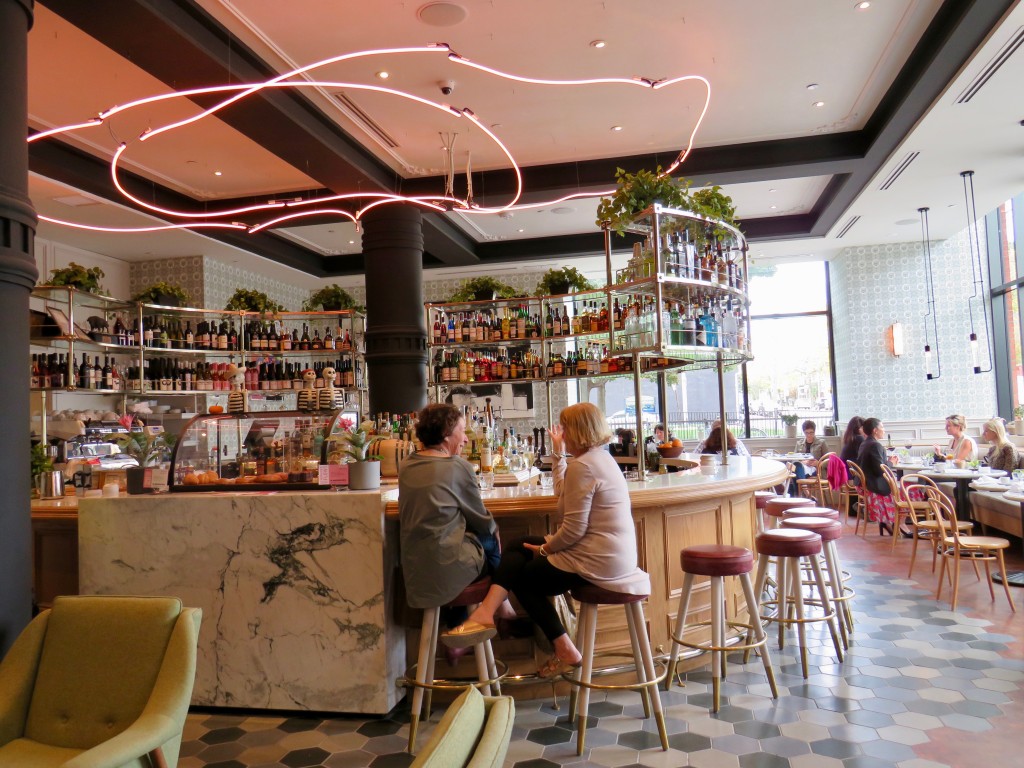 Culinary Adventure Co. “Big Cheese” (aka owner) Kevin Durkee and his colleague Leo Moncel, city manager, Toronto, met our group at the Broadview Hotel in Riverside (Broadview and Queen Street East) where we took a gander at the rooftop bar, 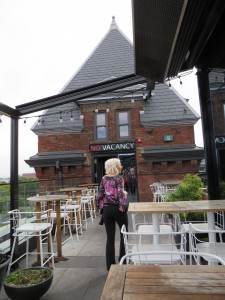 then headed down to the cafe for a delicious plate of hot smoked salmon and cucumber salad with Easter egg heirloom radishes. 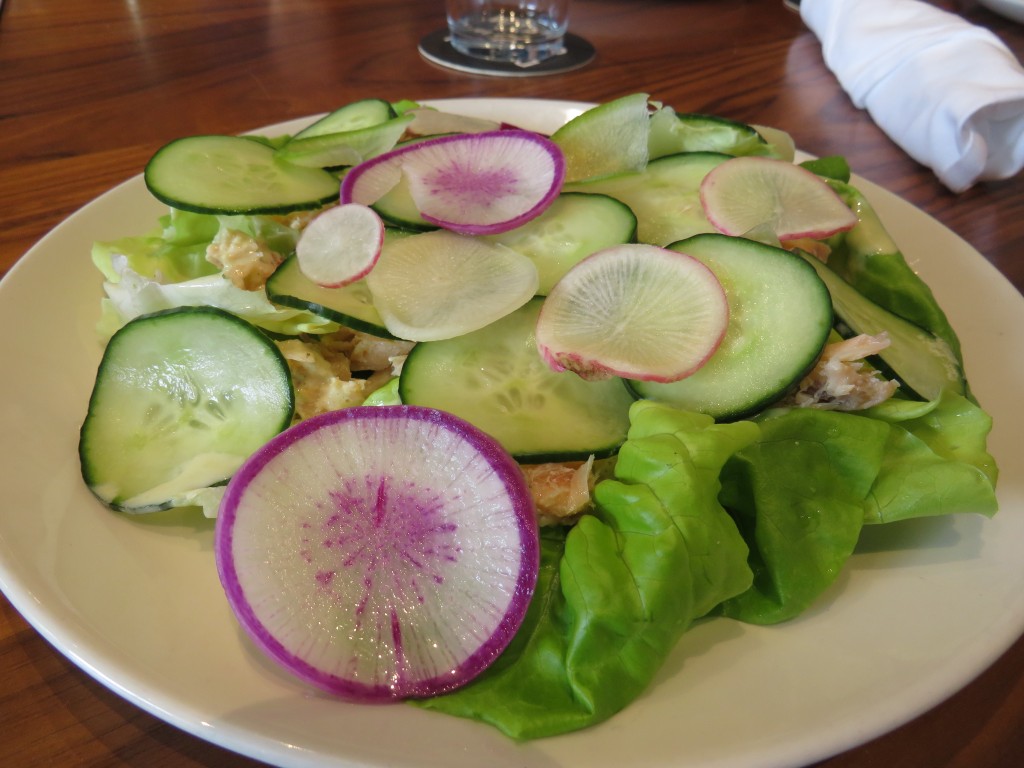 The salmon was flaked and the warmth went beautifuly with the cool, crisp cucumbers and radishes. Leo gave us the background on the hotel, and the area.
Back in the day, the east side of Toronto was populated by the working class because the winds here tend to be easterly and the gentry, who lived on the west side of the city, didn’t want to get a whiff of stockyards, tanneries and sundry industries. The Broadview was originally built by Dingman, a soap tycoon, for travelling salesmen. 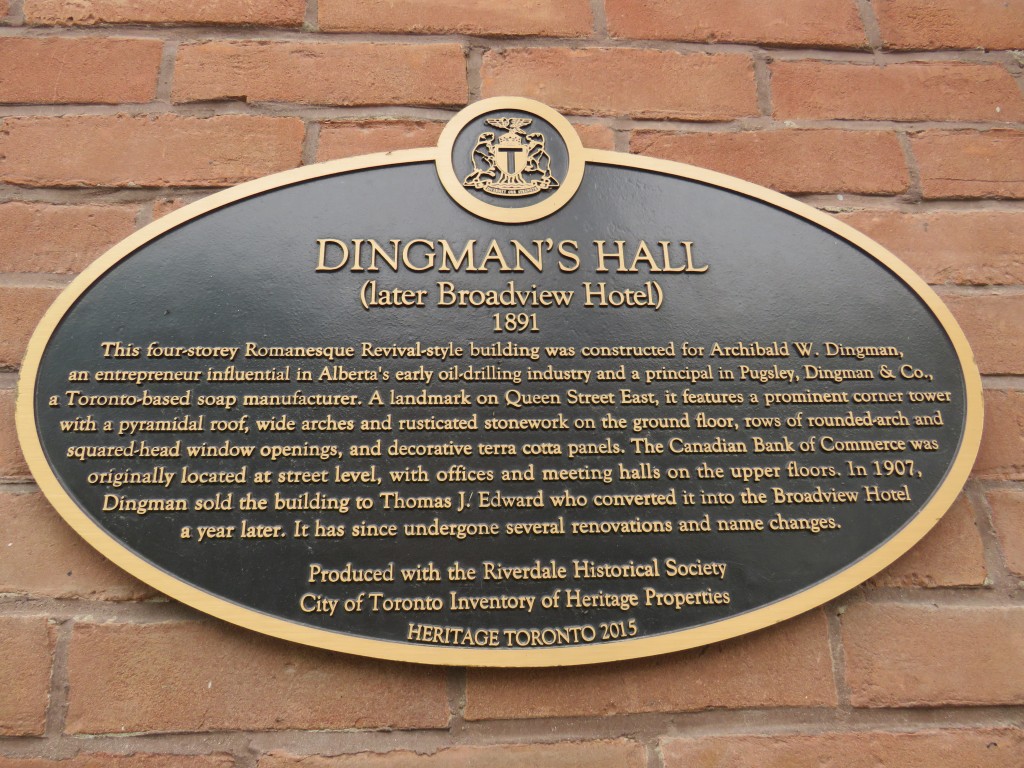 The Broadview I remember was inhabited for 40 years by Jilly’s a notorious strip club.
As we walked, Kevin told me that Culinary Adventure Co. offers tours in Ottawa, Toronto and Winnipeg year round and from June until end of September in Charlottetown, Kingston and Halifax.
“Sixty-five per cent of our business is local, celebrating the city or using gift certificates,” he noted. In Toronto’s east end their tours are usually either Riverside/Leslieville, or Corktown/Canary district tours but today, special for our little group they merged Riverside into the Corktown/Canary district tour. Kevin used to own a restaurant called Cheeseworks,at Bathurst and Niagara Street. The Culinary Adventure Co. was started by a couple who separated in 2013 and Kevin, tired of the restuurant business, bought it in 2014. “Good tastes better when you know where it comes from,” he explained.
On this tour they were covering…
1. History/background of establishment and area
2. Stories of team in kitchen.
3. Diversity – TO most diverse city on the planet.
“It’s a casual learning experience and great way to rediscover the city,” he noted. Why are we so obsessed with food today? “Because of the Food Network, Anthony Bourdain, and Instagram. There’s a real appreciation for taste of place.” The tours usually have a maximum of 12 people and cost around $80 per person.
Walking west on Queen Street from the Broadview Hotel, we went past the storefront that was the original Canadian Tire, then off to Merchants of Green Coffee. 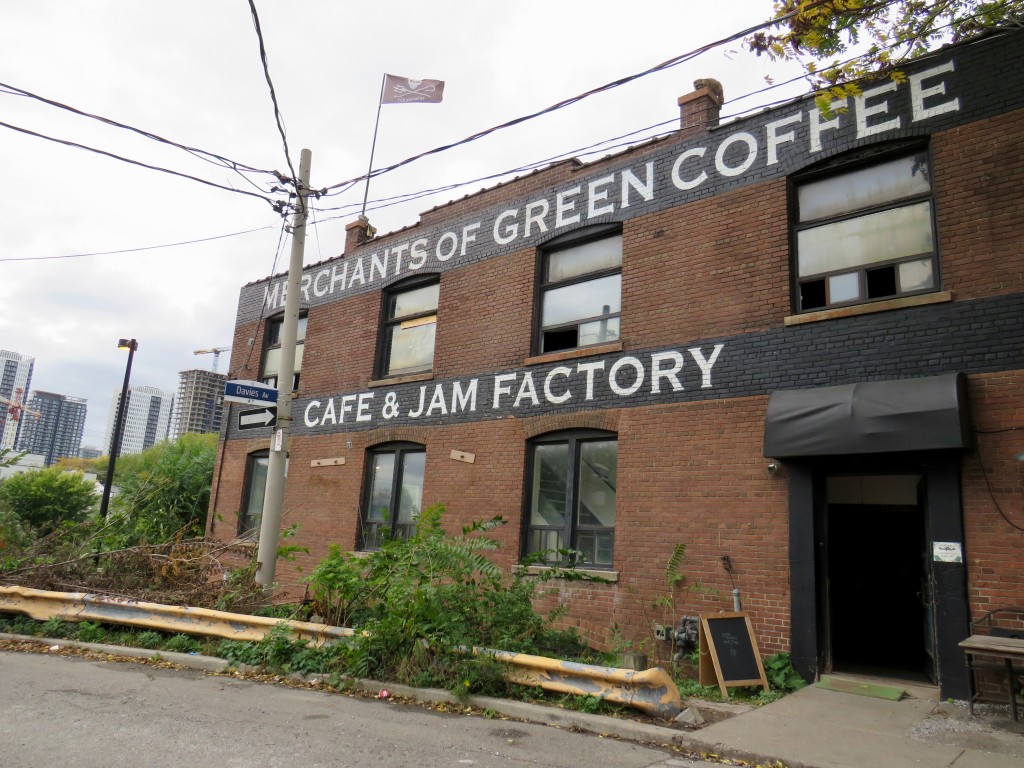 Standing out front of the two-story brick building overlooking the Don Valley Parkway, Leo held up a picture of Shirriff marmalade. “Remember this?” I did. Mom bought the stuff when I was a kid. “The Shirriff factory owner was from Scotland. He brought the marmalade recipe back and in 1909 built his plant here. The second floor is the Jam Factory event space,” explained Leo.
Inside, Megan Thibeault part-owner and marketer, gave us the scoop on importing green beans that were certified Free Trade and organic. 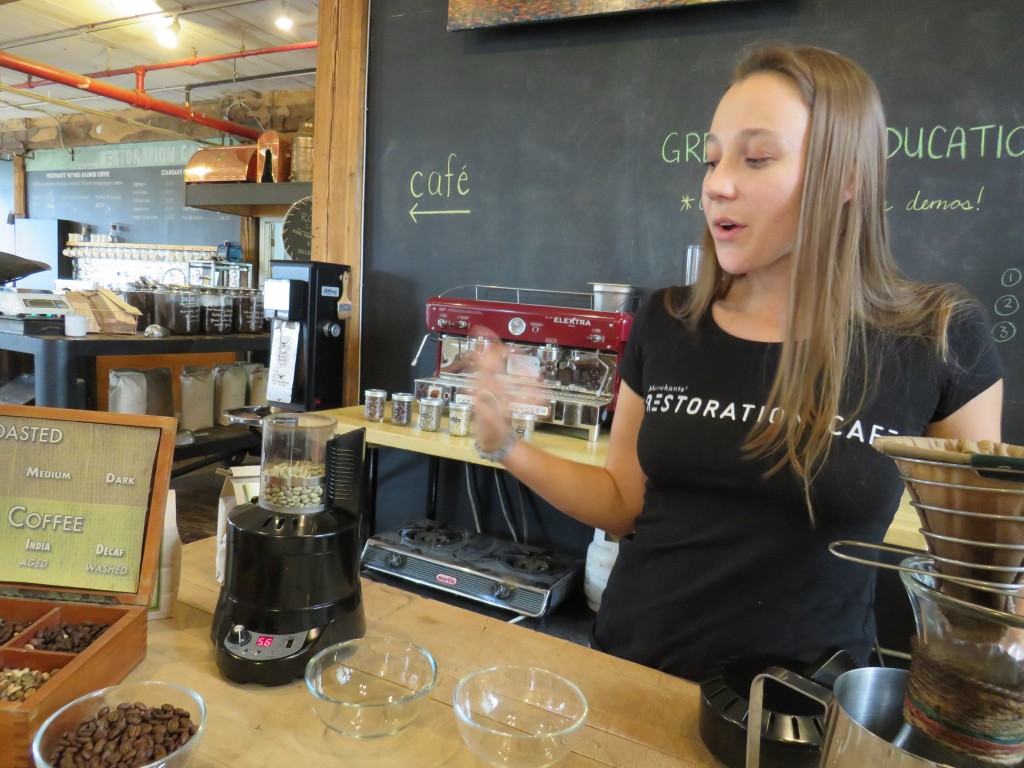 “We buy from a collective in Honduras. We helped them get financing from the International Development Bank. Now the collective members have a sustainable livelihood, plus this kind of crop helps to save the rain forest.” She told us the company’s two founders, Derek Zavislake and his brother Brad, are environmentalists with three bottom lines – profits, people & the environment. For our coffee tasting, the first step was to roast the beans in a mini roaster, similar to a hot air popcorn maker. “Once roasted it lasts seven days before becoming bitter. You want it lively and sweet and still containing antioxidants. It’s hard to find fresh roasted beans,” she explained. We watched the beans turn from green to brown, going through “1st crack” when it starts to roast and the the chaf comes off, and “2nd crack” the sugar inside the beans gives it a sweet taste and it becomes caramelized. 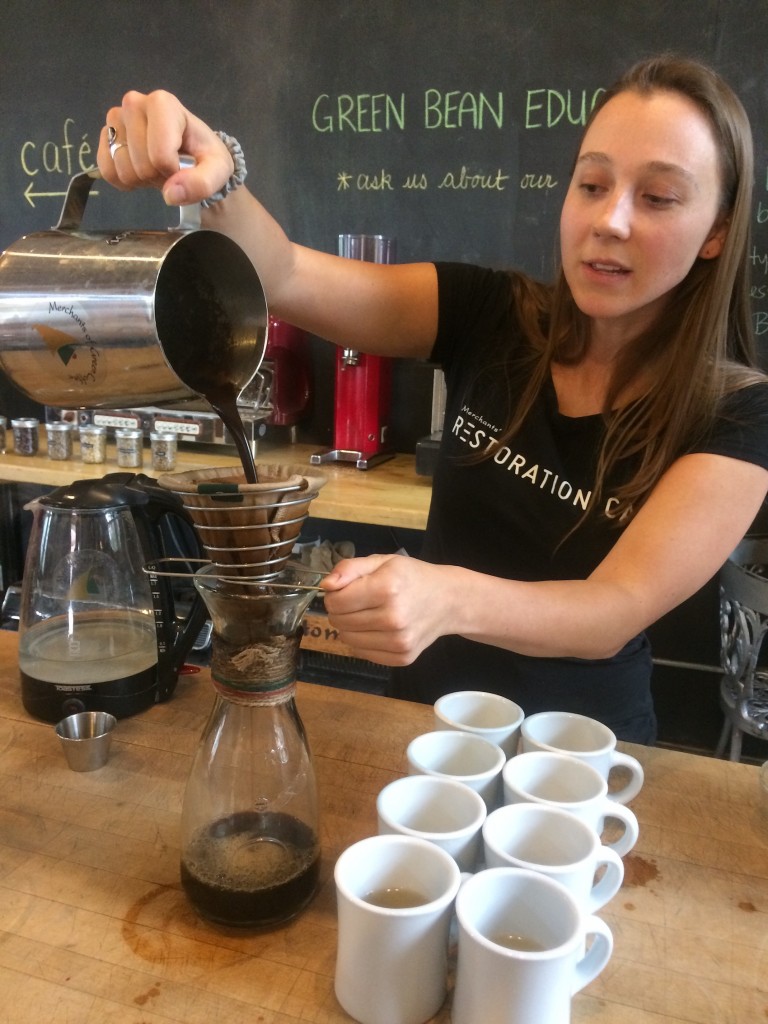 Then it steeped and was filtered through an organic cotton hemp filter. I had a small sip, without milk, and found the flavour to be intense, with a spike of sharpness mellowing out with a soft sweetness in the finish. Who knew? If you can’t make it to the Riverside location, the beans are available at Rowe Farms.
Crossing over the Don River into Corktown, we came to the Dominion Pub and Kitchen, a gastro pub located at 500 Queen St. E. 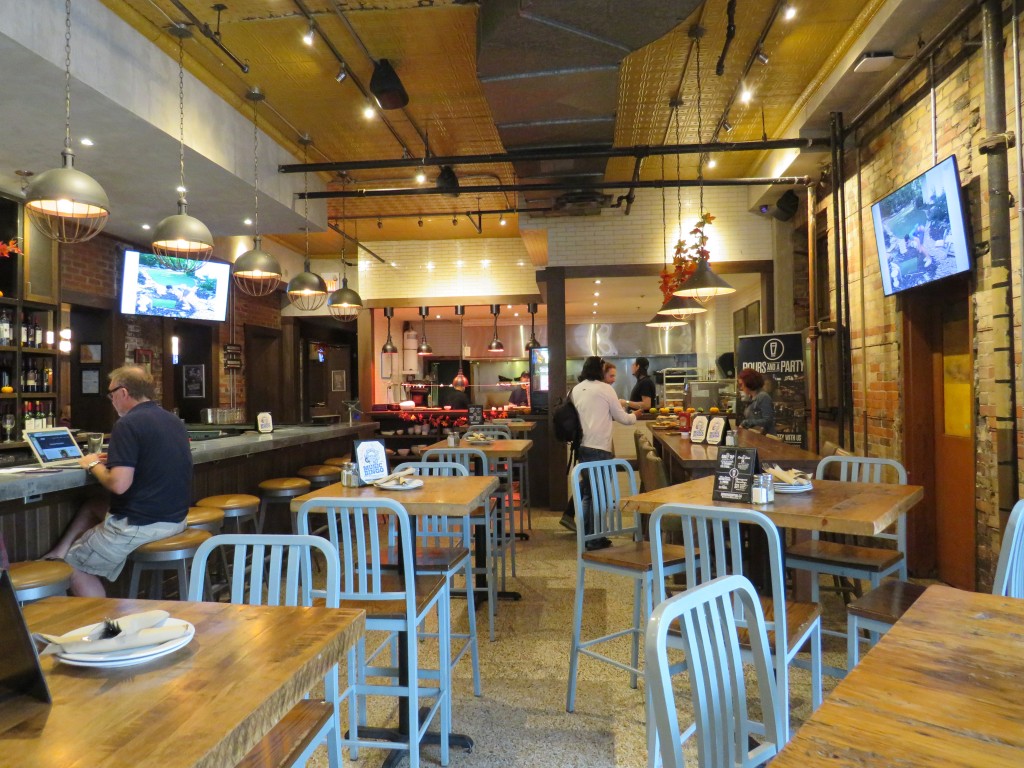 Leo had gone ahead and was ready with some hearty comfort food including a tater tot, pulled pork poutine, a huge, freshly baked pretzel with grainy mustard and a flight of Henderson’s Best, a microbrew named after the 1st brewery in Toronto, plus Brickworks 1904 cider. “1904 was the year of Toronto’s second great fire, and much of downtown was destroyed,” said Leo. Delicate and apple-y, there was nothing hot or fiery about it. 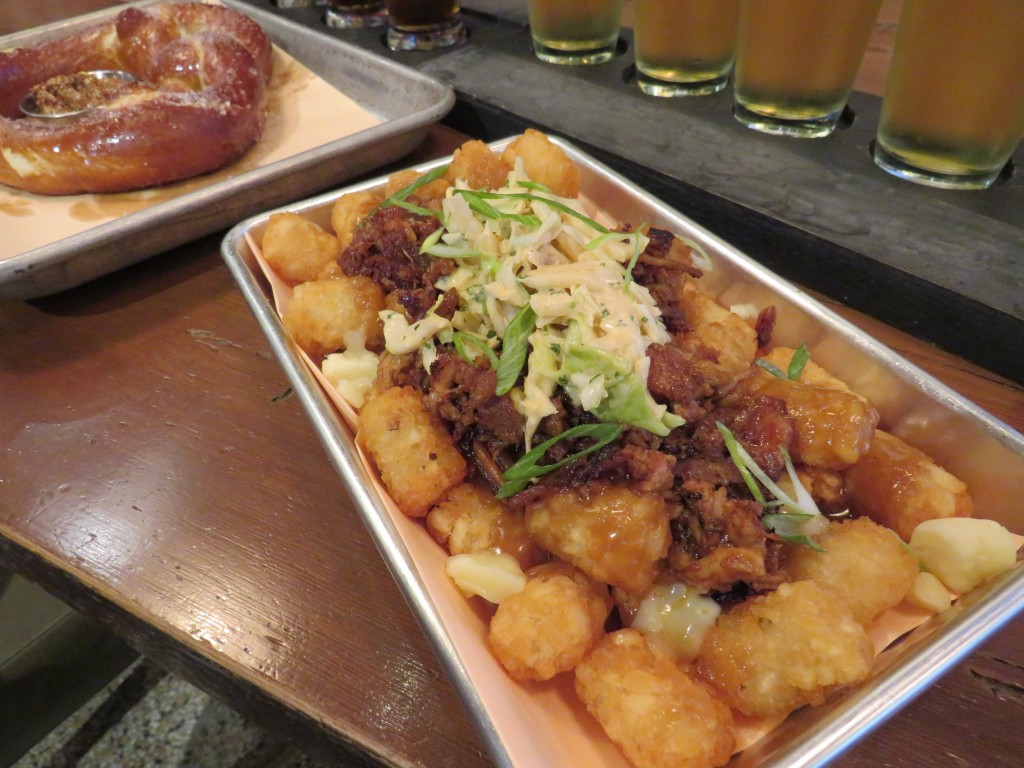 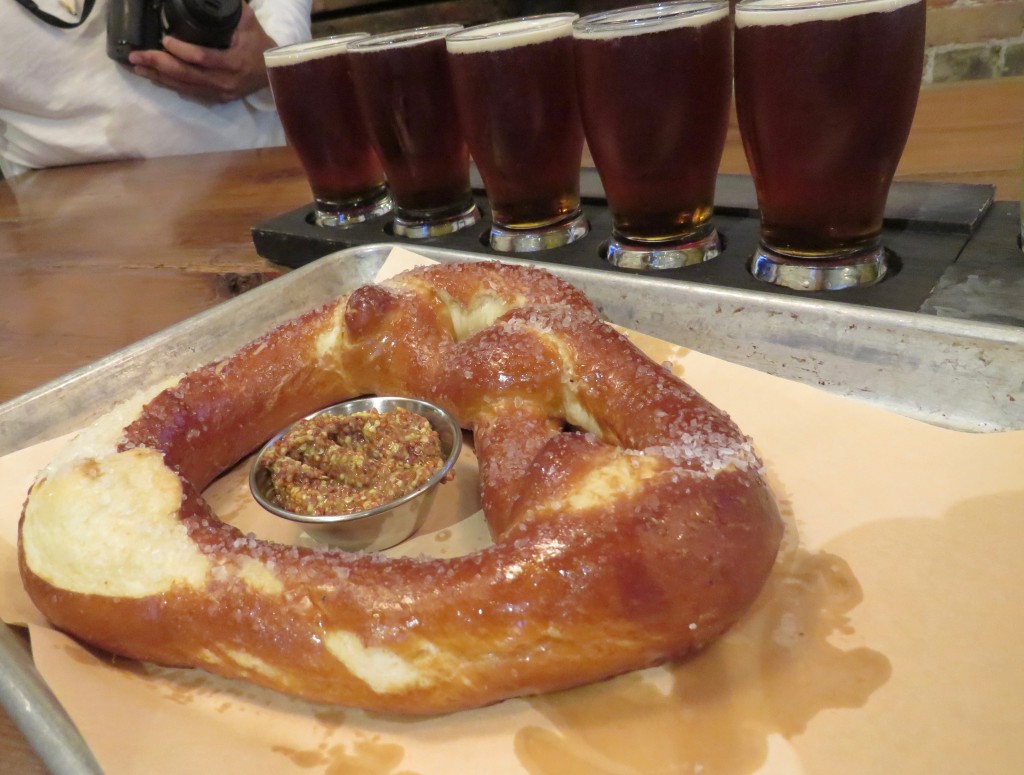 It was time to take in a little street art in the Canary District at Underpass Park. 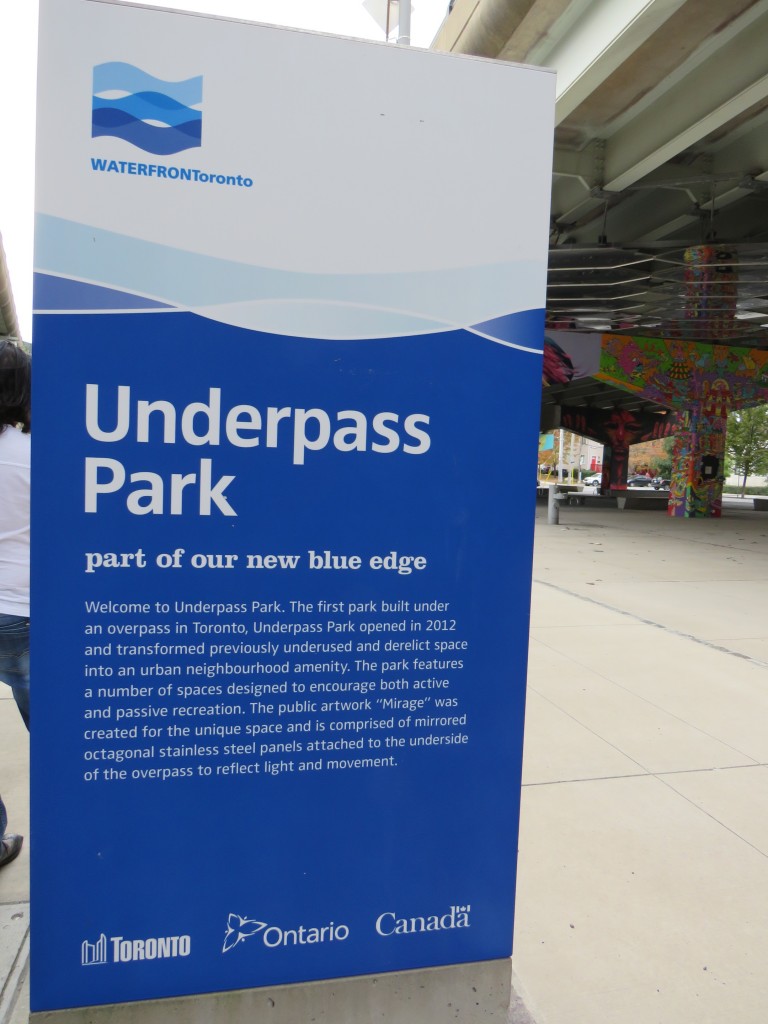 Tucked below Corktown at River Street and Eastern Ave., the underbelly of this section of the Gardiner Expressway is covered in colourful graffiti art, complete with mirrored ceiling. 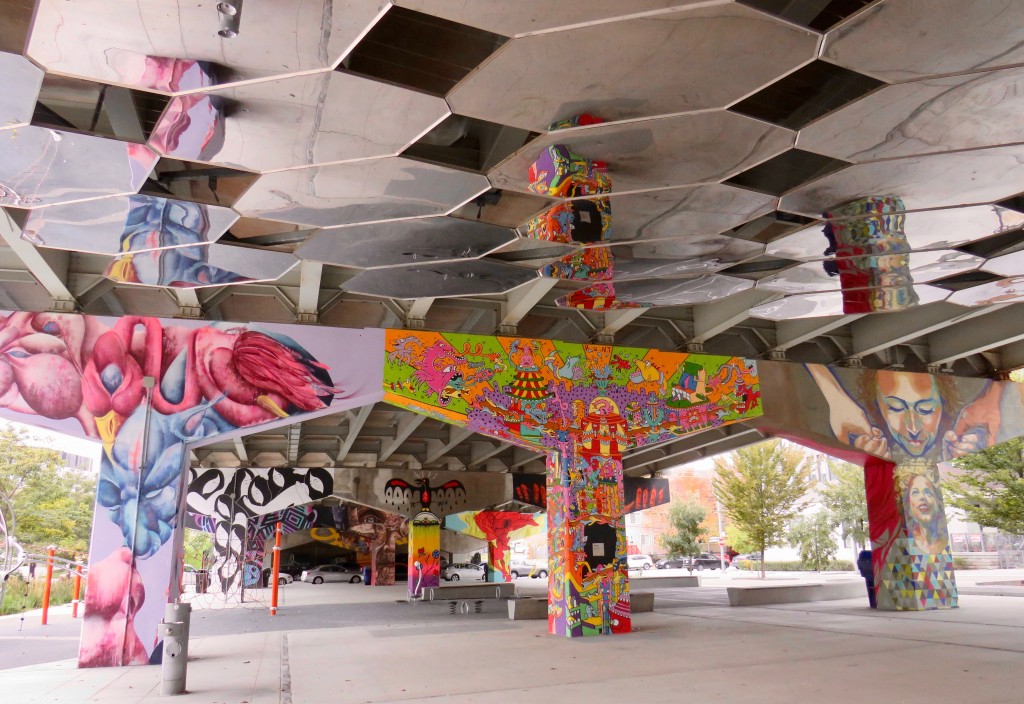 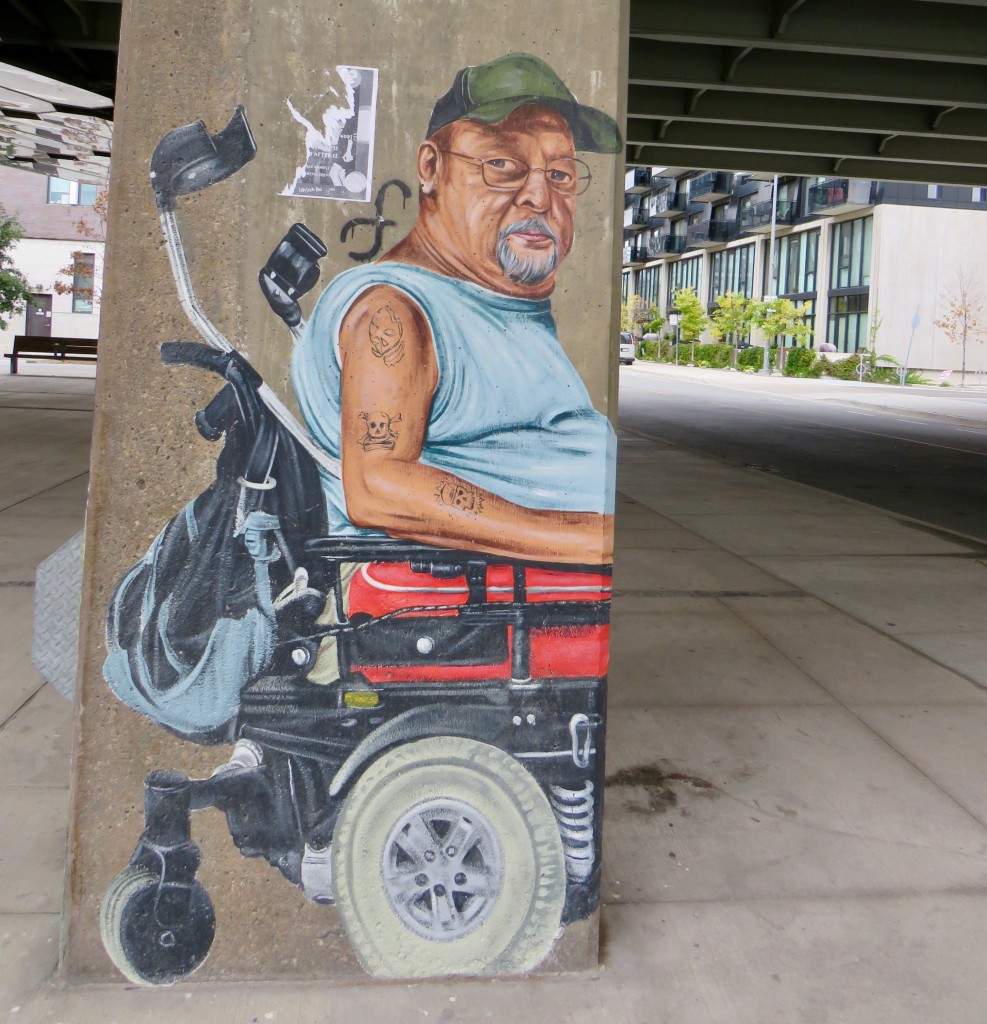 “In the Canary District, a former industrial site, it took 10 years to clean the soil before they could build the Athletes Village during the Common Wealth games. This area was once home to one William Davies pork producers, one of the biggest abattoirs in the world at the time,” Leo told us.
What better time to taste some vegetarian delights? 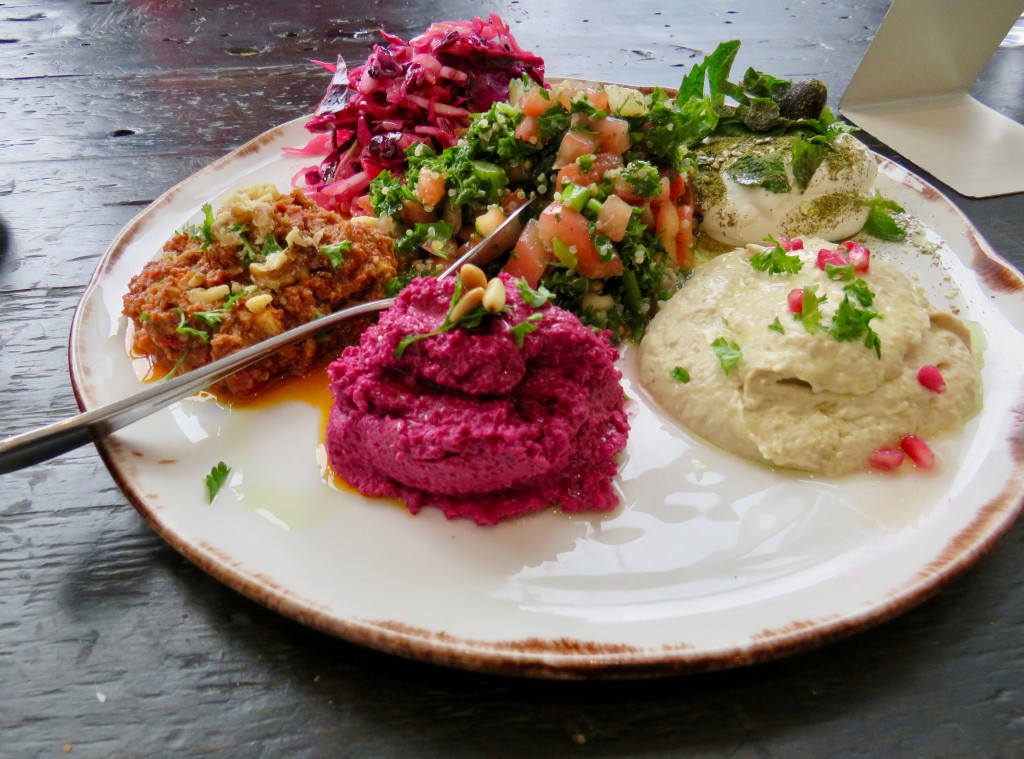 At Souk Tabule Middle Eastern Restaurant we munched on chef’s platter with labni (creamy garlic yogurt cheese), beet mutable (with tahini and lemon), muhamara (roasted red pepper and walnuts), babaganouj (eggplant and tahini), quinoi tabule and Arabic slaw. According to BlogTO, this chain (there are four) has the best falafels in city and I’d have to agree. 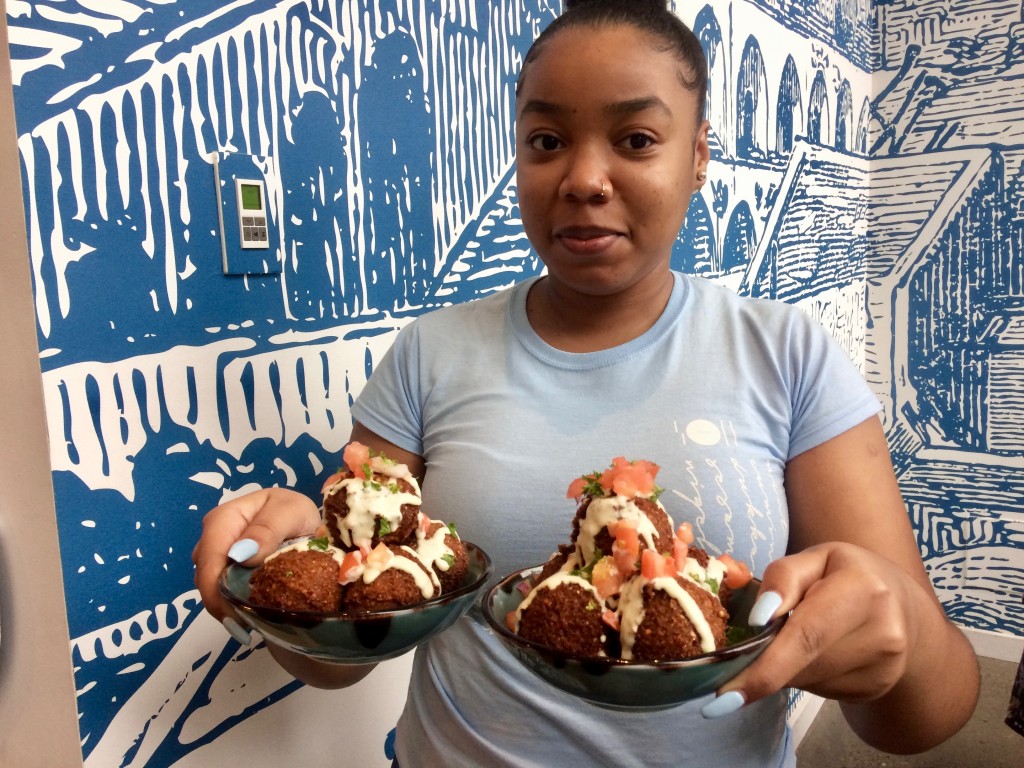 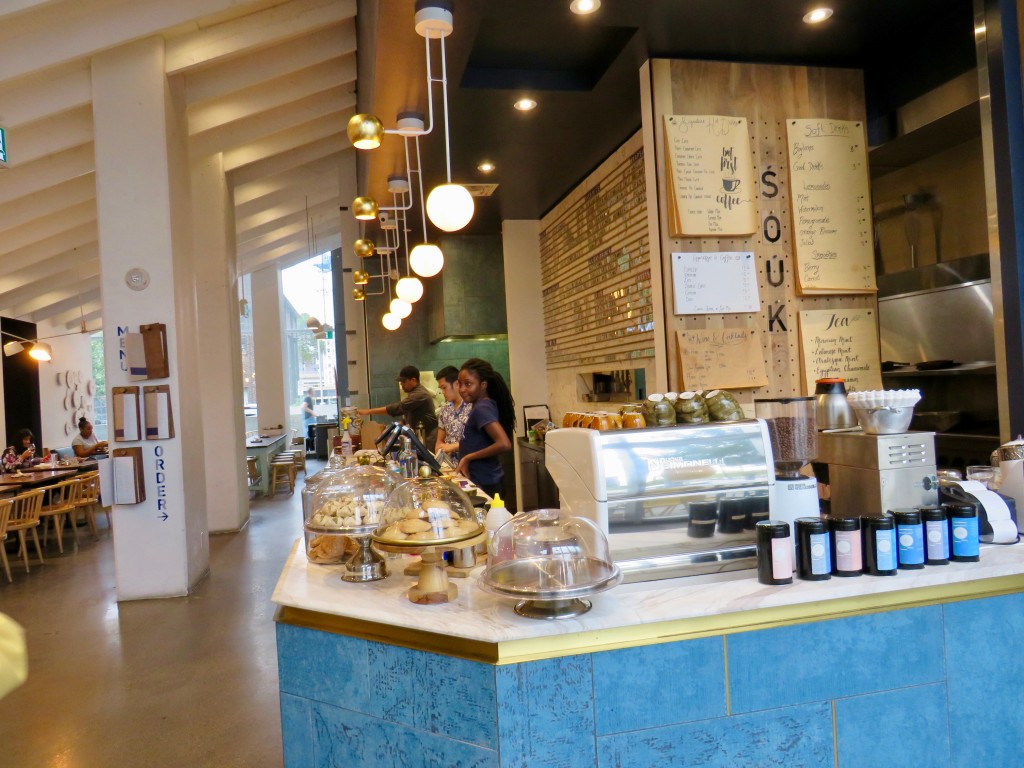 Another dish that was over the top was arnabeet, 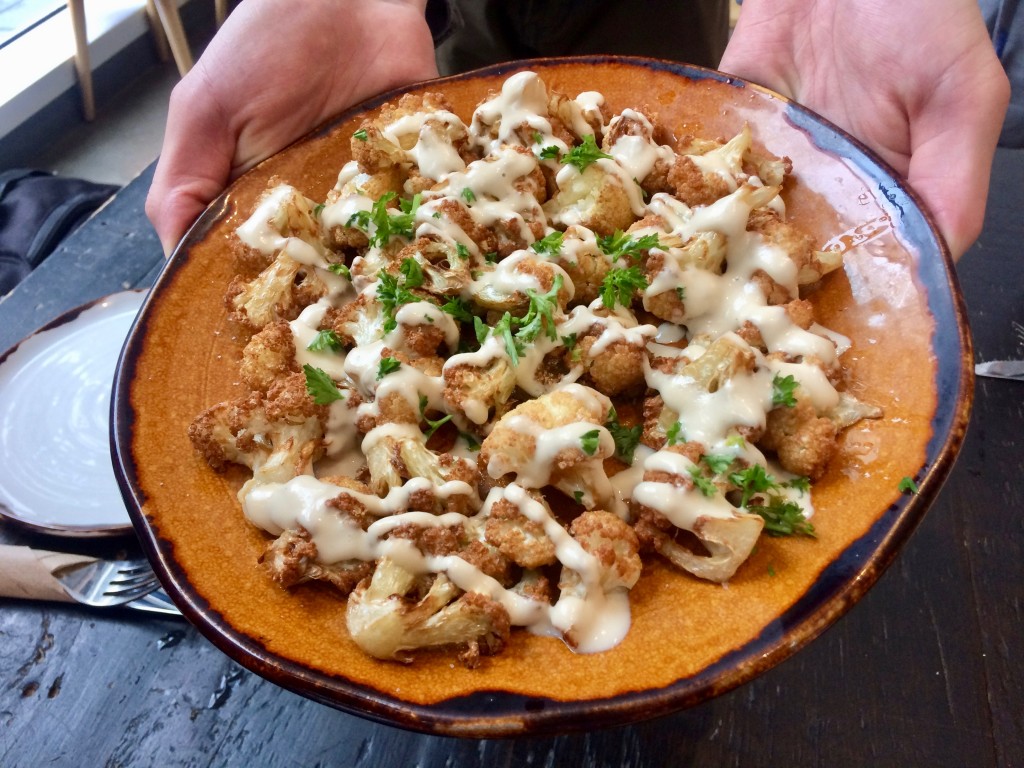 flash-fried cauliflower, drizzled with tahini. “The owner, chef Rony Goraichy is from Beirut. He came to the city as a student and worked at The Jerusalem restaurant. He became an actuary and got married to the boss, Diana Sideris,” Leo explained. In 2005, Goraichy traded his suit for chef’s whites and he and his wife opened the first location at Yonge Street and Eglinton Ave. The other two are in Riverside and Bayview Village Shopping Centre.
Our final stop was Roselle Desserts, a bakery at King and Parliament in Corktown. 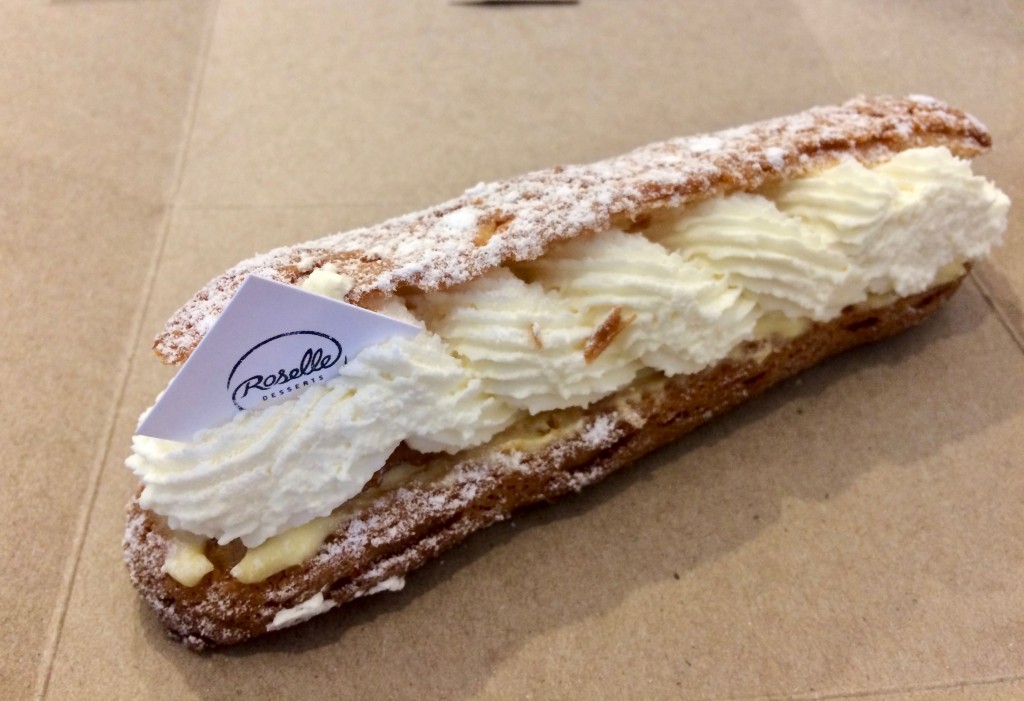 “The owners, Bruce Lee and Stephanie Duong, got married a month ago,” Leo told us with a big grin. We tasted what the bakery is best known for, a Banana Fosters Éclair. OMG. Thought I had died and gone to heaven.
Loved this culinary adventure…and my waistline was glad there was so much walking involved.

This entry was posted in Destinations and tagged Food, Toronto. Bookmark the permalink.