Dishing the Delish in Music City

Posted on November 3, 2018 | Comments Off on Dishing the Delish in Music City 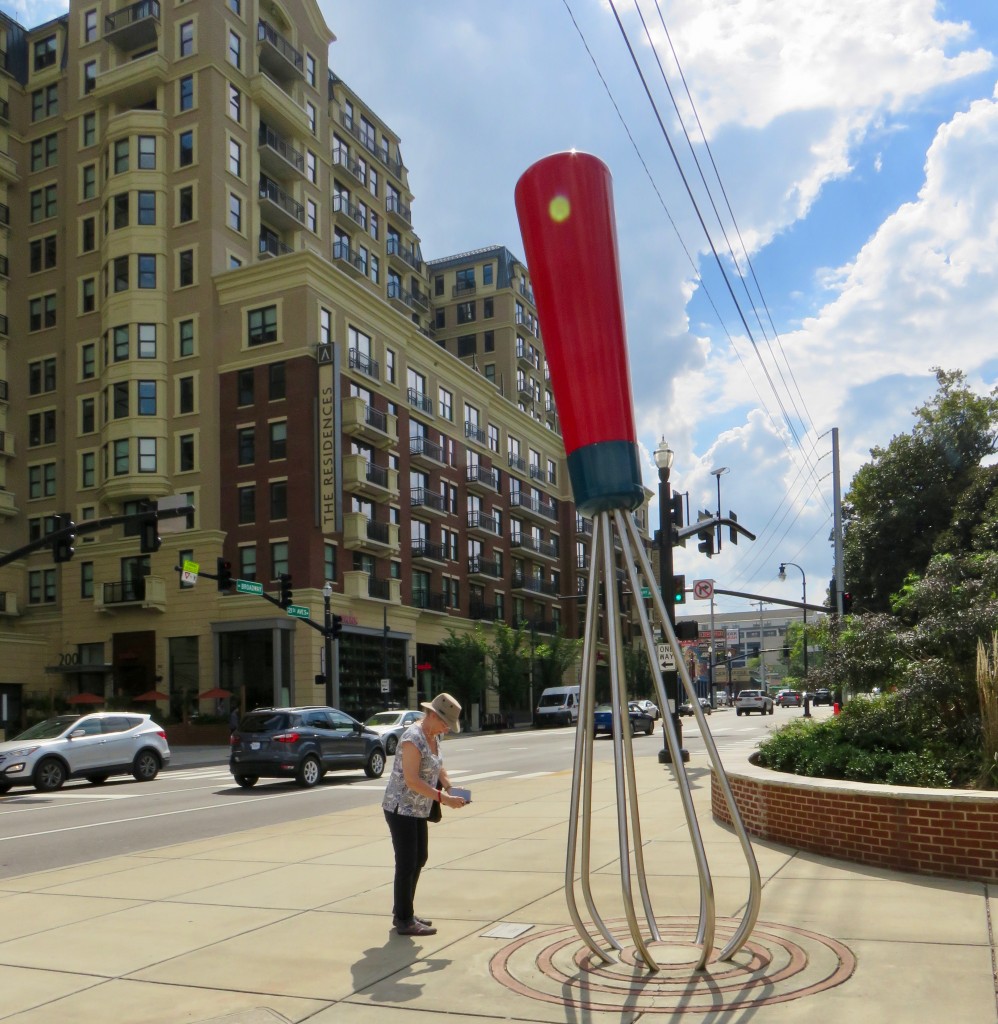 I did lots more than eat while I was in Nashville recently and you can read about my music, civil rights, history and art explorations in other posts. But, this one is all about eating.
What better way to start a foodie tour of Nashville than at Christie Cookie Co.? I stepped into the aromatic shop on trendy 12th Ave. South and my taste buds started to tingle. 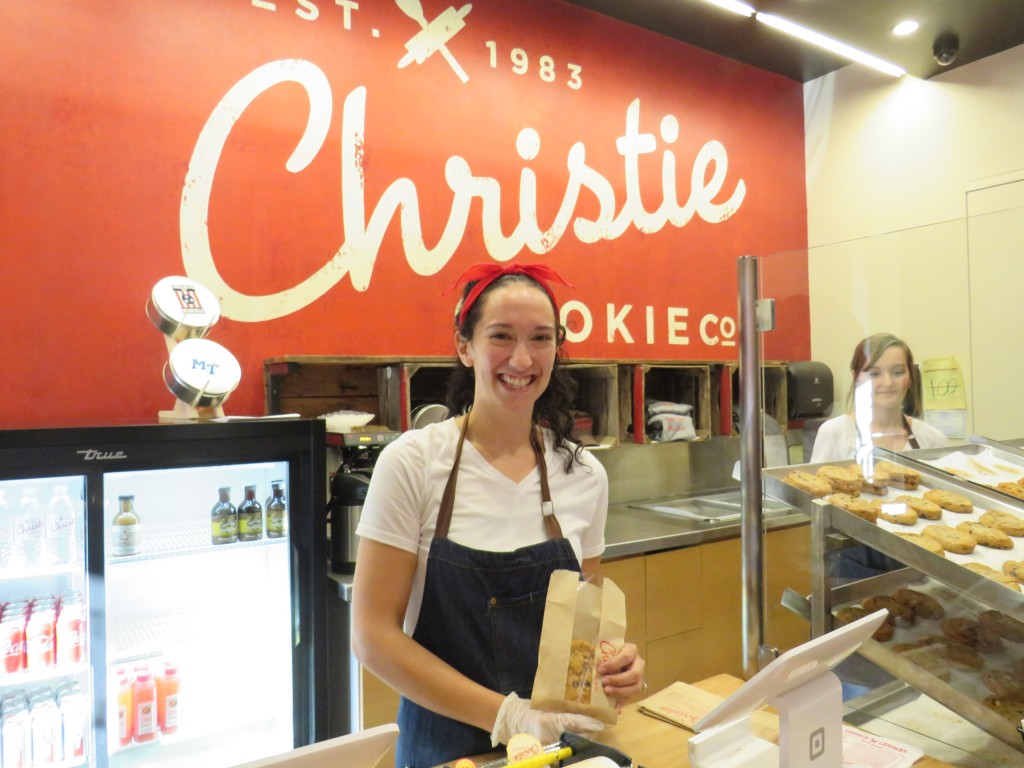 The back story is that owner Christie Hauck used to bake cookies for his college friends when he attended Vanderbilt University. They were so popular he went into the cookie business after he graduated in 1983. Starting out as a mail-order operation, he made his oatmeal raisin cookies first, then branched into lots of other flavours including chocolate chip with toffee, and peanut butter chocolate chip with toffee. Yum! His secret? No GMO or preservatives, real butter, chocolate from sustainably farmed cocoa beans and fresh ingredients. You can get them online or at Kroger grocery stores. American Airlines and United Air serve them to first class customers. Double Tree hotels give warm Christie’s chocolate chip cookies to guests when they check in. Store manager Chrissie tells us, “The plant in in Germantown, six miles from here. They make 100 million cookies annually. At Christmas the plant looks like Santa’s workshop.” 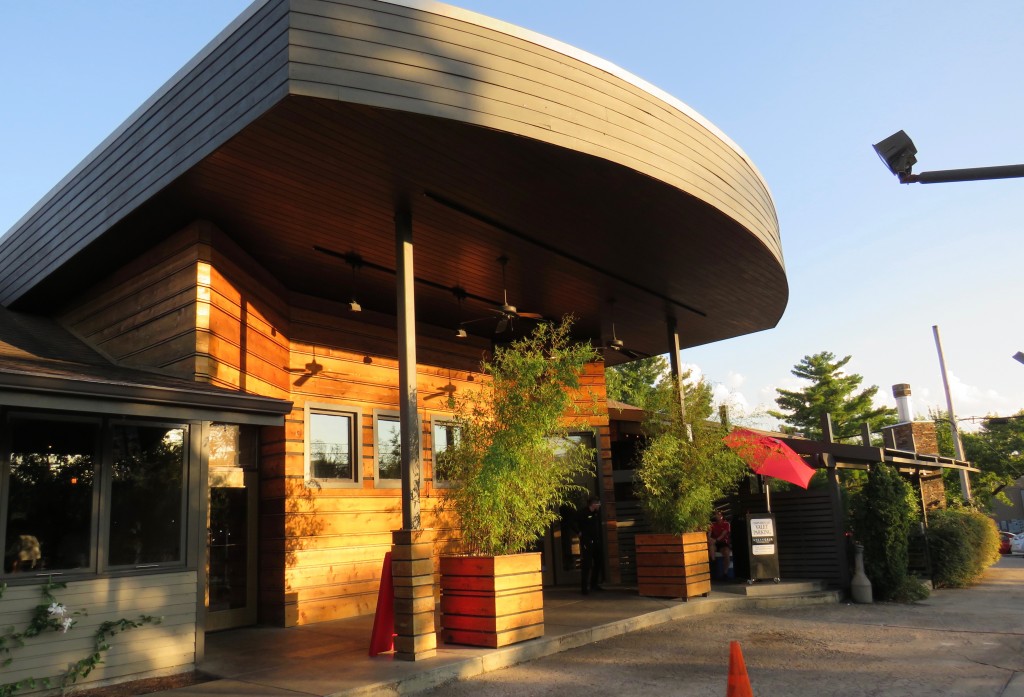 After this pre-appetizer, I headed to Urban Grub, up the street. A rather secret spot since it has no outdoor signage, it’s well known to locals. In fact, you can’t miss the distinctive exterior – it’s located in a renovated carwash.OK, time for the real appetizers and this place had mouth watering choices. I dug into the charcuterie board which included house-smoked meats and prosciutto. The Andouille sausage was superb, a pork loin with batter, rub and sauce melted in my mouth, and I also scarfed down a few delicious peel and eat shrimp and some delicious diver scallops. 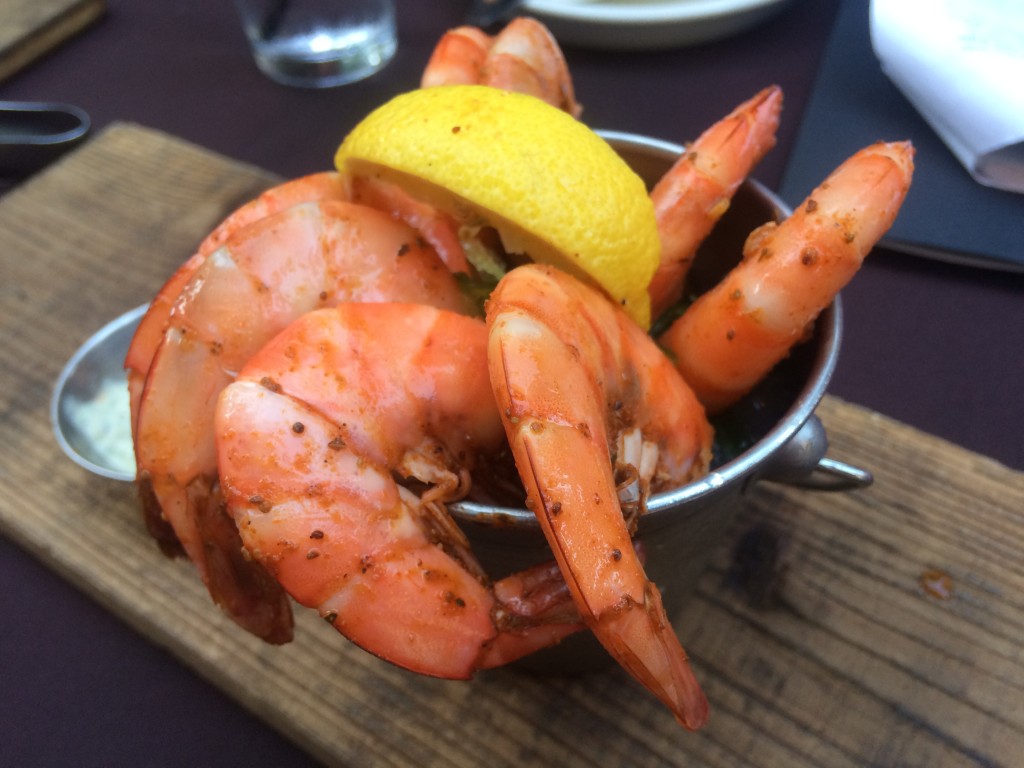 Time for my mains at Josephine where chef Andy Little is focused on classic recipes…Little was a James Beard semi-finalist for Best Chef Southeast in 2017 and I could see why. From Pennsylvania, he fused some traditions from his home state into modern alternatives. For instance, his hot scrapple was ground pork shoulder and chicken liver, corn meal and fennel. “It’s usually made from scraps,” he explained. Also on the menu were roasted chicken, brined overnight, deep fried in peanut oil then roasted, chopped kale salad, fingerling potatoes and pickled mushrooms. Stick-to-the-ribs good. 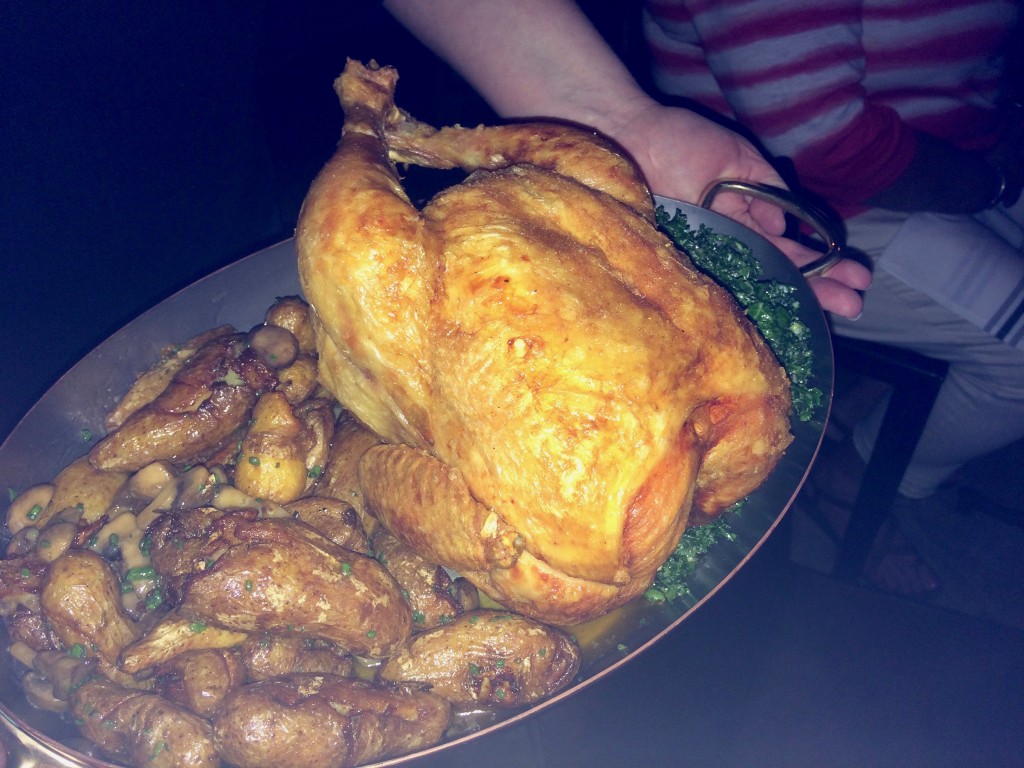 Dessert was at Flipside, also on 12th Ave. S., where milkshakes are a specialty. 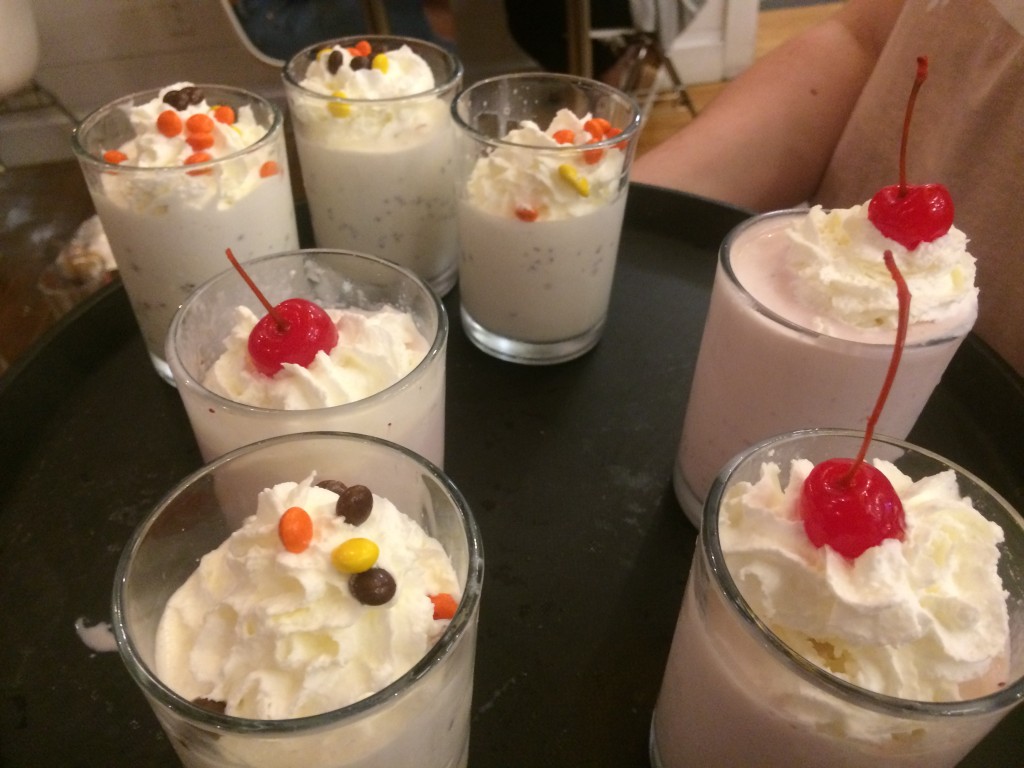 Next day, lunch was at The Farm House, downtown, south of Broadway. Chef-owner Trey Cioccia has come up with a homey décor and a custom menu featuring from-scratch ingredients supporting local or family-owned businesses. 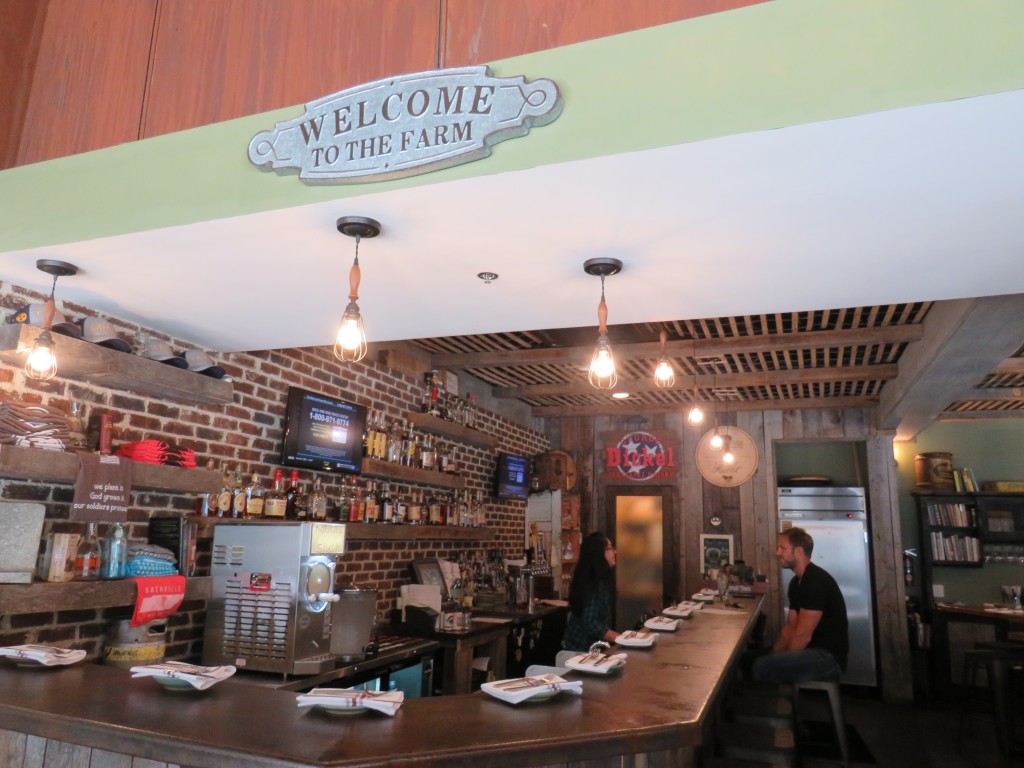 The bar is only of of a handful in the U.S. with all inventory purchased from distillers and brewers operating in the contiguous 48 states. No booze for me, though. Too early. Instead I had a deeply flavourful cup of coffee and a superior club sandwich. 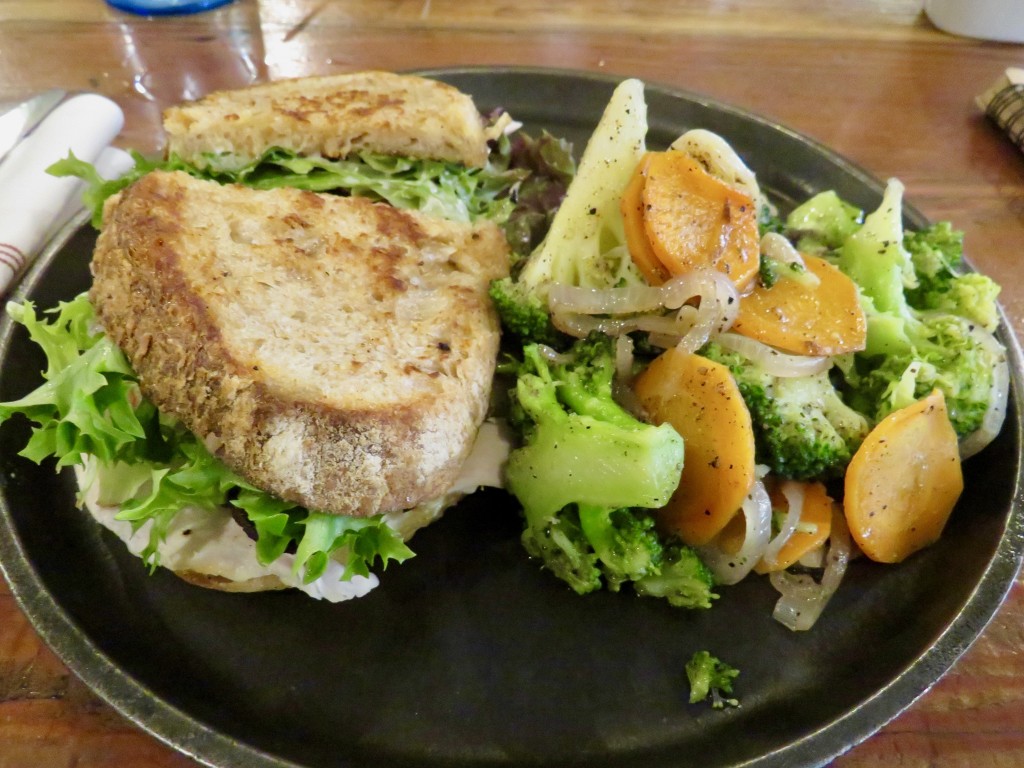 Dinner that night was at Folk, newest venture of Rolf & Daughters chef/owner Philip Krajeck. This place was listed by Bon Appetite magazine as one of America’s best new restaurants of 2018. The place was hopping and a table nearby was filled with women wearing birthday hits. Apparently, I was told, Nashville is a top choice for bachelorette parties. I decided to go light and indulged in the wood-fired pizza … scrumptious. 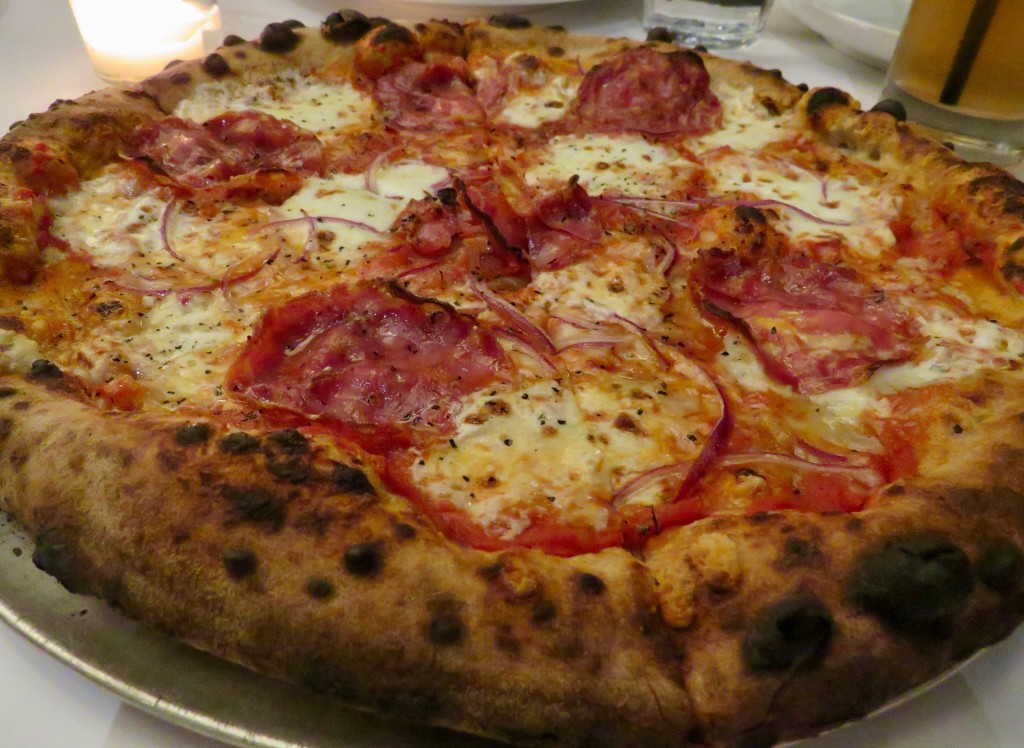 The following day, I headed to Woolworth on 5th, which occupies the historic Woolworth building where civil rights protesters conducted sit-ins that eventually lead to desegregating lunch counters. (See my Nashville Civil Rights post.) Today they make a point that the restaurant “welcomes all.” Southern cuisine reigns supreme here. Fried green tomatoes, fried chicken, pot roast black eyed peas with chow chow, biscuits and grits, corned beef hash. Breakfast is served from 8 a.m. to 4:30 p.m., but it was after noon so I opted for the fried green tomatoes with a dab of goat cheese and an heirloom tomato salad with crumbled blue cheese. Fantastic. 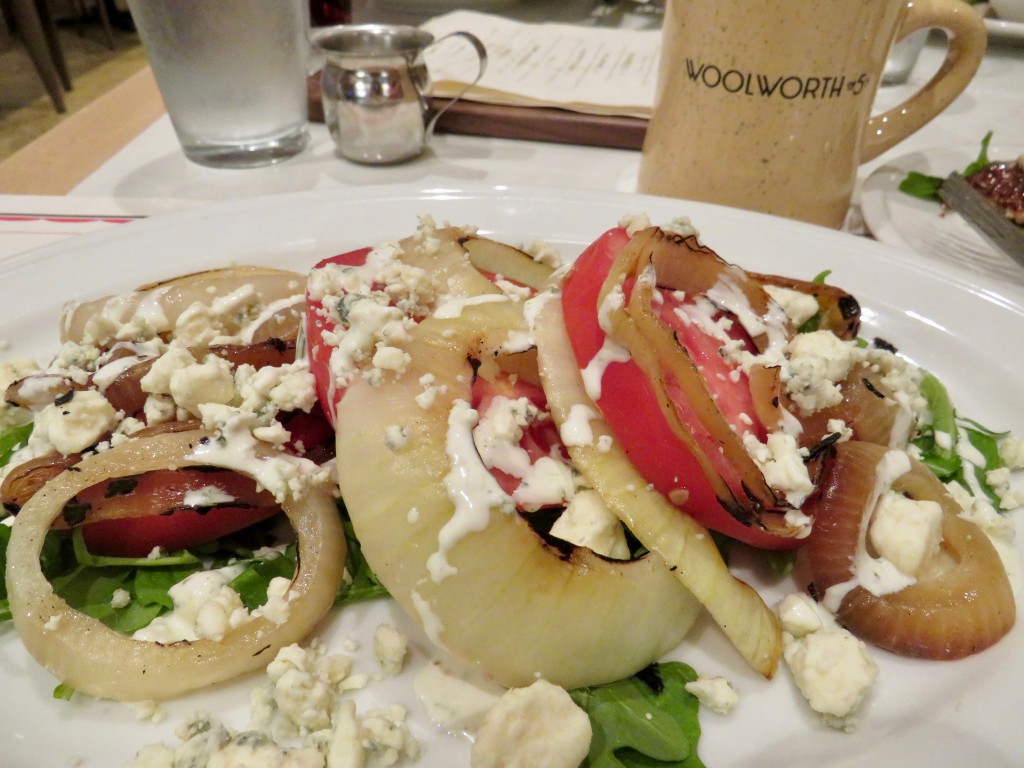 Dinner was at Little Octopus, where influences from the Caribbean, Spain, India, England, Portugal and Lebanon can be seen on the creative menu. 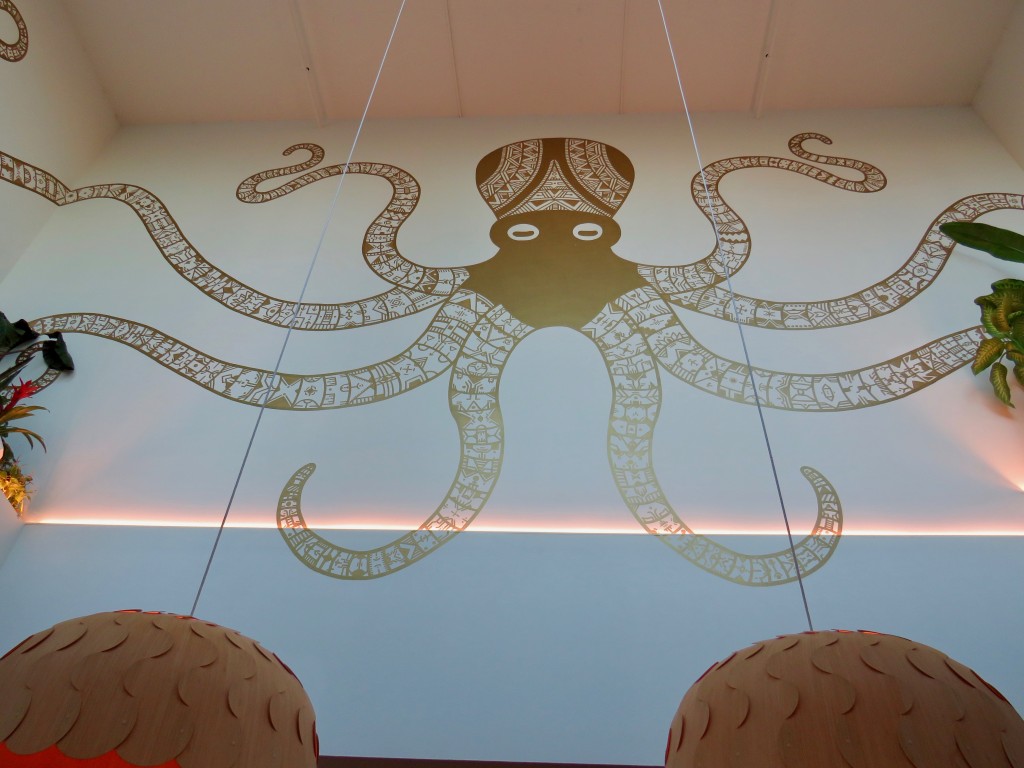 Plates were served family style and our group shared seasonal ceviche with snapper, cobia and scallops, beet salad with fennel, goat cheese and chickpeas, cucumbers with buttermilk and mint and wax beans with black bean sauce and peanuts. Super clean and healthy. A good way to combat over indulgence in the usual southern-fried fare. 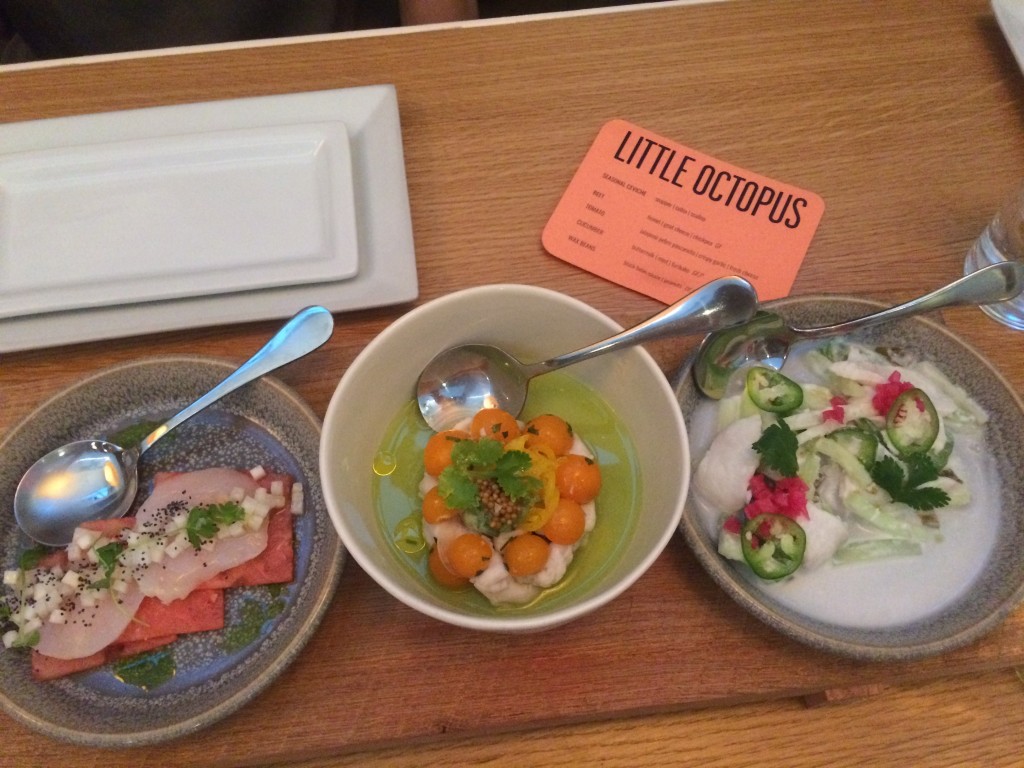 A highlight during my trip was the 1.5 mile Walk Eat Nashville tour with company founder and CEO Karen-Lee Ryan. A former journalist and editor at The Tennessean, Karen-Lee is passionate about her hometown and its good eats. First stop was Hattie B’s Hot Chicken on 19th Ave. S. 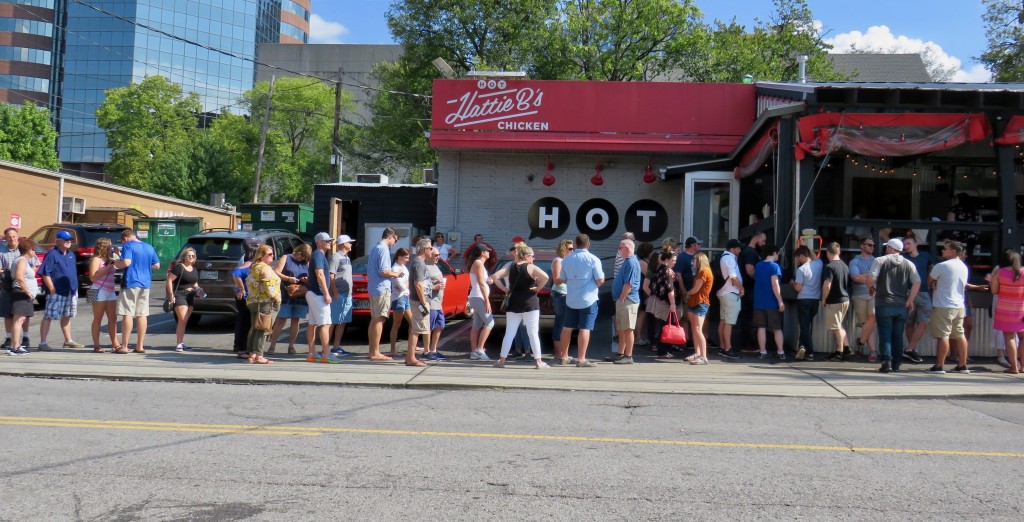 This place gets huge lineups on the weekend, but luckily our group was treated to a quick taste before opening at lunchtime. Nashville Hot Chicken has a story attached. “Forty years ago, Thornton Prince came home from a night of womanizing and his wife decided to punish him. That Sunday night she poured extra hot spice into his fried chicken. But it backfired. He loved it!” says John Lasater, chef and owner of the restaurant. There are now three Hattie B’s throughout Nashville, but the 19th Ave. one is the original location. 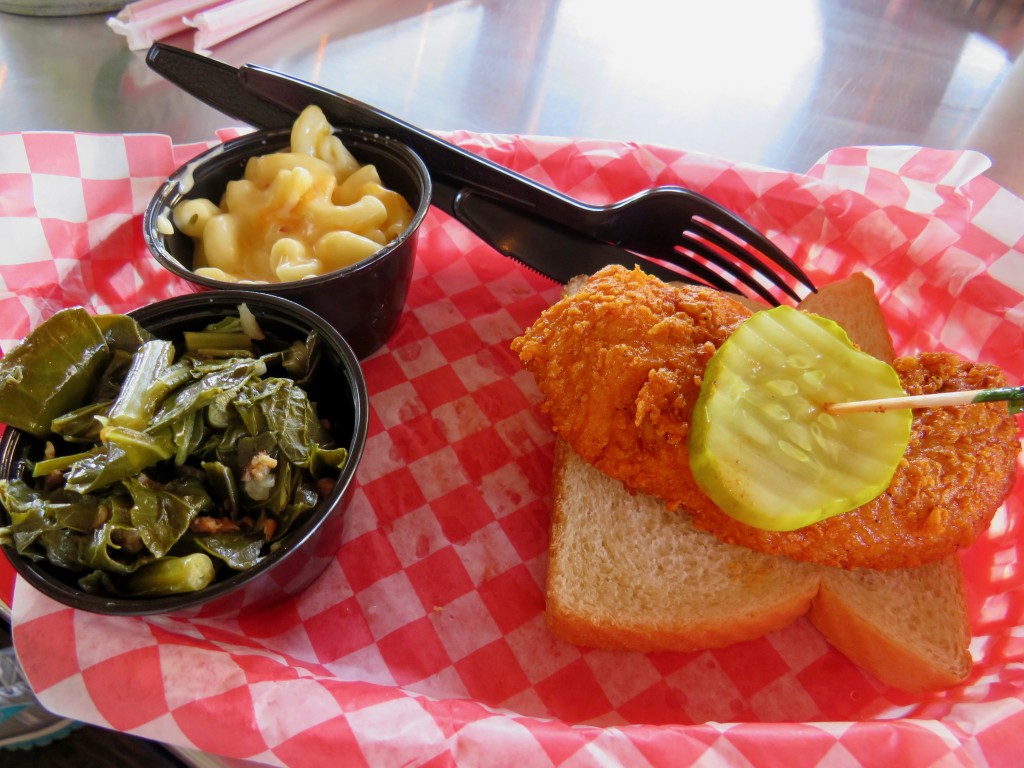 “We offer mild, medium, hot, damn hot and Shut the Cluck Up,” noted Lasater. I opted for medium after Karen-Lee offered, “When I ate Shut the Cluck Up there were tears streaming down my face. I knew exactly where that chicken was in my body at all time.” Um…TMI? 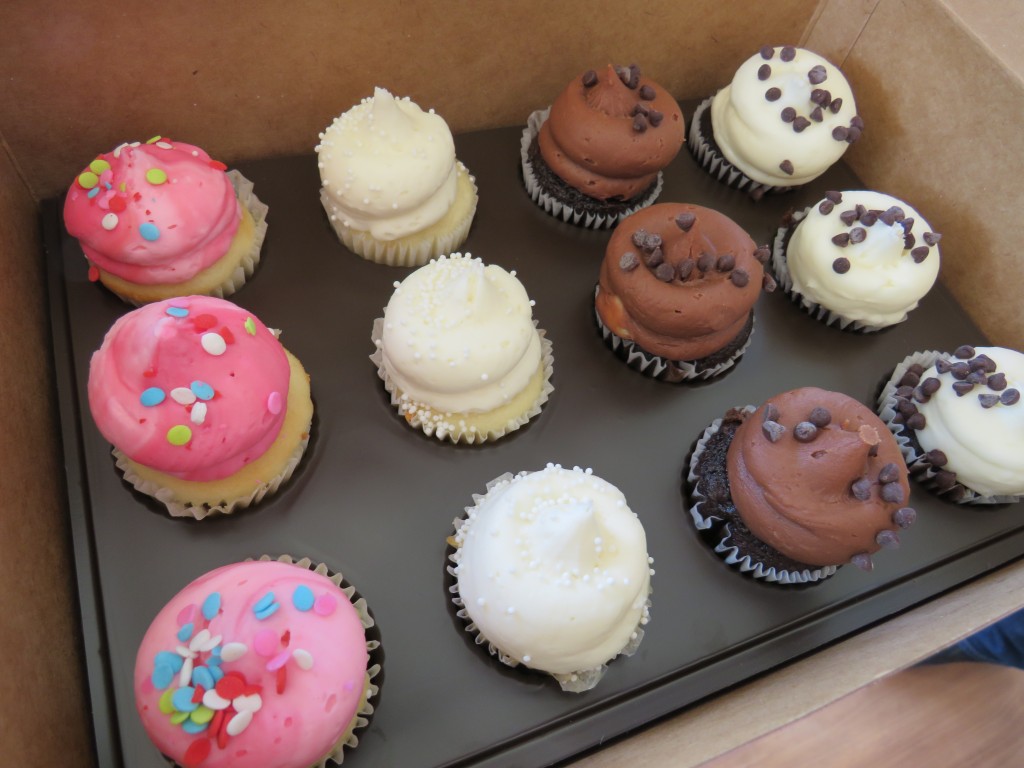 Our second stop was Gigi’s Cupcakes next door. Gigi Butler came to Nashville from California with visions of becoming a country music superstar. Instead she found herself with a maxed out credit card, cleaning house for singer Leann Rimes. Her brother had called her from New York City where he stood in line for cupcakes one evening. “They are not as good as yours. You should start a business in Nashville,” he told her. And she did. Now she has nearly 100 locations in 23 states. Wow. Although Wedding Cake is the number one flavour, I tried Midnight Magic…and that is was. Decadently sweet and buttery. 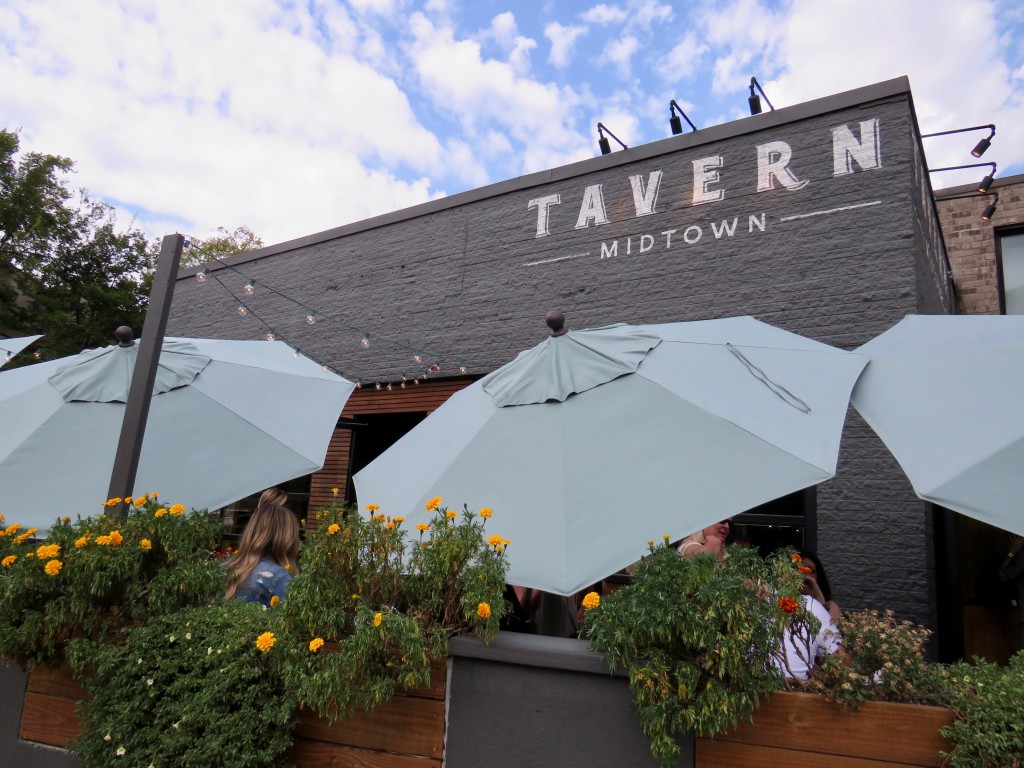 At Tavern Midtown we got back to apps and mains with an amazing kale salad with toasted almonds and Parmesan cheese, Philly cheese steak, and buffalo cauliflower with cornmeal crust and blue cheese dip (my fave). 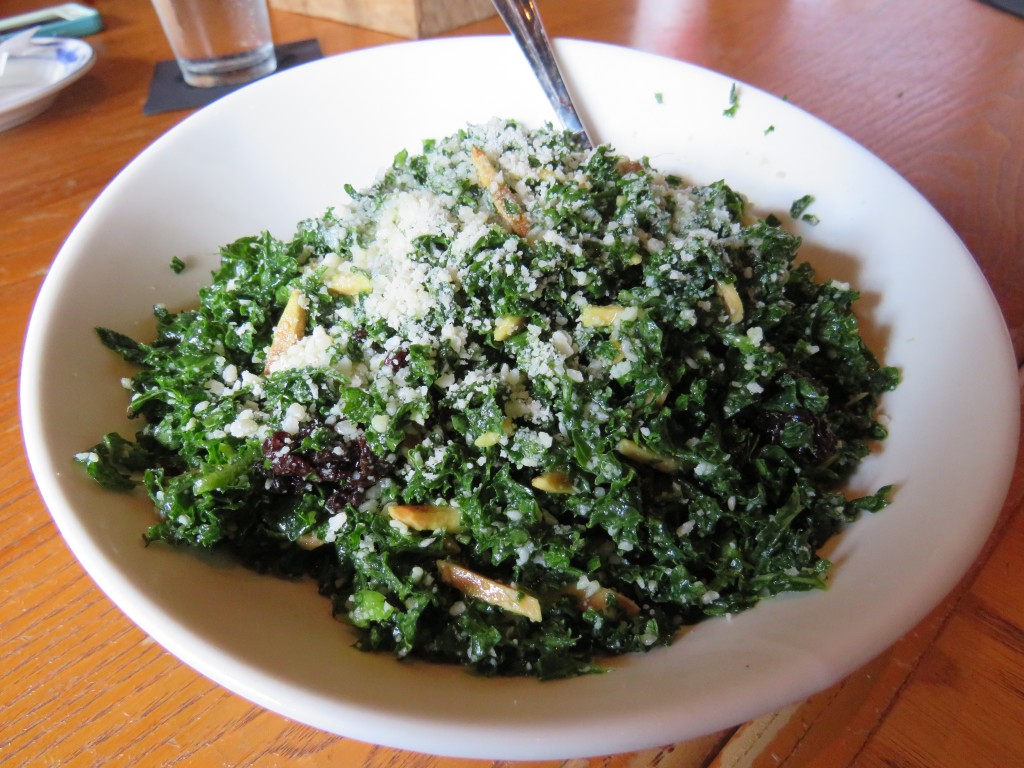 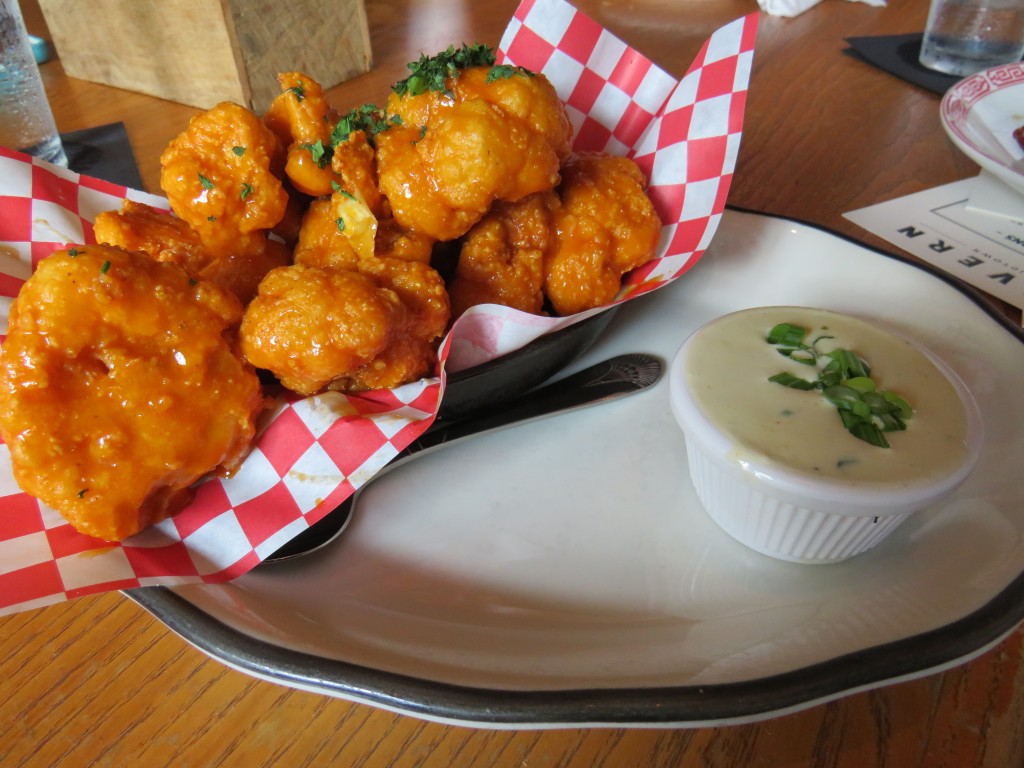 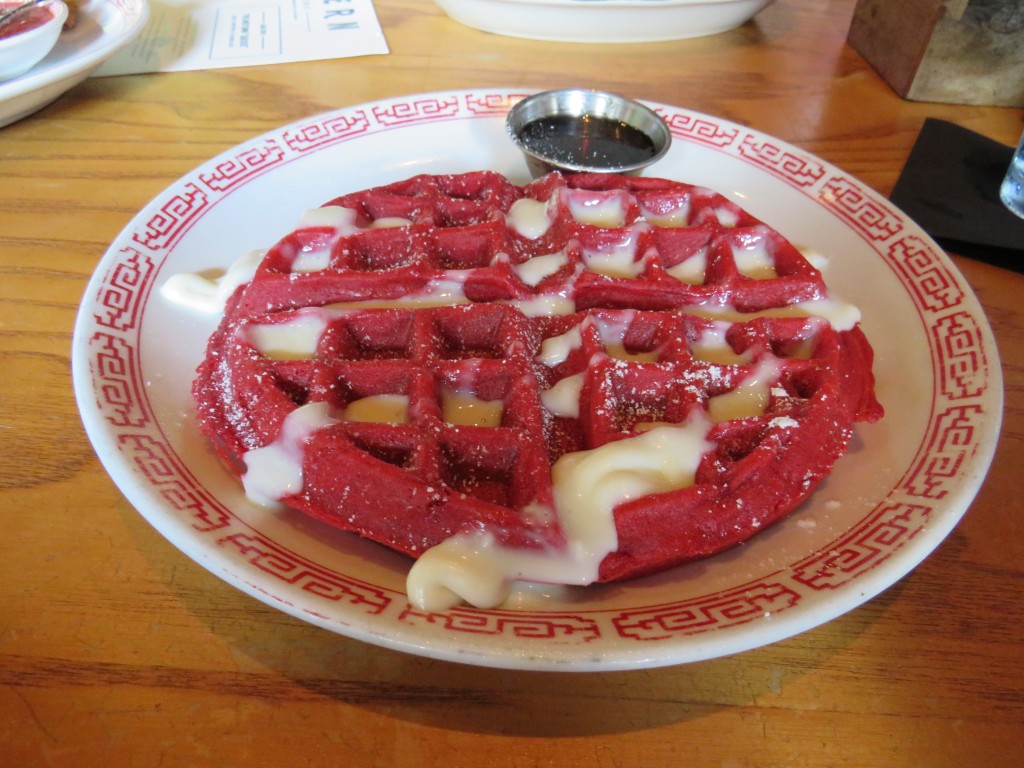 Dessert was red velvet waffles. More decadence! This place was rocking as it is super popular for brunch.
Finally, time for a drink. At Mason Bar in Loews Hotel, I sampled a Music City Spritzer made with Corsair gin, Aperol, grapefruit, and Prosecco. Very refreshing. This place had been voted best hotel bar due to the creativity of the mixologist, plus the great snacks from chef Patrick Gossett, including a small plate of cobia on creamed cauliflower. 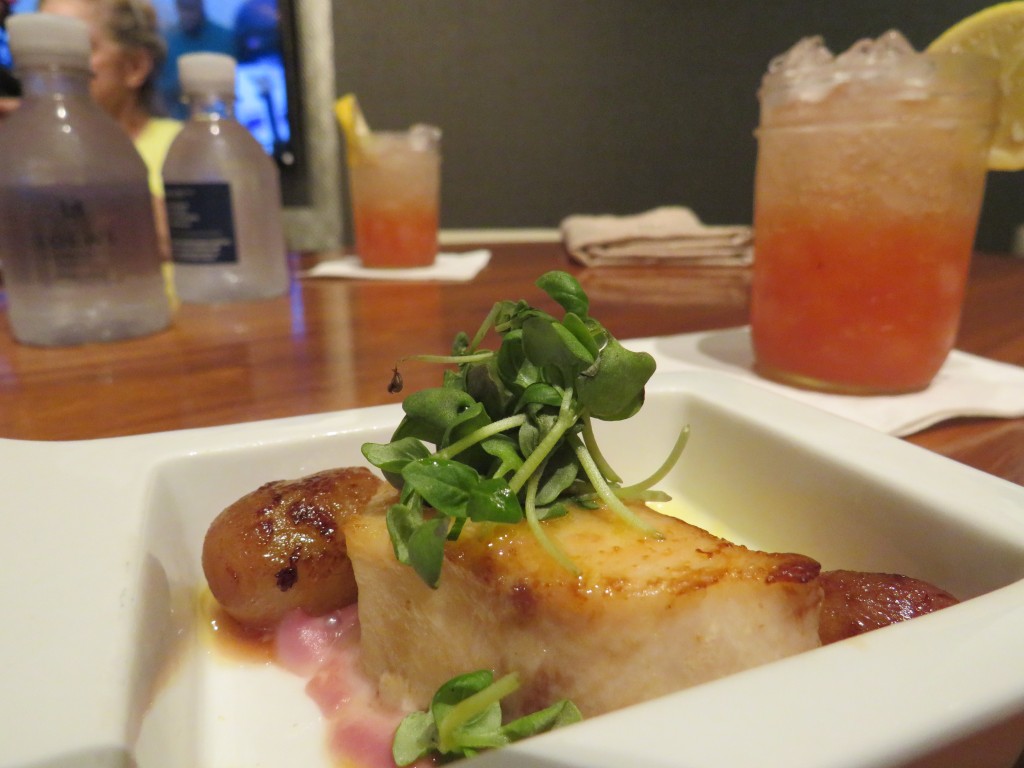 Our final stop on the food tour was Elliston Place Soda Shop. Opened in 1939, this place has had many cameos on movies, Al Gore did an interview here after he announced his run for president and the Nashville TV show has done 10 episodes here. 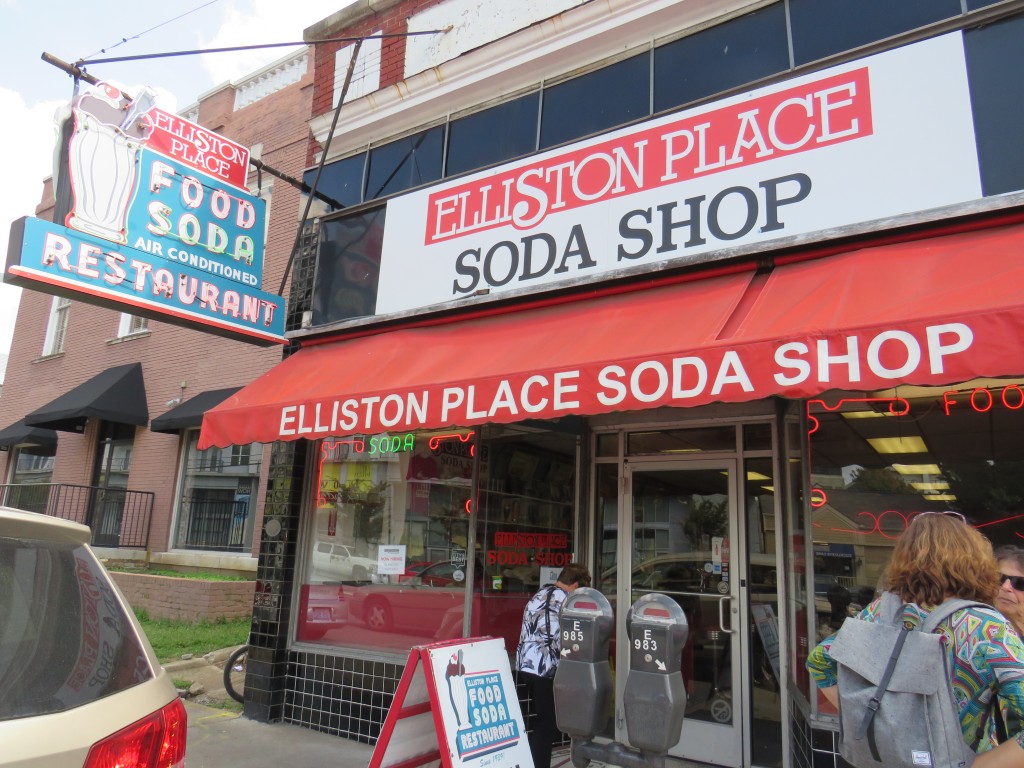 This little 68-seater is not a museum for owner Skip Bibb, who also calls himself “Head Jerk.” 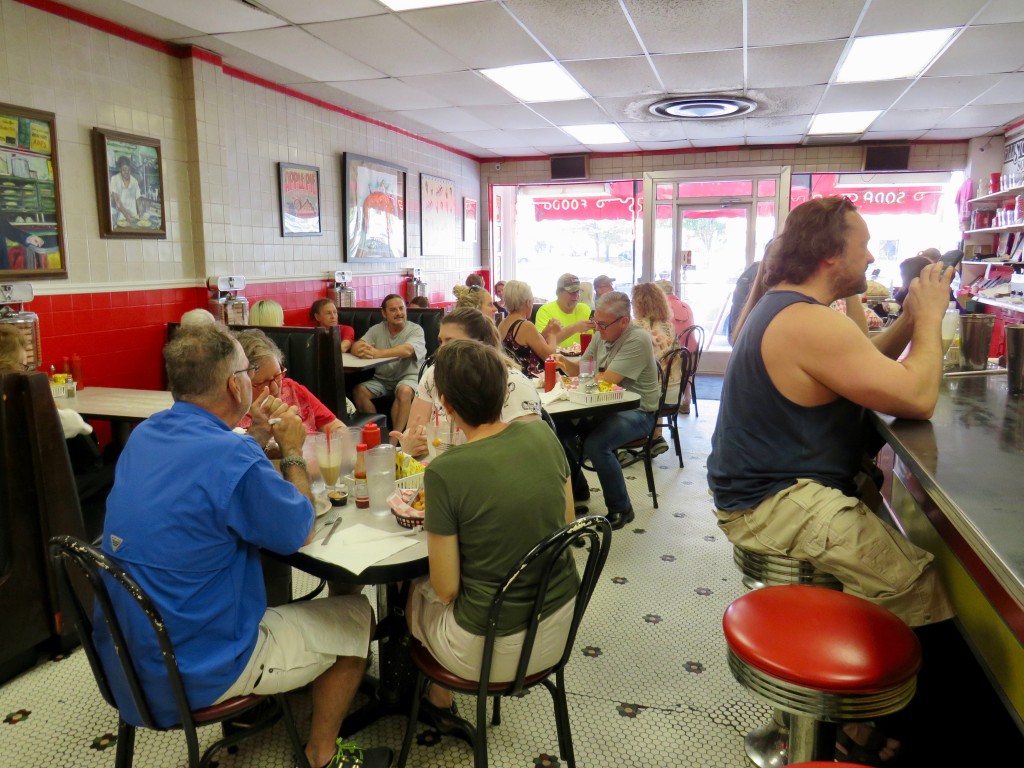 “I feel a sense of stewardship about this place. I haven’t tried to change much because there’s a vivid history here. One couple came by and they were celebrating their 65th anniversary. They’d had their first date here.” It’s also hub for celebs and I noticed John Schneider from Dukes of Hazzard was sitting in a banquet while we were there. He probably came in for a milkshake, since they were voted No. one for the creamy confections in Nashville.
The last night’s dinner was at Nicky’s Coal Fired, where coal fired pizzas are baked in a four-ton oven. 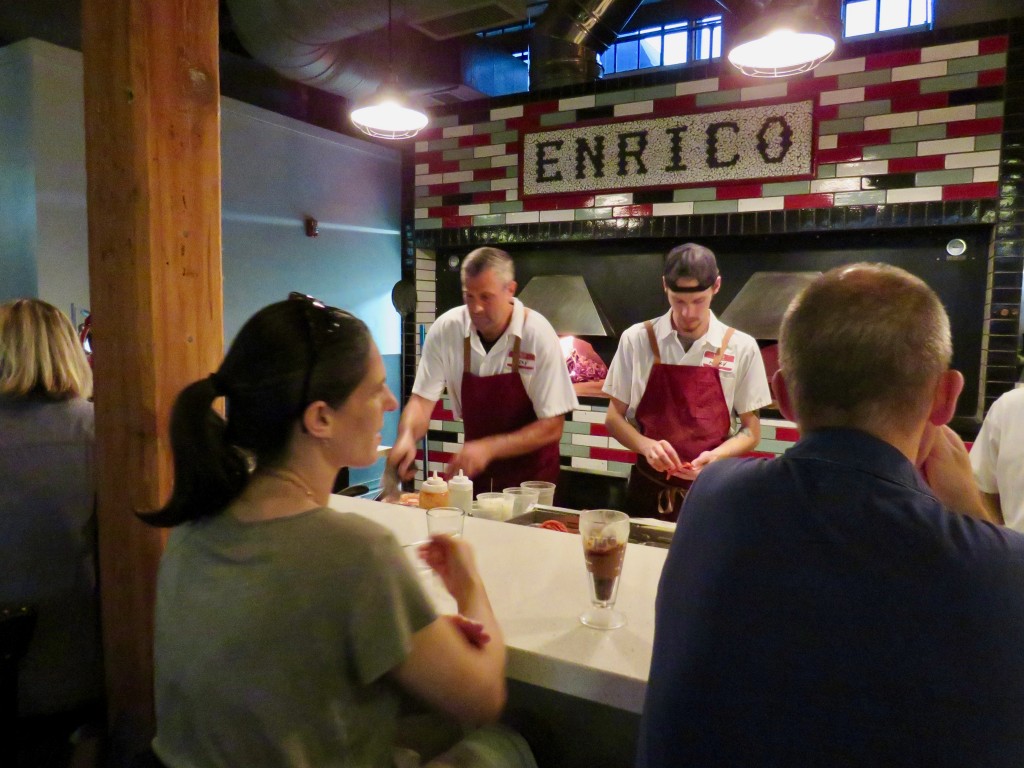 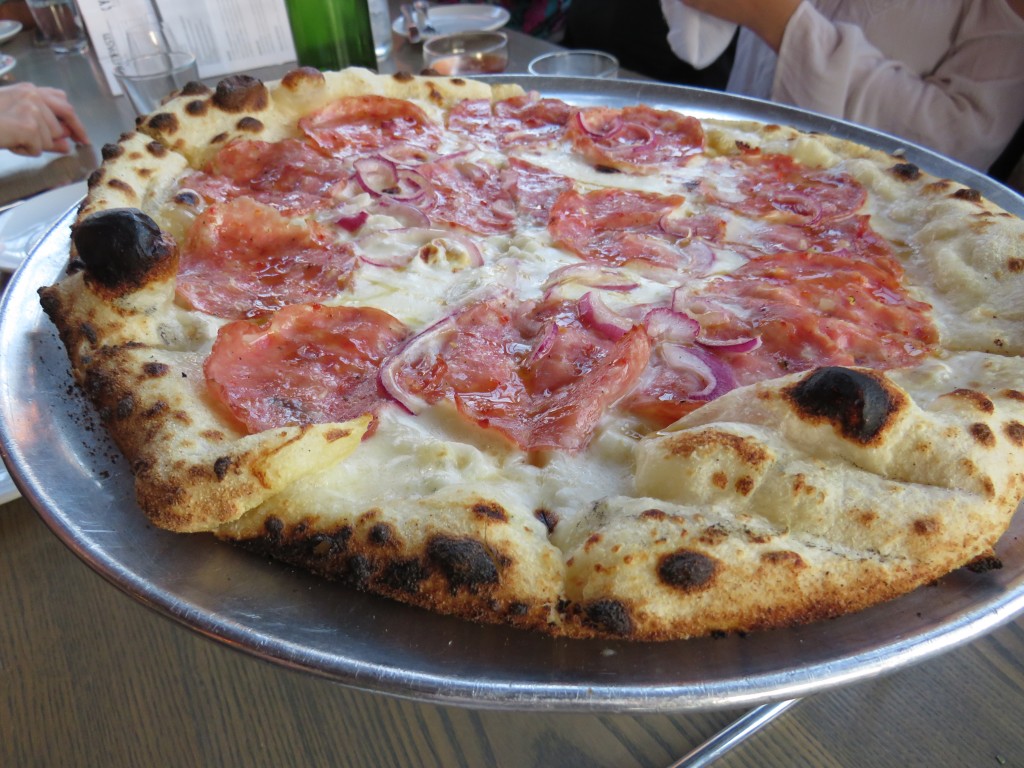 This was just the tip of the iceberg. Nashville has become a culinary hot spot. “A hundred new restaurants opened last year,” Karen-Lee told me. Why? “Nashville in a creative place. Musician are all about collaboration and so are the chefs. Here, they don’t work in isolation, but support each other.” Next time I’ll bring my extra-stretchy pants.

This entry was posted in Destinations and tagged Nashville. Bookmark the permalink.