Posted on December 6, 2018 | Comments Off on Biting into the Fairmont Banff Springs Hotel 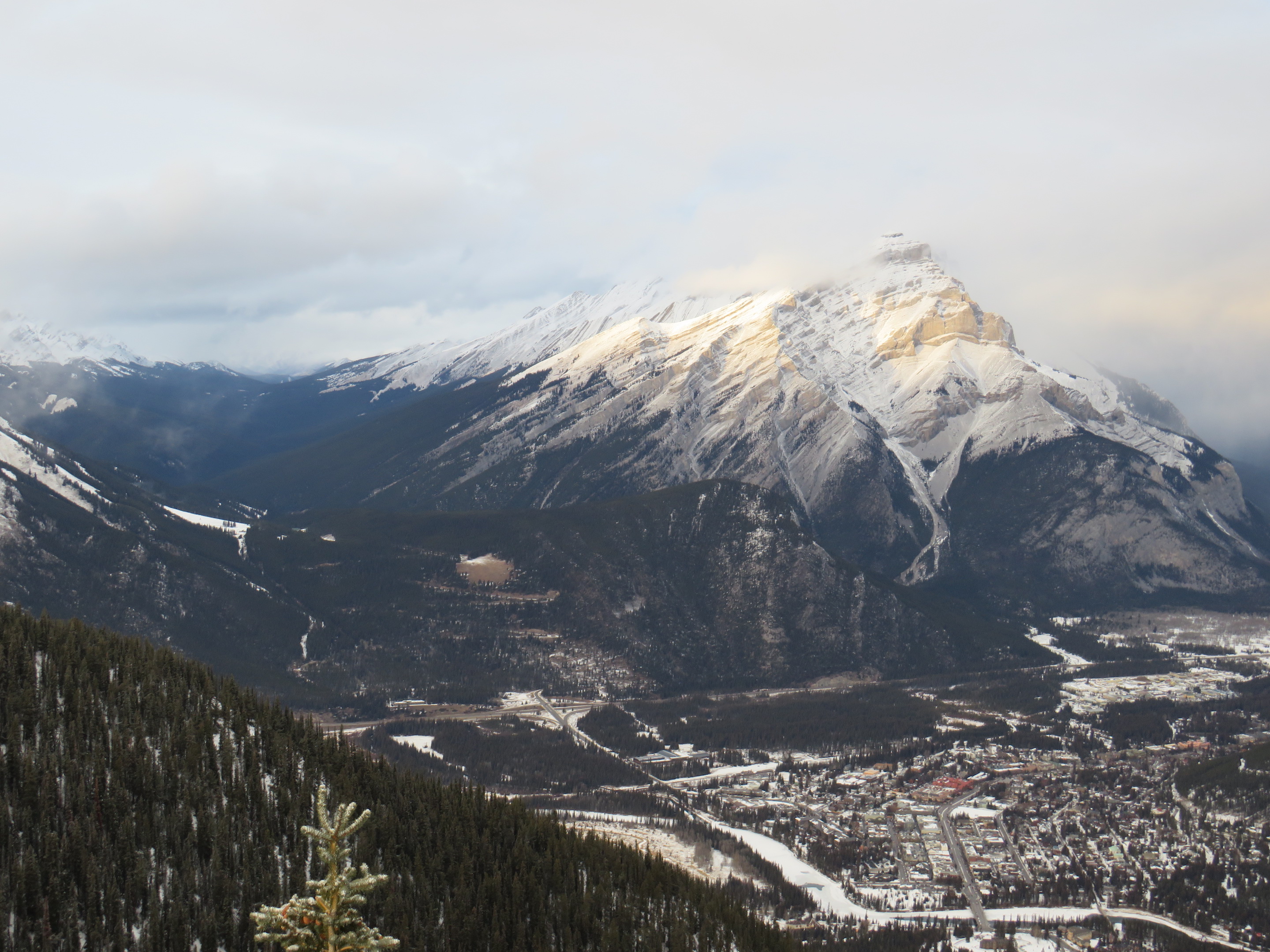 I knew Banff’s mountains were jaw-dropping, but I had little knowledge of the culinary treasures to be found there until visiting this November.
It all began in the Scottish baronial castle known as the Fairmont Banff Springs Hotel. 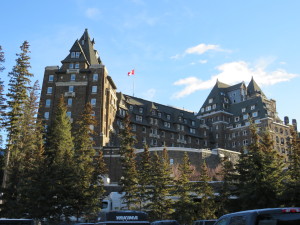 After checking into my room and gasping at the gorgeous view, I looked down at the desk and this is what welcomed me! 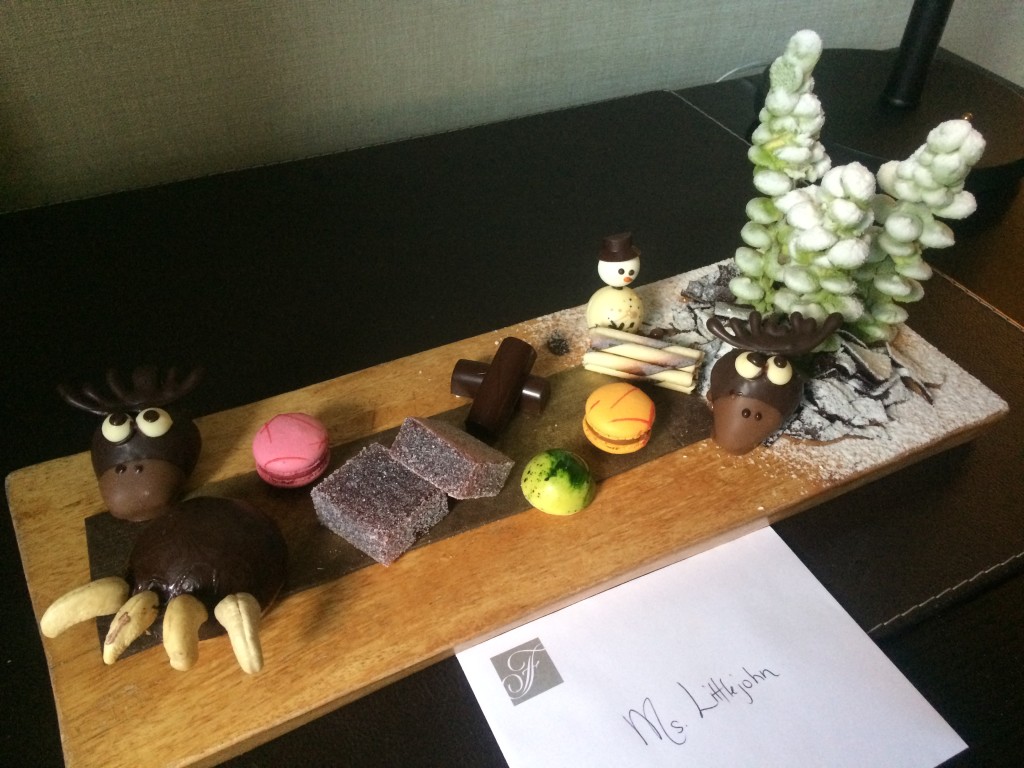 Yeesh. A very good start. Wanting to explore the hotel’s many foodie options, I signed up for the “Eat the Castle” walkabout, led by Alberta Food Tours president and CEO Karen Anderson. “This is a history, art and architecture tour meets food tour,” she explained of the $175, two-and-a-half-hour indoor expedition. The tour is billed as sampling both food and beverages in four of the hotel’s onsite noshing venues. My group was also lucky enough to have the hotel’s executive chef Robert Ash join us. Ash had just joined the Fairmont four months prior (previously he had been resort executive chef for Omni Hotels in Orlando) and his dedication to every detail was deep.
Our first stop was at Stock Food & Drink, a breakfast, lunch and snack emporium off the lobby. 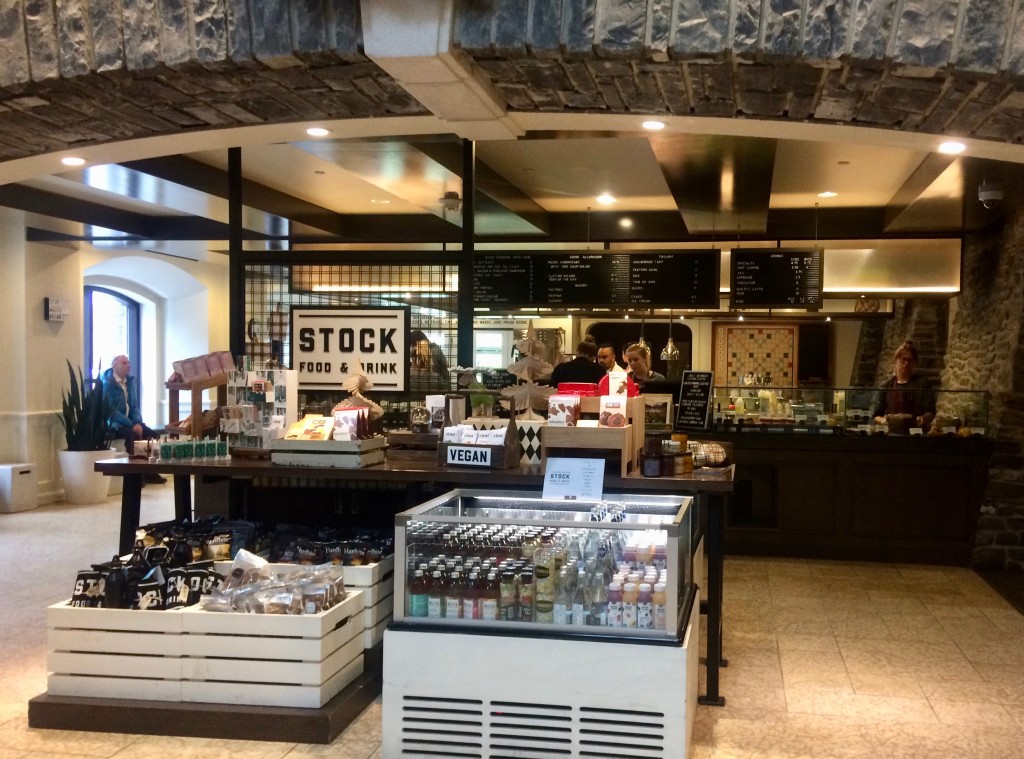 Robert stopped in front of the cultivar, a set of temperature-controlled wall cabinets with grow lights and trays of tiny seedlings. 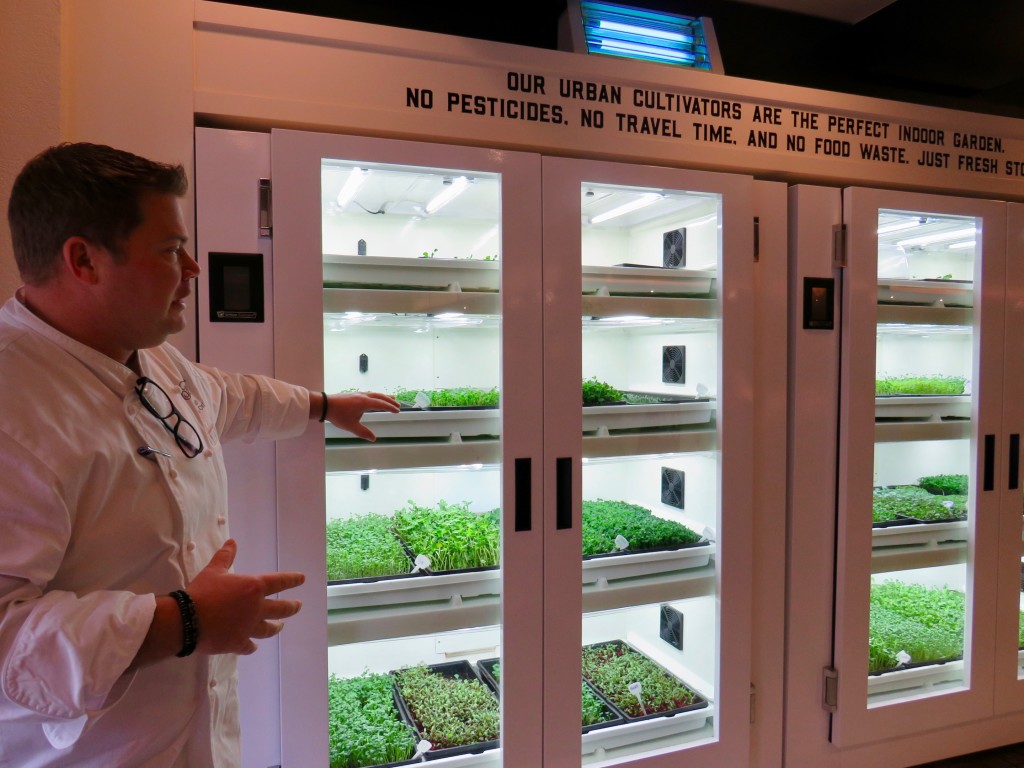 “What would you like to try?” he asked. I opted for a thumb-sized sprout of kale. So tender! Other trays contained an array of tiny greens including cabbage, peas and sunflowers. The micro-greens are used in all 12 of the hotel’s restaurants and food outlets. Robert shared a bit of culinary data – the hotel sources from 25 farms in the area, there are 25 chefs in the apprentice program, 150 chefs in total and they serve between 1.5 and 2 million meals a year. Wow. Sitting at a long table in Stock, we sipped a glass of locally made Grizzly Paw Power Hound blonde ale and nibbled on a variety of sandwiches including goat cheese and roasted peppers, smoked meat and house-cured bacon and tomato. 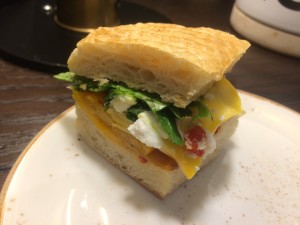 “Ninety per cent of what the hotel serves is made in house including sausages and charcuterie, bread, pastries, pickles and vinegars. We specialize in local sustainable cuisines, have an in-house butchery, and are part of the Ocean Wise Seafood program,” Ash told us.
As we made our way to the next sampling, Karen gave us a bit of hotel history. The building was the brainchild of Pacific Railway CEO George Stephens who brought in architect Cornelius Van Horne. Van Horne designed a series of gorgeous CP hotels back at the turn of the last century that connected the railway and the country and this was his second (Hotel Vancouver was the first). The Banff Springs Hotel opened in 1888 and originally was a wooden structure (and built backwards to plan!). In 1926 there was a fire and in 1928 it was rebuilt, this time of brick and stone (Rundle Rock from Mount Rundle, overlooking the hotel). 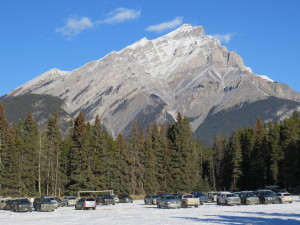 Karen pointed to a Latin crest woven into the lobby rug, “It spells out the hotel’s motto ‘Semper Eadem,’ Always the Same.” There have been a few additions and changes to the 754 guest-room hotel over the years, but the exterior facing of Rundle Rock has always been maintained.
At Grapes, on the mezzanine-2 level, we tucked into two boards of charcuterie, smoked trout and cheeses. 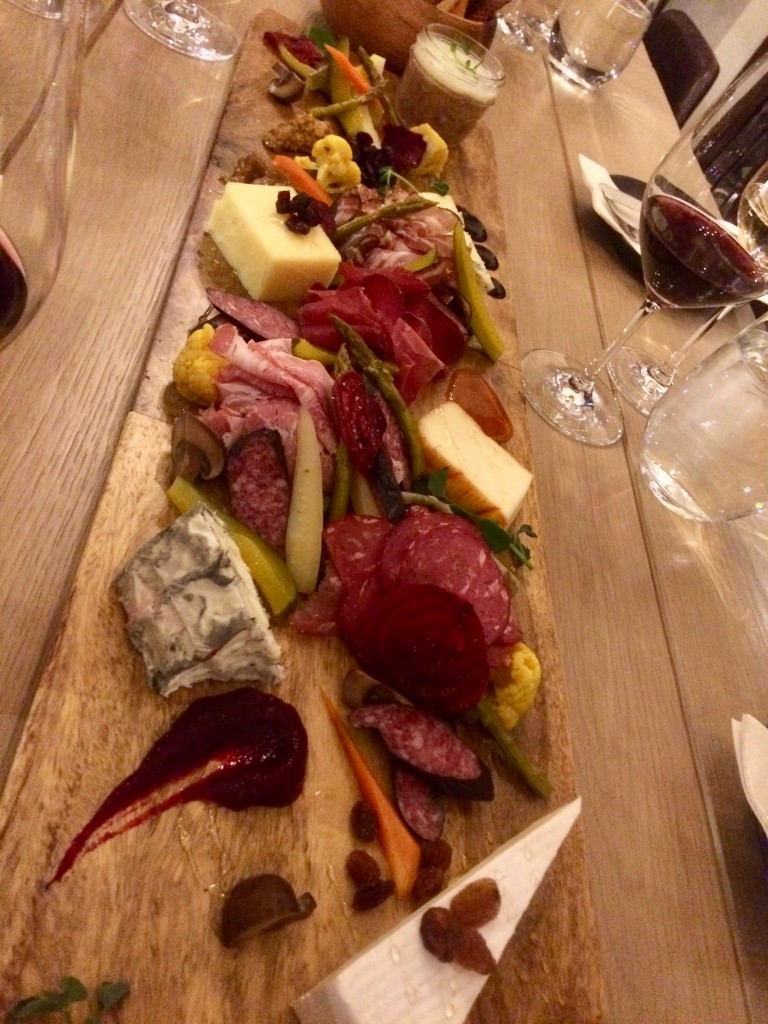 Grapes chef de cuisine Tait Robinson pointed out the three types of trout, smoked and candied with maple syrup, gravlax and a hot smoked variety with brown sugar and salt. The hot smoked was my favourite. There was also a velvety duck liver pate, elk salami, Canadian camembert with quince jam and bread and butter pickles. All paired with a light white Cote du Rhone.
Karen then held up cards with French names of a kitchen team. Chef de Partie, saucier, potager, rotisseur, grillardin, friturier, poissonnier. Who knew?
In the 1888 Chop House, we stopped by the bar to sip a deep purple blackberry margarita made with Chambord, Don Julio blanco tequila, lime juice and a pink salt and pepper rim. 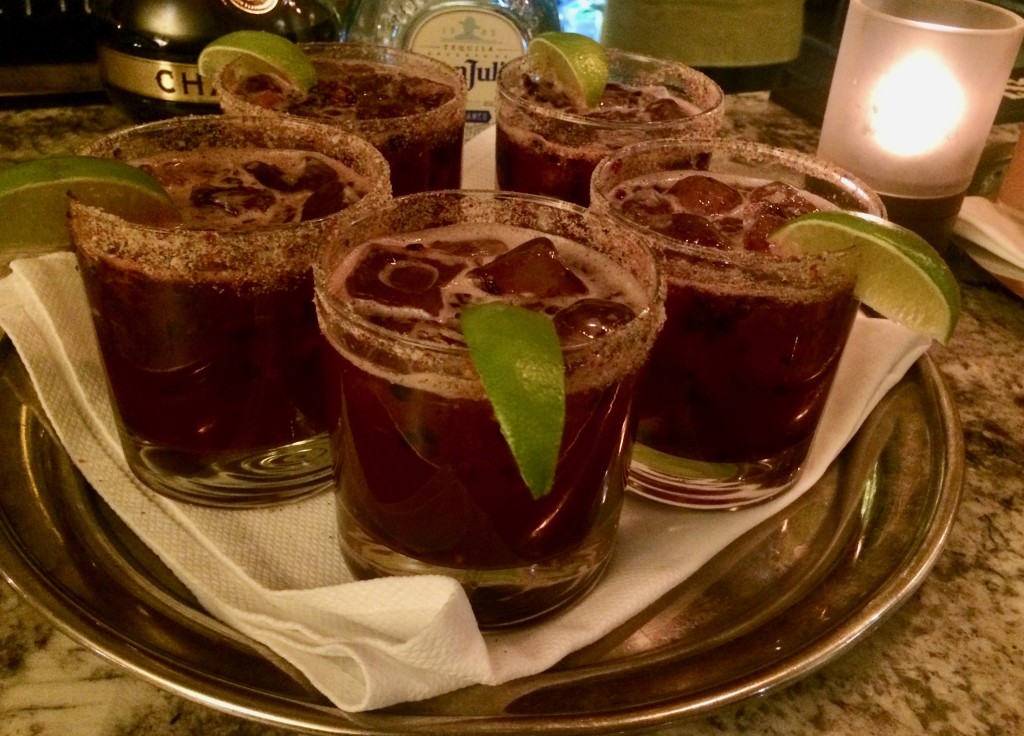 Next was the beef…a huge tomahawk chop and bison tenderloin that was sliced up family style. 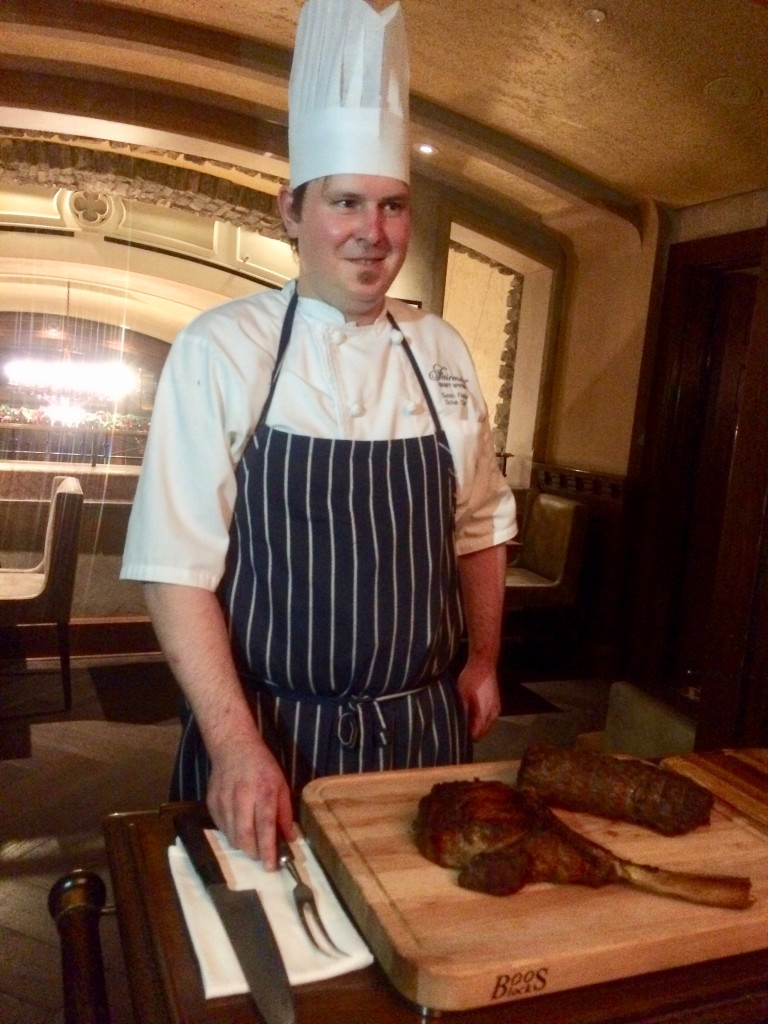 In Alberta, they know how to do red meat!
The regular tours usually end with a do-it-yourself profiterole-making session in the Vermillion Room, but Chef Ash, who is partial to sweets, wanted to do something special for our little band of writers and he pulled out all the stops. What does that mean? 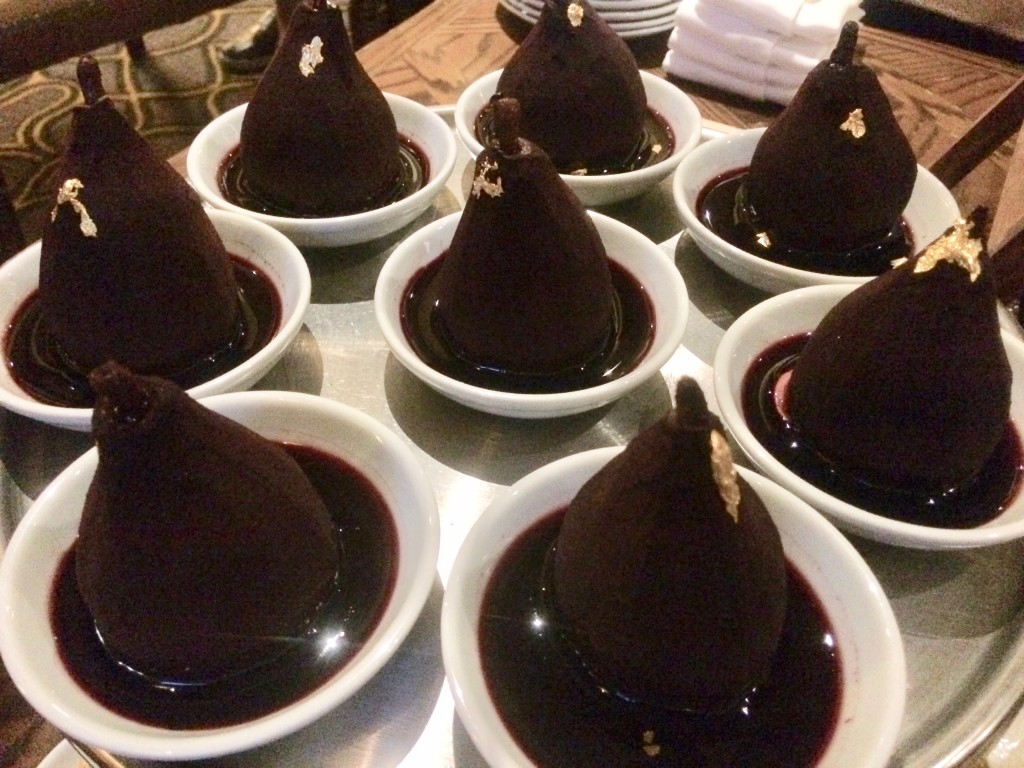 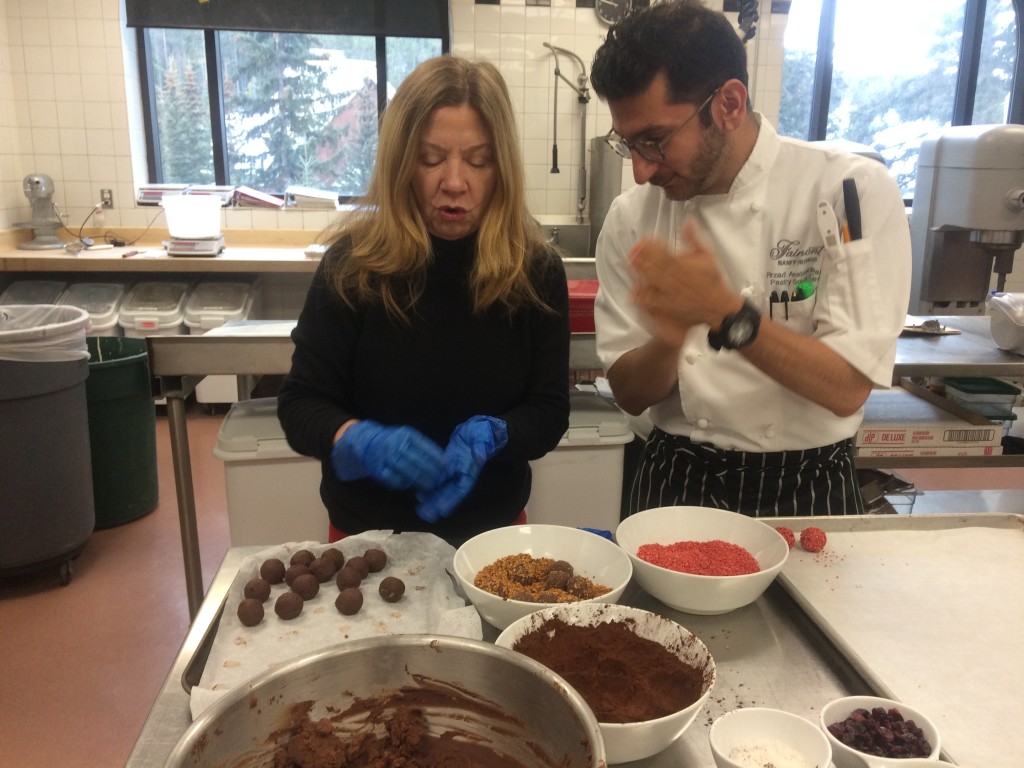 More sugar was just what I needed and I found myself making Grand Marnier truffles at 10 a.m. with chef Pirzad Amalsadiwalla. We learned about the tempering process of heating and cooling chocolate so that it remains solid at room temperature. 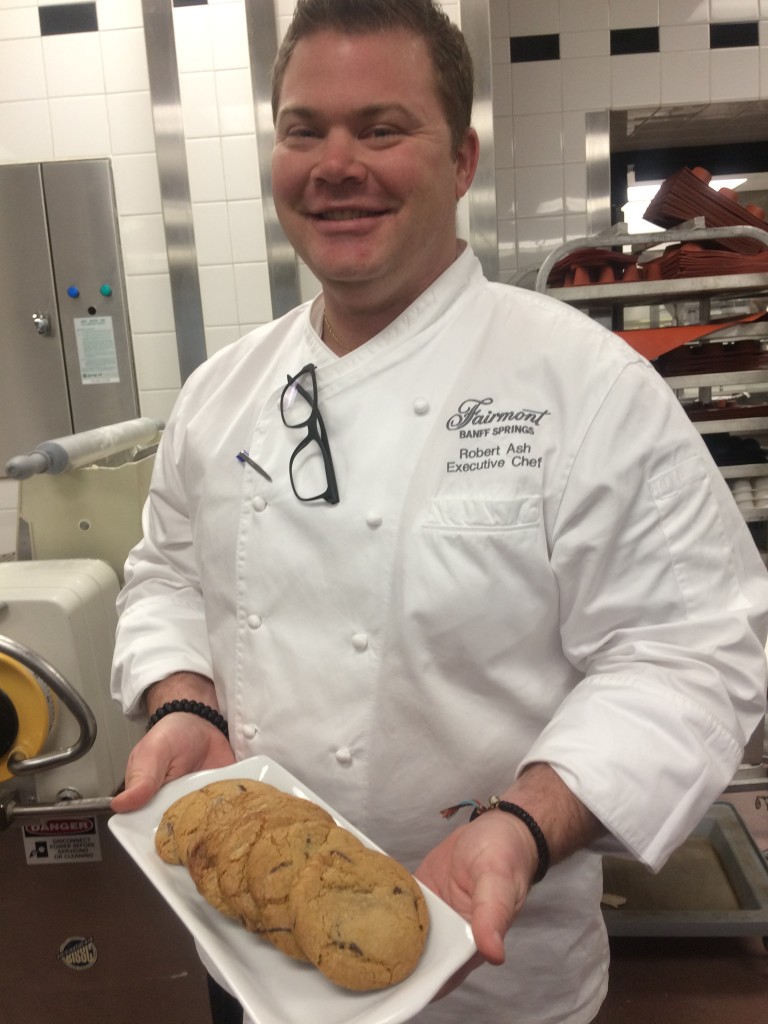 We even tried some of Chef Ash’s chocolate chip cookies, “Made from my family’s recipe,” he confided. The combination of pure butter and chocolate was irresistible. Pirzad told me some of his chocolate bon bons can take a day more than a day to make. He also did a demonstration of dark chocolate bark sprinkled with festive pumpkin seeds and cranberries. “Who doesn’t love making people happy with chocolate?” he responded when asked what drew him to this specialty.
In the hotel butchery we watched meat expert Derek Alexander slice up a side of beef from Benchmark Angus Ranch, outside of Calgary. 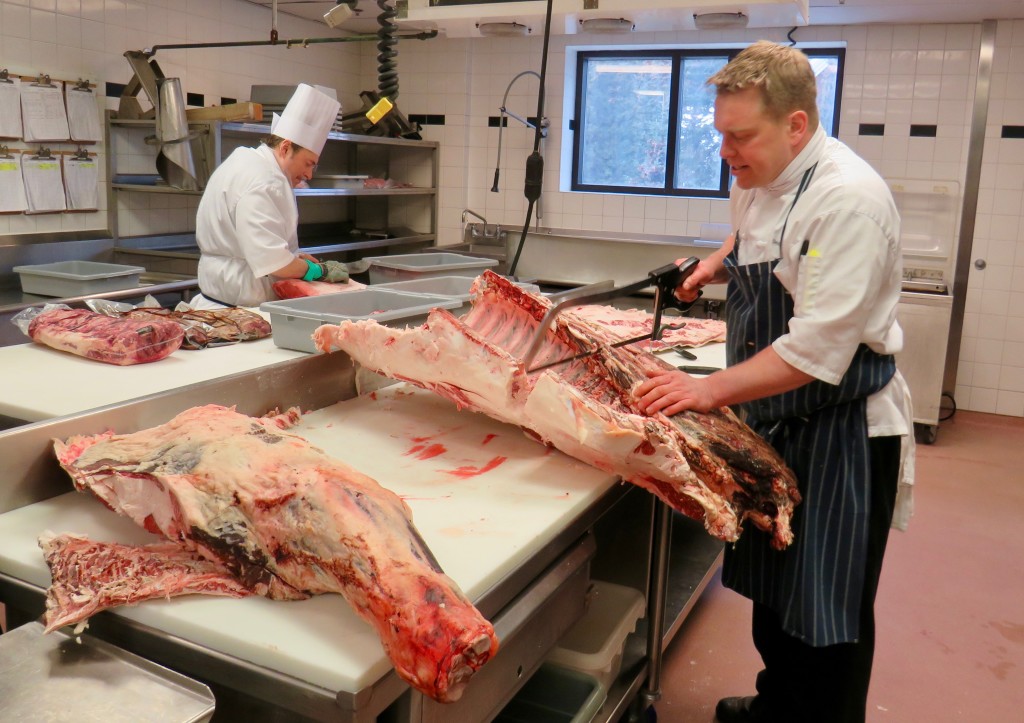 “We only serve Prime, it’s one notch above AAA,” he told us.That afternoon he was scheduled to stuff sausages. What kind do they do? You name it, chicken, pork breakfast, calabrese, bratwurst, chorizo, and beef. Peeking into the cooler he showed us a rack of Christmas hams and a seasoned tray of wild boar belly. “You won’t find any store-bought deli meats here,” he said. Game meats are on many of the hotel restaurant menus, including farm-raised bison and elk. “People want to eat what they see in the park,” he explained. All the trimmings get used in a variety of ways, including in confits and mashed potatoes. 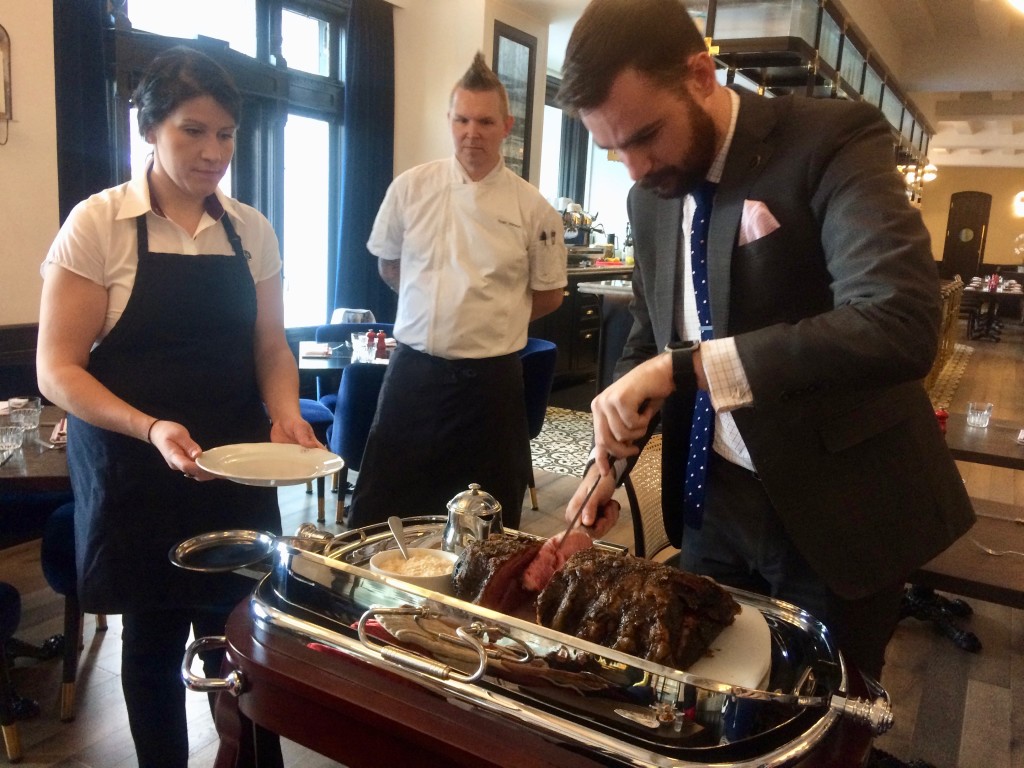 We capped the morning with a lunch in the recently renovated Vermillion Room, where chef Ryan Watson oversaw the carving of a melt-in-your-mouth Alberta raised prime rib roast, matched with mashed potatoes, and a platter of roasted vegetables. 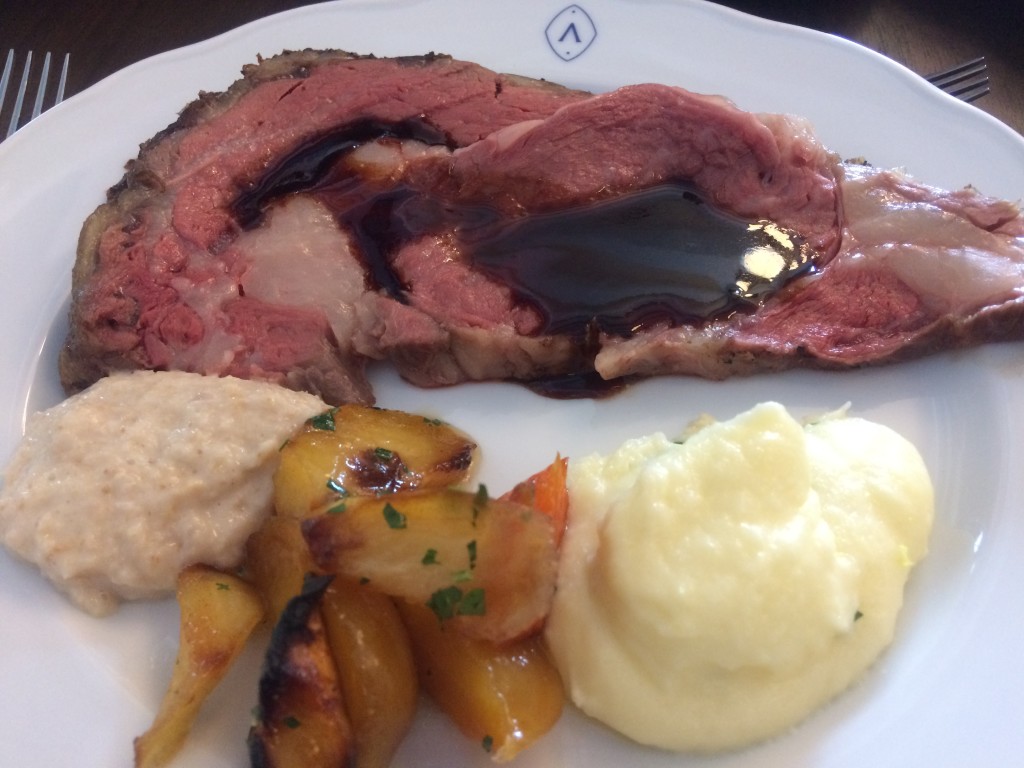 A newly introduced Sunday night special!
The Fairmont Banff Springs is truly a world of its own. It’s a place where you’ll never get bored…or hungry.
(see my next blog about Banff’s other culinary hot spots)

This entry was posted in Destinations and tagged Banff, Food. Bookmark the permalink.