Posted on December 10, 2018 | Comments Off on Hanoi’s Imperial Citadel 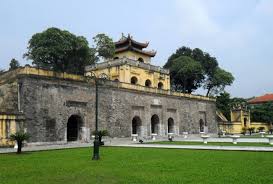 Hectic Hanoi is full of history and while living there I found a little slice of peace on the grounds of the Imperial Citadel of Thang Long. Bonsai plants and random buildings were scattered throughout the complex’s almost 20 hectares. Plus, I was able to examine all sorts of architectural relics that had been uncovered in the ongoing excavations. There isn’t a lot of explanation available in English onsite, so I did a bit of my own digging. According to Wikipedia, the royal enclosure was first built during the Lý dynasty (1010) and subsequently expanded by the Trần, Lê and finally the Nguyễn dynasty. It remained the seat of the Vietnamese court until 1810, when the Nguyễn dynasty chose to move the capital to Huế. 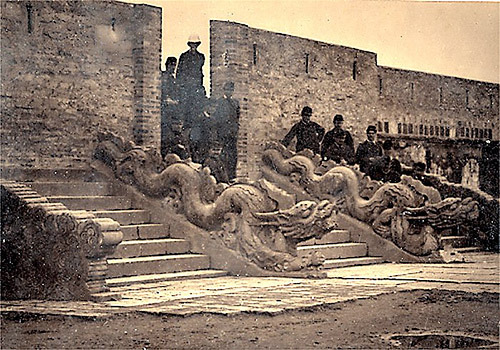 French soldiers taking photos on the steps of Kinh Thien Palace during the encamping period here. (Taken by Doctor Charles – Edouard Hocquard during 1884 -1885)
The royal palaces and most of the structures in Thăng Long were in varying states of disrepair by the late 19th century with the upheaval of the French conquest of Hanoi. By the 20th century many of the remaining structures were torn down. Excavations began in the 21st century and in 2004 the site was opened to the public. The central sector of the imperial citadel was listed in UNESCO’s World Heritage Site on July 31, 2010.
The few remaining structures within the royal compound are the Doan Mon gate, marking the southern entrance to the royal palace, the Flag Tower, the steps of Kinh Thiên Palace and the Hậu Lâu (Princess’ Palace). Thus far only a small fraction of Thăng Long has been excavated. 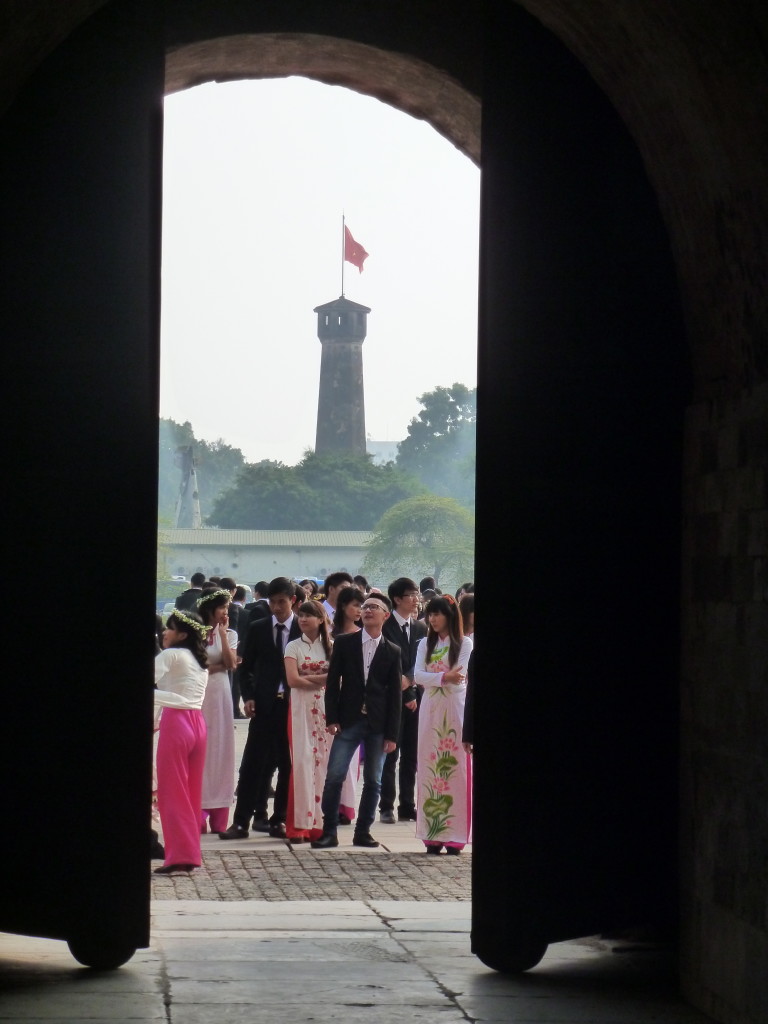 Perhaps the most iconic of the remaining structures is the Flag Tower. Rising to a height of 33.4 m (41 m with the flag), it is frequently used as a symbol of the city. Built in 1812 during the Nguyễn dynasty, the tower, unlike many other structures in Hanoi, was spared during the French colonial rule (1885–1954) as it was used as a military post. 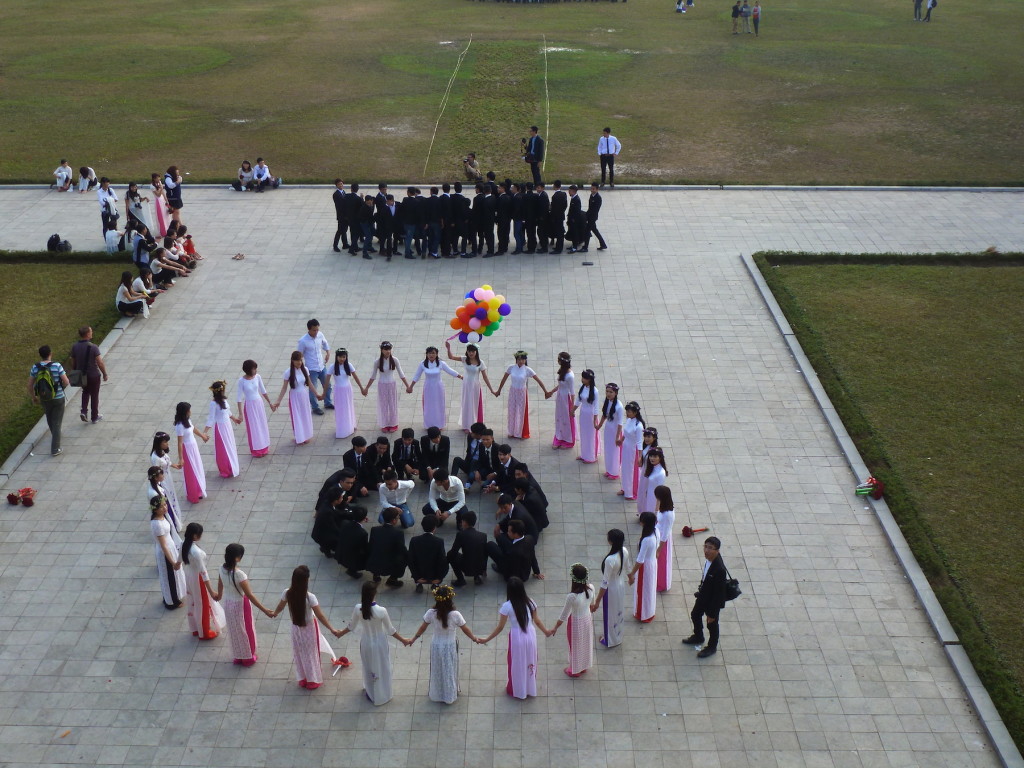 If you visit during graduation season, October-November, you’ll get a chance to see the students who come to have their pictures taken. I loved seeing the young women in their gorgeous traditional garb, called ao dai. 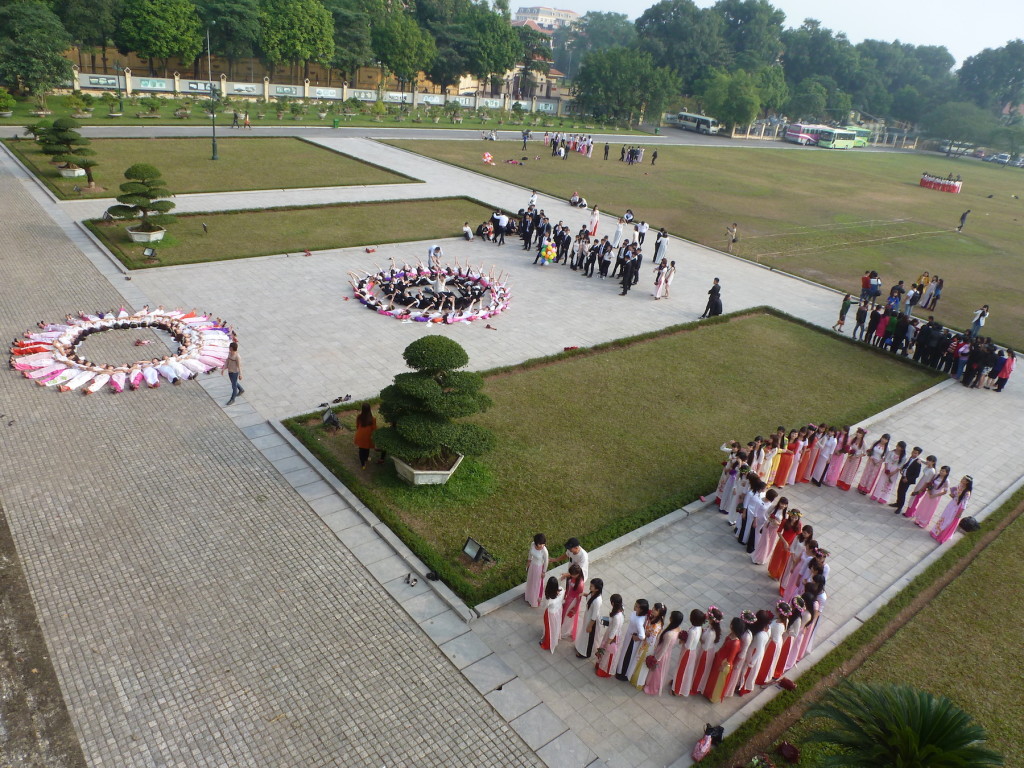 I was quite intrigued with the D67 tunnel and house, built in 1967 and found north of Kinh Thien hall. From 1954 to 1975, the North Vietnamese military command (Vietnam People’s Army) under General Giap, had its underground headquarters here. 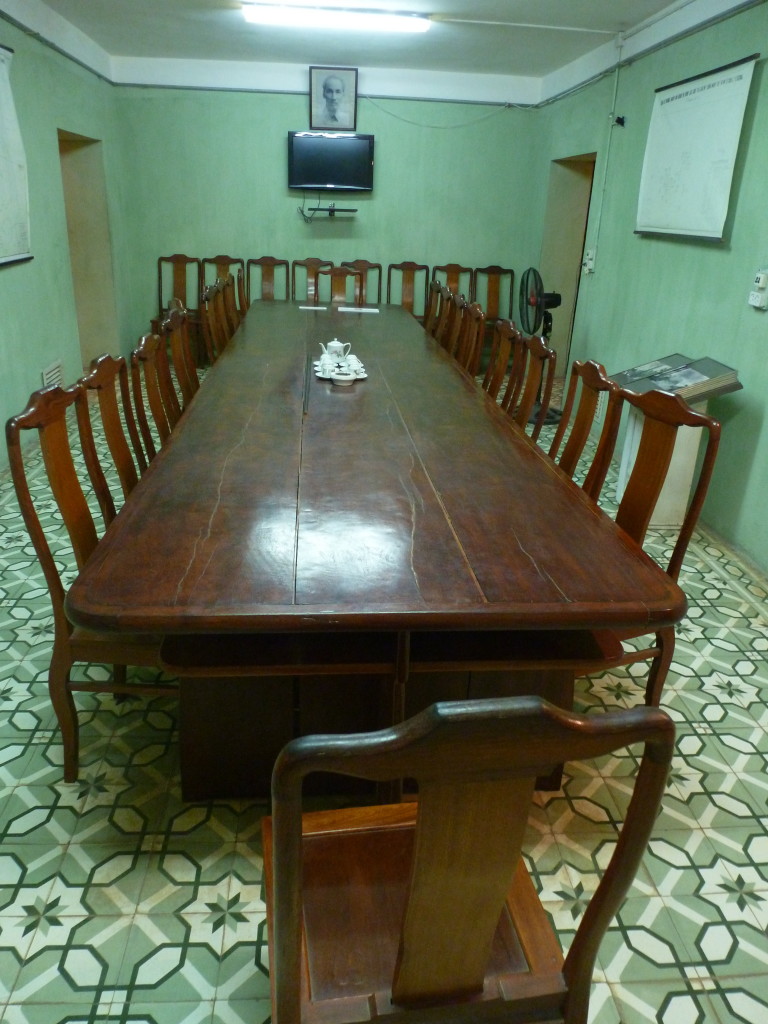 A connecting underground tunnel allowed for emergency evacuation in case of an attack. It was eerie to wander the halls and see the furniture and communications equipment used in the fight against the South and the United States. 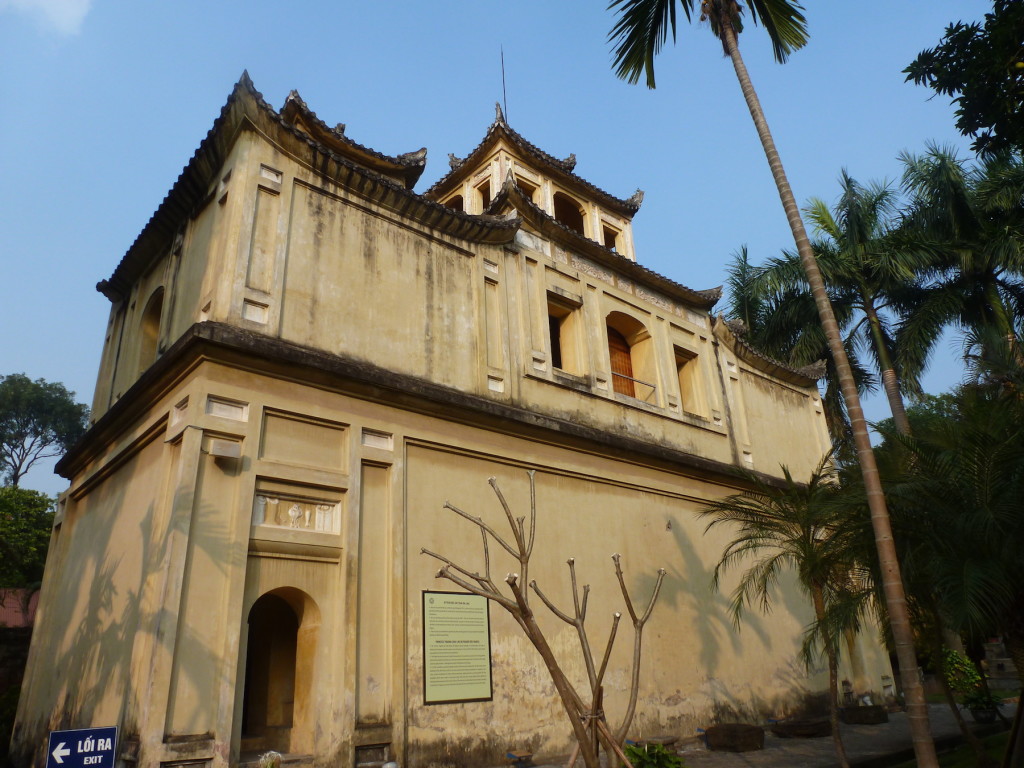 One of the most restful spots in the Citadel is Hau Lau, also known as the Princess’ Palace. Originally built in 1821 during the Nguyen Dynasty for the queen and princess, it was later the residence of imperial concubines. 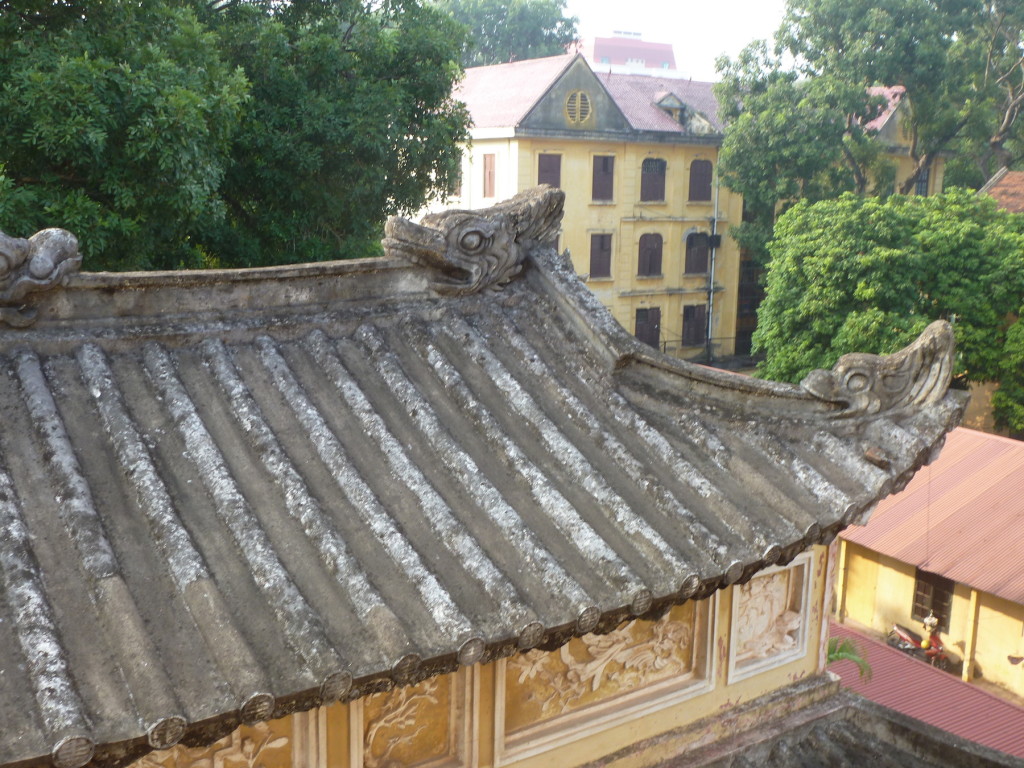 It is a mish mash architectural styles, since the French rebuilt it, but I loved the Vietnamese roof with its crescent-like bladed corners. 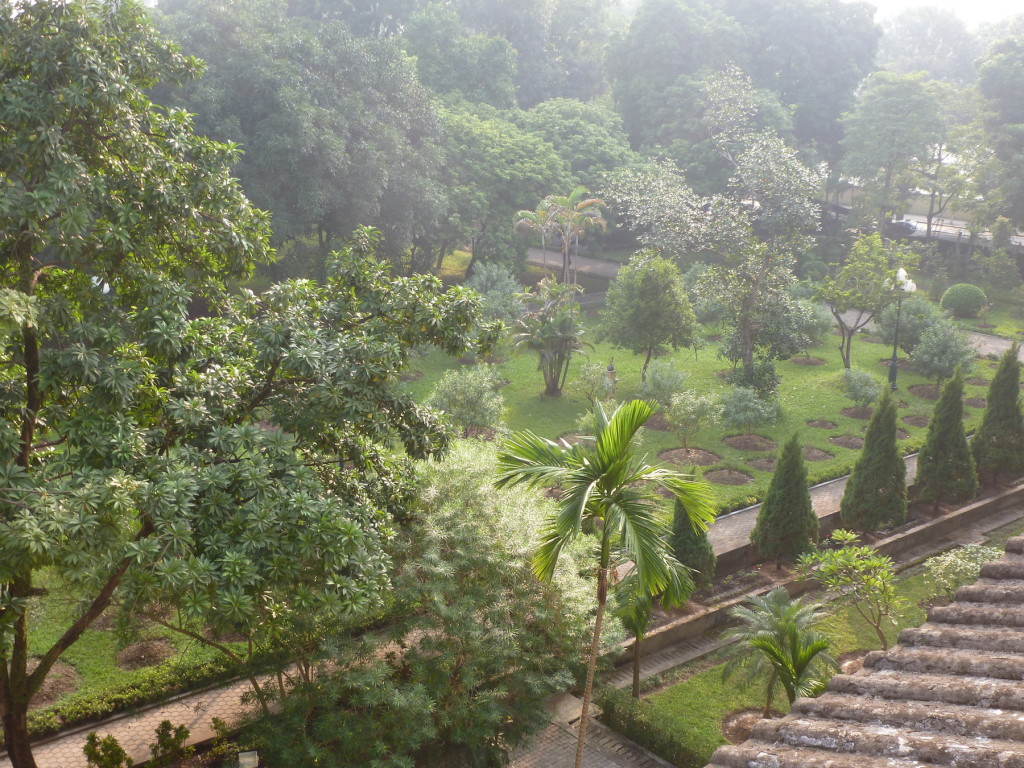 Hardly anyone comes here, so it’s a perfect place to chill and enjoy the gardens.