Posted on November 28, 2018 | Comments Off on AUTHENTIC TENERIFE: Go north for the real Canary Island lifestyle. 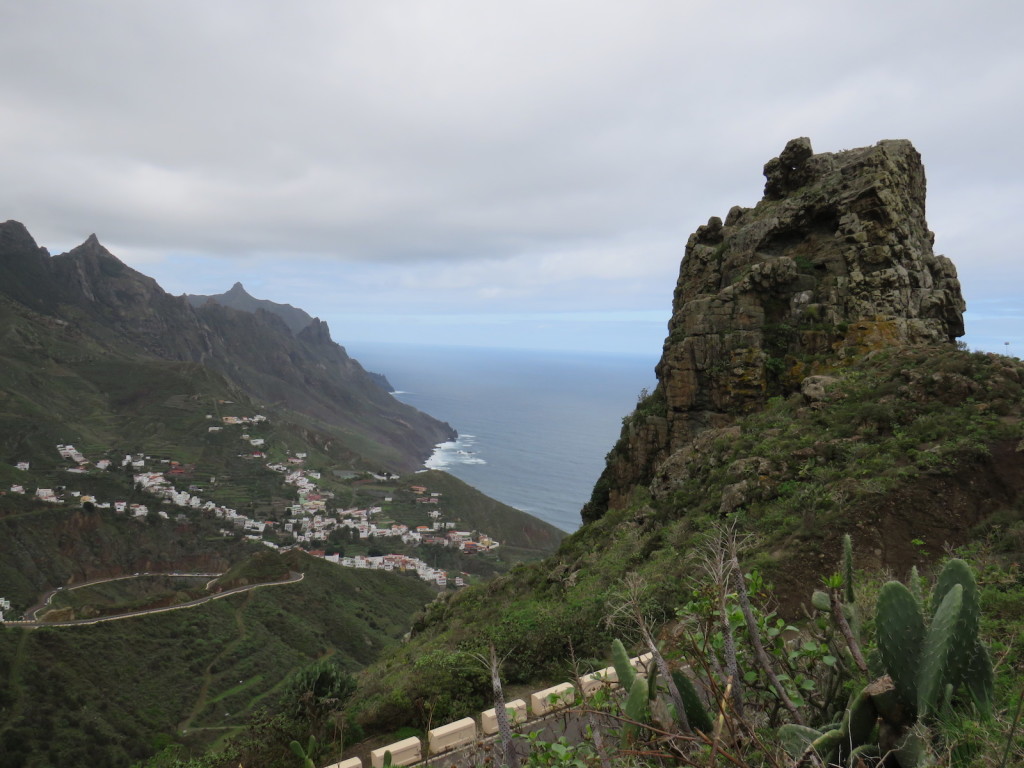 Are there canaries on the Canary Islands? Not the bright yellow types that get hoodwinked into going down coal mines.

The ones that live there are small and brownish as I discovered on a recent trip. How did these humble creatures inspire this group of seven islands off the coast of Africa to be named after them? They didn’t. The Canary Islands were named because when the Spanish arrived in the 1400s, they found the Guanches (the tall, blond first peoples), had these really big dogs. The name was derived from the Latin name Canariae Insulae, meaning “Islands of the Dogs.” I didn’t see any of the dogs, known as Presa Canaria, but my Tenerife guide Cathy Michel showed me a picture on her phone. They are huge mastiffs and have to wear muzzles, but Cathy said she had once owned one and he was a gentle giant. 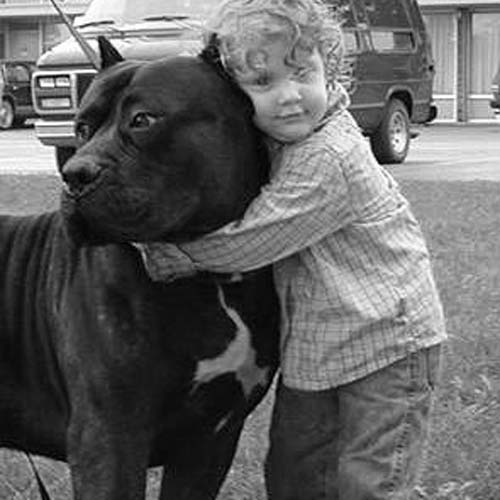 Here’s a shot I lifted from the Internet, credited to the American Kennel Club. Although the Guanches died out, Cathy noted “all Canary Island have a little of their blood in them.”
Tenerife is a volcanic island (321 volcanos, but only one active) with a year round average temperature of 23ºC. It has an area of 1056 sq. km, is 250 km in circumference and has a population of 900,000 that swells to almost six million with the tourist influx every winter. In the mid ‘70s the government wanted to jump-start the economy and started offering package tours from the UK to the south of the island, known for its beaches and hotter weather. The Brits bought in big time, and still do. However, there is a move afoot to draw tourists to the more “authentic” northern end of the island where the majority of the Canarian population lives. 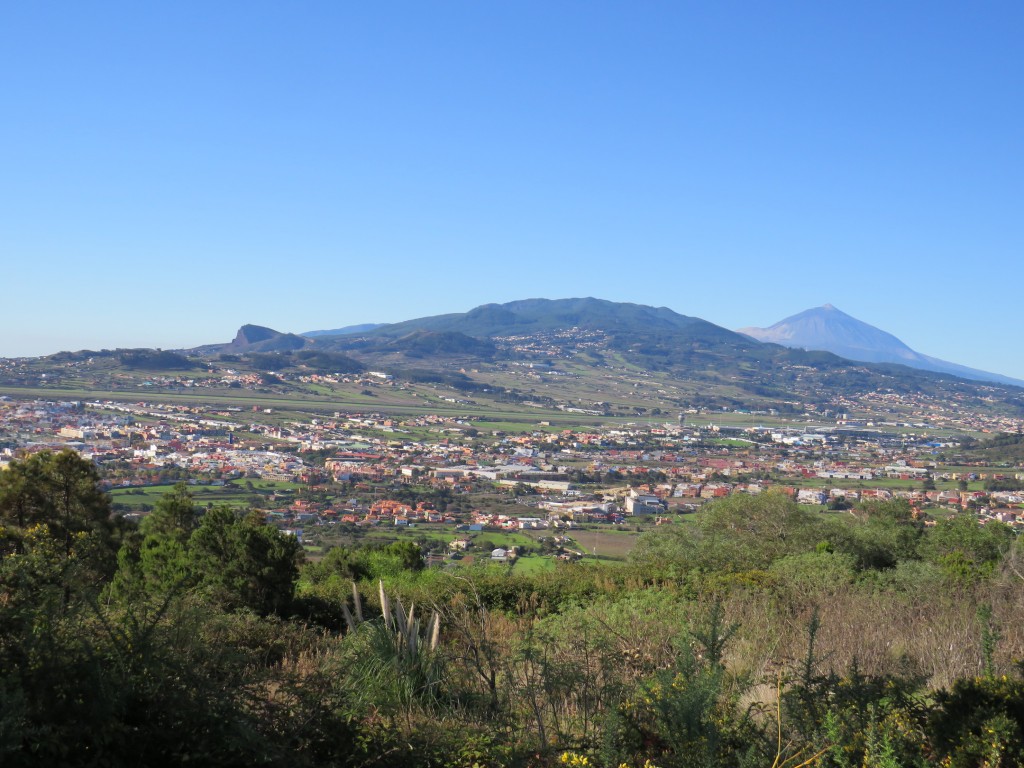 I wanted to explore the authentic side of the island so I stuck to the north where the rocky landscape was layered with terraced farms, wineries, and hiking and biking trails. 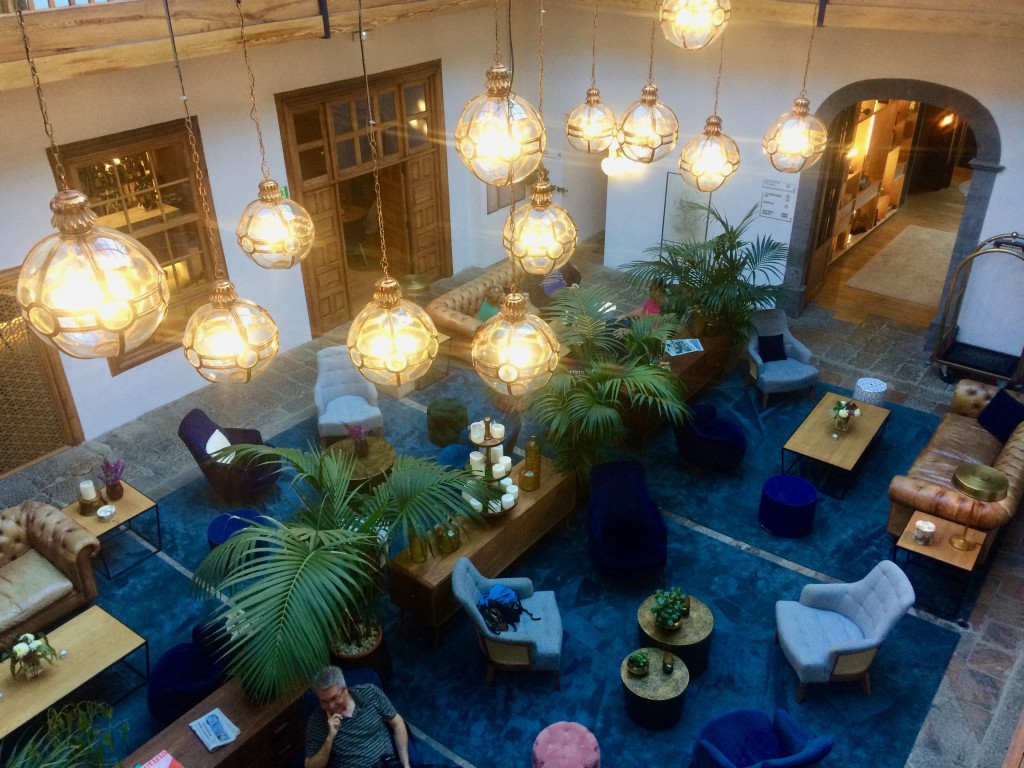 Home base was the La Laguna Gran Hotel, in La Laguna, a town of 125,000 that was named capital of the island when the Spanish came in 1496. (In 1823 Santa Cruz became the capital because it was a port town.) At 550 meters above sea level, the town was seven km from the coast, and dotted with majestic buildings that once belonged to nobility but now are mostly government offices. 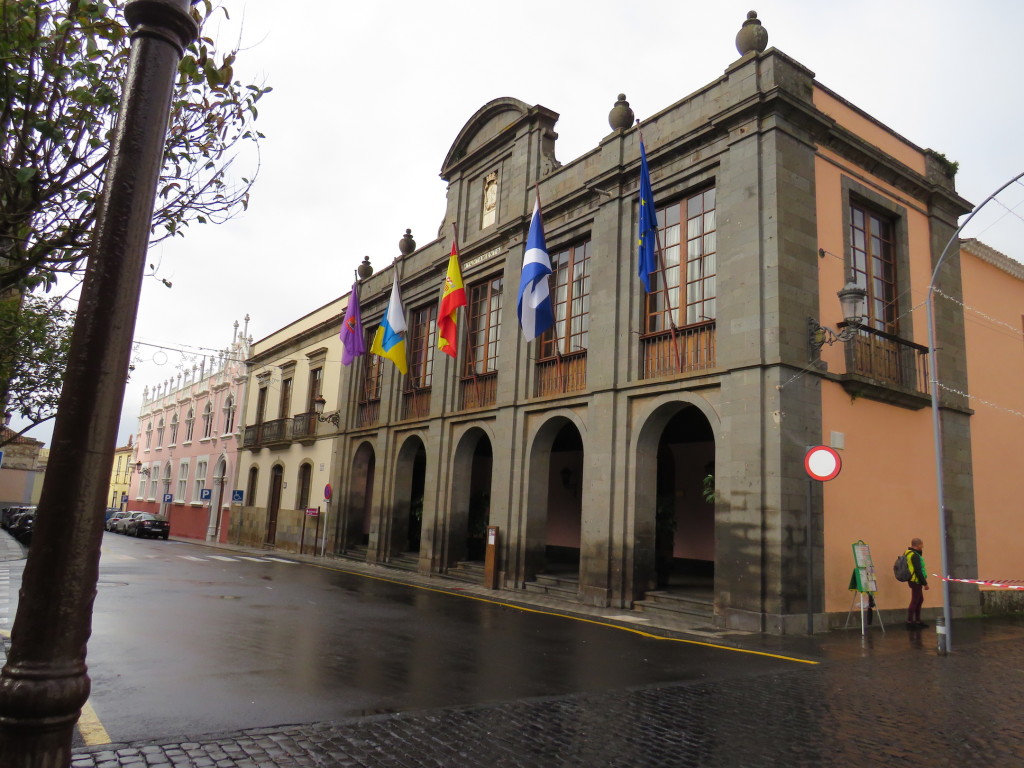 Cathy told me to look for crowns embedded the crests above front entrances. “That signifies royalty,” she explained. Unusual for a volcanic island, this town was flat. It was named a World Heritage UNESCO site in 1999, boasted a university, cathedral and 16th-18th century houses with balconies made of tough, weather-resistant Canarian pine.
I was fascinated with the town’s convent of Santa Catalina de Siena where 19 nuns lived. 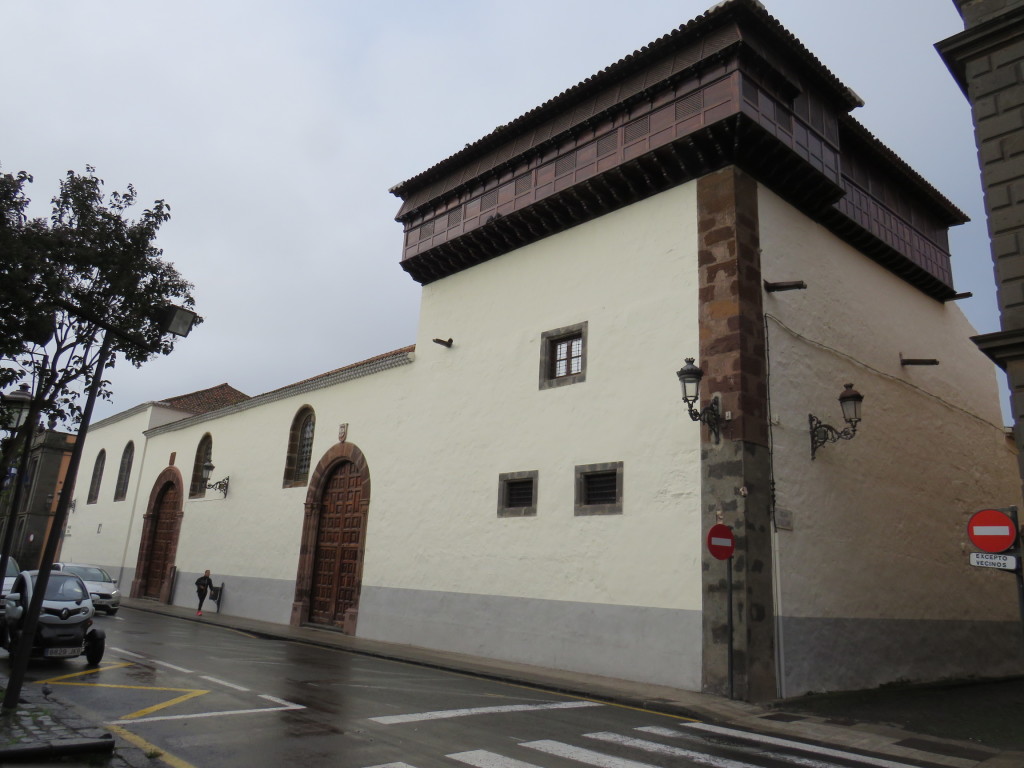 A city block in size with a vegetable garden and courtyard, it had screened wooden balconies on one corner so the nuns could see the rest of the world (they never go out). Home to the mummified body of Maria de Jesus de Leon y Delgado, a nun from the 17th century, the convent is open one day a year (Feb. 15) so the public can pay their respects to her.
Around the corner, I discovered “La Catedral” Dulcerio y Panaderia. 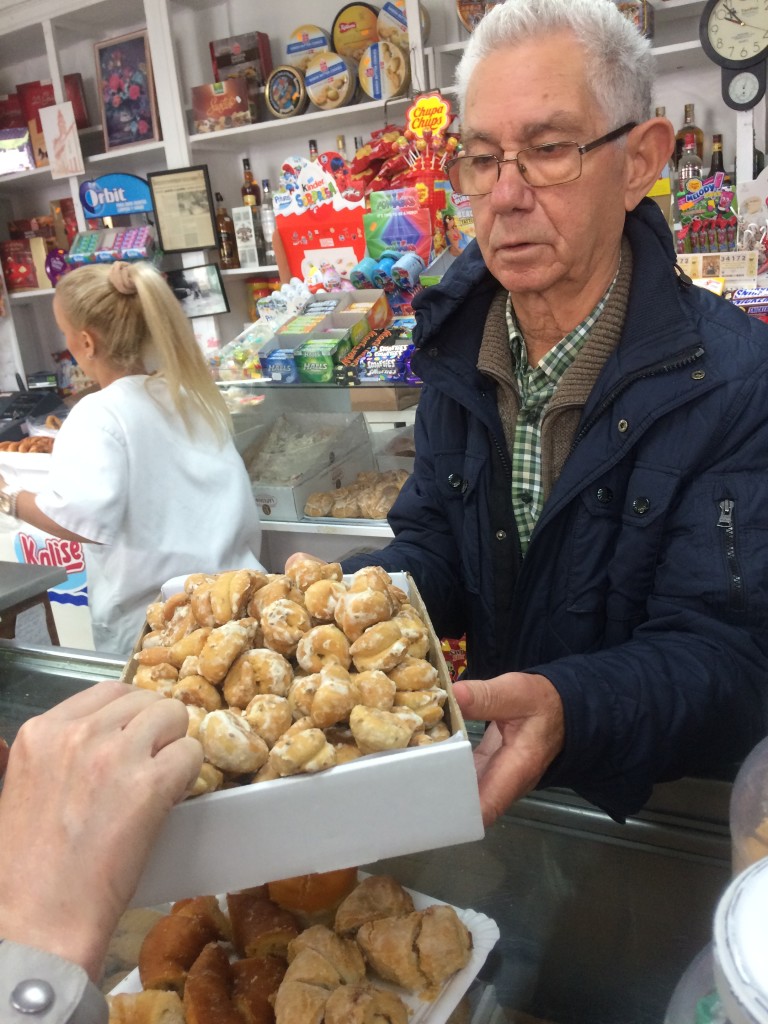 Owner Maria del Carmen Hernandez told me it had been in his family for 104 years. The sweet, flaky pastries were stuffed with various fruits and even a squash that when cooked down is known as “angel’s hair.”
The town’s cathedral was not that old, Cathy told me. 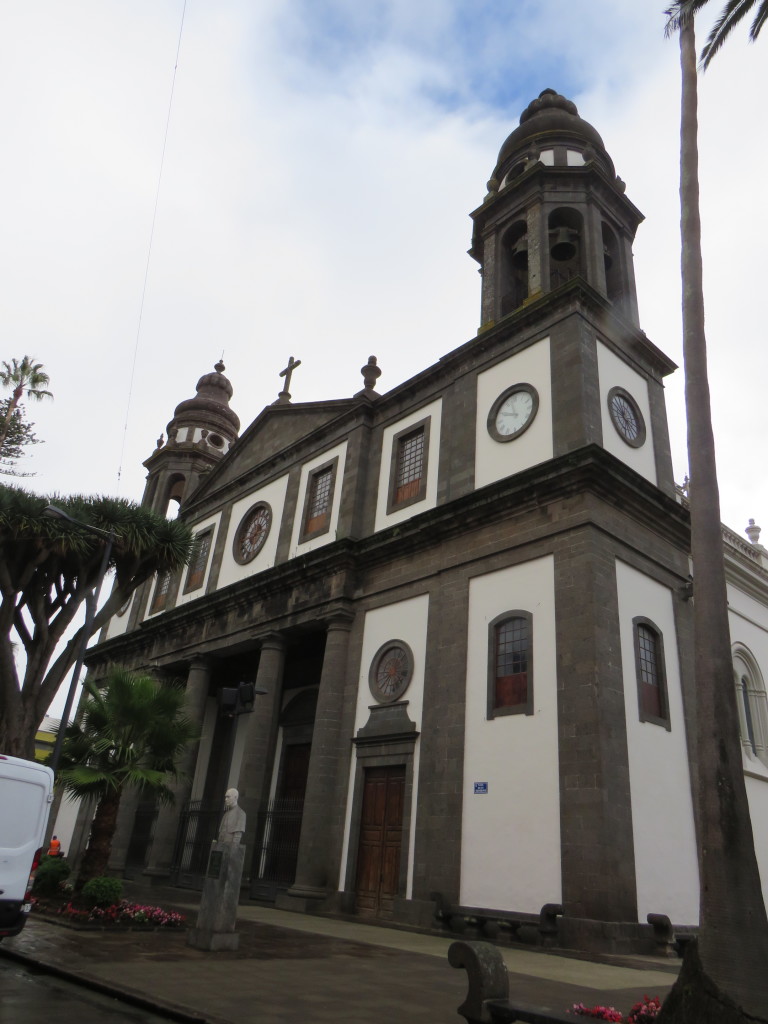 “It’s the same design as the one in Pamplona. The concrete roof caved in and they had to rebuild it a year ago.”
At the north-eastern tip of the island I found myself in Anaga Rural Park, where I could literally look down upon a sea of clouds. 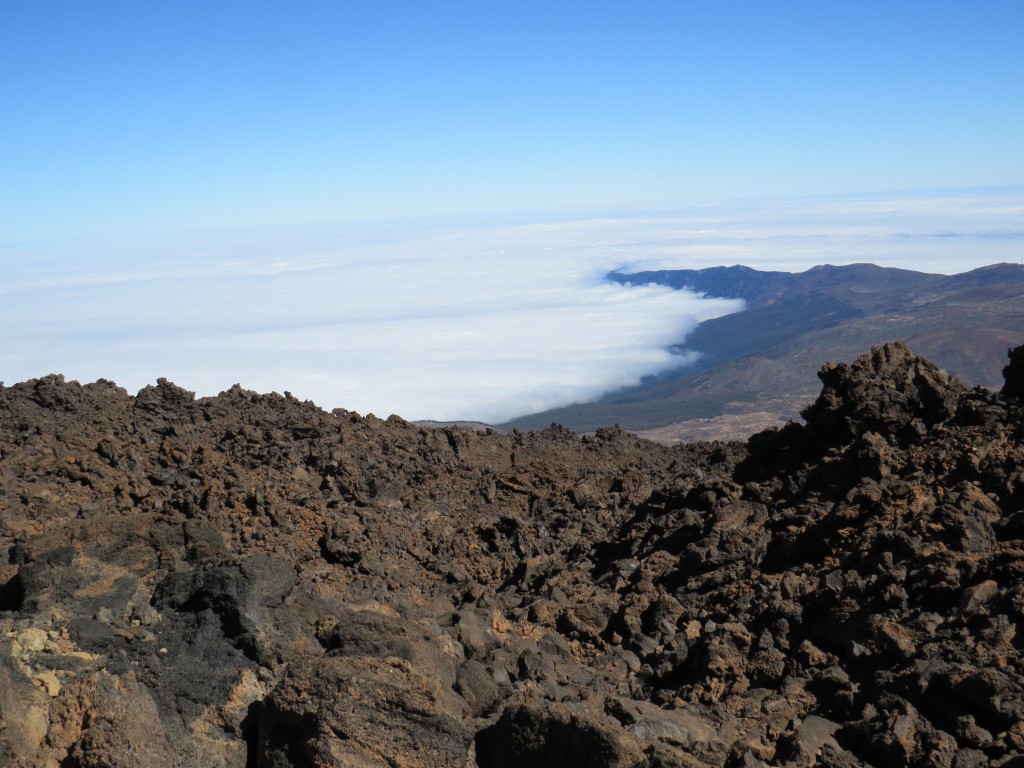 It took my breath away. The forest was full of plants whose seeds had blown there on the trade winds from the Mediterranean. It was raining slightly and water dripped from the laurel leaves, soaking the earth. 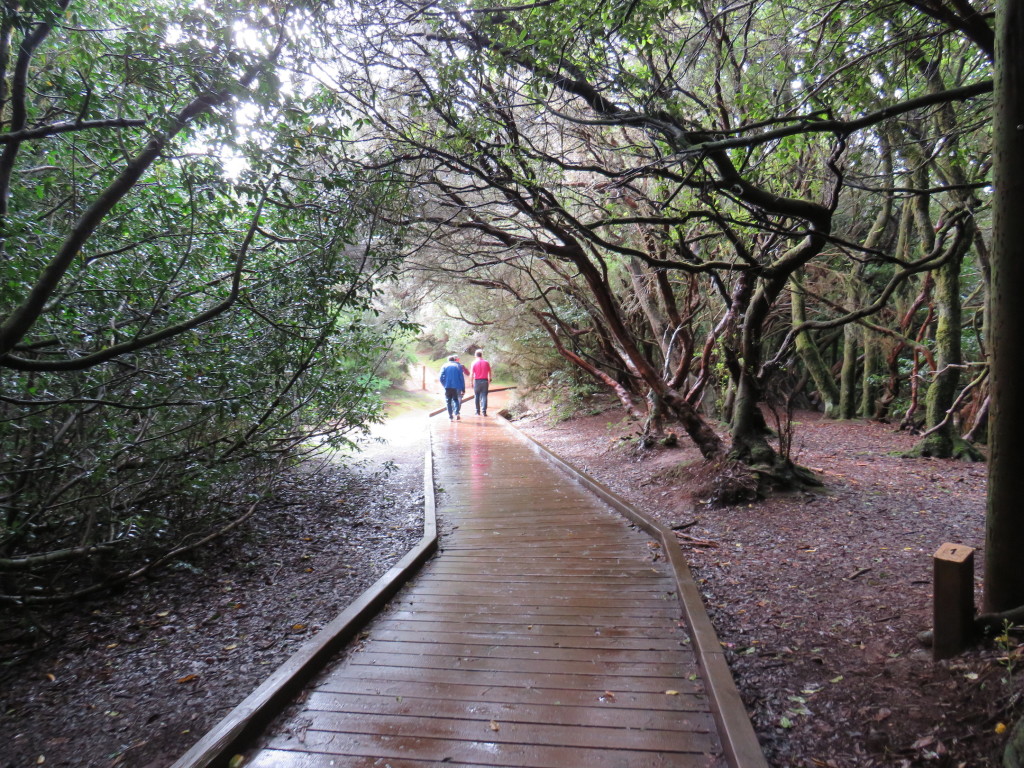 The humidity of this region is what irrigated the farms below, Cathy told me. “They capture the water and use for crops, especially bananas.” At the visitor’s welcome centre, we watched a video describing this island of 321 volcanos “a biosphere where a magical sea of clouds tangles with the trees.” I learned of the island’s famous wine, goat cheese, dragon trees, palms and junipers. A local guide, Pedro Mederos, explained, “In Anaga, the highest mountain is around 1,000 meters. On the way up, you can see the plants change. In the lower areas, live rabbits, partridges, and Paloma pigeons. The locals hunt the rabbits and partridges for food.”
Next, we drove to Chinamada to see the caserias, or cave houses. 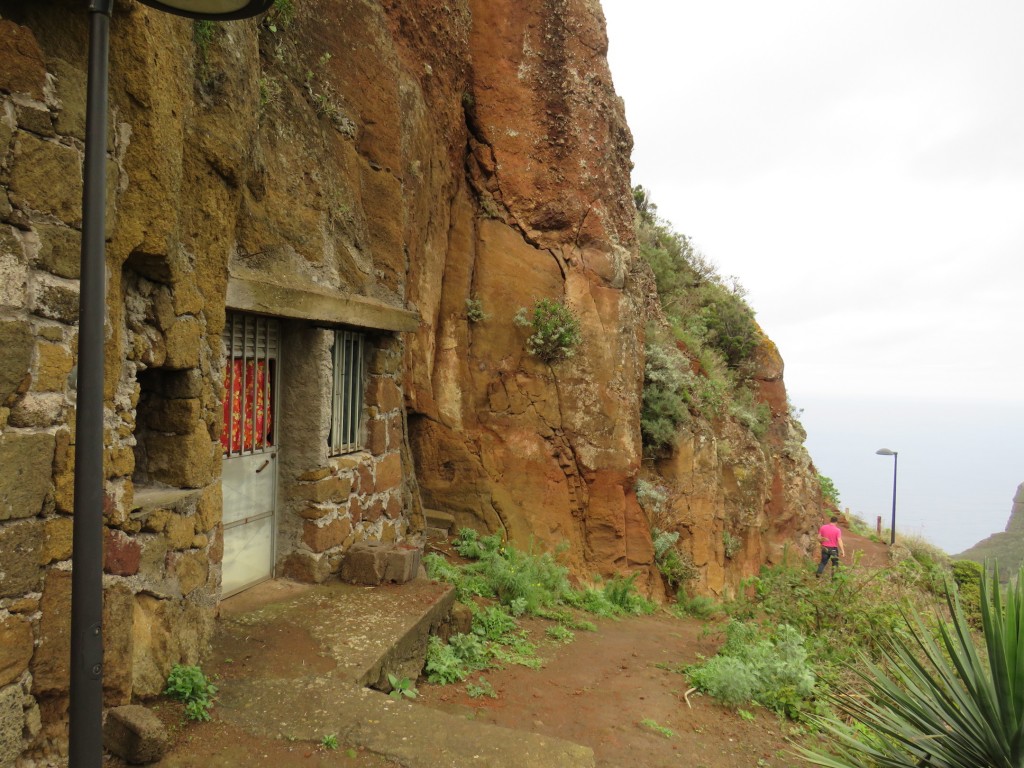 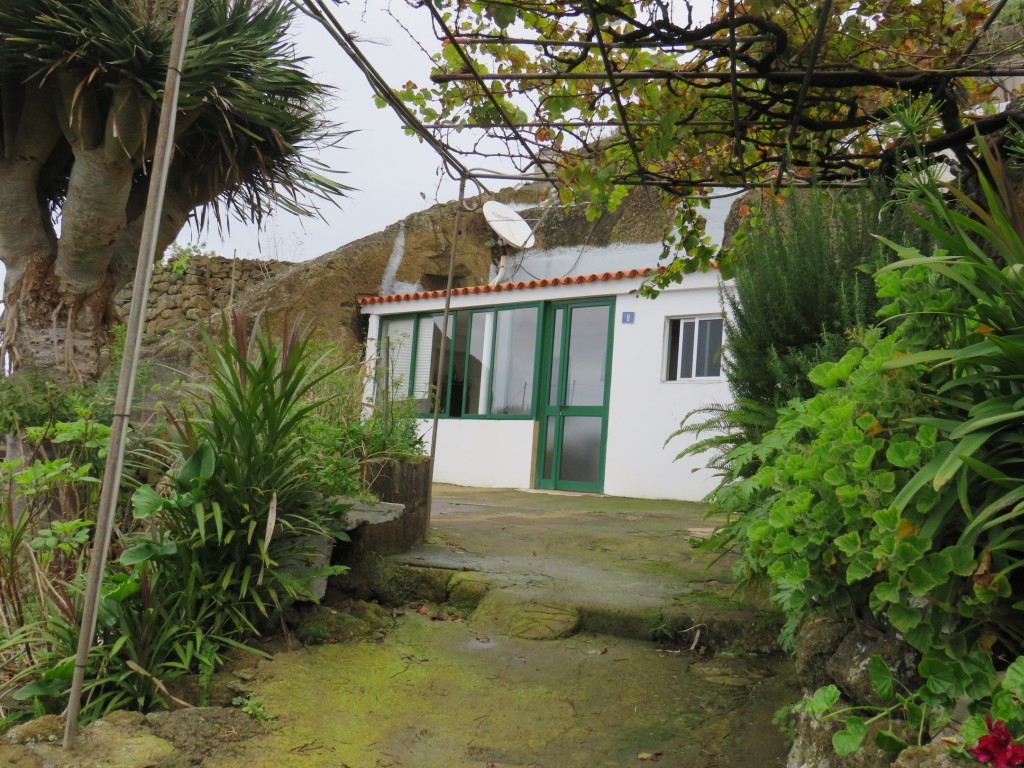 Walking along the cliff side, we can to a little home carved into the stone. A man waved us over and took us inside to listen to him playing what looked like a little ukulele. 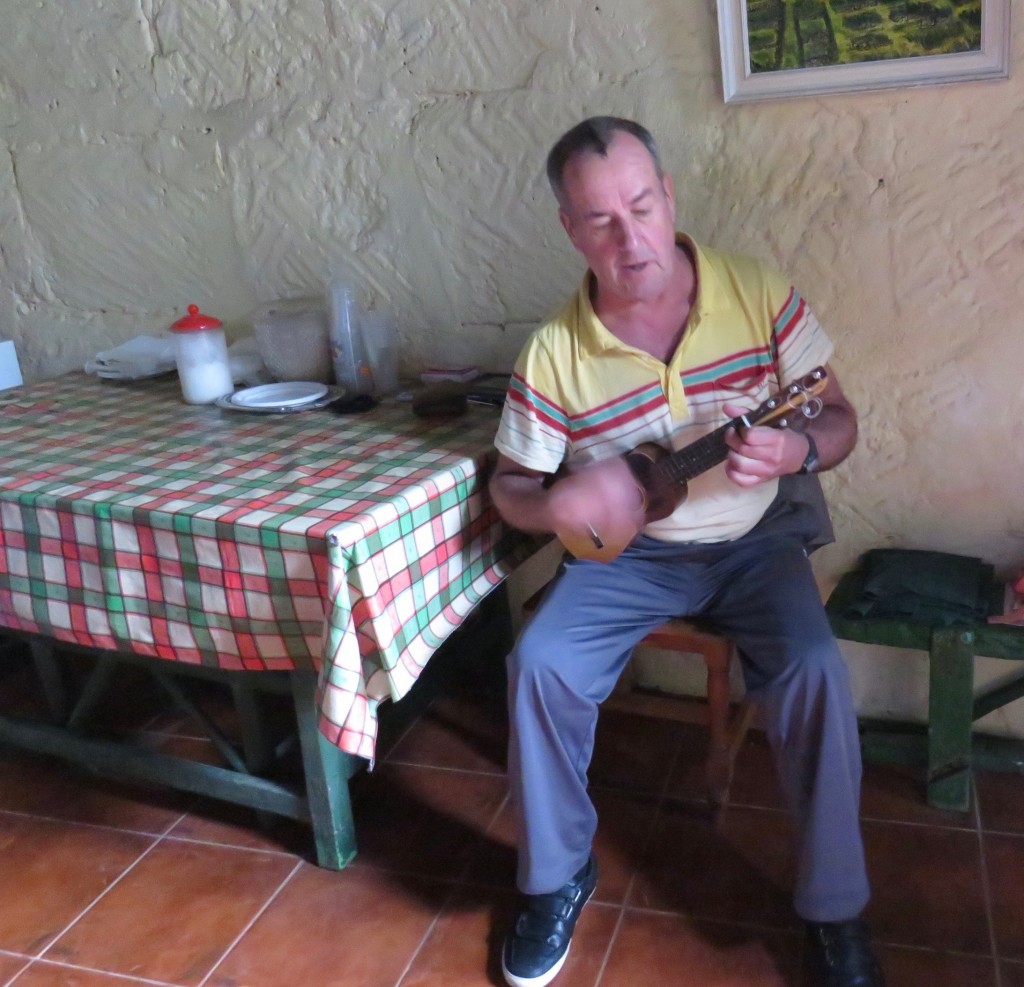 “I’m playing a timple, I learned from my father who loved folksongs,” he told us. Valentine Ramos Ramos explained that he was born in this house in 1962. “I was named after St. Valentines because I was born on that day.”
Lunch was in Taganana, known as the village at the end of the world. Why? It’s near the end of the coastal road in Anaga. 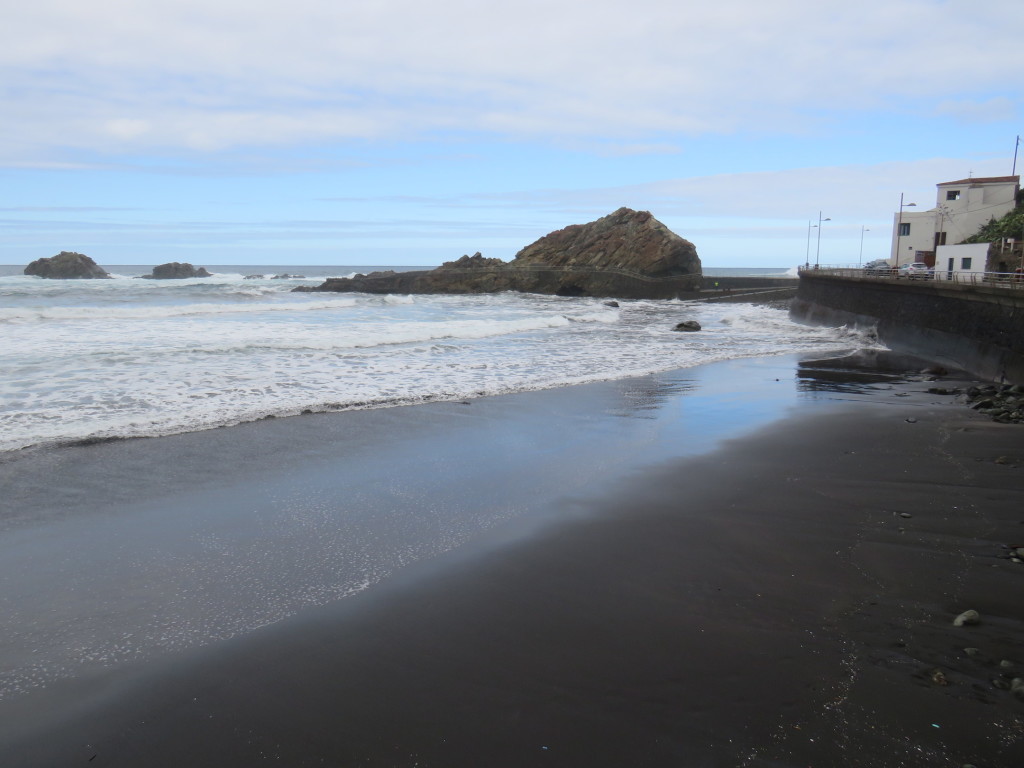 Note the colour of the beach…black sand.At the beach front restaurant Casa Africa. we dug into fresh fish, potatoes and salad. Next was San Andres and Las Teresitas Beach. 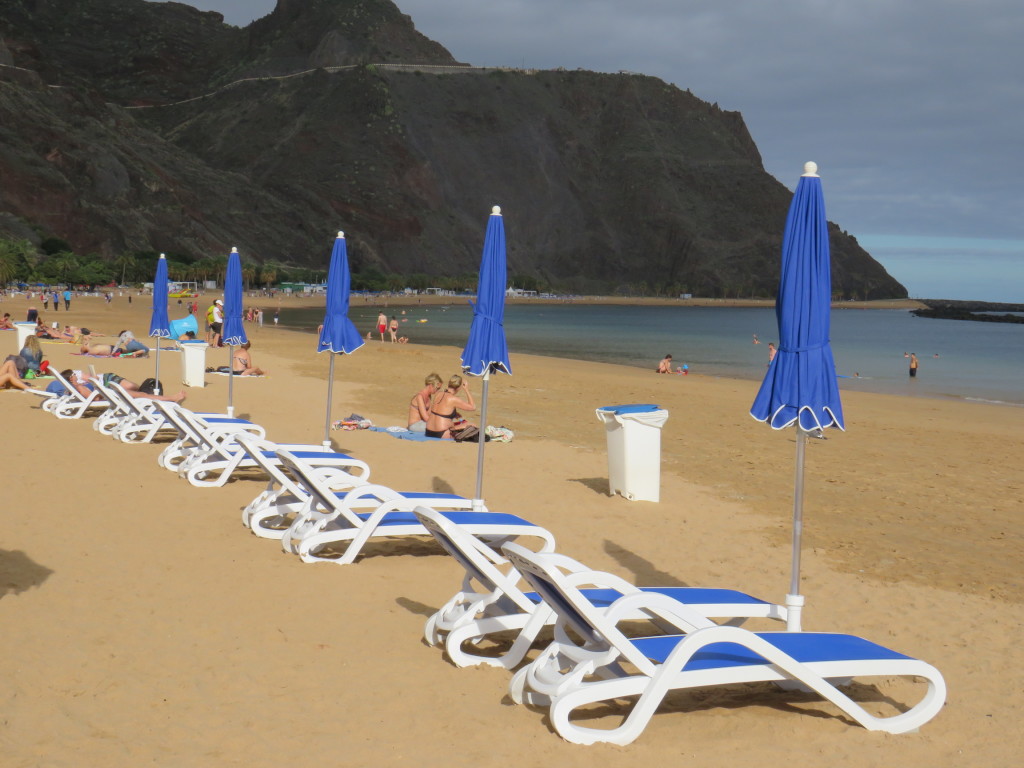 “The sand at this beach used to be black from the volcanic rock, but the government had gold sand brought in from the Sahara (when it was the property of Spain) because the black sand grew too hot in the sun and burned your feet,” Cathy said.
Santa Cruz, Tenerife’s capital, was founded in 1825 and with its population of 250,000 it is the largest city in the North. 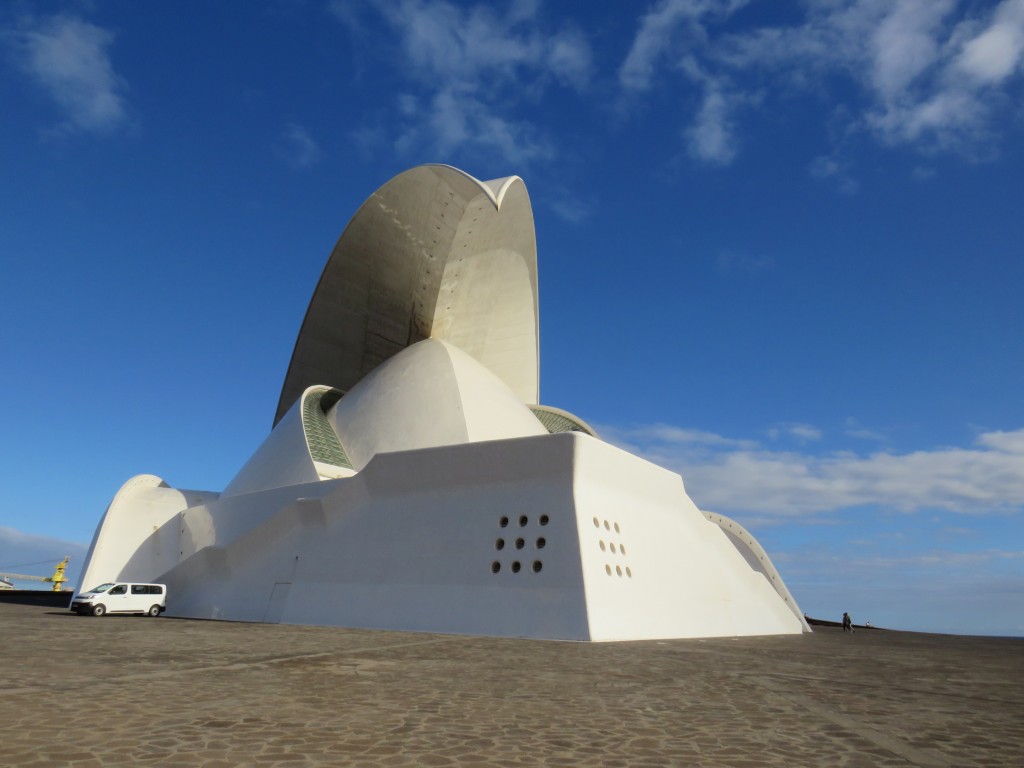 Perhaps its most famous structure is the Auditorio de Tenerife, designed by architect Santiago Calatrava and completed in 2003. He also designed salt water swimming pools by the ocean. “The residents were not too happy at first since it cost millions. They would have preferred the money to be spent on schools,” explained Cathy. And yet, it was beautiful, and many people were enjoying the water view from it’s beautifully designed cafe.
One of Santa Cruz’s newest attractions is La Casa Carnaval, the Carnival Museum. Walking into the building, the first thing I set my eyes on was the Queen’s costume from 2018. 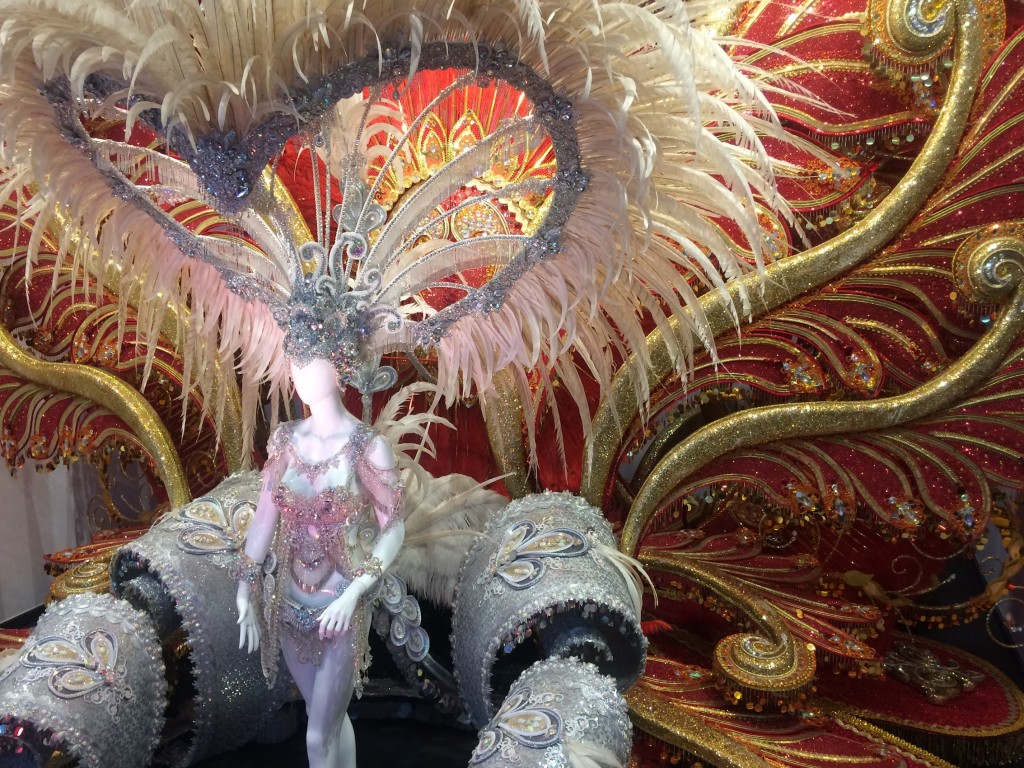 An astounding assemblage of red and gold, glitter, feathers and absolute fabulousness, I discovered it had wheels underneath. “The costume weights 360 kilos. The Queen must walk into her costume, then she is crowned with the 11 kilo headpiece,” Miriam, my museum guide explained.
Every year a queen, granny and girl child (girls 5-8 years) are elected. There is even a Reina Infantil del Carnaval, who makes sarcastic political statements. Just about every Canarian is involved with a murgas, or themed group that spends all year devising their costumes. Bands are made of mock instruments fitted with kazoos and the characters that are seen every year include Michael Jackson, Johnny Depp’s Pirate of the Caribbean, Miss Piggy, Fidel Castro, Groucho Marx…and Canadian Mounties! 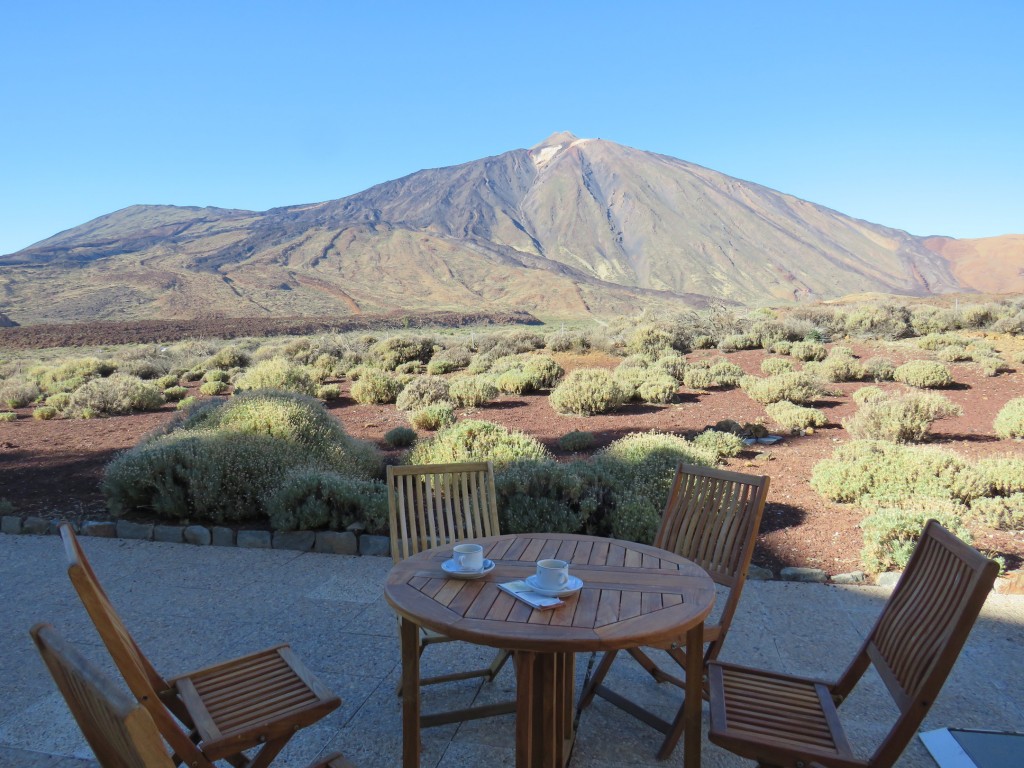 In the center of the island is Teide National Park, where you can climb Spain’s highest peak, Mt. Tiede (or take the cable car, like me). 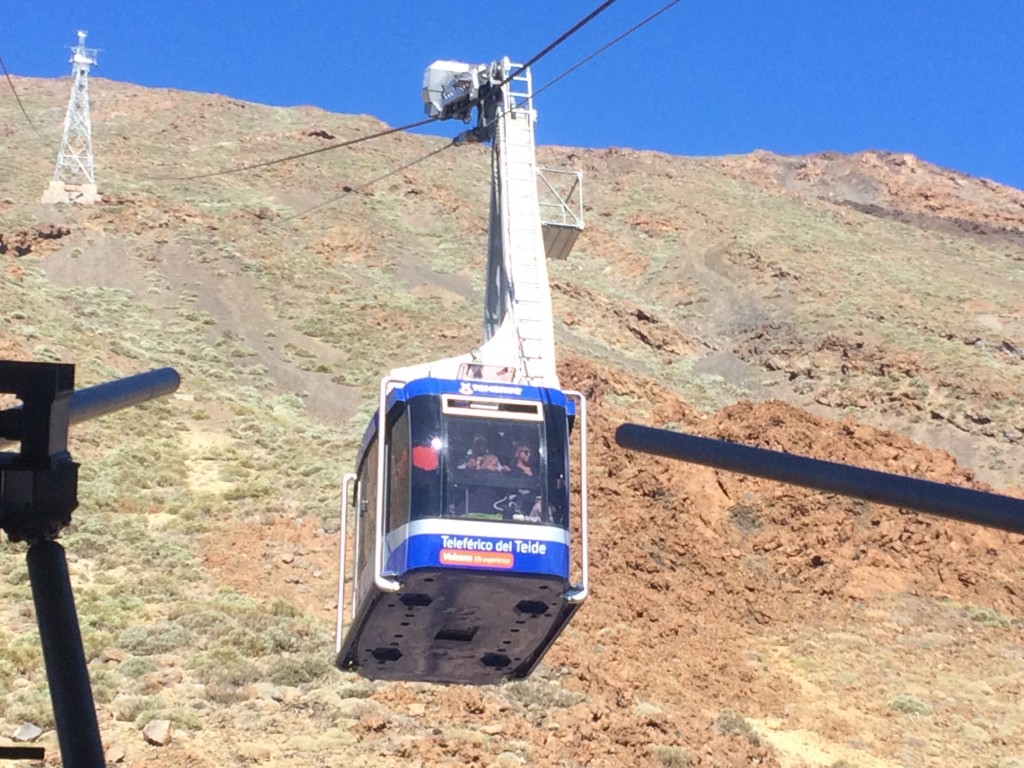 Volcanic lava chunks from the 3000-meter-high mountain were scattered about everywhere, giving the area an almost surface-of-the-moon appearance. This is a popular destination and gets almost three million visitors a year. If you opt to climb the final summit, which takes around 45 minutes from the top of the cable car you have to book in advance. They only let 200 people go up a day, 50 per hour. Go from the lower car park and you don’t need a reservation, just four hours to go up and four to go down.
Down the road from the cable car was Parador de las Cañadas del Teide. Open year round, the hotel offers guests a stargazing program since the area’s dark skies have made it one of the top astronomy locations in the world. 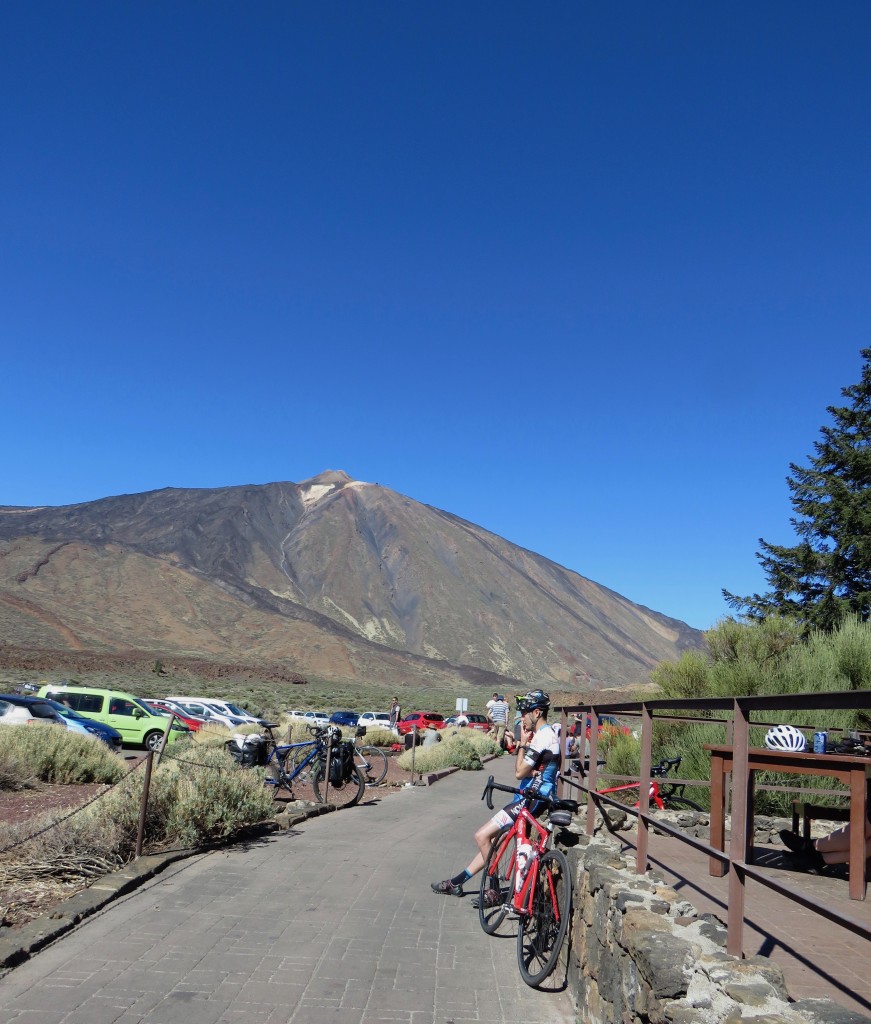 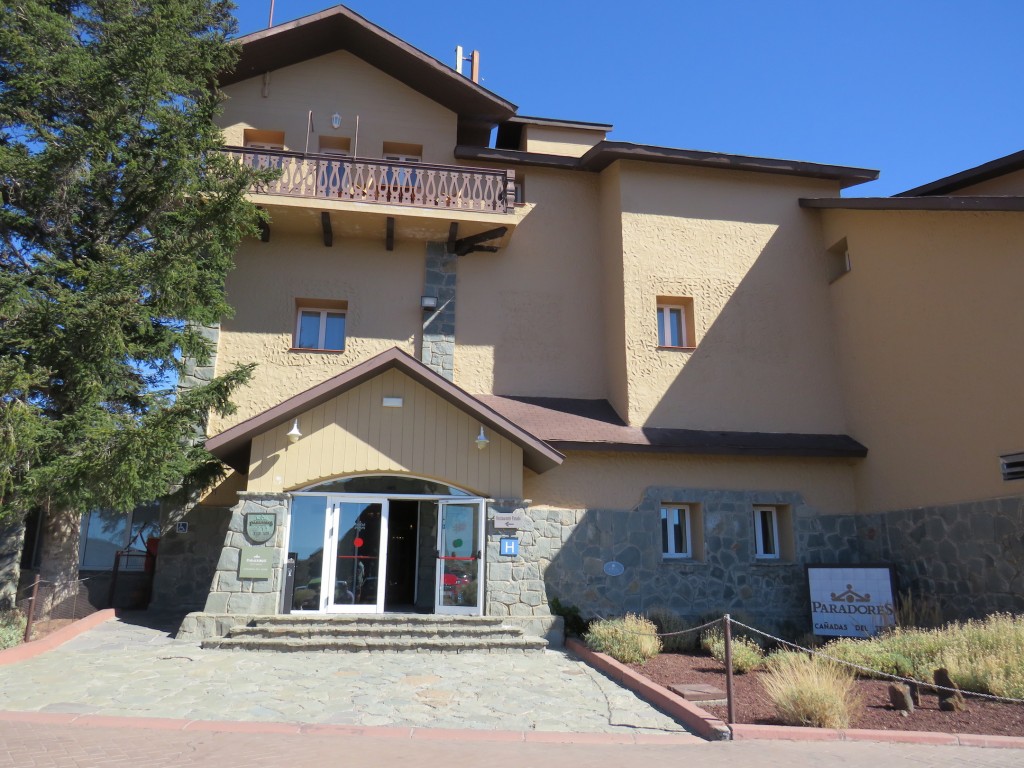 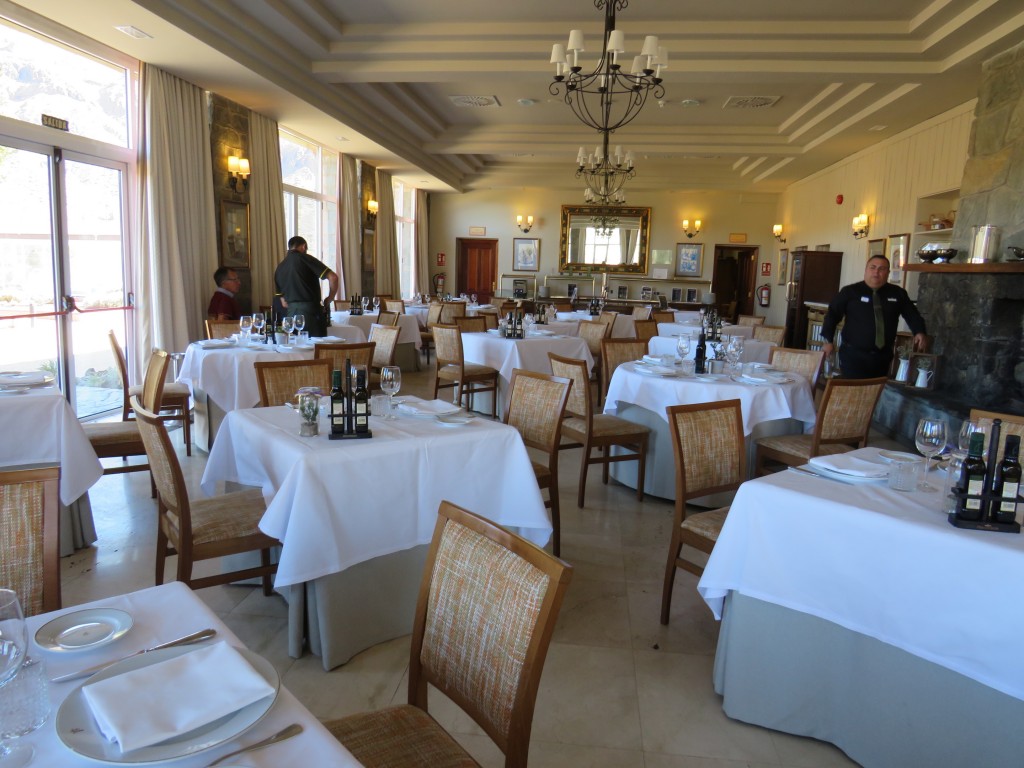 The 37-room property is popular with cyclists who use the area for high-altitude training. “Lance Armstrong came here for five years to train. And British cyclist Chris Froome stayed here. Guests like the location and food,” explained Alejandro Garcia Valerio, the hotel’s director. Heading to the dining room, I learned that goat and rabbit were the most popular signature dishes. 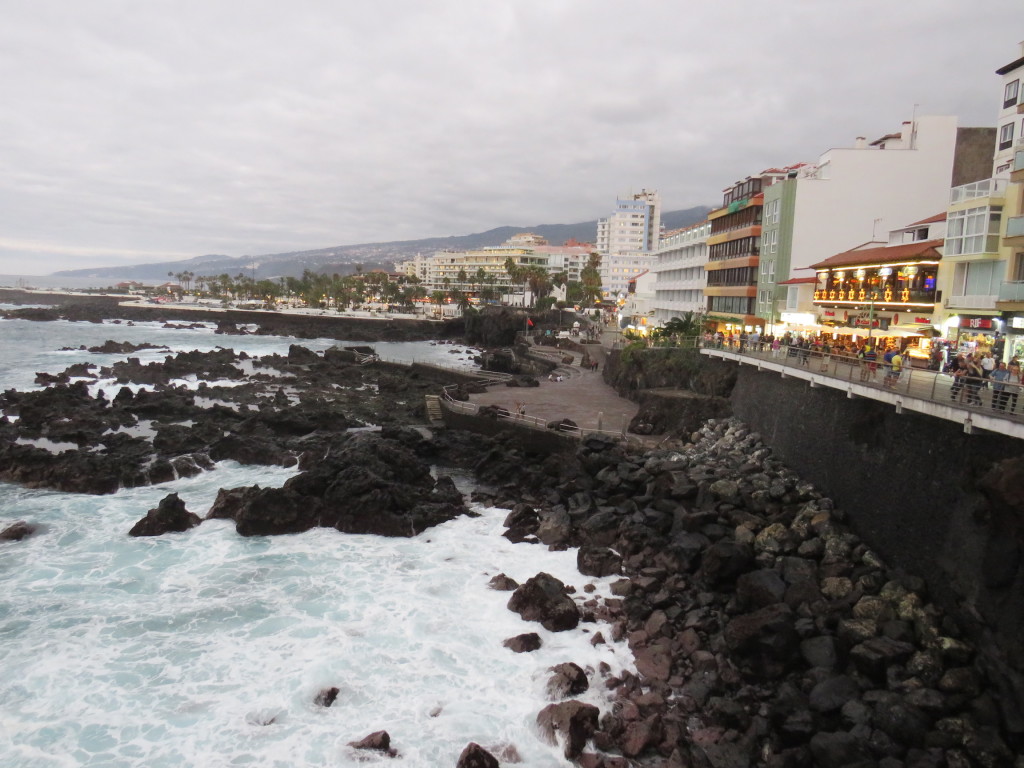 In Puerto de la Cruz, I joined the crowds and walked along the sea wall, then headed to Plaza del Charco to people watch and sip a delicious barraquito coffee (Licor 43, sweetened condensed milk, steamed milk, and espresso) at one of the square’s many cafes.
Tenerife is covered with spikey odd trees that are not really trees, but a sort of cactus-like plant called Dragon Trees. 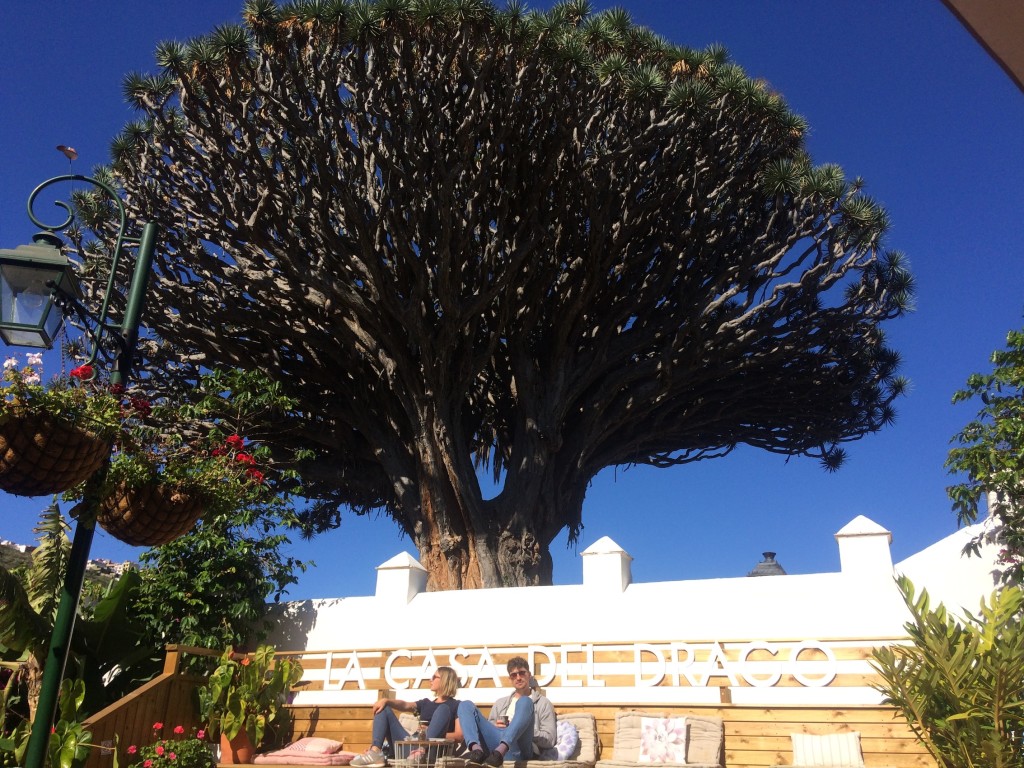 In Icod de los Vinos I saw the island’s 500-year-old specimen and tried some of the sweet Drago’s Blood liquor. 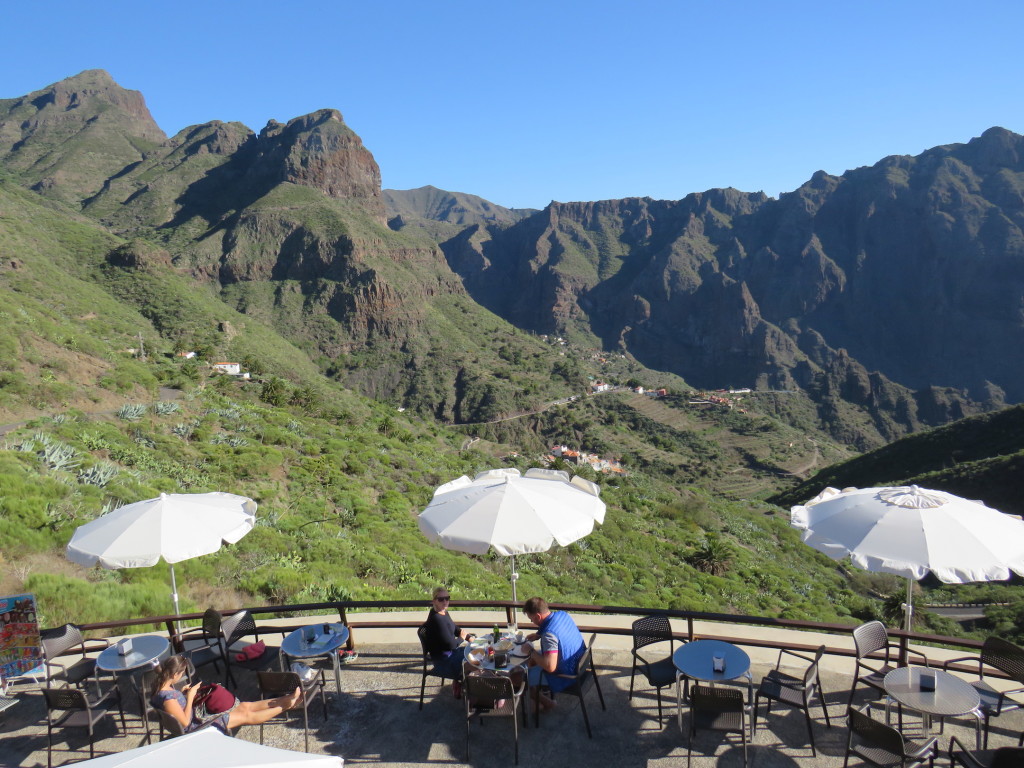 Perhaps one of the most picturesque spots I visited was the hamlet of Masca. Winding pathways took me past mountainside homes looking down on terraced gardens and the blue ocean. 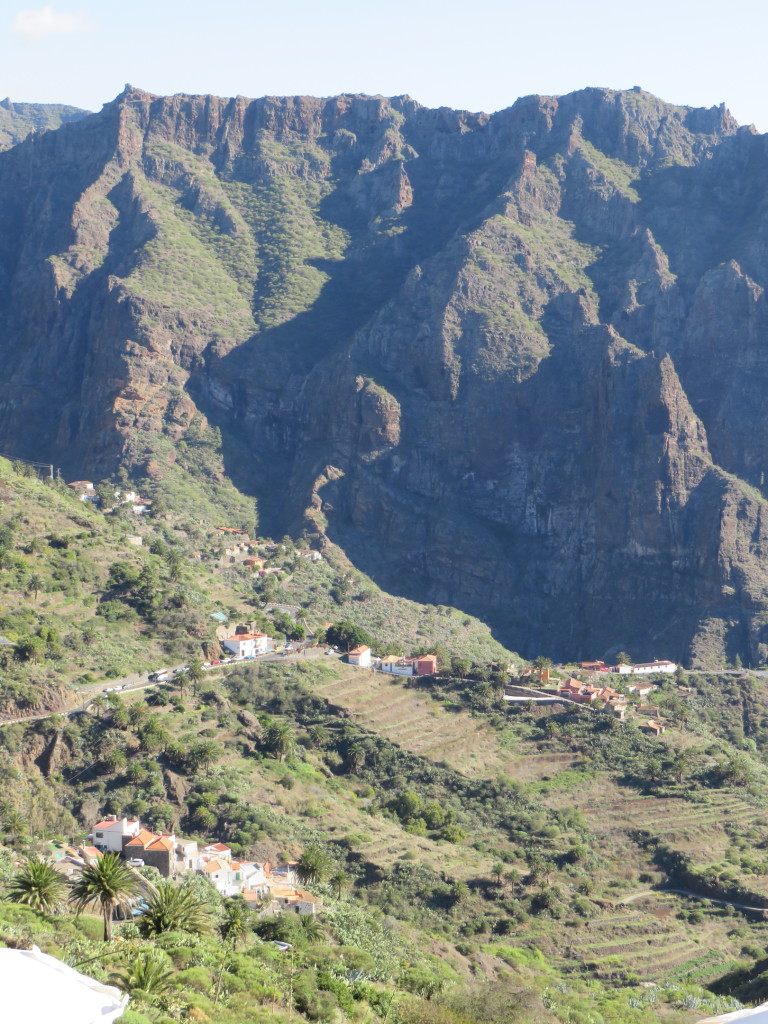 Dinner that night was in Garachico, once the island’s capital. A devastating volcano eruption in 1706 changed that when the harbour was swallowed up. 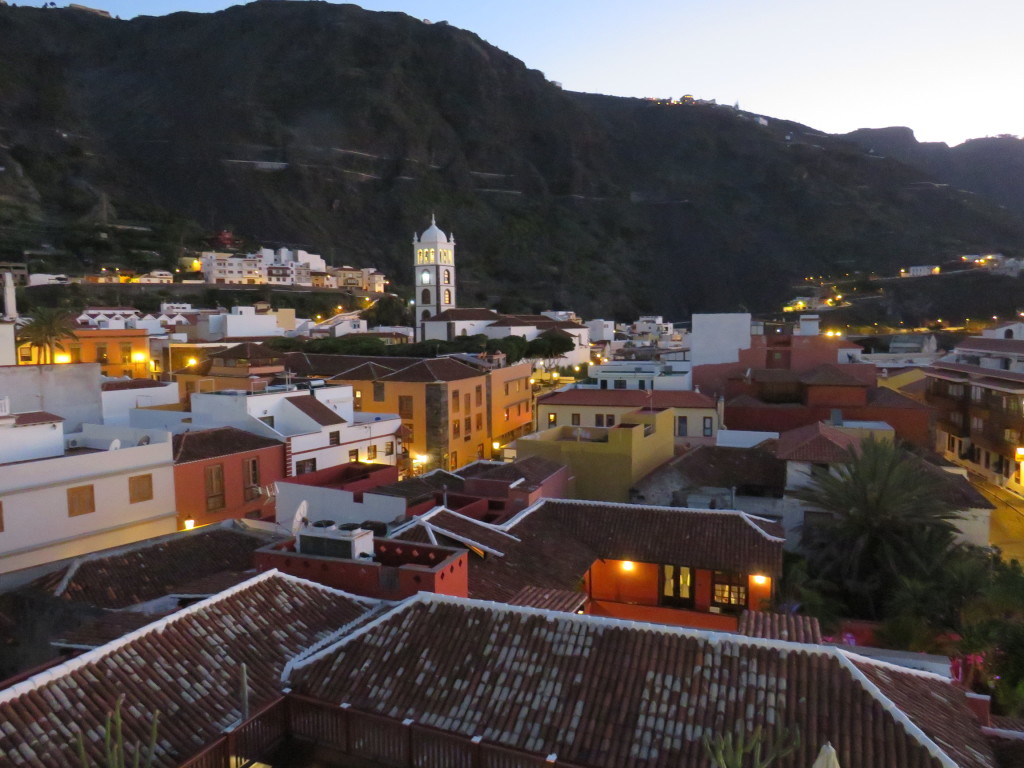 Rebuilt and beautiful, I was charmed by the cobbled streets, churches, and historic buildings. 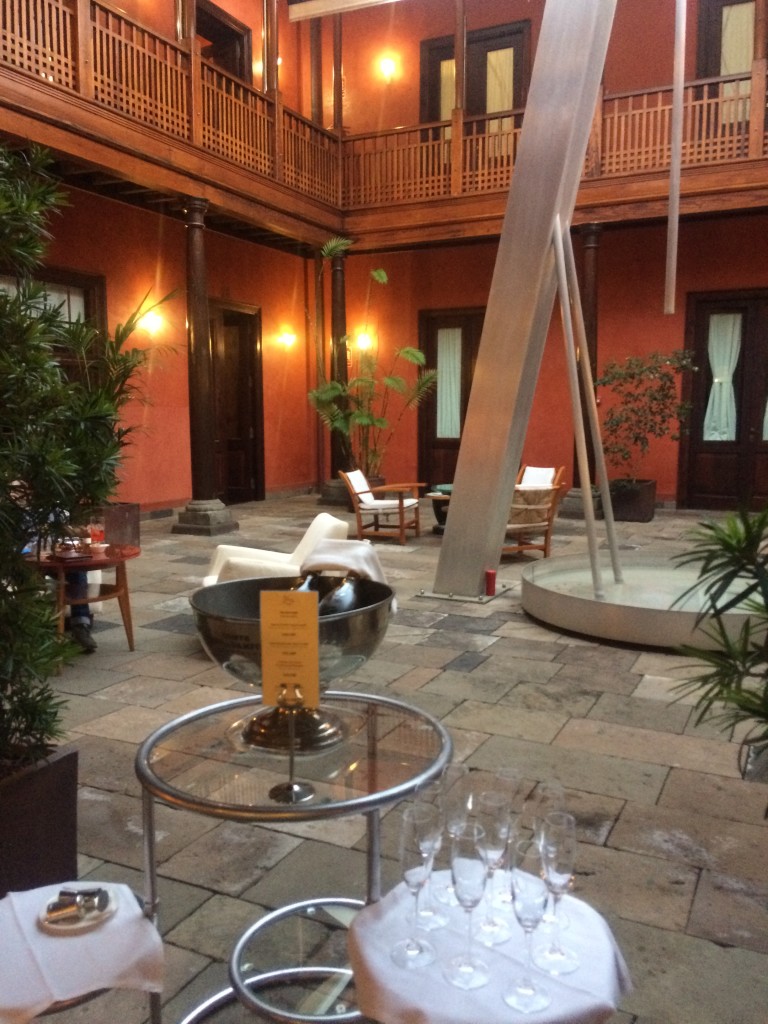 At the boutique San Los Roques hotel, owner Dominic Carayon first took me on a tour of the 17th century building. “It had been abandoned for 10 years and was in bad shape. It took four years to finish the renovations.
Wooden floors, warm colours and art objects could be seen throughout the elegant property and the fine food offered in the hotel’s restaurant Anturium matched the mood perfectly. We nibbled on aged goat cheese, tender wreckfish and finished the meal with a lovely light flan. “In the 1990s, Tenerife just a sun destination. This area was depressed and the population elderly. My family had an incoming travel agency working with Finland, France and Spain,” said Dominic. They knew the tourism business well and after Dominic’s father, who was French, passed away, he and his Spanish mother decided to get into the hotel business. “We were the first to open in Garachico and now there are two more hotels.” Slowly, it seems, tourists are discovering this historic town.
If you are looking for “authentic” Tenerife, stick to the north. Exploring the history, natural beauty and local colour is nourshing for the soul and a far richer experience than simply lounging on the beach.

Comments Off on AUTHENTIC TENERIFE: Go north for the real Canary Island lifestyle.