Posted on October 31, 2018 | Comments Off on Civil Rights Champions of Nashville 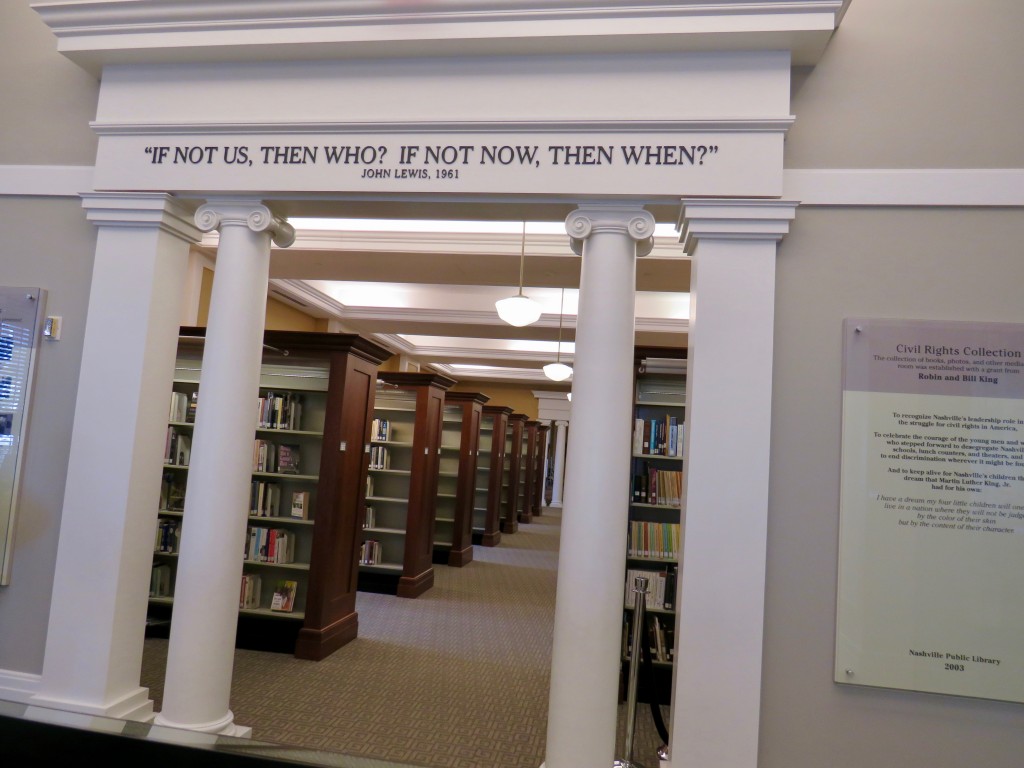 Nashville, I recently learned, is not only about country music. Walking along Fifth Avenue North downtown, I came upon a plaque explaining how one of the original “five and dime” stores, F.W. Woolworth became the site of some of the first lunch counter sit-ins during the 1960s Civil Rights Movement. 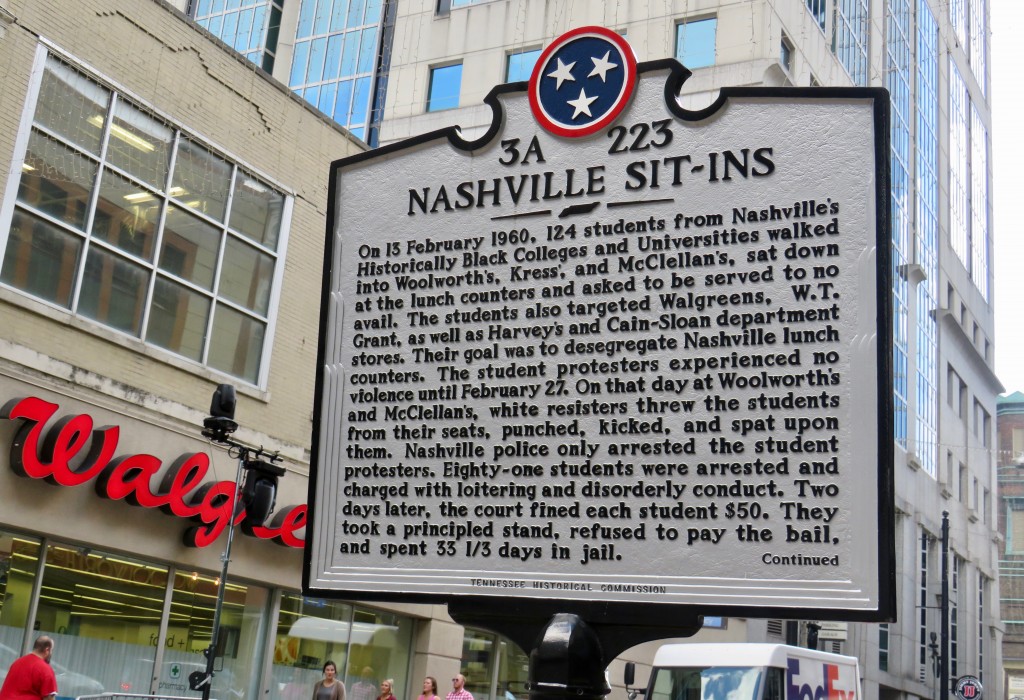 A stop on the Civil Rights Trail, this was the first city in the south to begin the desegregation process. 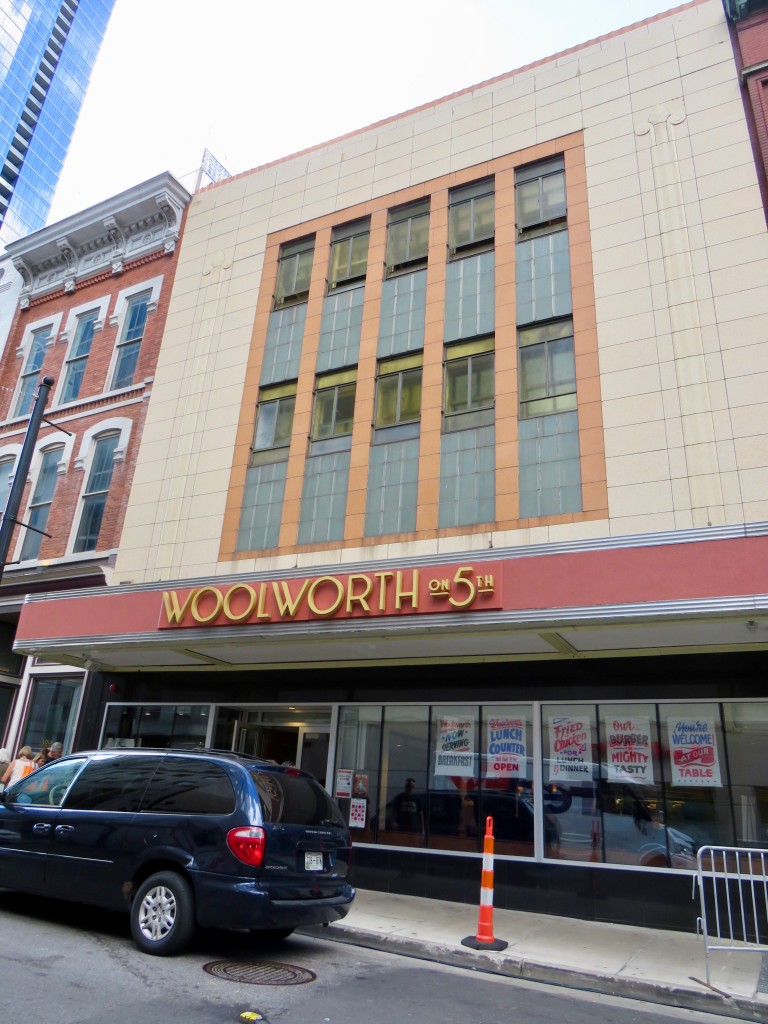 Now known as the restaurant Woolworth on Fifth, the storied site was built in the 1890s and went through a number of retail tenants before opening its doors as F.W. Woolworth in 1913. The lunch counter was introduced in 1925 but a fire in 1941 destroyed the store’s interior. It opened a year later with better displays and two lunch counters, one on the main floor and a second on the mezzanine level. In 1976, Woolworth’s closed and various businesses rotated through, including a Dollar General. But all along, people knew it as a landmark for the city’s civil rights movement. A lot of excitement had built up by the time Tom Morales and his TomKats Hospitality team reopened the door this past February, welcoming all to Nashville’s most historically significant restaurant. 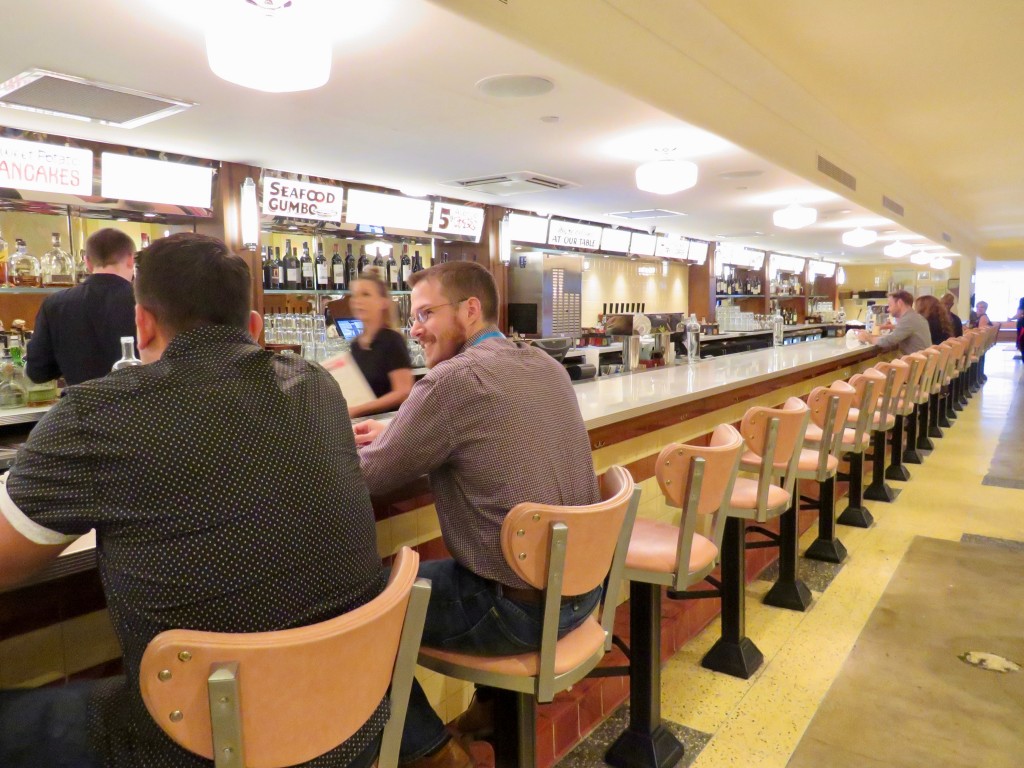 Walking in was like walking back in time. The lunch counter loomed on the right, much like it must have been almost 60 years ago with swiveling peach-coloured stools and backlit signs for seafood gumbo, pancakes and cream pie. Upstairs on the mezzanine level, the renovation has not been completed and I could see the second lunch counter’s original wall tiles and bolts in the floor for the stools. This was where U.S. congressman and civil rights champion John Lewis was first arrested, marking the beginning of a movement of nonviolent protest challenging segregation (Jim Crow laws of the 1890s prohibited African Americans from eating at public lunch counters) and racism that saw Lewis arrested 49 more times. 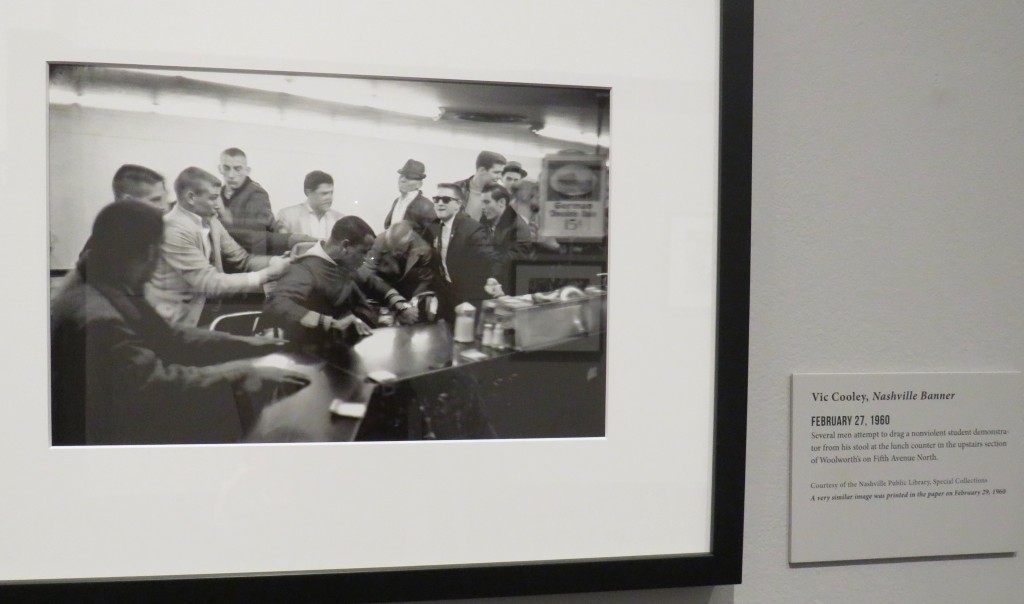 Downstairs, the dry goods cases have long disappeared and the floor was filled with tables of lively groups digging into heaped plates of fried green tomatoes, pot roast and mashed potatoes, deviled eggs and hot, fried chicken sandwiches. I joined them and was especially delighted with the fried green tomatoes topped with goat cheese and red pepper jam. 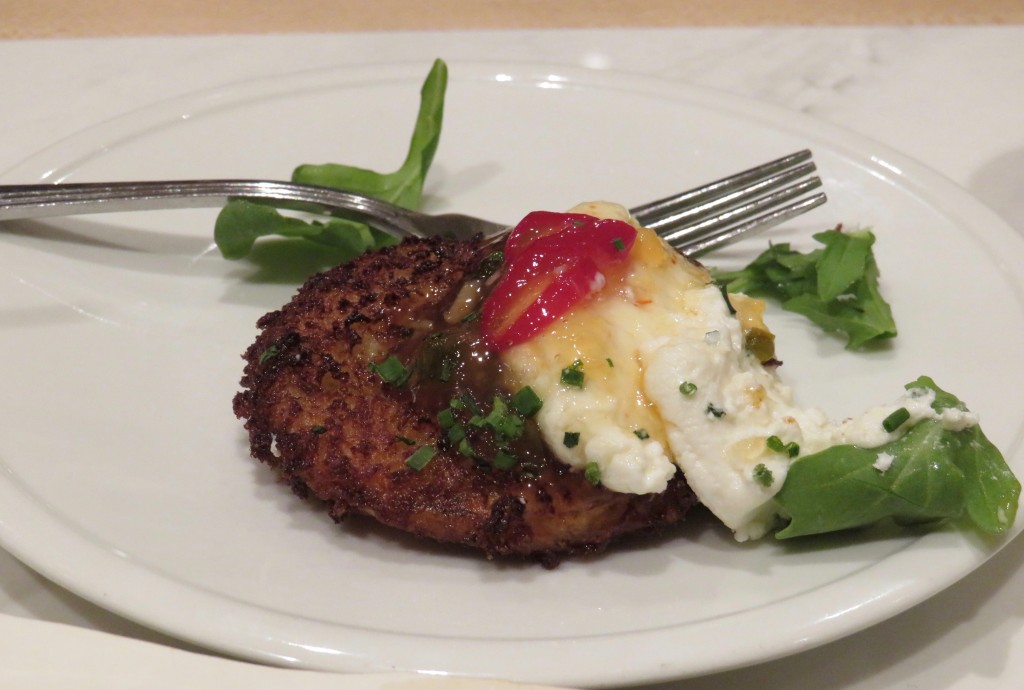 The menu definitely celebrated southern cooking and I noticed sides included black eyed peas with chow chow, collard greens, candied yams and skillet fried cabbage. It was fascinating and unsettling to try and piece together what had happened here so many years ago. I asked my server how had black citizens been served before desegregation, did they have a separate area? She looked at me. “No. they had to go out back and ask for what they wanted there.” Wow. 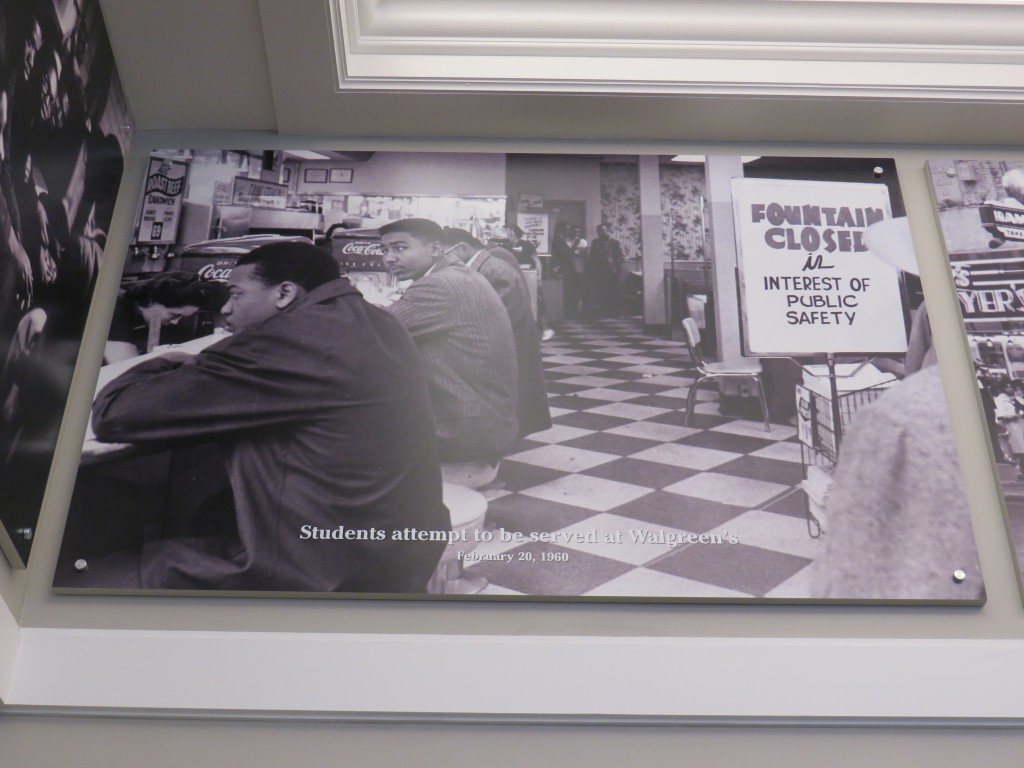 The sit-ins began in February 1960 when a group of young black college students from Fisk University, American Baptist College and Tennessee A&L walked into a number of downtown lunch counters and asked to be served. The students followed the nonviolent protest techniques of Dr. Martin Luther King Jr., and were diligently trained by Rev. Kelly Miller Smith Sr. at Nashville’s First Baptist Church Capitol Hill. The method was to endure abuse without reacting or fighting back. Two more sit-ins occurred in the following weeks and Woolworth’s closed its street level lunch counter and would only allow whites up to the mezzanine level. A few days later the home of civil right attorney A. Alexander Looby was bombed and 4,000 students, including John Lewis, marched to the count house to confront Mayor Ben West.Fisk student Diane Nash asked him if segregation at lunch counters was morally right, and he answered “No.” The process of desegregation at downtown lunch counters had begun. 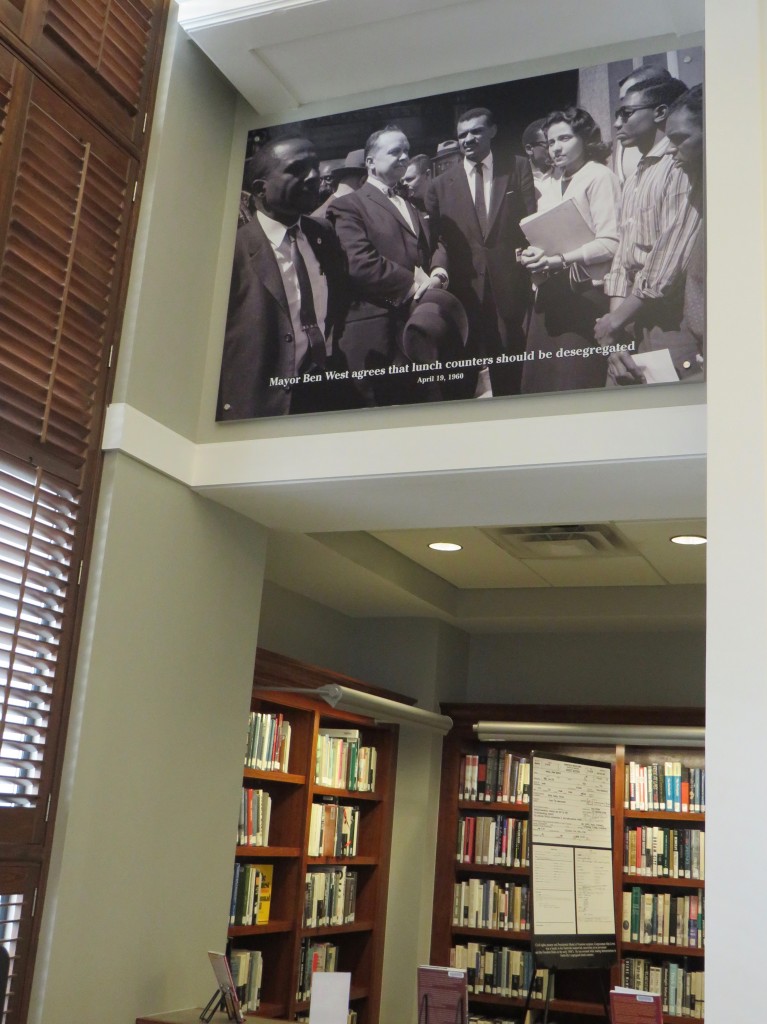 I had heard John Lewis speak at St. John the Divine church in Manhattan years ago and was curious to read more about his journey. The Nashville Public Library Civil Rights Room contained a treasure trove of information about Lewis and the Civil Rights movement. In Nov. 1986 Lewis was elected to Congress and currently serves as US Representative of Georgia’s Fifth Congressional District. He went to college in Nashville and after his arrest in 1960 he was involved with Freedom Rides and was severely beaten when he and Hosea Williams attempted to lead 600 marchers across the Edmond Pettus Bridge on their way to Montgomery. At 23, he joined Martin Luther King Jr. in the famous march on Washington when Dr. King delivered his famous “I have a Dream” speech. He also delivered his own speech to the crowd of 200,000.
Black-and-white photos from that turbulent time hung on the library room’s walls, and a symbolic circle of stools with a time-line of events honoured the lunch counter sit-ins. 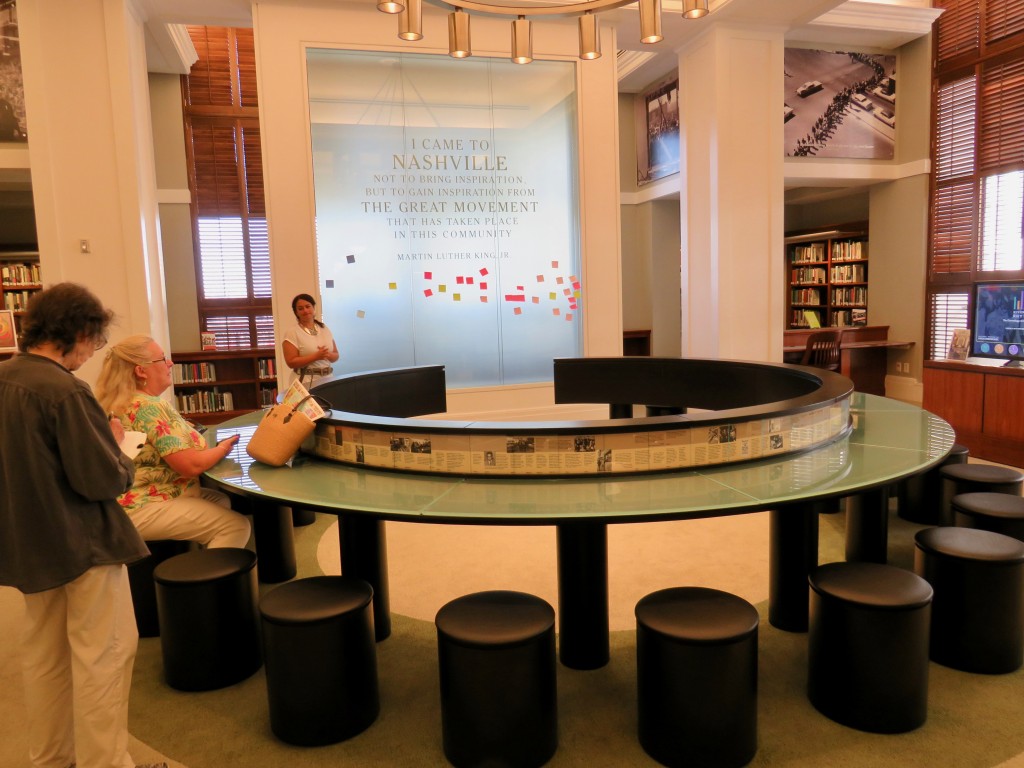 One interesting fact that surprised me regarding school desegregation in the city was that eight of 19 black children who went to white schools transferred back to their former schools. I thought it would have been higher with all the nastiness that had been stirred up. Andrea Blackman, who is in charge of the room’s special collection, is also a teacher and facilitator and has worked with school groups, police and corporate groups to clear up assumptions and set the record straight. “This is the only space of its kind in the American library system,” she explained. No wonder Nashville Public Library was named Library of the Year last year.
Wrapping up my civil rights tour, I headed to the Frist Art Museum, housed in a former Post Office constructed in 1933. My eyes were drawn to a black- and-white photography exhibit of shots published in the liberal newspaper the Tennessean, and the conservative Nashville Banner during the desegregation years. The tension, fear and hatred in the pictures was palpable. 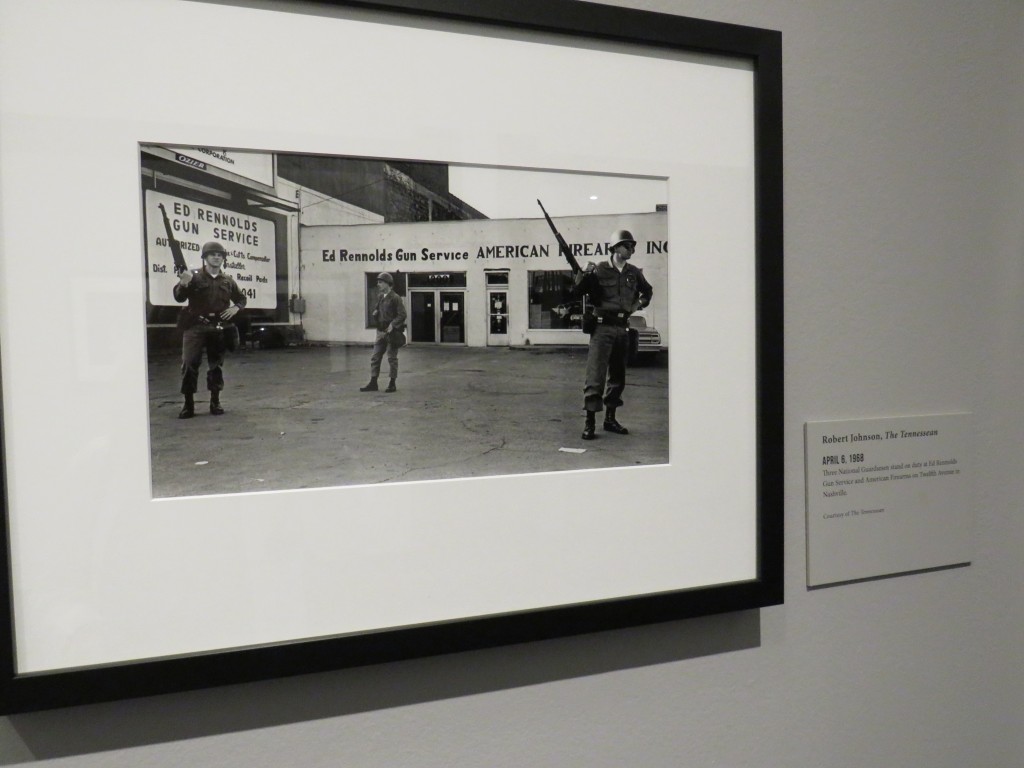 We have come so far, but when I listen to the news today, it seems like some people are slipping back to a time when dehumanizing humans was normal.
What happened in Nashville in the 1960s changed America for the better, but there is still so much work to be done.
We shall overcome, but it won’t be easy.

Comments Off on Civil Rights Champions of Nashville