Back at CUSO’s Canadian Headquarters

In late January, as winter winds howled and skaters cut figure eights on the frozen canal, CUSO Communications Brigade members gathered in Ottawa to share stories and experiences. Photographer Ethan Baron flew in from Addis Ababa days earlier and barely showed any signs of jet lag. Writer Ian Porter drove in from Halifax, nonplussed by snow and sleet. Anne Silversides, a writer based in nearby Perth, Ont., opted to drive in and stay overnight at our hub 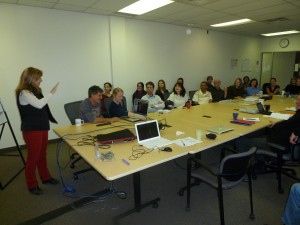 Sharing stories with volunteers and staff in Ottawa.

hotel. Edmonton-based Scott Portingale was hosted by his CUSO traveling partner, Ottawa writer Lisa Gregoire. Photographer Miguel Hortiguela and I drove from Toronto along picturesque Highway 7, savoring views of snow-draped evergreens against a sunny sky. At the last minute, photographer Brian Atkinson parachuted in from New Brunswick, his shooting gig having been canceled due to lack of snow.

A few writers couldn’t make it. Giselle Portenier was grounded in the Dominican Republic with an injured tailbone. Annick Forest was recovering from elective surgery in Vancouver (but checked in via Skype) and Anouk Des had just started a new job in Montreal. Missing photographers included William Hirtle, who had snagged another CUSO assignment in Rwanda, and Louise Renaud, who was still in Ghana.

For those of us who participated, the first day at 44 Eccles St. was all hugs and catching up. Filling our coffee mugs and digging into plates of fresh fruit, we regaled each other with tales from our adventures. Ian had faced fierce flooding in Cambodia, Anne had visited a witch camp in northern Ghana, Brian saw eggs being guarded with guns in Honduras, Lisa saw a riot almost break out as hordes lined up for a gallon of gas in Tanzania, and Miguel cycled the world’s most dangerous road in Bolivia.

Our sessions included a “show-and-tell” using an item we had picked up or a photo. I brought a silver Ethiopian cross and explained how deeply Christianity was rooted in this ancient country. Anne brought a rubber stamp she had had made in Ghana for her husband. His name was prominent, while the word “poet” was tiny – a correction she requested after noting it was missing.

We also shared what we had learned. The word patience came up a lot. Scott talked about “buck fever,” a frozen feeling that comes over hunters when the prey looks at them. He felt the same paralysis when shooting pictures of vulnerable people. Brian spoke of the underlying fear and sadness he had seen in people’s eyes in Honduras, “murder capital of Latin America.” Ethan spoke of anxiety people in Ethiopia felt about offending those in power.

Our trips were exhilarating, eye-opening, upsetting and life-changing. We captured as much as we could in stories and photos which CUSO will use for internal and external communications throughout the year. Hopefully some will appear in exhibits and possibly a book.

Prior to starting our journeys, Giselle and her husband had announced they would sponsor a photo contest, the prize being a bottle of champagne and $500 towards the winner’s favorite charity. Each team sent in a shot from their travels and a panel of CUSO staff judged them. Lisa and Scott, and Ethan and I were tied for the prize. A CUSO staffer came to the rescue with a second prize, two beautiful, hand-made stained glass picture frames. We drew straws and Ethan and I got the frames. I can’t wait to use it for our winning shot, a photo of Ethan and I in our CUSO t-shirts, standing over the rock-hewn cross at Lalibela. 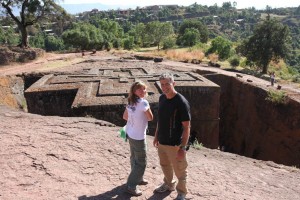 The last night we all went out for dinner at a pub near our hotel. Sean Kelly, CUSO communications director, regaled us with stories of his volunteer days when he drank and ate questionable substances and recorded it all for posterity. None of us did anything so foolish on our trips…or did we? Maybe at a 10-year-reunion we will reveal all.

As our reflections, photos and stories are gradually unrolled this year in CUSO’s marketing campaigns, newsletters and donor appeals, I hope they garner  more sponsors and recruits. It really is a fantastic organization and one I would work with again in a heartbeat.