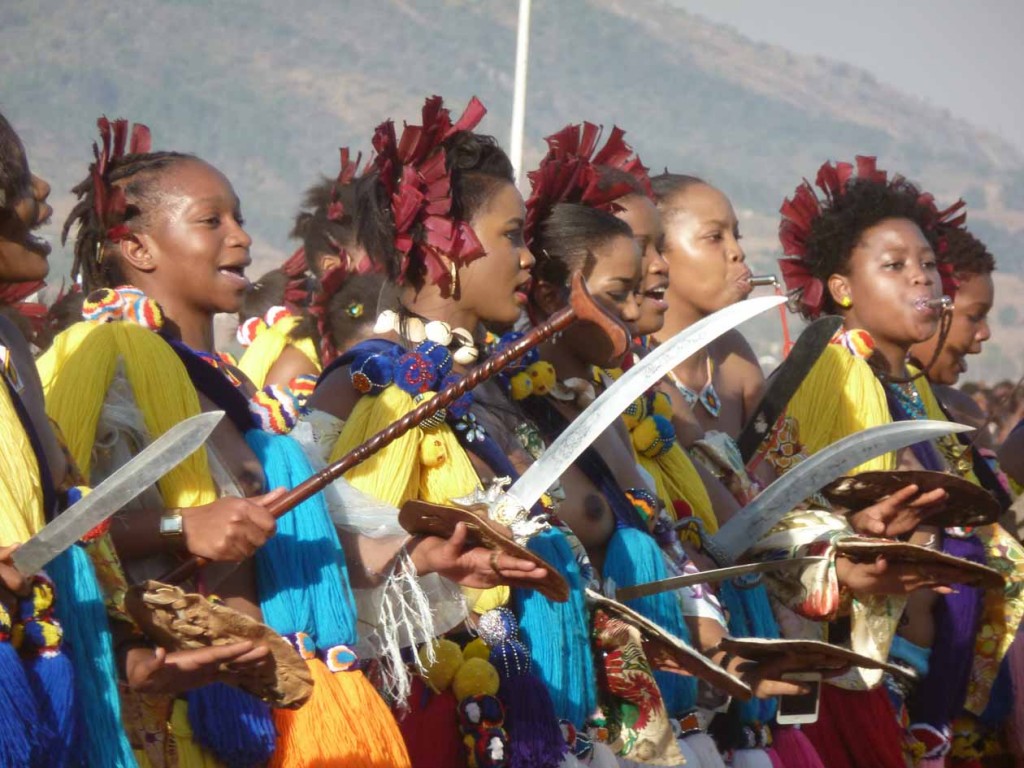 Ever since I got to Swaziland, people have been talking about Umhlanga. Gina, a German volunteer in our office was incredulous when I admitted not knowing what it was. “Have you been living under a rock? Umhlanga is Swaziland’s biggest event. Every year we always see pictures of it in the newspaper in Germany.” Smirks and smiles accompanied every mention of this event, especially by the guys. “All the Swazi maidens dance before the king, and they’re almost naked,” Gina explained. Wow. How could I not know about this? I started to do a little digging on the Internet and couldn’t actually find that much. Even Wikipedia’s listing was lacking citations. What I was able to piece together was that Umhlanga, also known in English as the Reed Dance, happens every year over eight days, usually the end of August, early September, when reeds are ready for harvest. 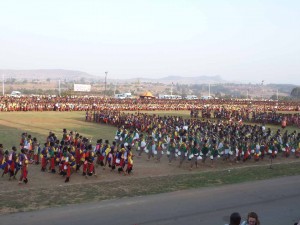 Sings and dancing (more like marching) round the stadium.

Thousands of Swazi maidens (reports state anywhere from 20,000 to 60,000) pay honour to the Queen Mother, marching to fields of reeds, chopping them down, bundling them up and then presenting them to the Queen Mother as windbreakers for her residence. Over beers at the local hotel, I found out from various Swazi men that the King was known to choose a wife from the maidens occasionally. Some people even thought the whole exercise was for the King. 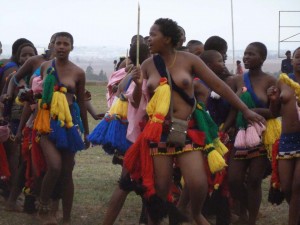 The costumes were the big attraction for onlookers — a bead necklace, wool sash, rattling anklets made from cocoons, and skirt (actually more of a belt). Many maidens carry a machete, which they use to cut the reeds. 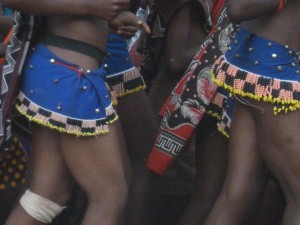 The maidens make their own skirts. Good thing it was warm that day. 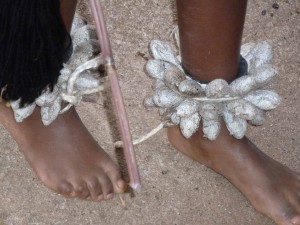 When did this all begin? The Internet sources were fuzzy. Maybe the 1940s, maybe more recently. It seems the official purpose of the annual ceremony is actually about virginity. When I arrived at the big event, I was given a pamphlet that noted, “This tradition is focused on encouraging young Swazi women to abstain from intimate relations and keep their virginity intact until they are considered old enough to be married. The second main objective is to provide tribute labour for the Queen Mother.” The age of participants ranged from toddlers to young women in their twenties. Apparently there is random virgin testing. A Swazi woman pointed out a young woman with a fantastic, blingy hair arrangement. “That’s the King’s girlfriend,” she whispered. Humm. My guess is she managed to avoid the testing. At the head of the regiments of girls were lineups of young women with red feathers in their hair. A sign of royalty, I was told. There were a lot of red feathers, which makes sense since the King has 14 wives (and many children) and his father had 70 wives and around 1,000 grandchildren. Lots and lots of royalty in Swaziland, I’ve found. I missed the presentation of the reeds to the Queen Mum, but I got there for the King’s appearance.

I missed getting a photo of the King, but this guy's rear view was more interesting anyway.

A red carpet was rolled out onto the stadium grounds and out trotted a group of around 50 men, all in traditional Swazi attire – a long cloth tied around the waist, topped with a leopard skin. Apparently Nelson Mandela’s grandson was amidst the throng. The group ran around the maidens, stopping to pay tribute by bending before the ones that caught the King’s eye. When they were finished and back up in their stadium seating, assistants handed out Styrofoam boxes to select guests. Gina had somehow made it into a VIP area. “I was sitting near the King,” she told me the next day. Thus, she got a Styrofoam box. “What was in there?” I asked. “Samosas and pizza slices.”  At the end of last day of the ceremony, the sun slipped down behind the mountains flanking the stadium and Ludzidzini Royal Village and one of the King’s daughters came out to do a dance. Singing and shaking, she proudly proclaimed, “I am a virgin and I am not afraid to be tested.” As if daring an inspection, she promptly did a back bend. Nervous laughs could be heard amongst the audience. My Swazi friend noted, “She did this once before and was spoken to about it.”  Royals and controversy. Doesn’t matter what country you’re in. Wonder if she’s met Prince Harry? 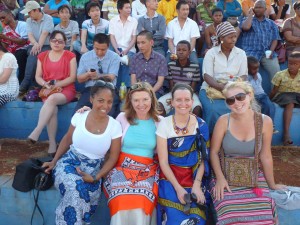 Luckily we didn't meet maiden requirements, so we didn't have to wear maiden attire.