What International Day of the Girl Child Means to SWAGAA 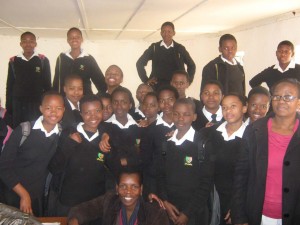 Members of the Girls Empowerment Club, Swazi National High School with SWAGAA's Doreen Ngwenya (lower, centre), co-ordinator of the clubs, and a teacher from the school (r).

An article I wrote that appeared in The Times of Swaziland…..

The first International Day of the Girl Child on October 11 is an exciting event for the Swaziland Action Group Against Abuse (SWAGAA) as it marks a culmination of a several efforts and initiatives aimed at supporting the Girl Child worldwide and in the country.
A prime example, which is the pride and joy of SWAGAA, is the Girls Empowerment Clubs programme. This initiative is modeled after a programme in Zimbabwe and was born out of a belief that all girls have a right to a safe space where they can freely and openly learn about their human rights, share their experiences, and their hopes for the future.  SWAGAA started the program in 2008 with the support from Canada’s Crossroads International as a way to encourage the development of a positive self-concept among young girls while providing comprehensive education about sexual and gender-based violence, HIV and AIDS and healthy life choices. The establishment of the school-based clubs was in response to the disturbing findings of a UNICEF 2007 study on Violence Against Children which showed one in three females in Swaziland have experienced sexual violence as a child.
Currently there are 12 clubs, five in primary schools and seven in high schools in both rural and urban areas in the country. On an annual basis, more than 400 young girls benefit from these safe spaces and begin to realize their strength and potential.  To date, more than 2,000 Swazi girls have gained the skills that will prepare them to become dynamic women in leadership and agents of change for society.
Assessments of the program show some very positive results, which among others include: reported decrease in school drop-out rate due to teenage pregnancy, reported increase in club members’ academic achievement despite poor performance prior to club establishment – some have even ranked in the top five achievers.
One of the most effective tools used in the club is a personal journal, which every club member receives. When permitted by the girls, club leaders read through the journals to identify and report challenges in the girls’ lives. This exercise allows the girls to speak out about their life experiences and enables the club leaders to assist them, whether through identifying and referring cases of abuse to SWAGAA, or to connect the girl with other relevant structures within the community such as child protection committees for other support needs. The examples are many. One leader recalled a nine-year-old girl in a rural area who drew a house with no windows, roof or doors. It was empty. She also drew a picture of herself and two younger siblings looking very lonely, playing outside. After reading through the journal, the leader asked her about the picture. The girl said she wanted to become a better person tomorrow, so she could finish the house her deceased parents left to them. This further enabled the club leader to identify the abject poverty the children were living in and connect them to other agencies (including Crossroads International, which provided them with school uniforms) and community structures which monitored their situation and ensured the children attended school and had a healthy living situation.
Through working with trained mentors, SWAGAA ensures that the girls also develop a strong sense of responsibility toward the development of their communities. Girls are encouraged to do community outreach programs to get buy-in from the community, while raising awareness about the Girls Empowerment Clubs and the activities they engage in.
SWAGAA appreciates the importance of empowering the boy child too, particularly in the area of human rights and gender. It is important to challenge and deconstruct status quo notions of masculinity starting at an early age and it is for this reason that SWAGAA has developed a program for engaging men and boys as agents in promoting Human Rights and Gender Justice in Swaziland.
On October 11th, the world celebrates the girl child because globally, where there is poverty, disease, lack, exploitation, discrimination, unemployment, illiteracy, mortality, and hunger — the most vulnerable to these social ills is the girl child.  There is a need to champion the girl child, to break the divide and ensure that girls and boys, men and women, can have equal opportunities and be celebrated equally.