The final push…16 Days of Activism Against Gender-based Violence 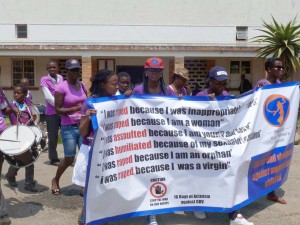 The mini skirt march almost didn’t happen. The police thought the girls were “indecently dressed.” Ironically, they had to change into jeans and longer skirts. Doubly ironic considering the barely-there “cultural” attire at the Reed Dance!

As tomorrow is the final day of the 16 Days of Activism Against Gender-based Violence campaign, I thought I’d tally up the week’s awareness-raising accomplishments. On Tuesday, I accompanied Doreen, the Girls Empowerment Club co-coordinator, to the Swaziland Broadcasting station (SBIS) where she did a terrific phone-in radio show. Some of the callers wanted to know why men aren’t targeted during the campaign. They are, but with 77% of the survivors being women, well, they get the lion’s share of attention. We did have one man come and speak at the launch about the financial abuse he suffered at the hands of his wife’s family, who cleared out his home when she died. Nomthandazo, SWAGAA’s child counselor, did three radio shows on Voice of Church, talking about child, adult and youth sexual abuse. I wrote a half page advertorial that ran in the Times about the link between gender-based violence and HIV/AIDS. I also had an article on the same topic published by The Nation magazine. Wednesday I spoke at the Girls Empowerment Club stakeholders’ meeting, with 50 girls club members, about why we were wearing the white ribbon on our chests and what wonderful ambassadors the girls are 365 days of the year, helping to report cases of abuse and spreading the word on how to prevent it. Friday was the mini-skirt march and the UN Women’s Ride On, Men Speak Out campaign, where bikers from eight countries rode through Manzini in support of the 16 Days of Activism Against Gender-based Violence campaign. I personally got to pin white ribbons on all these tough, burly and hugely supportive fellows!

Tomorrow is the last day of the campaign. There’s going to be a media breakfast at Mountain Inn. The Deputy Prime Minister’s office will make remarks, as will the executive director of SWAGAA. Ntombi Nyoni, the SWAGAA legal officer, will discuss the Gender Protocol Barometer, a monitoring of gender policies throughout Southern Africa. There will also be a media Q&A session. Newspapers, radio and TV have been very influential in getting the message out this year and the Gender Consortium, (I’m on the Media Committee), is very thankful.

Even though tomorrow is the end of the campaign, the work will continue to roll forward. Behaviour change is the most difficult kind of change. The message may have been dispersed, but now we have to see it put into action.

This entry was posted in Humanitarian and tagged Advocacy, Gender-based Violence, Legislation, Swaziland. Bookmark the permalink.