Why HIV/AIDS is so prevalent in Swaziland 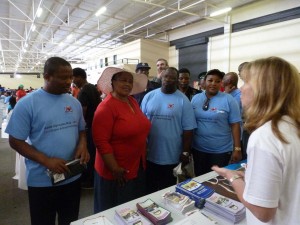 Explaining the connection between GBV and HIV/AIDS to dignitaries at the Mavuso Centre in Manzini.

On Friday, Nov. 30, Swaziland celebrated World AIDS day with a march and a presentation for 500 people at the Mavuso Trade Centre in Manzini. Two thirds of the people in attendance were from government, including police and correctional services.

I lined up for the march at 8 am and got one of the few remaining t-shirts, which a staff member at SWAGAA quickly commandeered from me when she didn’t receive one. Oh well, I didn’t come to Swaziland for the t-shirts.

Swaziland has the highest prevalence of HIV/AIDS in the world. The SDHS 2007 study showed that 26 percent of the population aged 15-49 was infected with HIV/AIDS. Anti retroviral drugs have improved the average lifespan from around 33 in 2006 to around the mid-to-high 40s today. I use the word “around”  because health care practitioners here have told me the statistics are notoriously unreliable.

At a meeting led by the National Emergency Response Council on HIV and AIDS, (NERCHA) that I attended prior to this year’s World AIDS Day events, we were told, “Don’t use the word ‘success’ but ‘achievements.’ We still have a long way to go.” An article in the newspaper the same day said the 75 percent of deaths in Swaziland were due to AIDS.

SWAGAA had an exhibitor’s stall at the event and we handed out information about gender-base violence. When dignitaries came to our booth, I told them about the link between gender-based violence and HIV/AIDS. It seems obvious, but not everyone thinks about it. When a woman is being beaten or raped, it is unlikely a condom will be used. Tears in the genital area offer an easy pathway for the infection to travel. Then there are the indirect ways GBV is linked to HIV/AIDS. If someone has been sexually abused, especially as a child, they may suffer low self-esteem and become promiscuous or go into prostitution.  Or, they may become drug addicts. This risky behavior can lead to infection.

Why is the HIV virus spreading at such an alarming rate in Swaziland? Most HIV/AIDS organizations  focus on behavior. Swaziland is on the border of Mozambique and South Africa. Truck drivers or migrant workers stopping for causal or paid sex transmit the disease. Then there’s something called Multiple Concurrent Partners (MCP). Many people sleep with a few partners at the same time. This could be transactional sex, to help pay for school fees or groceries. It might be to pay back a cheating partner; it might be due to loneliness when a partner spends months away on work contracts. Swaziland has high unemployment. It’s expensive to live here and school fees for rural people, dependent on subsistence farming, are high. Then there is patriarchy and polygamy. There are many prevalent scenarios. Men feel it is their right to have multiple wives and yet often they are unable or unwilling to take care of them, and their children. Young girls become pregnant and have no support from their families or the man who made them pregnant. Women are discouraged from talking about sex culturally, so often there is sexual dissatisfaction in a marriage. The spiral goes on and on.

Here are some quotes from Swazi participants in a study published in Onelove, a 2008 10-country research report funded by Irish Aid, DFID, and the European Union amongst other donors. The report says young people are often pressured by their peers to acquire material possessions they cannot afford and so they become involved with an older person who provides these things in exchange for sex. Here, it’s called ‘Intergenerational sex.’ A participant noted, “It’s the relationship between teachers and students yet the teacher has got a wife or a girlfriend and at the same time the student has got a boyfriend.” The report also noted that polygamy and gender inequality create serious power imbalances that fuel MCP.

HIV/AIDS continues to spread in Swaziland, but not at quite the pace of the mid-2000s. Achievements, not success. The big theme at  this year’s event  was about getting to zero infections. Tackle the root causes of behavior and there might be a chance.

This entry was posted in Humanitarian and tagged AIDS, Health, Swaziland. Bookmark the permalink.