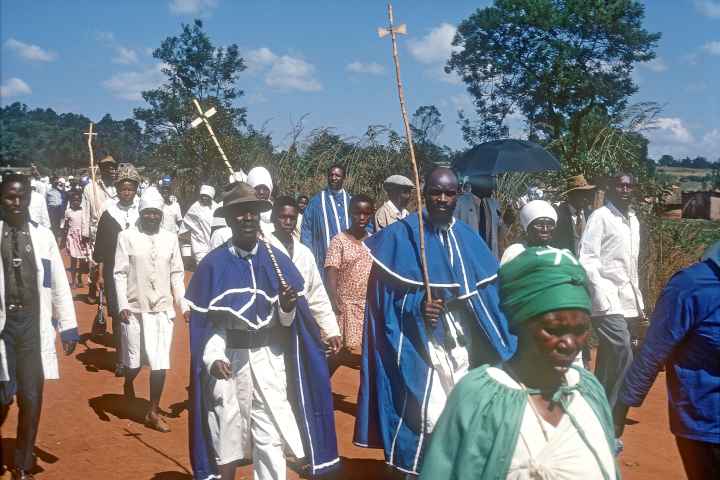 Members of the Swaziland Zionist Church, circa 1974. This shot is by Ludo Kuipers, Sun Apr 14, 1974 and taken from World Pics.

Here in Swaziland, there is often a blurring of the lines between magic, witchcraft and Christianity. Here are some odd things I’ve seen in the newspaper lately…

A talking calabash, which reporters from the Swazi News went to take pictures of. They were afraid it was possessed by demons. The father of a soldier, killed by other soldiers, heard the calabash speak. Soldiers dying at the hands of other soldiers have been in the news a lot lately. The father said the calabash was revealing details about his son’s death. 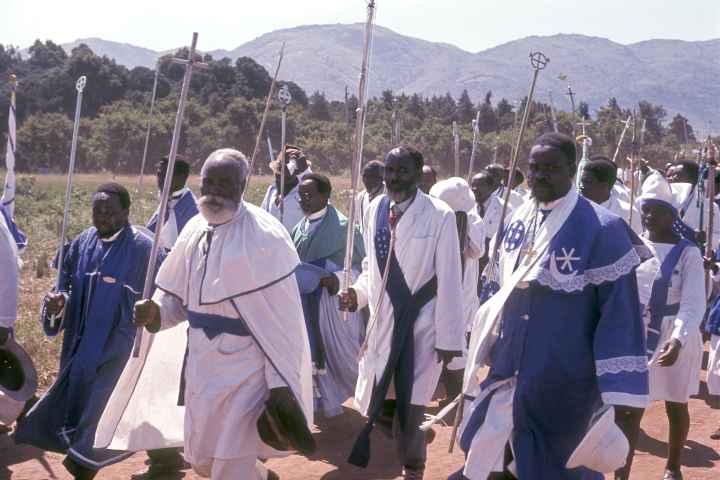 Zionists marching on Easter weekend to the King’s residence, 1970. Photo: Ludo Kuipers. They still dress in a similar way and I see them often on a Saturday, heading out to an all night prayer session.

“The Zionist churches are characterised by a commitment to faith-healing, to river-baptism (in a “Jordan” river or sea) and to the Pentecostalist gift of speaking in tongues.

“The Zionist churches were founded by the missionary PL Le Roux, an Afrikaner who had become committed to faith healing. In 1903 Le Roux left the Dutch Reformed church to join a group dependent on the Christian Catholic Apostolic Church which had been founded in the USA by John Alexander Dowie and was focussed on the city of Zion, Illinois, near Chicago. Le Roux had a close and happy relationship with Africans, and easily conveyed the tenets of Zionism to the African Church he served. They called themselves the Zionist Apostolic Church. A few years later Le Roux moved on from Zionism to Pentacostalism, carrying his flock with him from faith-healing to speaking in tongues, but retaining their name.

“Structurally Zionist churches stand half way between the “Ethiopian” churches and the prophetic churches. Like the “Ethiopian” churches they have clear missionary roots, but they are even more fully enculturated than the Ethiopian churches, openly accepting polygamy and fitting in to the structures of African traditional religions in terms of spirit-possession, faith-healing, manifestations of spiritual power and the like. Like the prophetic churches, they share the same basic assumptions about the reality of witchcraft and the spiritual dimensions of reality, while rejecting witches and spirits as evil beings to be cast out. 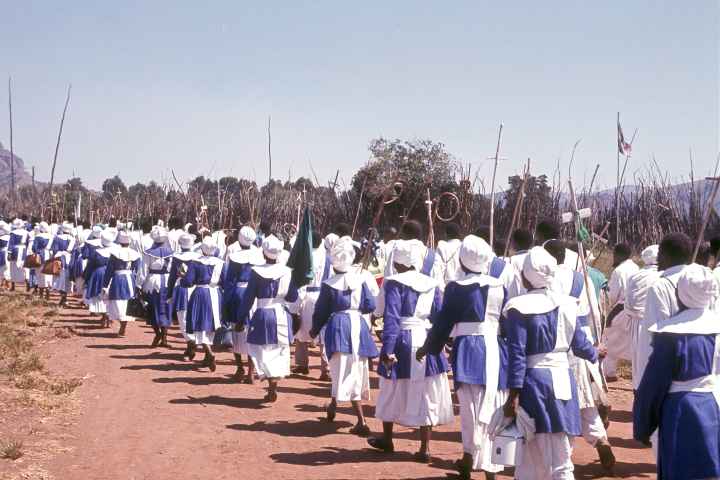 Here’s a little summary of the story in the newspaper…

There was a disappearance of a Zionist in a river, at a place used by Zionists as a cleansing ceremony pool.  I’ve seen it…there were candles, egg shells and milk carton strewn around, even a chicken head floating in the water. It’s a popular place to exocise demons. One day as I was walking along the rocks at the river’s edge, I heard some frantic shouting. Peeping over a boulder, I spied a Zionist preacher in his blue robes, shouting at and shaking a young woman who stood in her jeans and t-shirt as river water poured over her. The spot is very picturesque, a little waterfall runs into a pool, collecting before it continues downstream. But back to the newspaper story…The man’s sister pointed out his clothes by the river bank, to prove he had been there. She arranged a ceremony with a Zionist preacher, sacrificed a cow into the river (it was alive, and swam to the other side). It was reported that the brother may have been taken by the spiritual river snake and kept underwater to undergo special training to become a spiritual healer. The sister claimed he would emerge from the river the next day. Reporters and onlookers went, but he was a no show. Then the sister said he would emerge from a dam in South Africa. She had the police escort her to the dam…and there he was. A photographer took his picture, looking very wet. People were outraged. It was a “sham,” a “waste of the police’s time”… “Zionists don’t believe in spiritual snakes.” We still don’t know the whole story.

Here’s a link to a fascinating video by Kyle Meyer who was in the country last year documenting a rural Zionist Church. http://www.kickstarter.com/projects/1791225461/touch-of-god 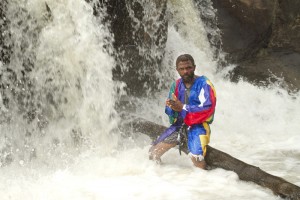 Next story..Muti, Democracy and Communism!

Last week there was a ceremony in South Africa for the “Break the Chains” campaign, for the release of political prisoners and the “unbanning of political parties” in Swaziland. It was hosted by the South African Communist Party and members of the Vhembe community did a prayer ritual, to send muti to Swaziland to assist with the breaking of the chains, ie the stranglehold various elites have on the country. (This really boils down to royalty.) Interestingly, the SACP was calling for democracy in Swaziland. Outraged MPs in Swaziland responded, saying muti (a sort of medicine/witchcraft involving ancestral spirits) could never travel that far, and sure as heck couldn’t cross rivers.

This entry was posted in Destinations and tagged Media, Religion, Swaziland. Bookmark the permalink.