1)    Swaziland roads are covered with speed bumps. They are everywhere, especially at intersections.

2)    There is roadside litter, but unlike in North America there a total absence of Styrofoam coffee cups since Swazis aren’t really into coffee.

3)    There are a lot of Mercedes and BMWs here. Some old, some brand, spanking new. Of course, that’s along with double cab trucks (usually with a UN decal) and kombis, which are mini vans with a capacity of 15, but usually stuffed with 25, no seat belts.

4)    24-hour gospel prayer gatherings are really popular. Yesterday was Good Friday and the bass was booming all over town from 7pm to 7am this morning.

5)    The newspaper has a regular gospel section.

6)    Lots and lots of people are pastors. There is no training necessary. Pastors shout out about the evils of demons on buses, vegetable markets and under trees.

7)    Mega churches are popular. There are many large structures and tents where people gather. One popular “prophet” predicts people’s futures.

8)    Sunday afternoon is really big drinking day. Many a time I’ve been on a kombi and had conversations with inebriated seatmates. Most of them ask me if I’m a Christian.

9)    More than 80% of the population lives in rural areas and lives on less than $2 a day – no running water, pit latrines.

10)                  The countryside is also scattered with monster mansions, reputedly owned by royalty or the elite, also knows as “untouchables.”

11)                   The constitution of 6 September 1968 was suspended 12 April 1973 by a State of Emergency decree imposed by King Sobhuza II, the father of the current King Mswati III. The decree gave absolute power to the monarchy and banned organised political opposition to royal rule.

14)                  Media is severely censored and predominately owned by the state (ie the King, who has absolute power). The usual ethics of journalism do not apply. Many stories don’t really make sense. Here’s a link that explains why Swaziland ranks 155 among 179 nations in the world in regards to press freedom. http://allafrica.com/stories/201302111702.html 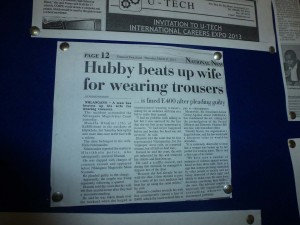 16)  If people speak out about the unfairness of the political system, they often lose their jobs, their cars and their dignity. So there isn’t a lot of speaking out.

This entry was posted in Destinations and tagged Law, Media, Politics, Swaziland. Bookmark the permalink.