Posted on March 5, 2016 | Comments Off on MEGA RELIGION: Prophets & Demons 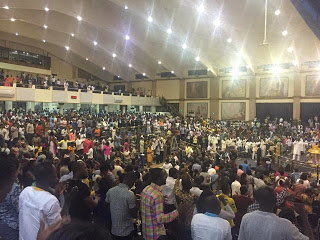 When I lived in Accra, I would see church after church. They were along the ‘mega’ style I’ve seen in North America. Large. Some were on main streets, others on dirt roads in back alleys. I’d also see billboards featuring superstar pastors, calling the faithful to various events. New Year’s was The Crossover, where people went to gatherings that lasted 24 hours. I saw some Methodist and Catholic churches, but most were of the evangelical variety and their pastors were also often referred to as prophets. Many had their own schools and universities. It’s big business. I went to a service with a Ghanian friend one night at the Action Chapel International led by Archbishop Nicholas Duncan-Williams, who has his own religious TV network. His wife Rosa Whitaker was with him on stage. Rosa is American and was an advisor to President Bill Clinton on trade with Africa. Her consulting company still has an office in Washington. It was part of a 7-day event called The Summit. The night I was there a preacher from Los Angeles was featured. The main hall was two stories high and held around 1,000 people. Those who couldn’t get in sat outside and watched the proceedings on a video screen. Very rock ’n’ roll. The church itself was more like a sprawling community destination with a bank, convenience store, and souvenir shop – all built of gleaming glass, tile and travertine. The evening started out with music, mostly gospel choirs. At one point, a team of men clad in dark suits brought out waist-high barrels and people lined up to put in their donation envelopes. My friend gave me 5 cedis to put in. They did this a few times during the night, but we only donated once. The LA preacher whipped the crowd into a frenzy, people were on their feet shouting about the holy spirit. I found myself standing up and clapping along. Very infectious…even though I wasn’t all that clear on what he was saying. We left before it was over since my friend didn’t want to get stuck in the parking lot traffic. She is a very practical person.
Lately, I’ve also been hearing about the fetish priests and shrines where sacrifices of goats and chickens are made. Our office was going to move next to one of these locations, a staff member told me. “We saw people wearing white calico, the place for sacrifices and buckets for blood. Not a good neighbour for our NGO. Our clients will be scared!” he said. Belief in witches and curses is also big, but not talked about much. A friend showed me a picture of a little boy with a huge growth on his back. She had been asked for some help in getting him medical care. “The parents keep him hidden because the villagers think it is a curse,” she explained. Another woman I know, a German volunteer helping at a home for people with epilepsy, said she took one of the home’s clients to the market. “My client had a seizure and the market vendors started to beat her. I had to fight them off. They thought she was possessed by demons,” the volunteer explained. Recently, there was a murder of an MP in Accra. At the funeral all was somber and proper protocol was followed, but some of his constituents turned up with eggs and schnapps… “they cracked the eggs and poured the libations on the ground, calling for a curse on the killers,” noted the newspaper.
The evangelical service I attended was full of drama, spectacle, dancing and shouting out. I suspect the ceremonies of traditional fetish priests may incorporate some of the same, but with a decidedly darker aspect. In Ghana, the air crackles with spiritual possibility, dark and light, fear, tension and joyous surrender. Unlike in North America, belief in the unseen is immense.