Posted on August 16, 2017 | Comments Off on Serene Beauty of the Aga Khan Museum 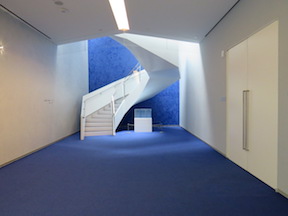 One of the most beautiful museums in Toronto is the Aga Khan Museum, which opened in 2014. It’s a place I had longed to go and finally I did a few weeks ago.
I was not sure exactly who the Aga Khan is, so this visit cleared up my questions. The Aga Khan is founder and chairman of the Aga Khan Development Network (AKDN) and is the 49th hereditary Imam (Spiritual Leader) of the Shia Ismaili Muslims. He is a direct descendant of the Prophet Muhammad. He was born in Geneva, Switzerland and holds a degree in Islamic history from Harvard University. He ascended to the hereditary position of the Imam of the Ismaili community in 1957 at age 20 and is dedicated to culture, peace and philanthropy.There are between 12 and 15 million Ismailis and they are ethnically and linguistically diverse, living all over the world.
Interestingly the AKDN is one of the largest development organizations in the world, serving beneficiaries in 30 countries of Asia, Africa and the Middle East, irrespective of their faith. 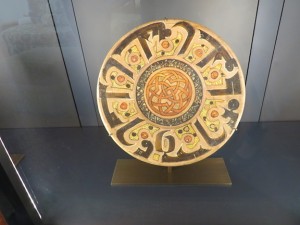 My guide, Nasreen, gave me lots of information about the museum and the 17-acre property including a prayer hall, garden and restaurant. “His Highness wanted there to be a lot of light. The building faces 45 degrees solar south so the external walls are lit during the day.” Every I looked there were geometric embellishments. “That encourages contemplation. It’s common in Islamic architecture,” Nasreen explained. 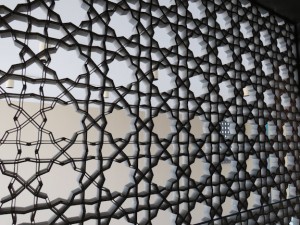 In among the exhibits was a map. “Do you notice something? There are no borders. We are all in this world together,” explained Nasreen.
There were more than 1,000 artifacts in the permanent collection, spanning 1000 years of history. Ancient manuscripts, medical books, robes and a stunning Syrian fountain from the Mamluk Dynasty. “It was shipped here in 22 crates. I think it will stay here,” commented Nasreen. 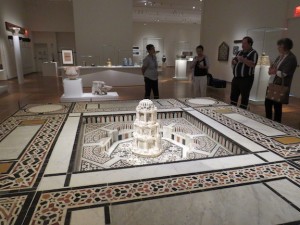 The garden was stunning. In the formal garden were dawn redwood and honey locust trees, a serviceberry orchard, emerald cedar hedges, thyme plants and a bed of Russian sage. 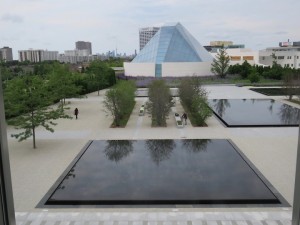 I learned that the landscape architect, Vladimir Djurovic wanted to re-create the sounds, scents, textures and colour that he experienced while visiting traditional Islamic gardens in the Alhambra, Spain, as well as Humayun’s Tomb in Delhi, India. The result? An ephemeral and timeless space that changes with the seasons and offers a lovely calmness to soothe the soul.