SIPPING AND SAVOURING IN THE TWENTY VALLEY

Posted on September 17, 2018 | Comments Off on SIPPING AND SAVOURING IN THE TWENTY VALLEY 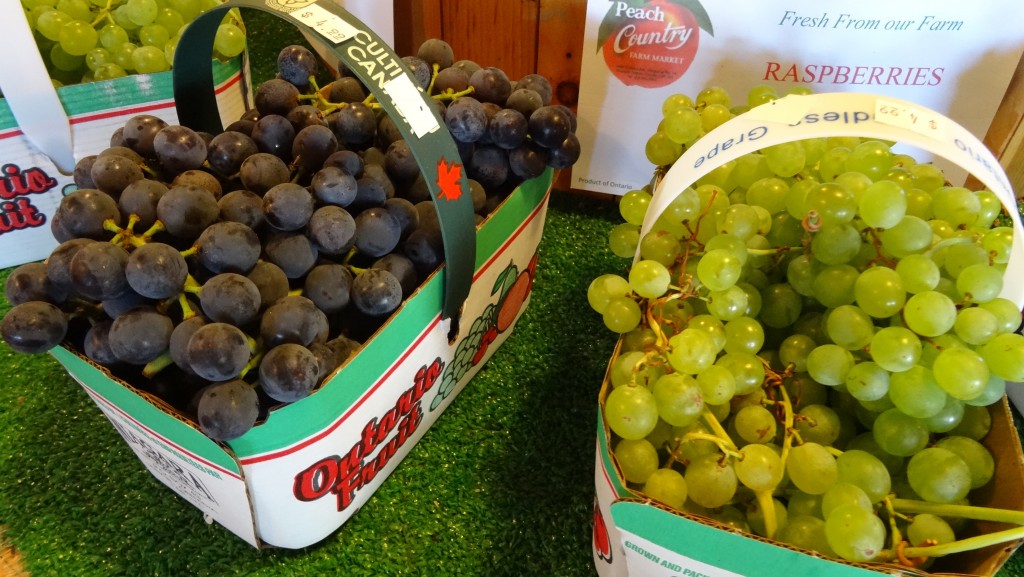 Fall in southern Ontario means harvest season. It’s a delicious time to get out and sample what’s grown in our own backyard, especially wine. One area I recently discovered that’s a mere hour and 15 minutes’ drive from Toronto is the Twenty Valley. Anchored by the town of Jordan, close to St. Catharines, the region is the sassy younger sister to Niagara-on-the-Lake and is chock-a-block with wineries, farms, funky boutiques and gorgeous parkland. 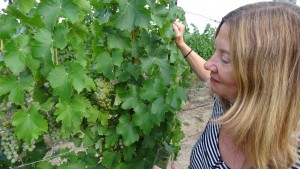 My first stop was at Featherstone Estate Winery, where sheep keep the vineyard manicured and a falcon named Amadeus scares away pesky starlings that can decimate a crop. 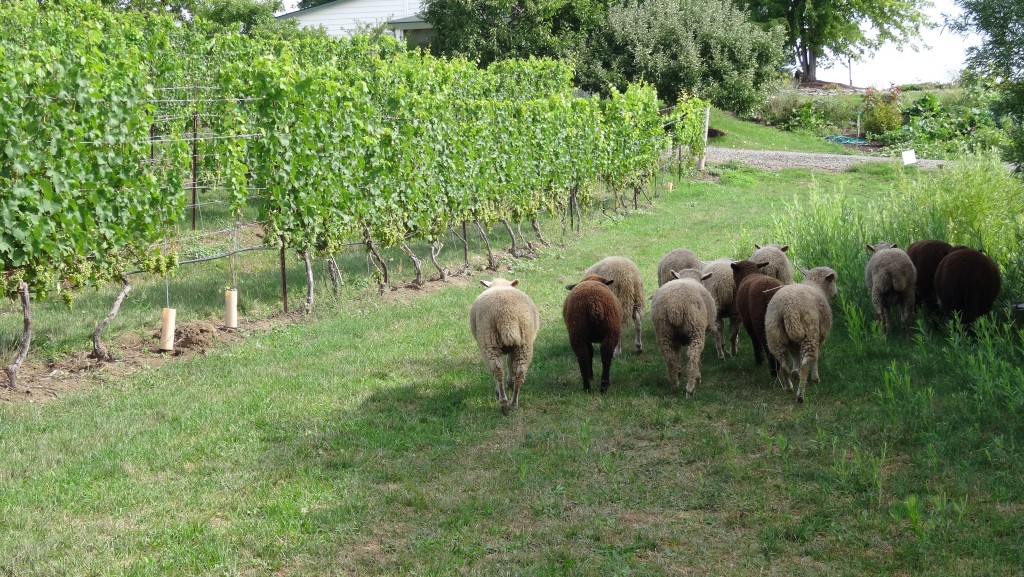 “We bring in the lambs annually to do leaf removal on the vines. We call it ‘ewe-unized’ labor,” jokes owner David Johnson. When the lambs reach a certain weight, they are sold and end up on local restaurant menus. 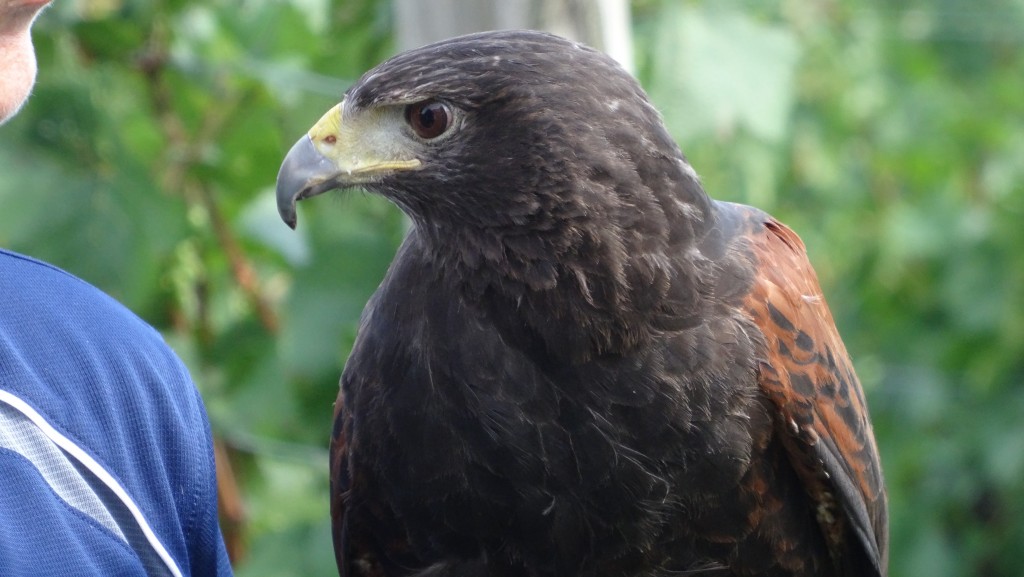 David’s wife, Louise, joined us with Amadeus perched quietly on her gauntleted arm. “He acts as a deterrent when he flies over the fields. The smaller birds leave,” she explains. Inside, David pours me a splash of of Black Sheep Riesling. It is superb. I savor the fresh, crisp apple flavor tinged with a hint of honey.
My appetite was stirring and I headed for 13th Street Winery for lunch. 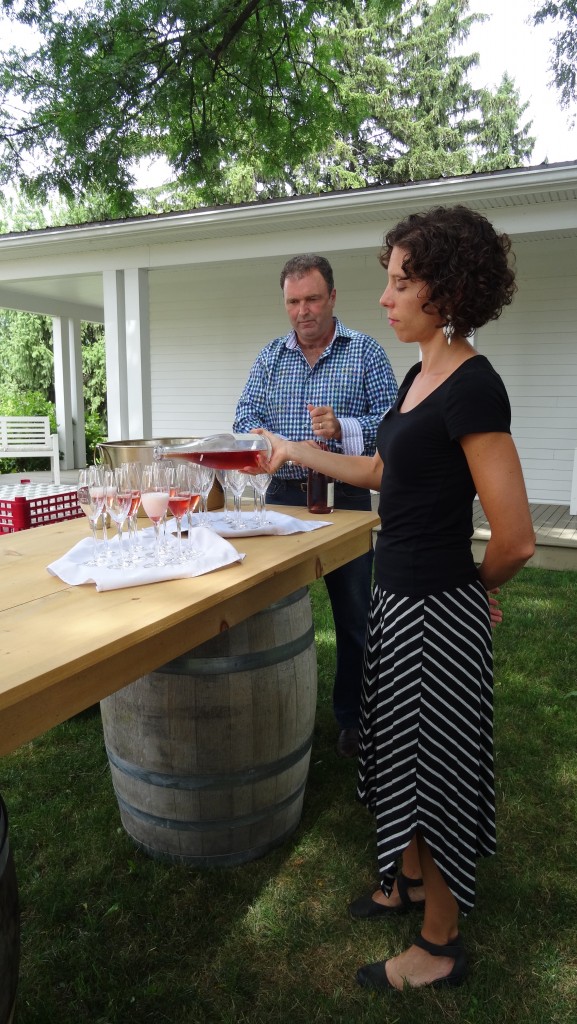 But before eating, I sipped tasters of sparkling rose, Pinot Noir, Chardonnay and Gamay Noir. Doug Whitty, the owner, told me his family has owned the property for three generations. “My grandfather came here in 1908 from Ireland during the potato famine,” he explained. The grandfather was drawn to the attractive farmland and an established community of Mennonites who had come up from the New York area during the Battle of 1812 to escape George Washington and his troops. “They valued peace and stability, but were persecuted because they were British supporters,” Doug explained. 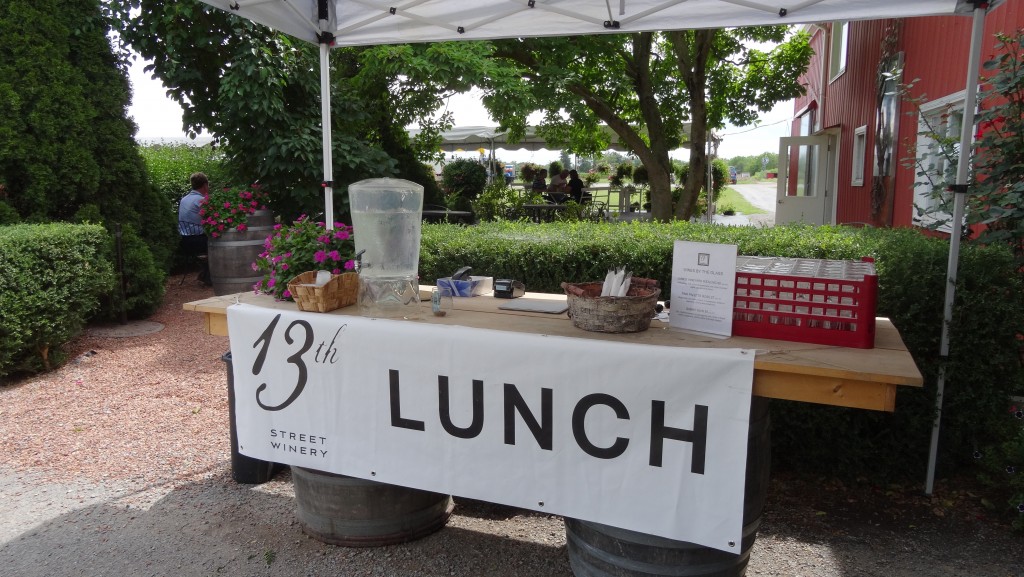 At a delightful outdoor patio, I noshed on goat cheese, heirloom tomatoes, salad. 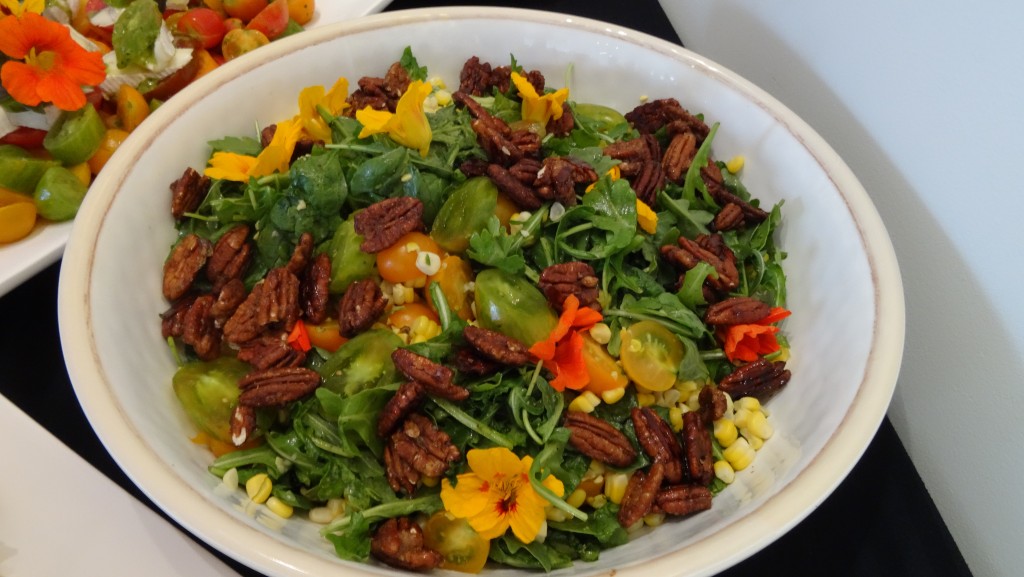 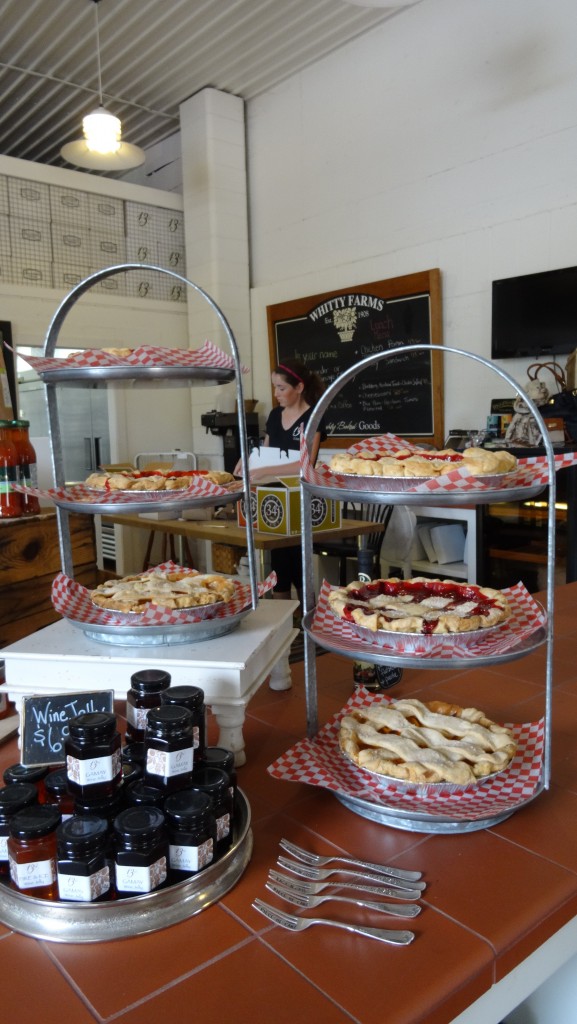 Dessert was freshly made cherry pie. Heavenly!
Amidst the rolling farm fields, I came across Balls Falls Conservation Area. There were no falls because the water had been so low on Twenty Mile Creek during the summer but that didn’t matter. 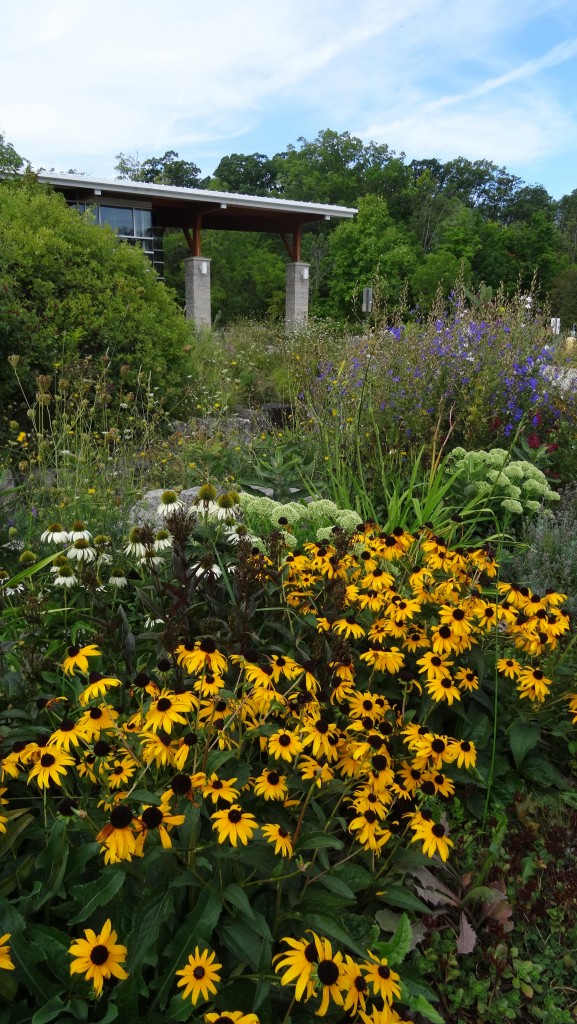 Set within the beautiful Twenty Valley, the park was once home to a mill owned by Loyalists George and John Ball who came to the area in 1807 after leaving New York. 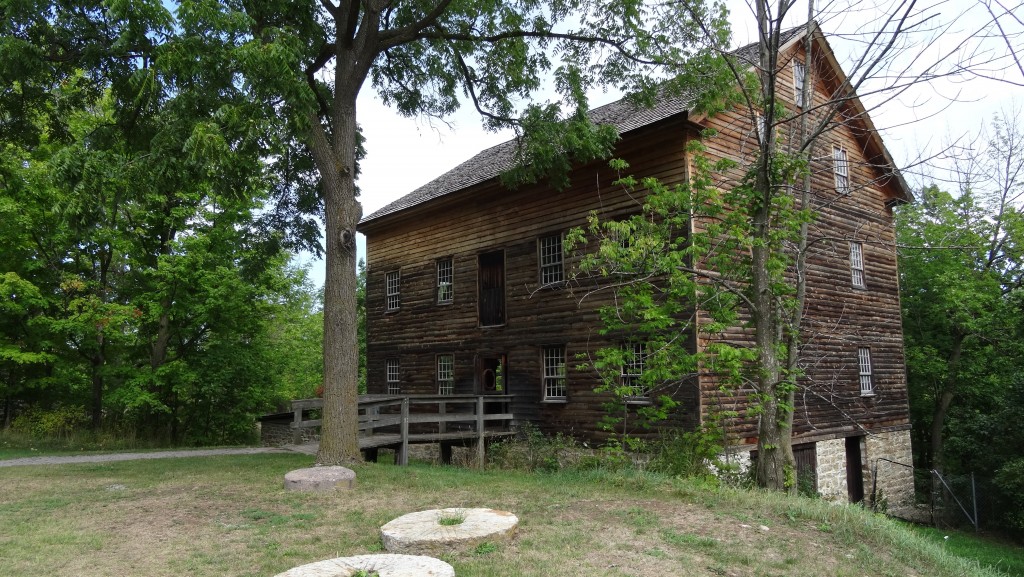 I wandered around the preserved structure, marvelling at the wooden troughs and milling machinery. “It’s one of the oldest surviving flour mills in the province made of wood,” my guide Jill Walters explained. “Milling flour produces a lot of combustible dust and many of the old mills have burned down.” Thanksgiving is the only time the mechanisms are powered (with electricity) and they sell the resulting whole wheat flour to the public. I took a quick peek at the park’s Centre for Conservation, a LEED-Gold Standard (Leadership in Energy and Environmental Design) structure full of light and laminated maple beams where school groups gather for educational presentations. A lovely place to learn and appreciate the environment.
There were 28 wineries in the region and there was no way I could hit them all. But I did visit a few key establishments. 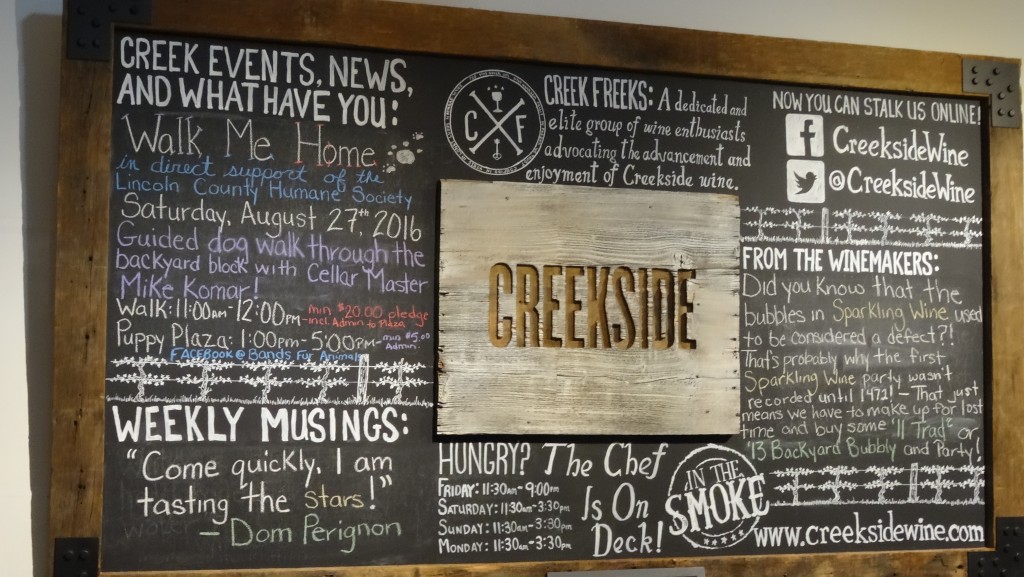 At Creekside Winery winemaker Rob Power had me taste a sparkling sauvignon blanc called Backyard Bubbly that was fruity and delicious. During my site tour, a highlight was the barrel cellar, one of the oldest and largest in the Niagara Region. Afterwards, I dug into a fragrant, peach-wood smoked suckling piglet, thick molasses baked beans, braised red cabbage and buttery roasted new potatoes at the winery’s eating spot, The Deck, helmed by chef Nathan Young, open from May until Thanksgiving.
At the Sue-Ann Staff winery, a series of Fancy Farm Girl vintages caught my attention. Flirty Bubbles, Foxy Pink Rose, Frivolous White and Flamboyant Red were available for tasting and my favorite was the bubbly one (surprise!). 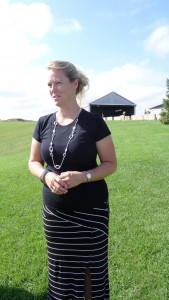 Sue-Ann’s family has been farming in the region for five generations. She lives in the original farmhouse, which also serves as her shop and tasting room. So far, her production is small, 5,000 cases a year, but it is growing. She also hosts weddings at a permanent tented site on her property overlooking a large pond.
The last winery I visited was Westcott Vineyards where Victoria Westcott graciously showed me around. 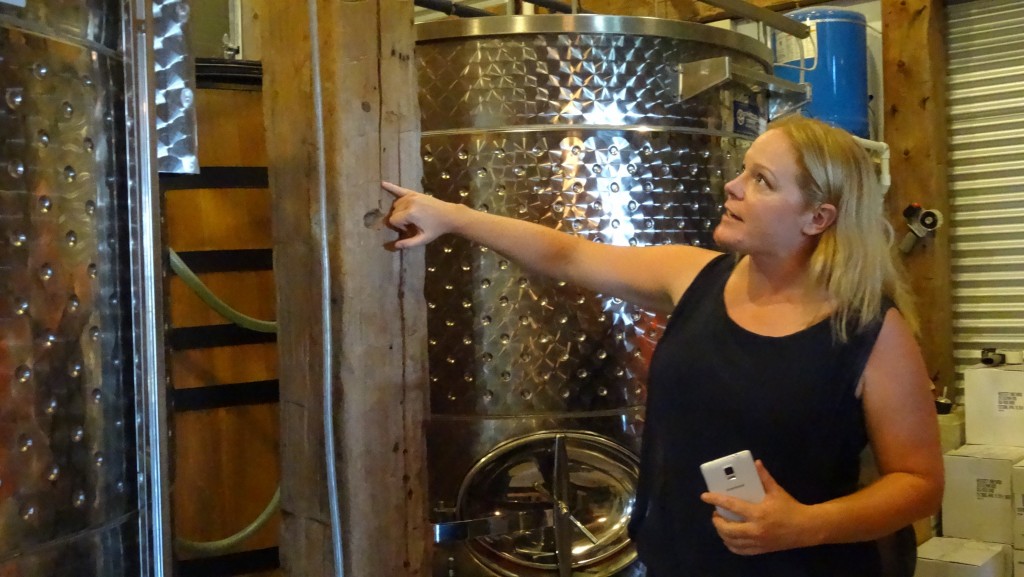 The winery was started by her dad Grant and step-mother Carolyn. Their first vintage was produced in 2012. The tasting room opened last year and Victoria came on board to lead the customer experience. Some of the wines were named after flowers. I especially enjoyed the Lillias unoaked Chardonnay which was light and crisp with the slight tang of quince. Hanging on the walls were many black and white photos including Victoria’s step-mother’s grandmothers. “They were both presidents of Temperance leagues, which is pretty funny considering what the family business is now,” she said, giving me a wink.
Twenty Valley is a hidden gem that’s easily accessible and filled with people who are passionate about producing quality products. Who knew?

WHERE TO STAY
Inn on the Twenty: Boutique hotel in Jordan with 27 rooms with fireplaces and soaker tubs. Breakfast included.