Posted on March 7, 2019 | Comments Off on Philadelphia’s Historic Playgrounds 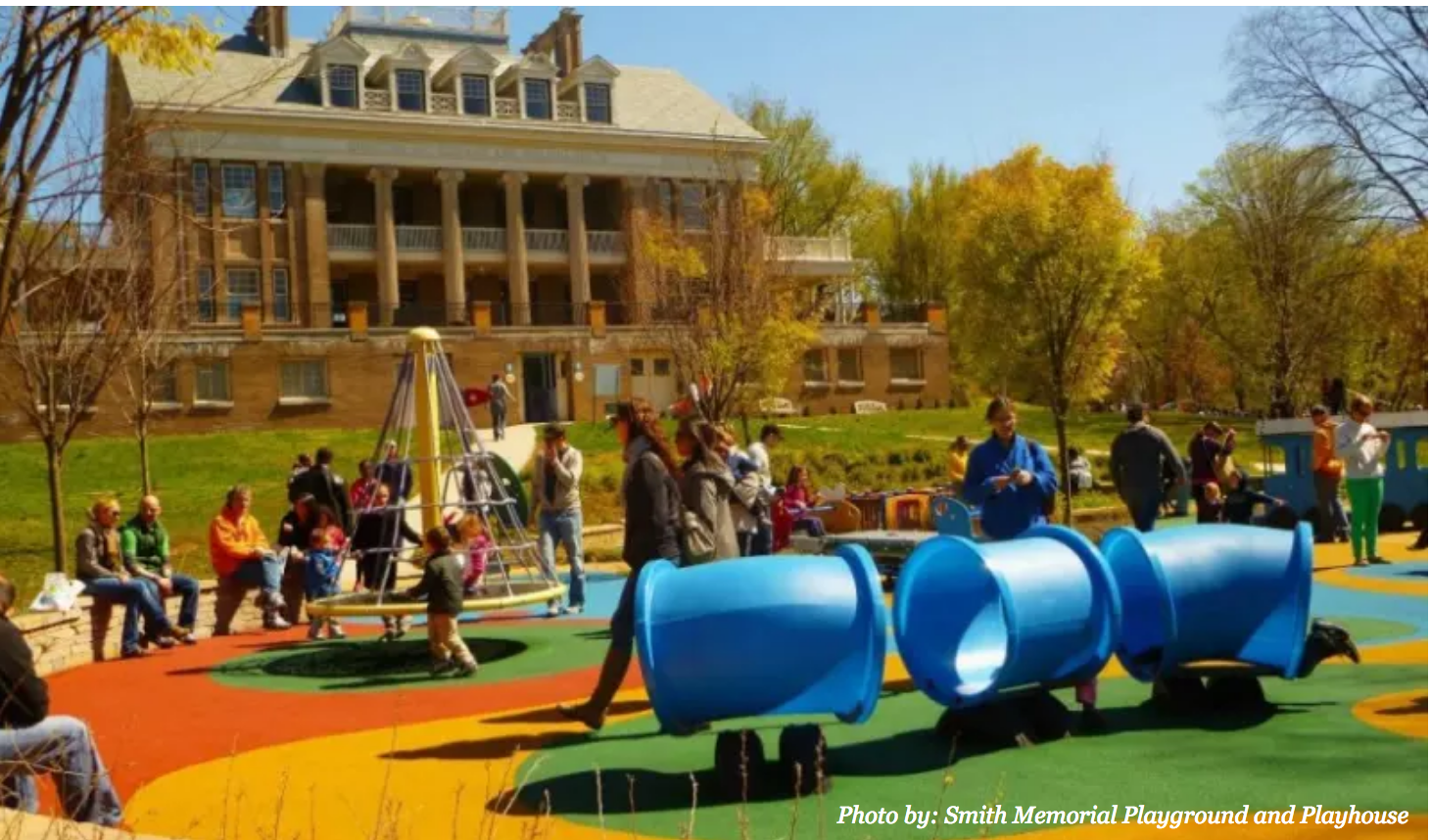 No matter what, kids love to play. And if it’s in a historic spot, all the better. But these spaces take a lot of elbow grease and creative fundraising to remain safe and in repair. Transformation of an historical building into a child’s fun/learning zone takes even more.
Philadelphia’s kid-friendly, history-steeped playgrounds are Franklin Square, a once a neglected magnet for the homeless that boasts a sparkling carousel and a mini-golf homage to the city’s history; Victorian-era Smith Memorial Playground & Playhouse which underwent a multi-stage restoration, including that of a much-loved treasure, the giant slide; and Please Touch Museum, the nation’s first children’s museum in Memorial Hall, originally the Art Pavilion during the 1876 Centennial Exhibition.
FRANKLIN SQUARE
It may have been one of the three remaining green space squares that founding father William Penn designed for Philadelphia in the 1700s, but that didn’t mean it was always treated like an historic gem.
“Daycare workers used to clean away the drug paraphenalia in Franklin Square every morning before letting their charges use the playground,” says Amy Needle, CEO of Historic Philadelphia Inc.,founded in 1994 to promote tourism. Needle’s group, along with Fairmount Parks, is responsible for the 7.5-acre square’s rebirth.
Reopened in 2006, the square, which is a few blocks from Independence Mall at 6th and Race Streets, cost $6.5 million to renovate. It’s star attractions are a carousel painted with Philly scenes including boathouse row, a mini-golf game that features music by homegrown stars such as Patti Labelle, and food vendors with brotherly love staples such as soft pretzels. 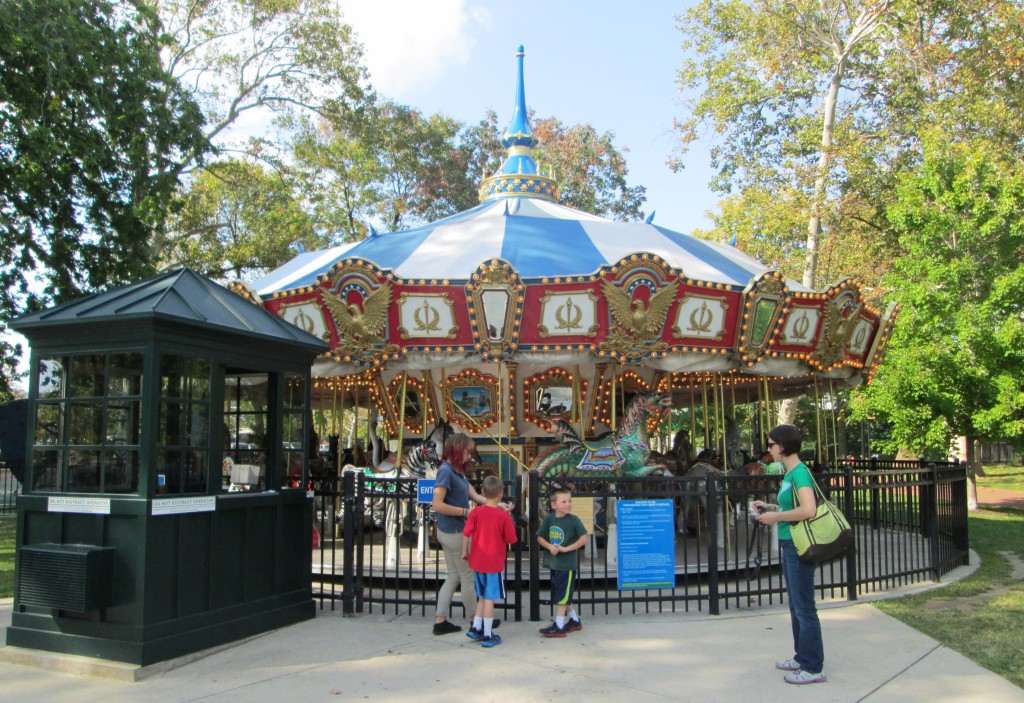 The inclusion of Philadelphia Park Liberty Carousel, 36 feet in diameter and outfitted with 30 carved figures (including a sea dragon and eagle), is fitting since Philadelphia was once the carousel-making capital of the world. In the mid-19th century it was home to three manufacturers, Philadelphia Toboggan Company, Dentzel Carousel Company of Philadelphia and D.C. Mueller & Bro. The carousel in the square today was made by Chance Morgan Co. in Wichita, Ka., using original moulds from the Dentzel Carousel Company and Philadelphia Toboggan Company.
SMITH MEMORIAL PLAYGROUND & PLAYHOUSE
Deep in East Fairmount Park is an imposing three-story Beaux-Arts mansion, built just for kids. Designed by architect James H. Windrim at the height of the late nineteenth century Play Movement, the 24,000-square-foot Playhouse opened in 1899 and has remained open ever since. 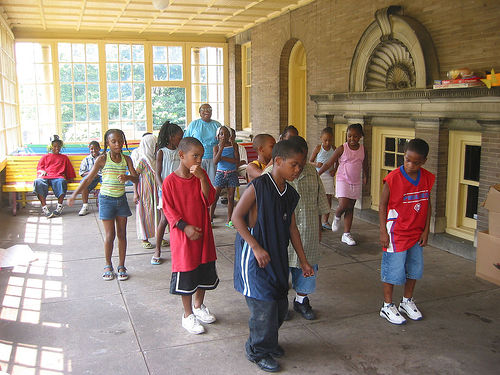 Outside on the Playground’s six-and-a-half acres, is the Giant Wooden Slide —a 40-foot-long, 12-foot-wide, 10-foot-high covered maple slide that was installed in 1905 and fits up to twelve children abreast. 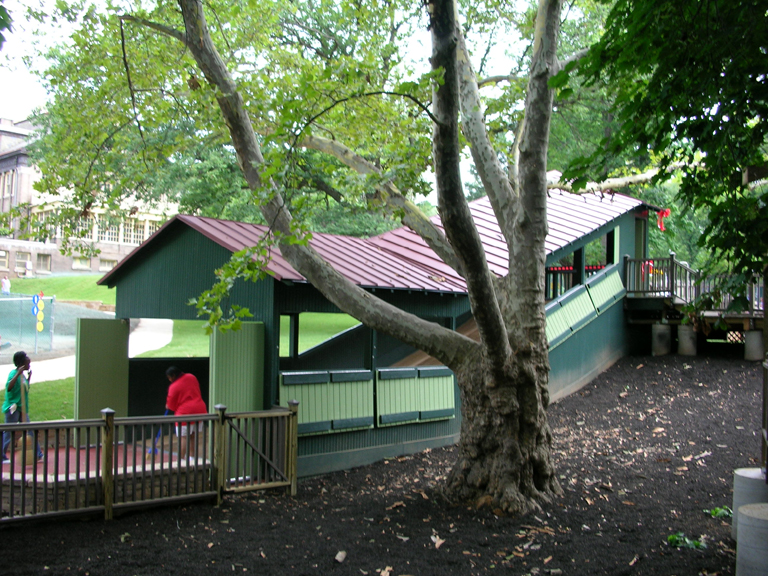 “The slide is one of the most unique sights I’ve ever known. There has been an enormous affection for it for generations,” notes Hope Zoss, the site’s executive director.
In 2003, the Playground closed due to the equipment not being up to safety standards. With the help of a donation of $325,000 from a 92-year-old donor who had fond memories of the slide as a child, upgrades were made and it reopened in 2005, bearing her daughter’s name, the Ann Newman Giant Wooden Slide.The second phase of improvement took place the following year with the installation of 18 swings. The Playhouse, which is aimed primarily at the under-five set, offers indoor activities such as riding tricycles through a child-sized “town,” and a puppet show theatre.
Richard and Sarah Smith (he was a wealthy Philadelphian who made his money in typesetting) built the site as a memorial to their son and as a country play haven for inner-city children. Since opening, it has drawn up to 1,000 visitors a day, from every income level. In 1977 it was listed on the City Historic Register.
Zoss notes that the Richard and Sarah Smith Trust of “two million dollars” is used for day-to-day operations and the funds for the improvements, estimated at “$10 million dollars,” are being raised through “individuals, foundations corporations and government agencies.”
MEMORIAL HALL PLEASE TOUCH MUSEUM
Memorial Hall, built for the 1876 Centennial Exhibition in West Fairmount Park after its inception as an Art Pavilion, served a few purposes, including headquarters for the Fairmount Park Commission. Its new role as the Please Touch Museum is far more playful. 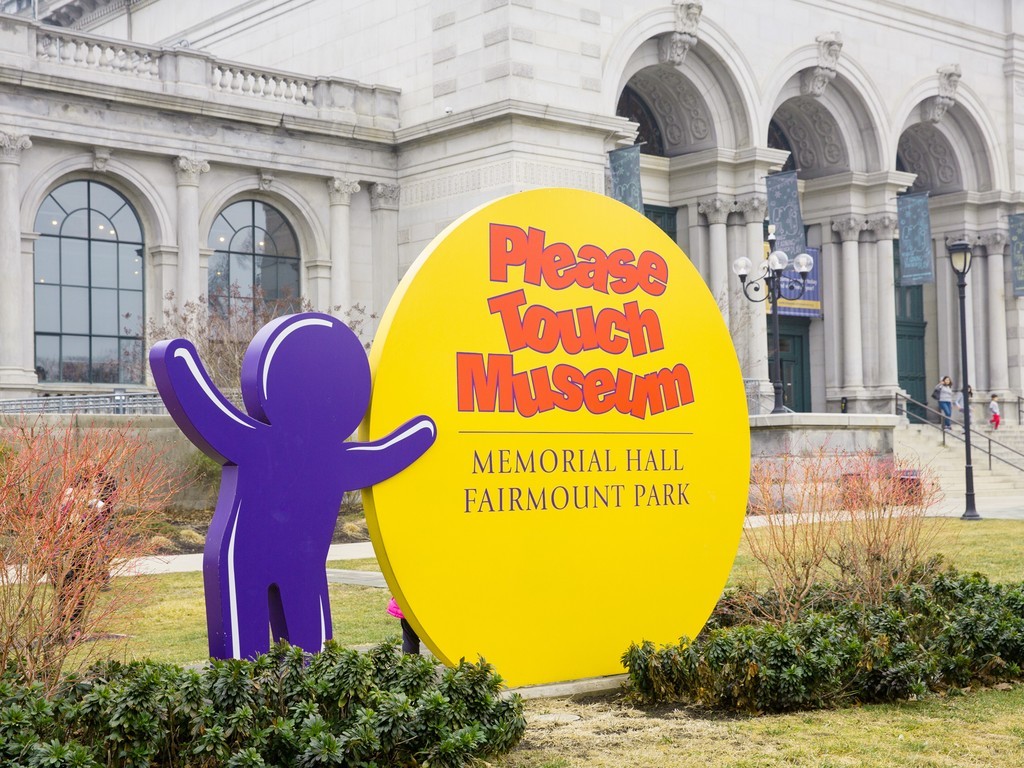 The Beaux-arts building reopened in 2008 with 135,000 square feet of exhibits including a 40-foot high replica of the Statue of Liberty arm and torch created by artist Leo Sewell out of toys (the statue’s original arm and torch graced the 1876 exhibit), and a 1924 Dentzel Carousel Company of Philadelphia carousel, on loan from the Pennsylvania Historical and Museum Commission. Originally, the carousel operated at Woodside Park, less than 10 blocks away. Additional exhibits include a flight fantasy area with propeller bike and flying machine and Alice’s Adventures in Wonderland with rabbit hole slide. Plus, there are other hands-on displays of inventions unveiled at the 1876 fair such as the typewriter and root beer.
Memorial Hall, a National Historic Landmark, was renovated according to standards set by the Secretary of the U.S. Department of the Interior. Of the museum’s $88 million budget (raised through government, individuals and corporations), $40 million went into building upgrades such as new windows. Much of the renovation involved removal of 1950s intrusions such as dropped ceilings.
“It was in good shape structurally when we got it. The soaring atrium is 150 feet tall and was concealed by walls that had been put in,” explains Willard Whitson, the museum’s vice president, exhibits and education. The decorative filigree and statuary uncovered around the atrium dome are in “wonderful condition,” says Whitson.
It’s a happy fact that history, when preserved and sprinkled with imagination, can deliver a whole lot of fun and learning for kids and adults alike. Technology might be making advances at the speed of sound, but Philly’s historic play havens prove that old fashion fun still has power for today’s kids.

This entry was posted in Destinations and tagged Philadelphia. Bookmark the permalink.