Posted on January 17, 2019 | Comments Off on Munching my way Through Chinatown & Kensington Market 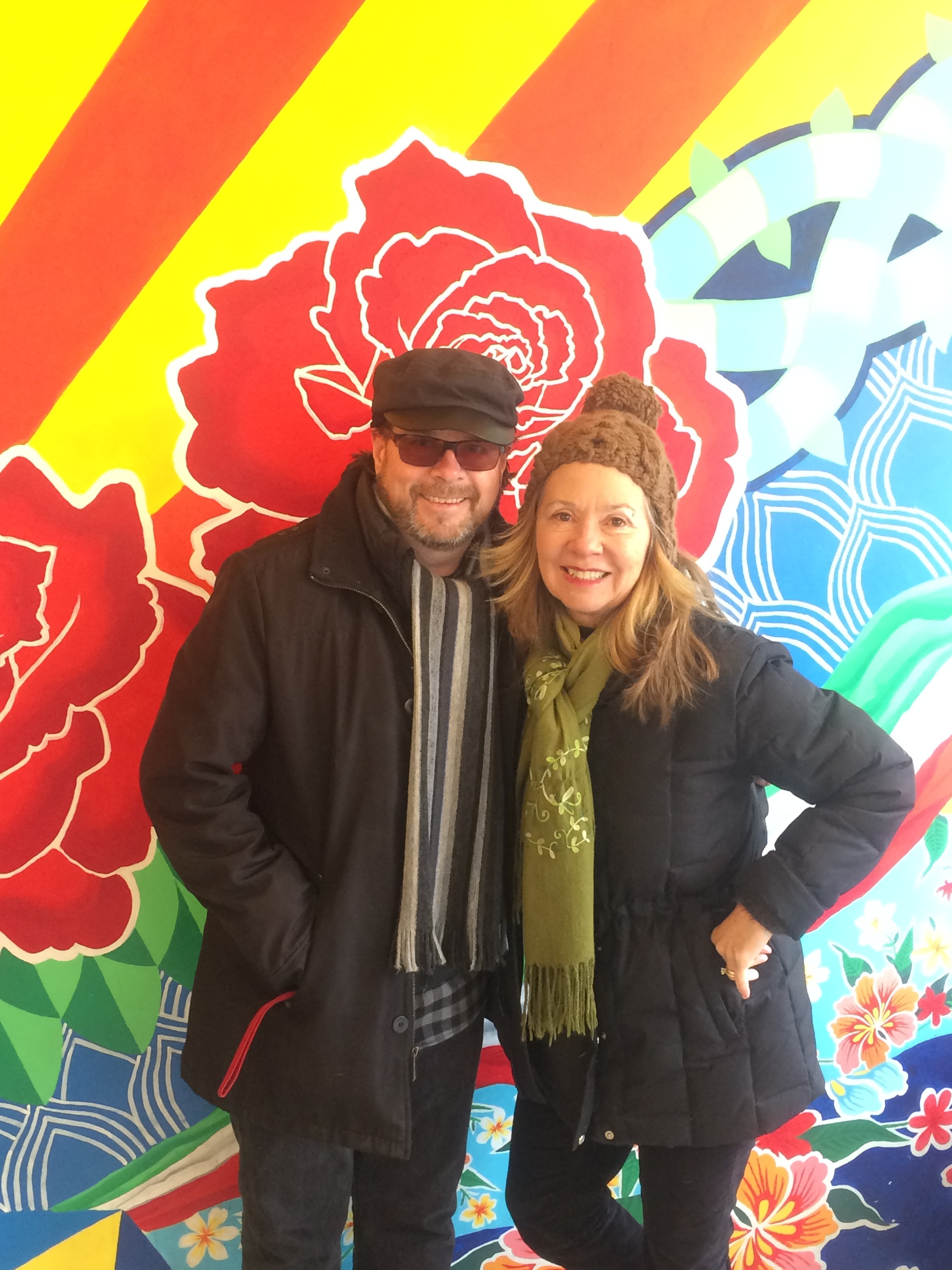 It was a cold morning in early January, but that didn’t stop us. My husband and I bundled up and headed out to Spadina Ave. and Dundas Street. This colourful area has been a draw for me ever since I was in university. Coconut buns, egg tarts, cheeses of the world, fruits, spices and funky boutiques. I have always loved it, but lately I haven’t spent much time down in Toronto’s Chinatown/Kensington Market area and I thought what better way to get acquainted with all that was new and delicious than take a three-hour food tour? I had been on one in the city’s east end with Culinary Adventure Co. in the fall, so we decided to try them again. And Forbes Magazine has called this one “one of the best food tours in the world.” You can’t buy endorsements like that. 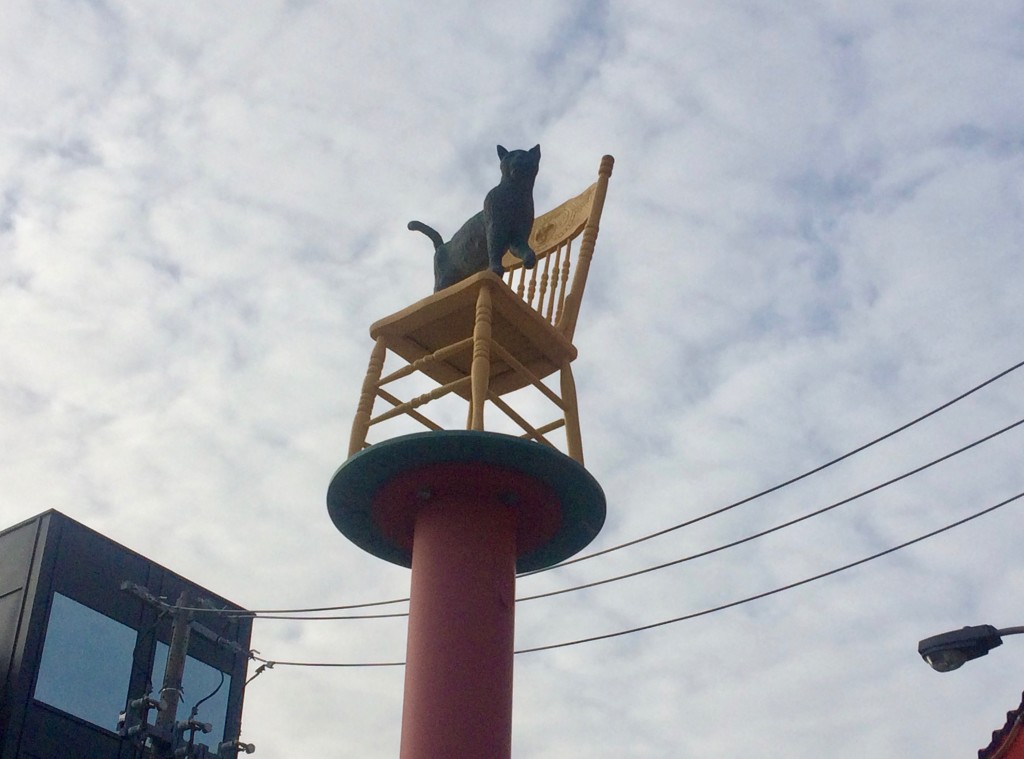 Our guide, Daniel G., met us under the yellow chair, topped with a waving cat. It’s one of the art installments along this stretch of Spadina. In China the cat waving its left paw is a sign of welcome. Aha! That’s why Asian shops always have those waving kitty figures in their front windows. “Back at the turn of the last century, Kensington Market was filled with fish mongers…and feral cats,” Daniel explained, noting the two neighbourhoods are intrinsically tied. 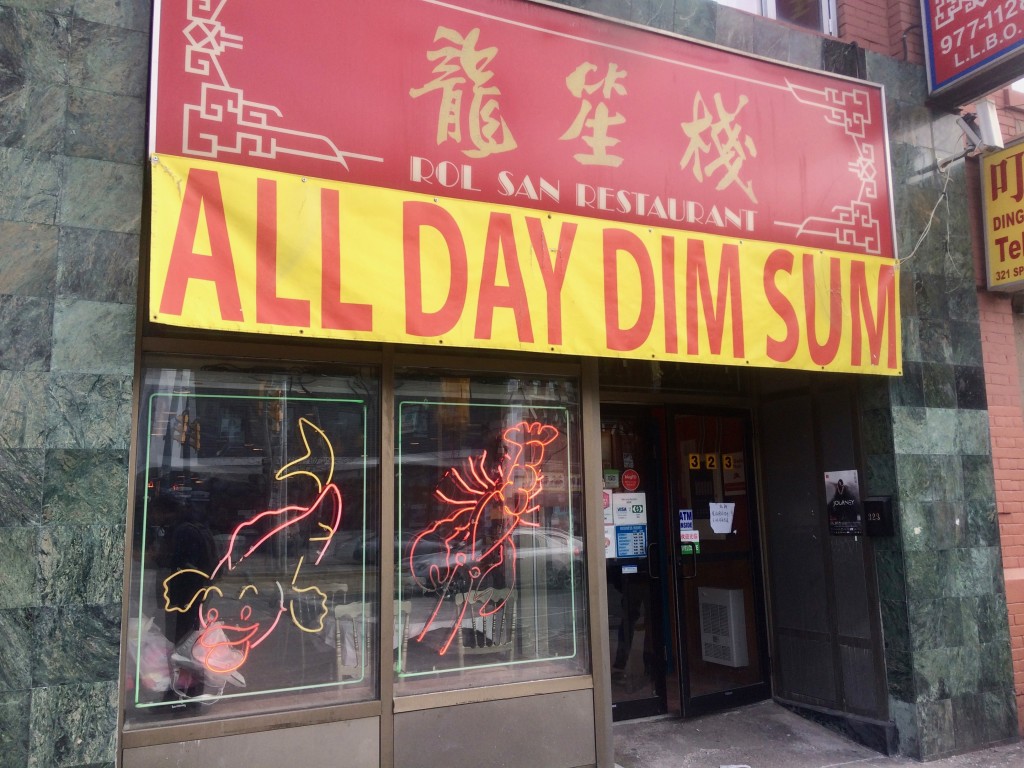 Crossing the street, we headed into Rol San, a restaurant with a huge exterior banner stating that it serves dim sum all day long. I had actually been here before, but today the dishes we tried were all new to me. Sitting at a table draped in white plastic (for easy clean up, the waiters just lift the whole thing, dishes included and whisk it to the back), we went through the yellow paper menu. Bottomless jasmine tea was $1 per person. The small plate dishes ranged from $4-5. Daniel told us the family-run business had opened in 1994 and in 1999 it became an all day dim sum spot, now open from 9 a.m.-2 a.m. “It’s the go to place to sober up late at night,” he joked. 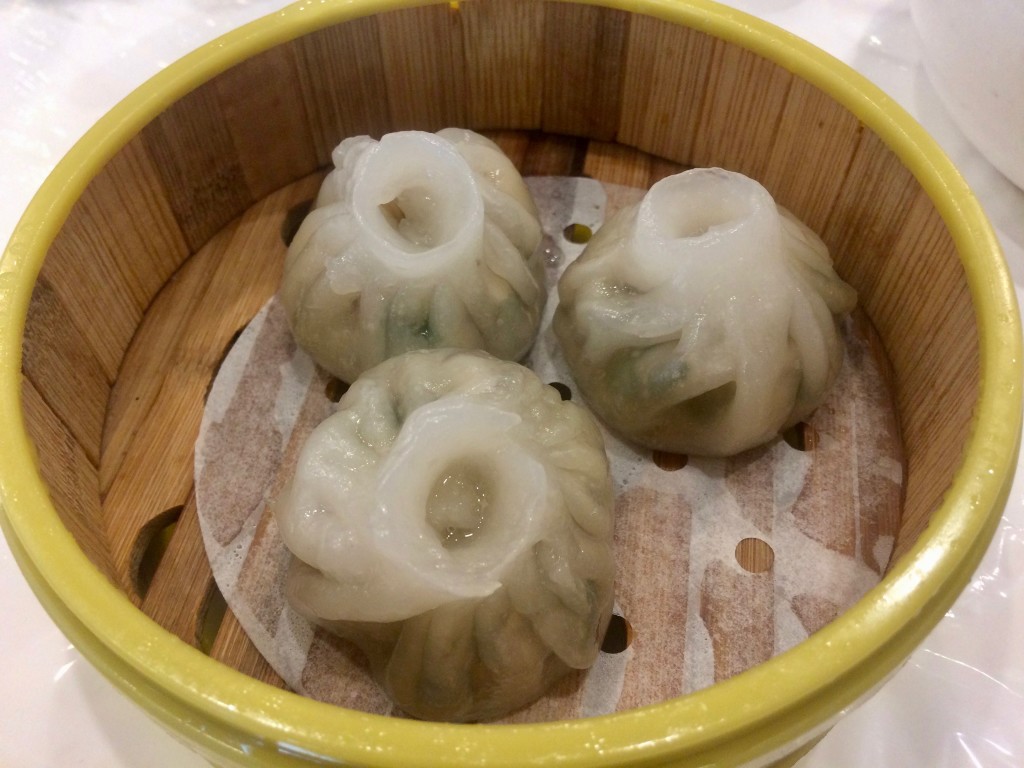 First to the table was the bamboo fungus with mixed mushrooms dumpling. Delicious, especially when dipped into the hot, homemade chili sauce that graced every table. The next three dishes came at once. 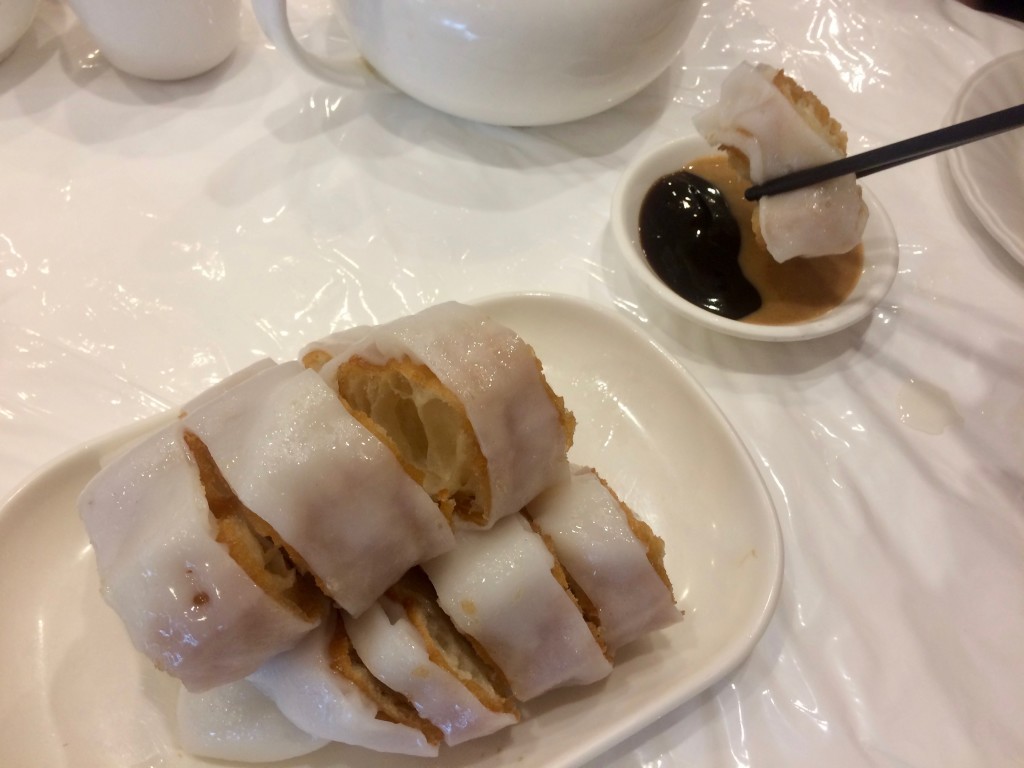 Rice rolls with Chinese donut – a deep fried donut wrapped in gooey rice roll that we dipped into a mixture of spicy, sweet hoisin sauce and peanut sauce. I probably should have saved that for last. 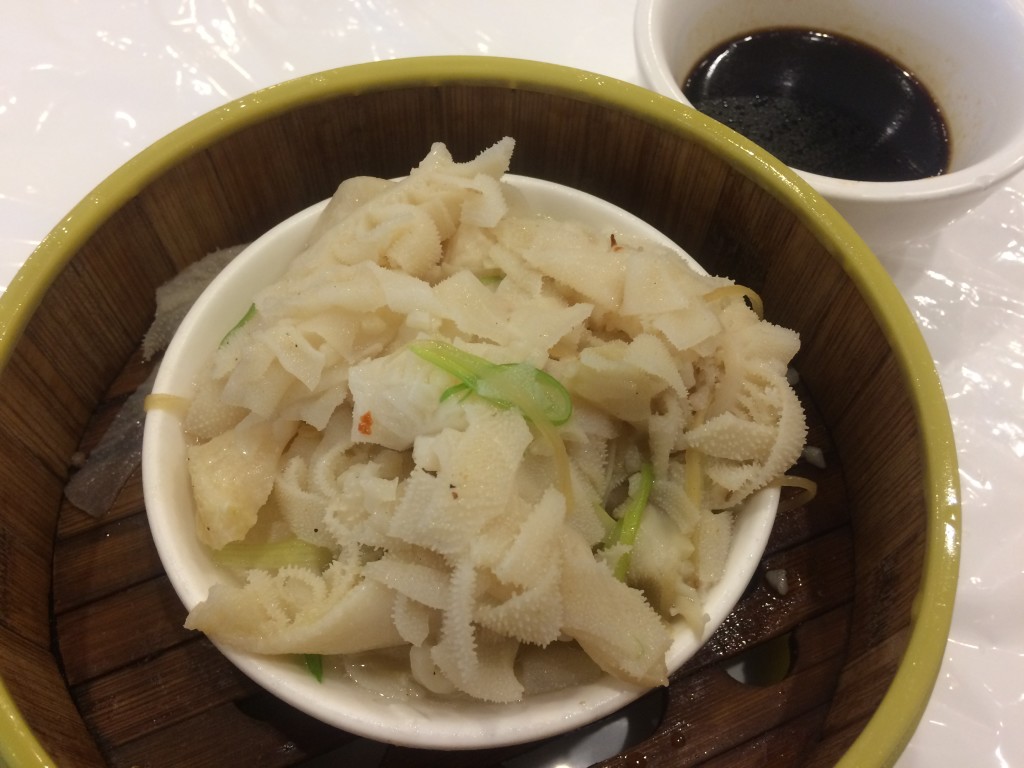 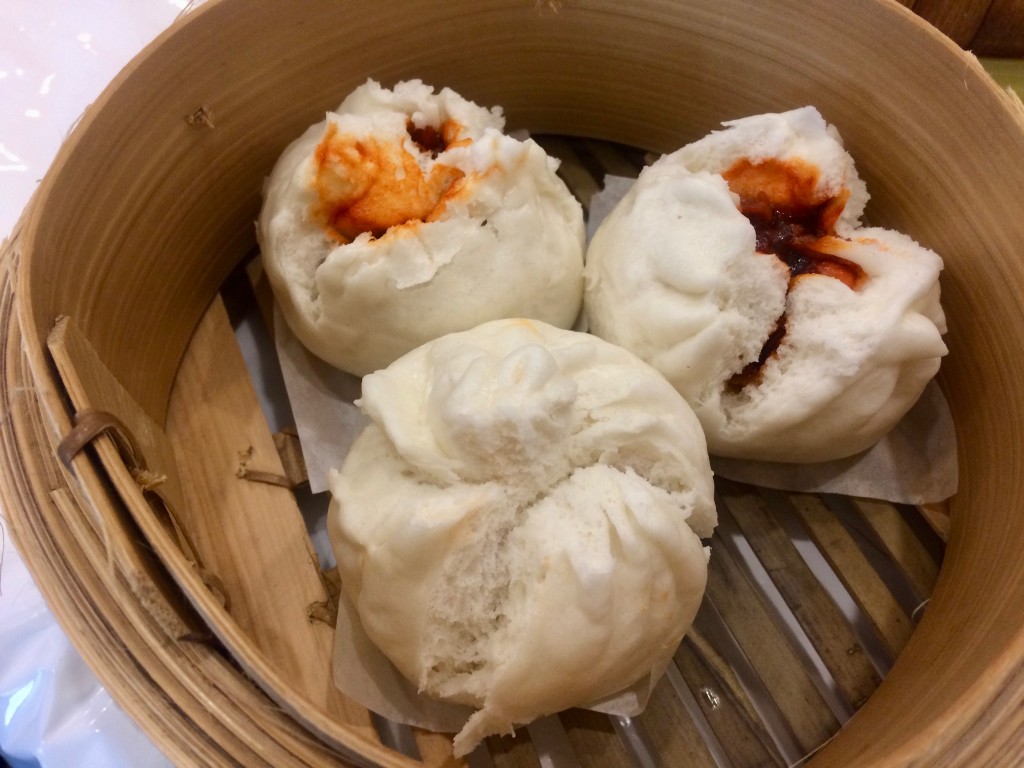 The pork buns were puffy and filled with a sweetish pork mixture. 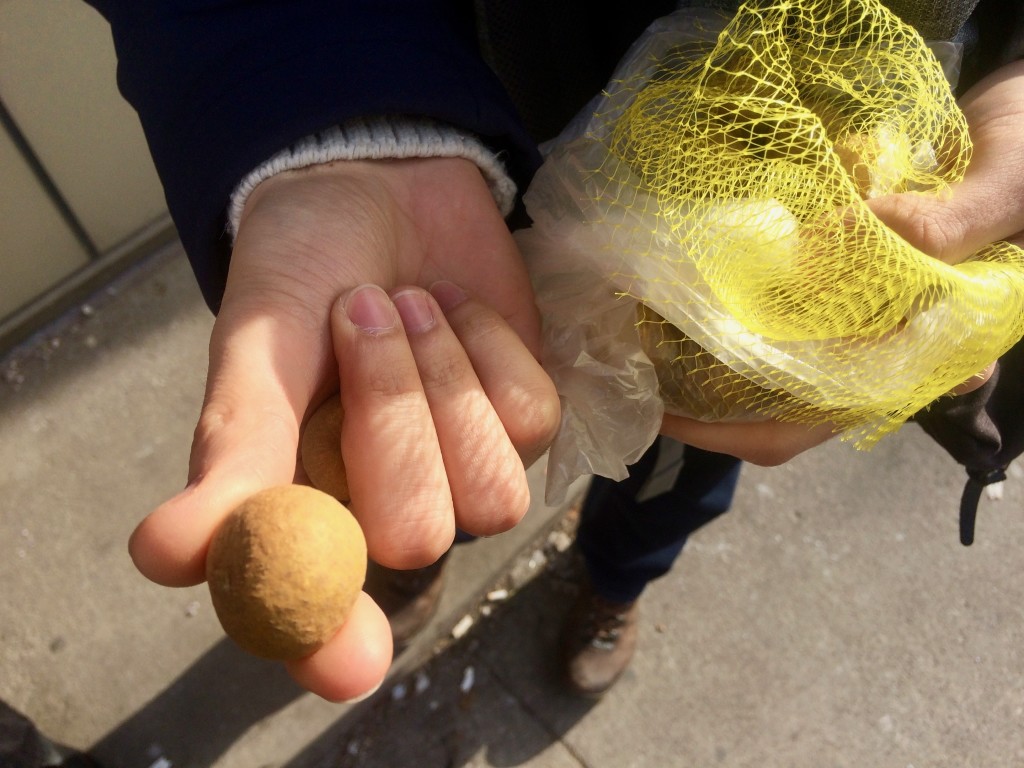 As we departed, Daniel treated us to some longan fruit. About the size of a grape, he told us to peel it and be careful of the hard seed in the middle. As I bit in, the flesh reminded me of lychee, but the flavour was more like a plum. “The name translates to ‘dragon eye,’” he said motioning to the fruit stand we were now standing in front of. “You can pick them up here, one of the oldest produce stores in Chinatown.”
This was just the start. We had three more restaurants to visit, plus some other little nibbles along the way. I knew I had better start pacing myself. 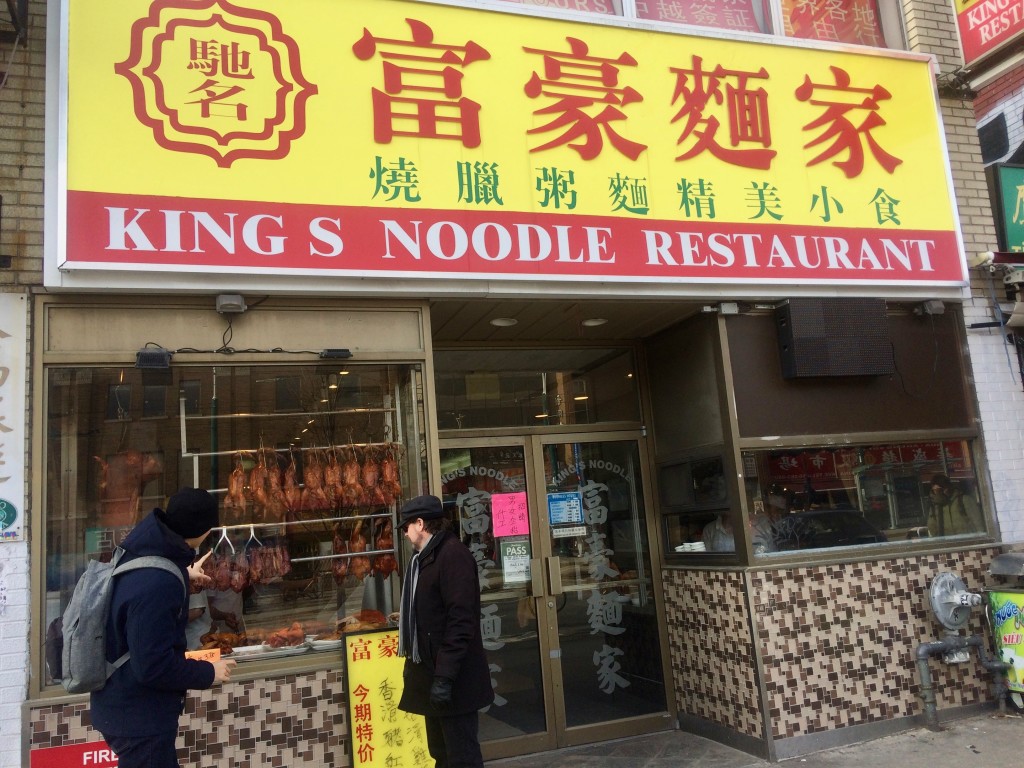 King’s Noodle, also on Spadina, specialized in BBQ pork and duck. They proudly use every part of the animal and we peered in the window at a pig’s head, and many hanging ducks, wizened and reddish with barbequing. “Stanley and Grandee Lee are the owners and the restaurant opened in 1984,” Daniel told us. Stan had been a chef in a hotel in China before he came to Canada, but the hotel specialized in western food. Now he and his wife serve multi-generations of clients with Cantonese dishes such as congee with ginger, onion and BBQ pork. 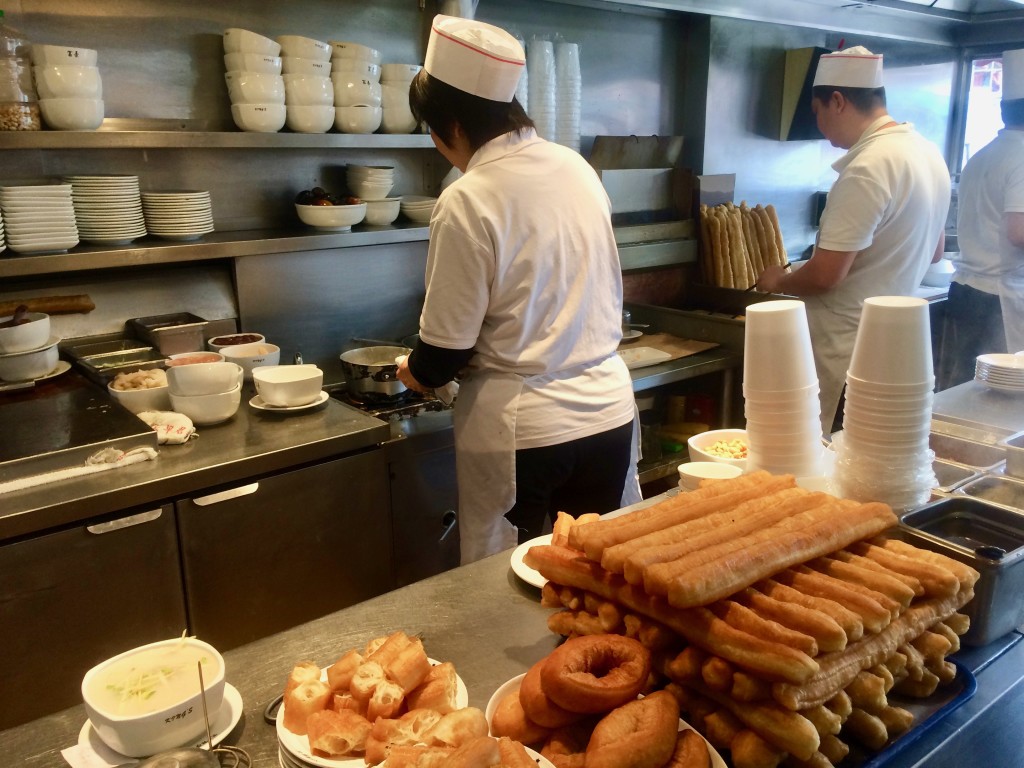 The pork, Daniel explained, was marinated, then cooked slow and low for hours, giving it a caramelized coating. 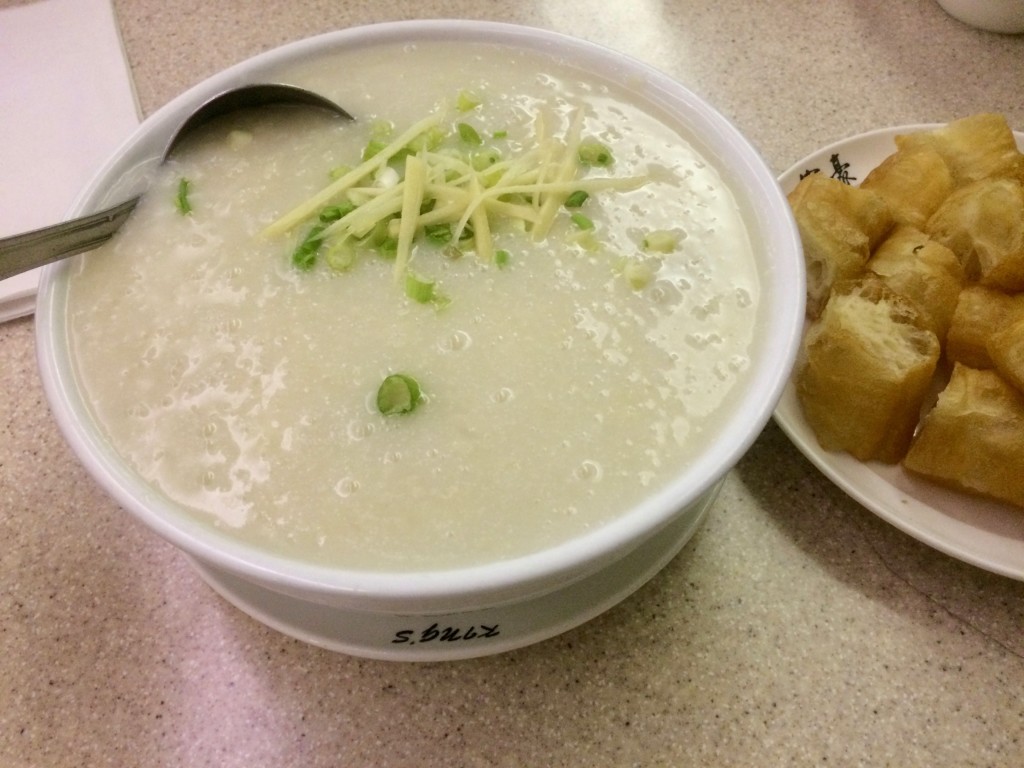 We filled our bowls with the congee, a soupy rice porridge and dove in with our chopsticks for succulent pieces of pork. I loved how the chili oil here had a smoky flavour and blended beautifully with the congee. We also sipped an earthy black Chinese tea and dipped squares of deep-fried bread into our bowls to complete the taste experience.
Walking up to Kensington a few blocks away, Daniel stopped and pulled out a White Rabbit. 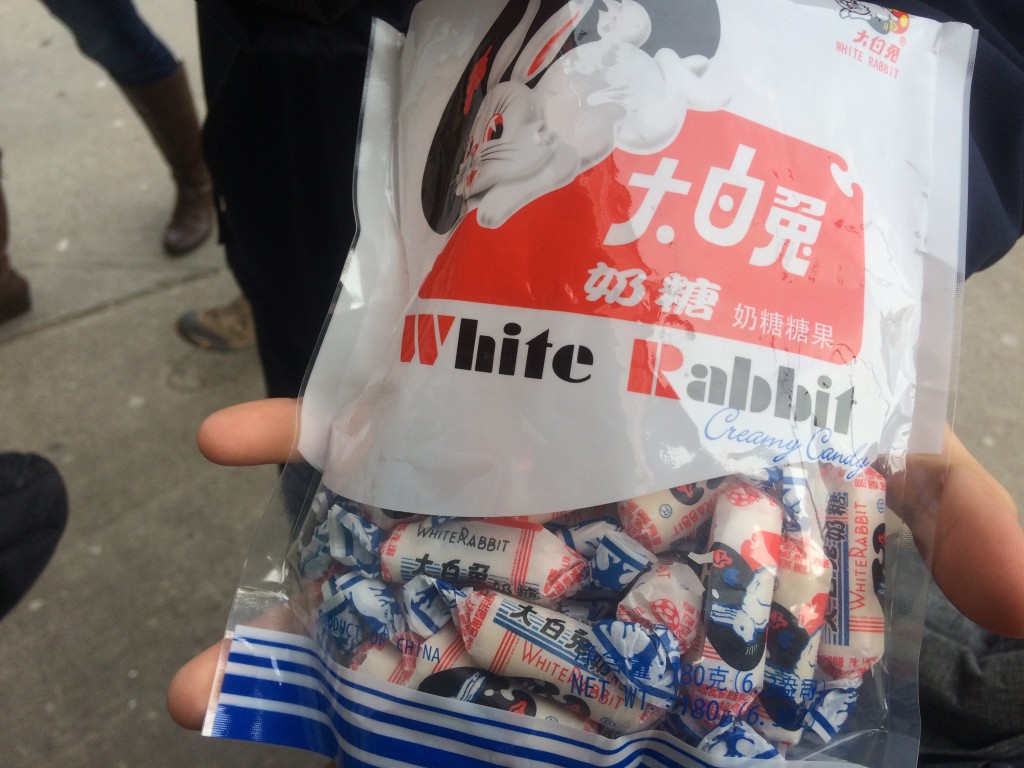 White Rabbits are Chinese sweets and he had a bag full. We sucked on the mild, vanilla flavoured treats as he told us about Kensington Market. 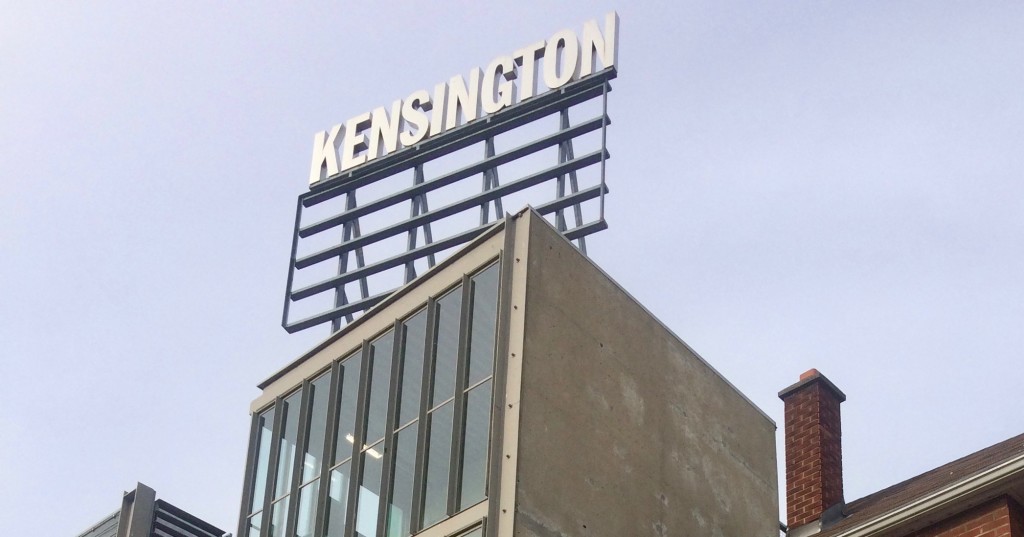 The history goes back to 1815 when George Taylor Denison had an estate on a 100-acre piece of land just west of Spadina Avenue. Eventually the land was divided into plots sold to British and Irish immigrants in the 1850s and 1860s. In the early 1900s came an influx of Eastern European immigrants and many of the Jewish families built outdoor stalls in front of their homes turning the area into an outdoor, old-world style marketplace. That trend has continued and today the area is very diverse, perhaps the latest immigrants to populate the shops are from the Caribbean and South America. The people here are fiercely independent and you won’t see any chain stores. “Sobey’s was going to open an outlet, but when they put up their sign, the residents rebelled and threw eggs at it,” Daniel recalled. 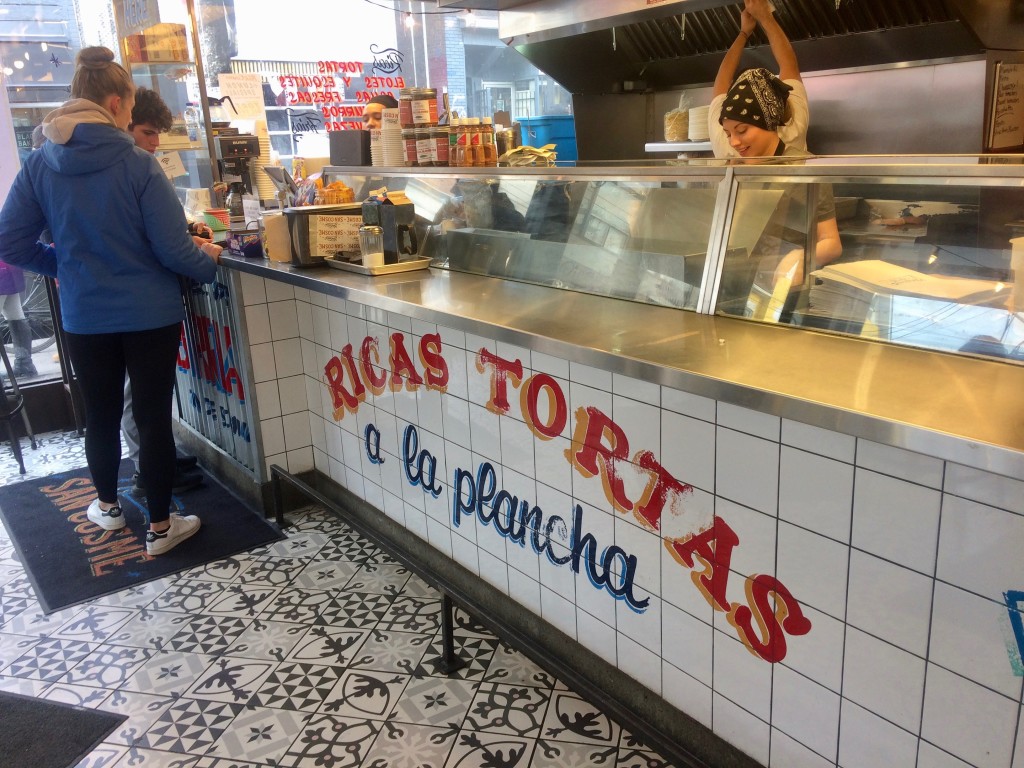 Across from Global Cheese on Kensington Avenue at the corner of Baldwin Street was a Mexican torteria called San Cosme. This was brand new to me. We sidled up to one of the high stools at a communal table and Daniel headed to the counter, returning shortly with a sweet, creamy rice drink with a hint of cinnamon called horchata and a huge veggie sandwich called a De Nopales, that sells for $9.95. 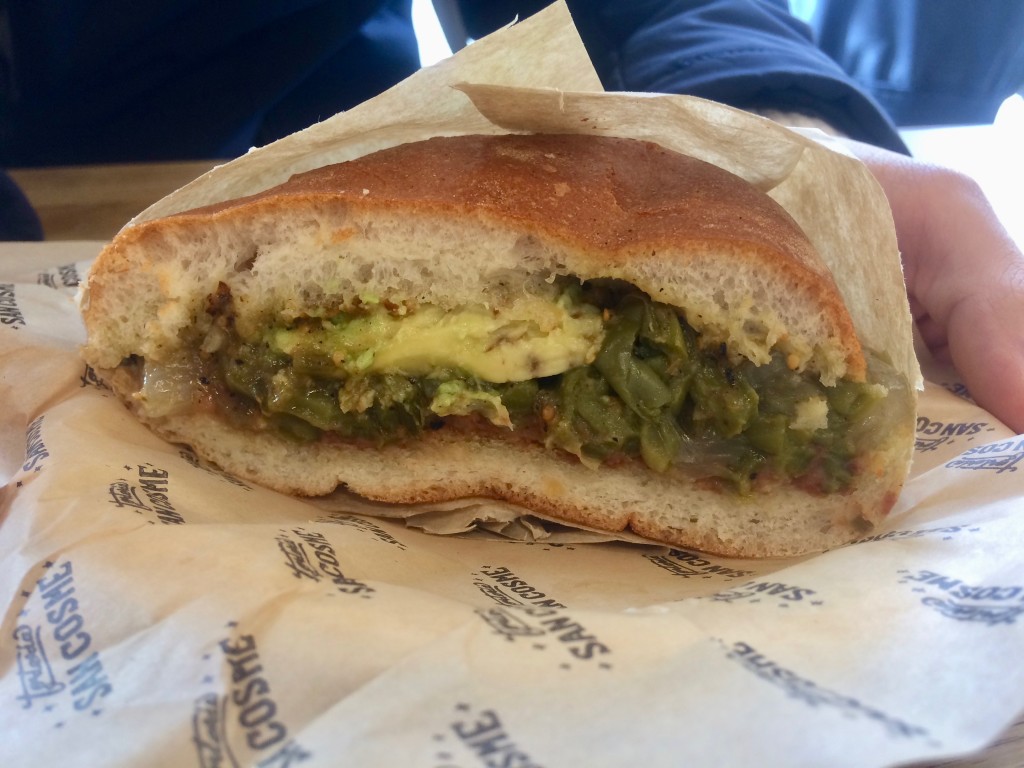 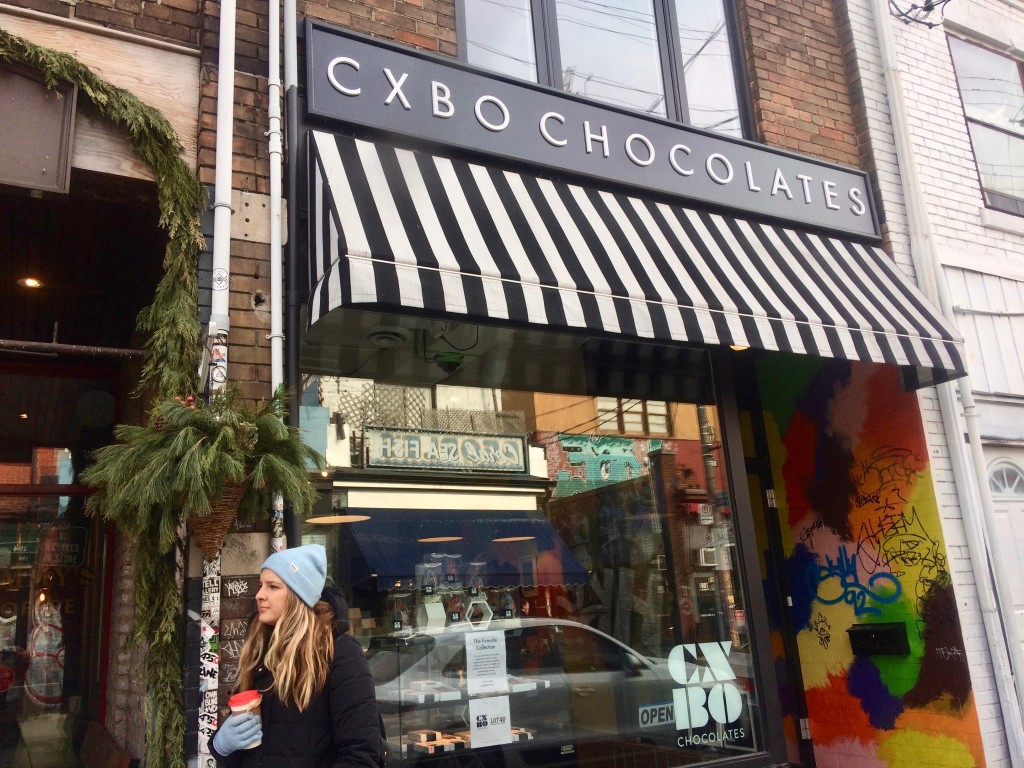 Walking along Baldwin, we came upon a jewel box of a store called CXBO Chocolates. 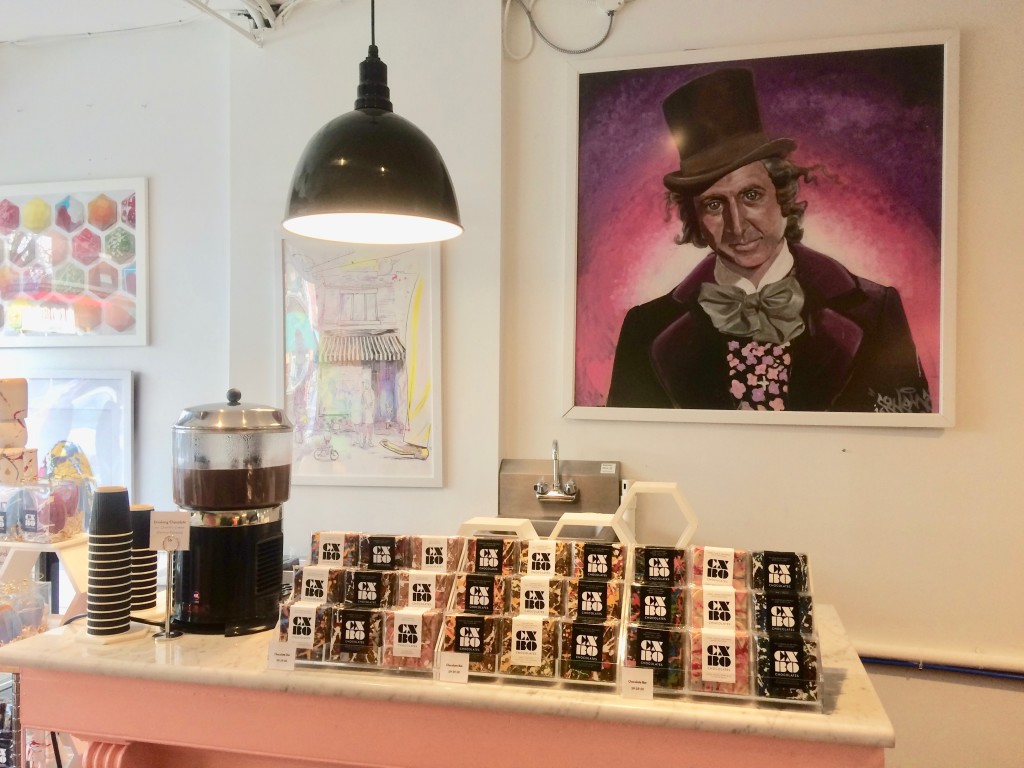 Entering, a portrait of Willy Wonka greeted us, along with a case of the most divine looking art pieces. Well, they were actually chocolates. Daniel had us each pick one. 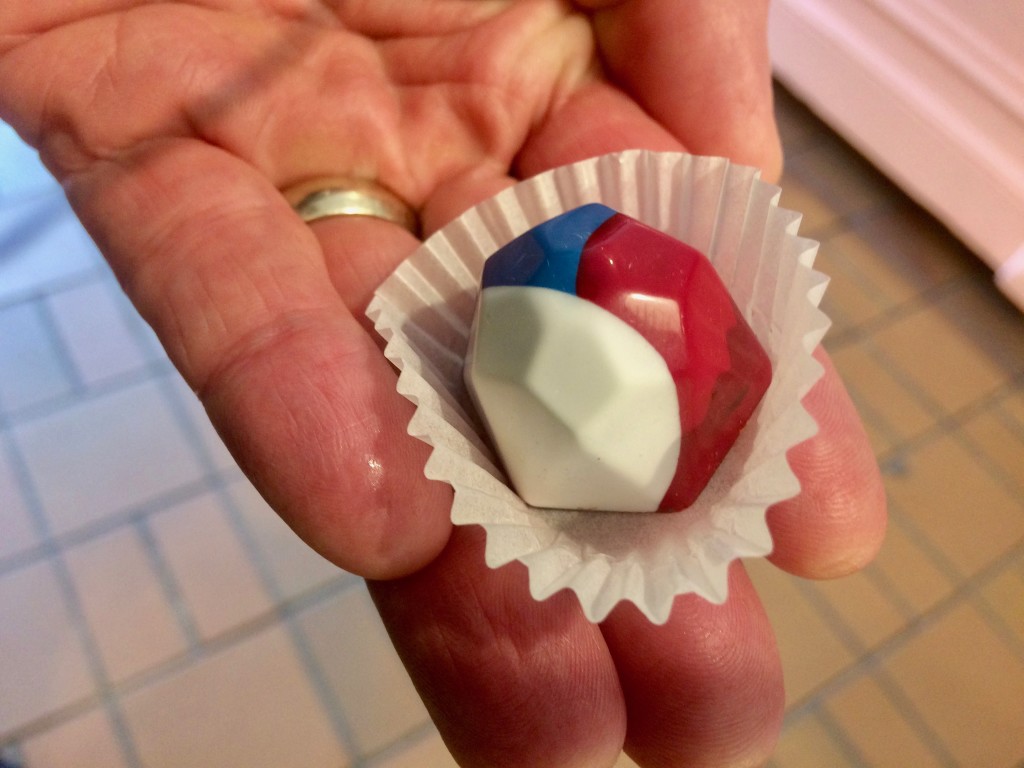 I went for a dark chocolate salted caramel (their most popular) while my husband opted for a milk chocolate with sherry. The handmade collection was created in 2015 by chef Brandon Olsen and artist/filmmaker Sarah Keenlyside. “In 2017, they opened Restaurant La Banane, named Canada’s Best New Restaurant in 2017,” said Daniel. I noticed on the counter was a huge chocolate egg covered in splatters of edible colour. The Ziggy Stardust Disco Egg is served at La Banane and has been frequently called the “most Instagrammable dessert,” the counter clerk told us. Decadent! Not sure how much it costs at the restaurant (in another part of town, on Ossington Avenue) but at the shop it was $50. I was more than satisfied with my salted caramel and found out that a box of 9 cost $22.50. They also had a selection of bars for $9 (the Kensington Bar has apricots, chili and coffee) that I wouldn’t mind trying next time. 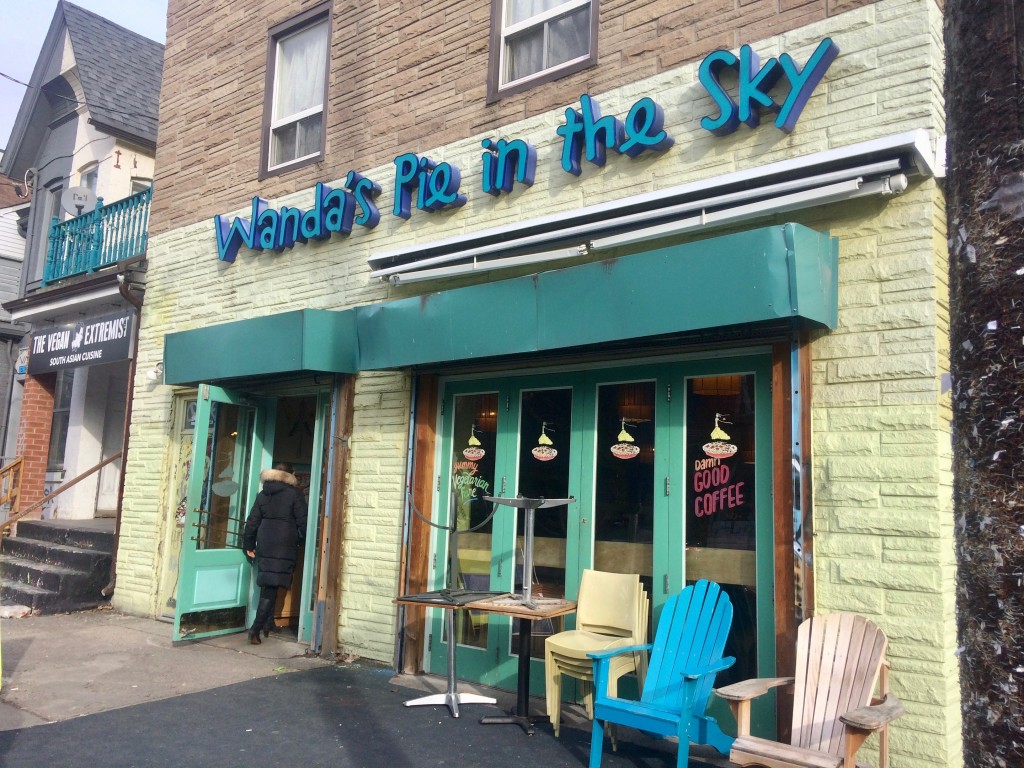 With just a tiny slice of room left, we headed to Wanda’s Pie in the Sky, a funky bakery café around the corner on Augusta Avenue. 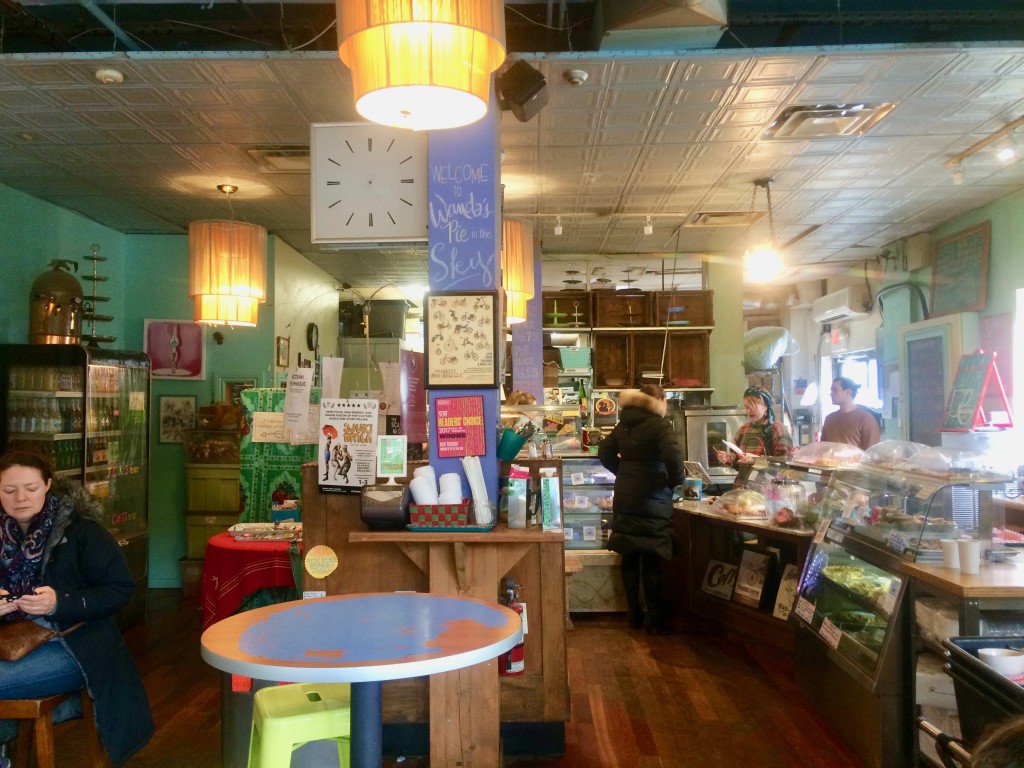 Inside it was strictly old school with hardwood floor and glass case after glass case filled with savouries, cakes, pies and cookies. We were there for the pie. “Wanda Beaver started out making sour cherry pies, using fruit from her family’s small orchard when she was a child. As an adult, she began baking for consumers at a location in Etobicoke, but she’s since moved to Kensington Market,” said Daniel. 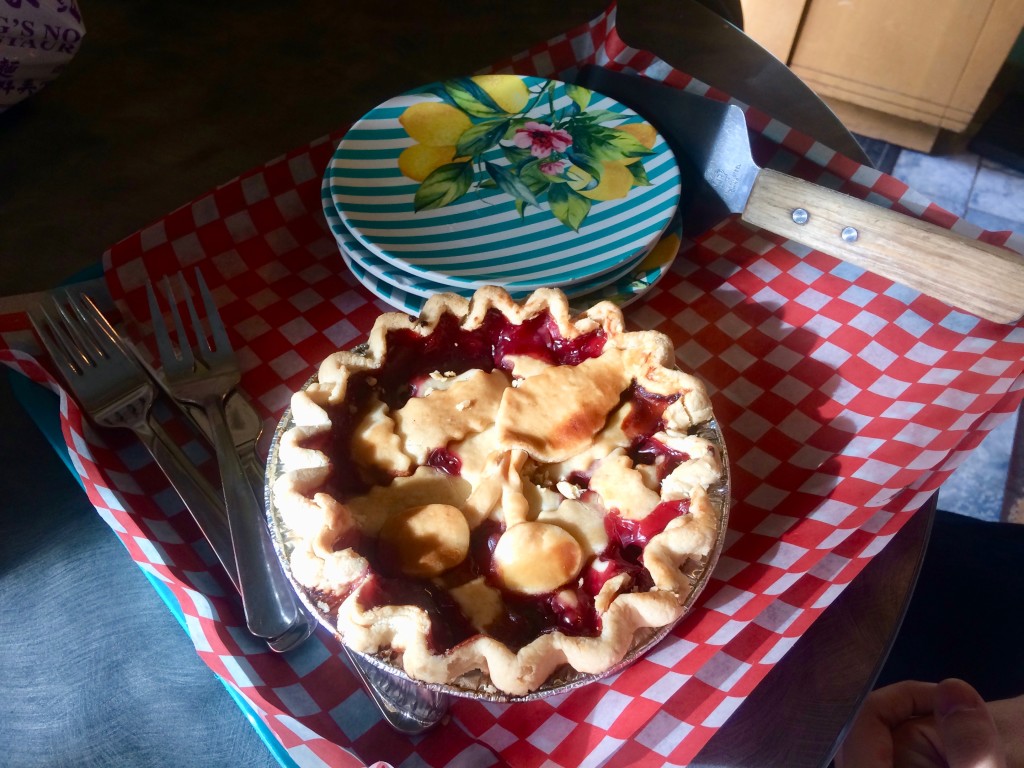 He had brought a tray over with a small Ontario sour cherry pie and three plates. “I’m a sweets guy. This is my favourite item on the menu here,” he continued. We divided up the flaky pastry and juicy fruit and I took a bite. OMG. The crust was slightly sweet with a hint of almond. The sour cherries were floating in a bath of delicious sweet-tart goodness. What a note to go out on!
Culinary Adventure Co. offers tours in Ottawa, Toronto and Winnipeg year round and from June until end of September in Charlottetown, Kingston and Halifax. In Toronto they offer King + Queen St. W. brunch, St. Lawrence Market, Leslieville/Riverside and Kensington Market/Made in Canada, and Escape the City Canoe Paddle + Dining Adventure tours in addition to Chinatown/Kensington Market. Maximum number of people is 12 and costs start at $80 per person.

This entry was posted in Destinations and tagged Chinatown, Kensington Market, Toronto. Bookmark the permalink.