All Tabloids Are Alike! 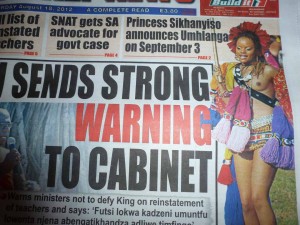 The Swazi News had the most captivating cover today.

Every day I try and read the newspaper. There are two main papers, the Swazi Times and the Swaziland Observer. Plus there are others like the one pictured – Swazi News. They are all quite similar, but the Observer is run by the government and tends to be a little more conservative. Part of my job at SWAGAA is to go through the newspapers and circle stories of gender-based violence. But on the weekend, I’m free to ponder over all the journalistic wonders I can devour. There’s no denying the Swazi News gets thumbs up for most captivating cover this weekend. The young lady pictured is no other than Princess Sikhanyiso, King Mswati’s daughter. She recently announced the dates for this year’s Reed Dance, or Umhulanga. The picture is from last year’s Reed Dance. What the heck is a Reed Dance? It’s a huge celebration, where thousands of young Swazi “maidens” gather for three days to cut reeds that are given to the Queen Mother for her roof, and later they dance for the King. It’s very traditional, and one year the King picked one of the maidens for his wife (he has  14, but rumor has it one or two may have left the royal household). The Reed Dance celebration starts on September the 1st and I am going. SWAGAA actually does some outreach work with some of the girls. I can’t wait. It is supposed to be beautiful. And you can bet all the guys love it.                                                         Here are some other bits from the news:

A typical caption under photos: “The people in this picture have nothing to do with the story.”

Canada got in the news today! We are one of the countries around the world that allow inmates conjugal rights.  The story was about the fact that prisoners will be allowed two hours of free time to enjoy conjugal rights with their spouses. Here’s an excerpt:  The house will be called a guesthouse and inmates will have to make bookings in advance to use it. Warders who normally guard them would stand outside the house and only knock when time was up for the cozy couple. Bedding which includes sheets and pillow covers will be changed after each use of the facility.”

Some of the day’s headlines…

DRIVERS SHOULD PRAY BEFORE DRIVING – As a means of reducing the number of accidents on the country’s roads drivers of public transports have been urged to pray before driving. “Drivers should pray before touching the steering wheel so that God could protect them during the journey.”

WHEN WOMEN VOTE FOR MEN – Velisizwe Mhlanga, 33 of Ebenezer stated categorically that she did not have trust in women candidature, but was however, not forthcoming with the reason for her stance…..She preferred younger candidates because she believed a lot could be achieved by young energetic blood. “Once a person gets older chances are whatever they do could be inspired by selfish tendencies,” she said.

A small paraphrased slice from a complicated story about a teachers’ strike….The Swaziland National Association of Teachers went to Ludzidzini with two cows to thank His Majesty for his directive in solving their impass with government. (The teachers have been on strke and the Minister of Education fired all the striking teachers.) It has been quite a row. At a big meeting with the nation last week, the King said the teachers must go back to work. But the minister had fired them…It was quite a bruhaha. Now the government (Cabinet) is saying the King’s word is final. But last week it sure didn’t look that way. Hence the cows.

This entry was posted in Destinations and tagged Culture, Media, Swaziland. Bookmark the permalink.