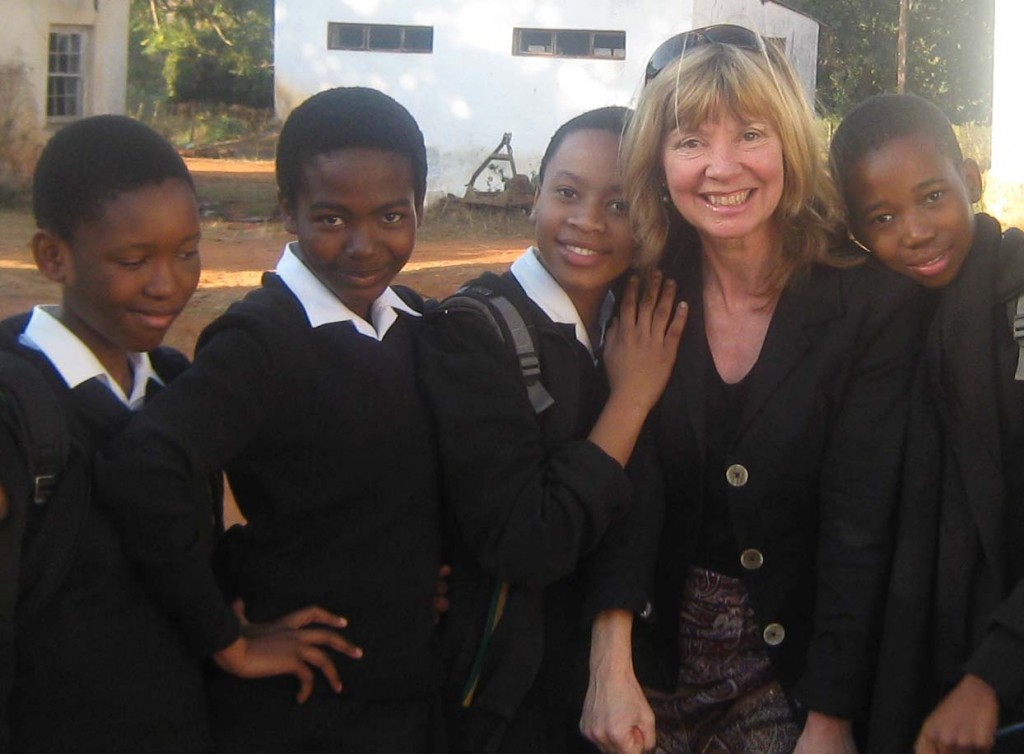 Outside the classroom after my first Girls Empowerment Club meeting.

Last week I went to my first Girls Empowerment Club meeting at Swaziland National High School in Matsapha, just outside Manzini (where I’m stationed). I went with Doreen Ngwenya, who is SWAGAA’s dynamic Girls Empowerment Coordinator, and Gina Schmidt, a social work volunteer from Germany who is working at the SWAGAA office for six months. At the entrance to the school were a statue of an elephant and a lion. “The lion symbolizes the King, and the elephant is the Queen mother,” explained Doreen. The school was big, around 2,000 students and comprised a scattering of white bungalows, a chapel and a recreation hall. We headed to a bungalow on the edge of the large property. This club had 36 members, mostly girls from forms A and B (grades nine and 10). Gina and I sat on the side and Doreen took charge, leading the girls in the opening song.  “The sky’s the limit, we’re going to be the doctors, lawyers, teachers of tomorrow,” rang out 36 exuberant voices.

There are 10 empowerment clubs throughout Swaziland, with around 400 members in total. SWAGAA started them as a preventative measure, to teach girls that they have the right to say “no” to inappropriate behaviour and “yes” to their hopes for the future. This is a tough slog in a country where one in three 13- to-18-year-old girls have been sexually abused. Where women are treated as minors, not allowed to own property, forced into marriage, physically abused and neglected. Plus there’s the fact that HIV/AIDS has afflicted one quarter of the population.

SWAGAA, which is not funded by the government, but rather by organizations such as Crossroads, has felt the economic pinch that is affecting most of its donors’ countries. Even as budgets have shrunk, staff members such as Doreen are out in the field trying to shed light on a problem that is often kept behind closed doors.

“This is a space where you are free to do whatever you want to do. Girls are so powerful and unique and you should see that in the mirror. We don’t want boys to take us for granted, so when they tell you, you are beautiful, just say, ‘Thank you for confirming what I saw in the mirror this morning,’” Doreen told the class.

The importance of keeping a journal, provided by SWAGAA, was next on the agenda. “We are going to have a competition to see who has the best one. You can talk to it, share your inner feelings and treat it like a true friend,” explained Doreen.

SWAGAA’s mandate is to eradicate gender-based violence and Doreen spent a portion of the meeting talking about abuse. “Do you know what abuse is? It can be emotional, physical and sexual. Do you know that when you are touched in your private parts you can say ‘No.’?” The girls nodded at her words, listening carefully.

A positive space to share ideas, poems and songs, the classroom bubbled with excitement when participants got up to perform. Four girls got up and did a pitch-perfect version of “We Are the World,”  which had the whole room clapping and singing along. The leader of the club announced an upcoming fundraising concert with singing, dancing and maybe even a guest appearance from a well-known Swazi performer.

To wrap the meeting, the girls shouted out the club song again. Our 45 minutes of empowerment were over, but I’m hoping to attend lots more of these uplifting gatherings. Being a girl in Swaziland is immensely challenging, but in this little incubator at this moment in time, I felt hope for these girls. It felt like the sky truly was the limit.